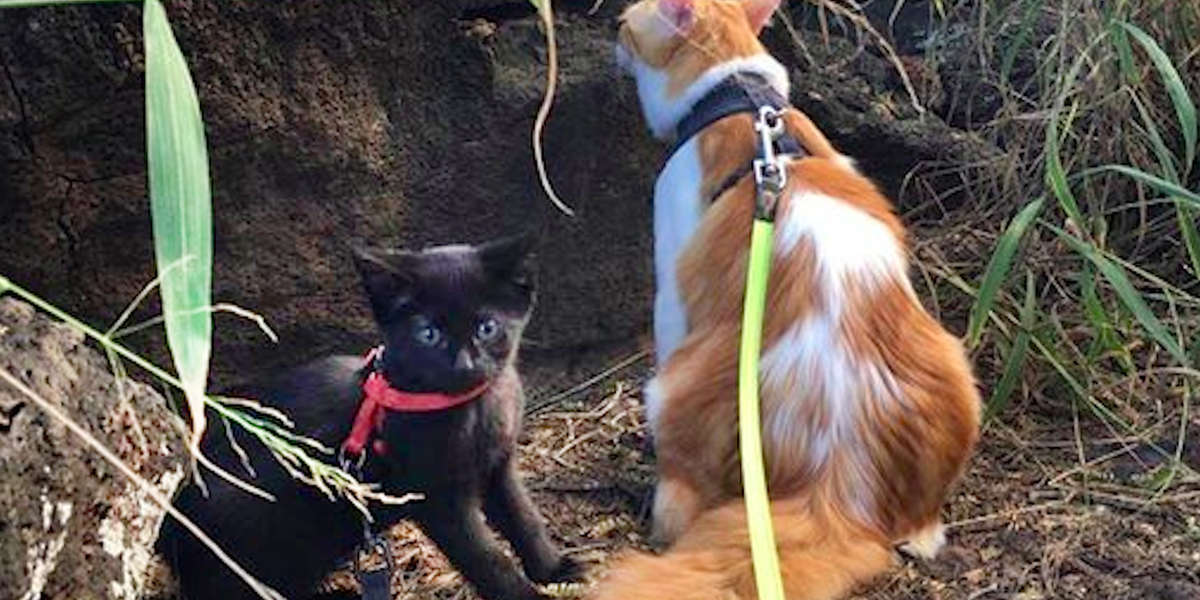 On a rainy night in January, a cat named Atlas was meowing and crying at the door inside his house in Hawaii. The cat’s owner, Sam Christie, figured that a stray animal was around — this is what Atlas did whenever he sensed another cat.

“It was super rainy and the roads were flooding a little bit,” Christie told The Dodo. “I thought I heard a kitten meowing outside, so I put on some shoes and got a flashlight, and I crossed the street and started looking.”

It turns out, Atlas had been right. In a field of thick, tall grass, Christie found a tiny, sopping wet kitten, who was only about 7 weeks old. 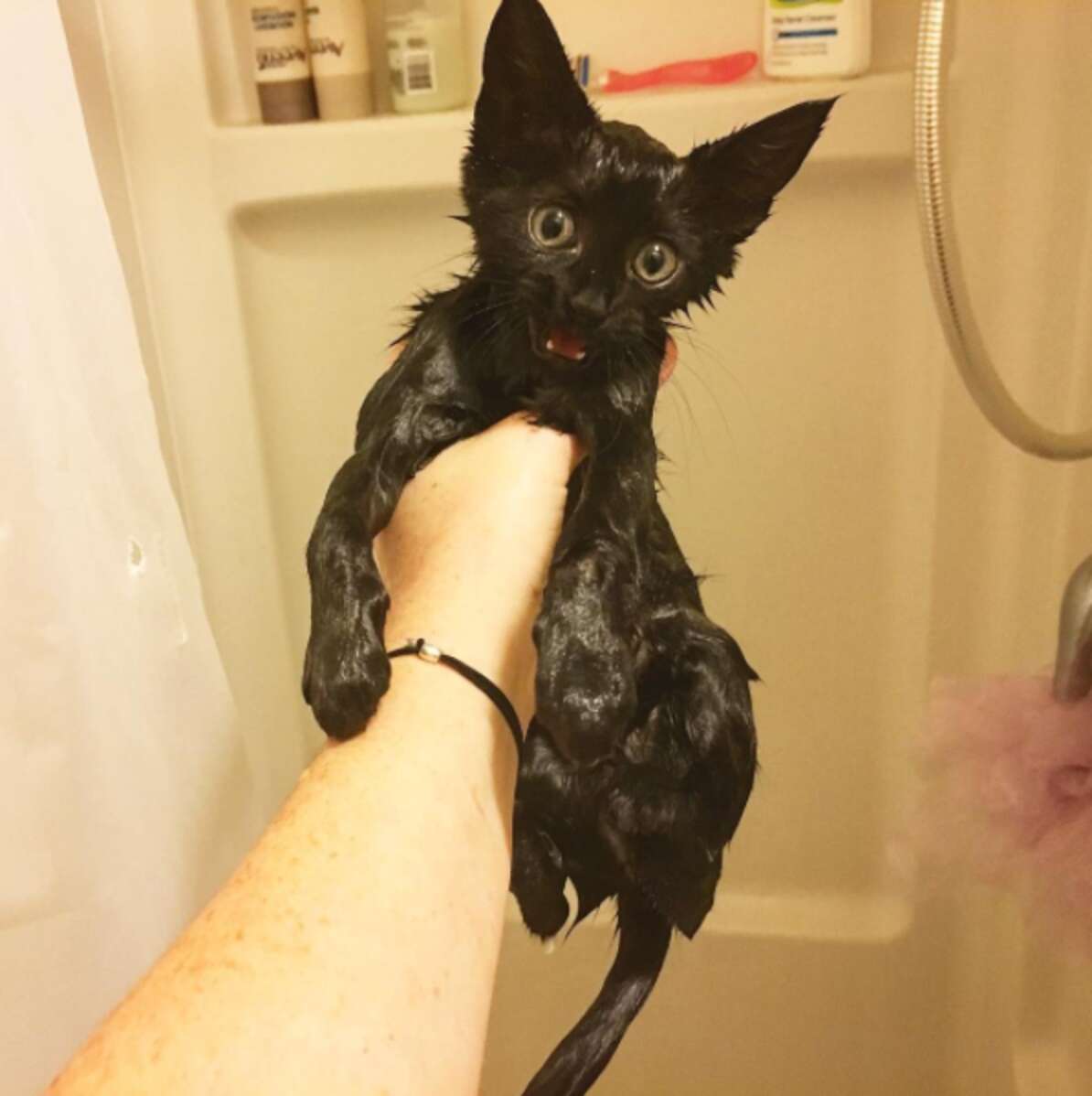 “I reached for her, and she just let me pick her right up, and she never hissed or anything,” Christie said. “She seemed really happy to be with another somebody. So I just brought her back to my house across the street and started getting her cleaned up.”

Though Atlas alerted Christie about the kitten, the cat initially wasn’t too sure about having a kitten around. 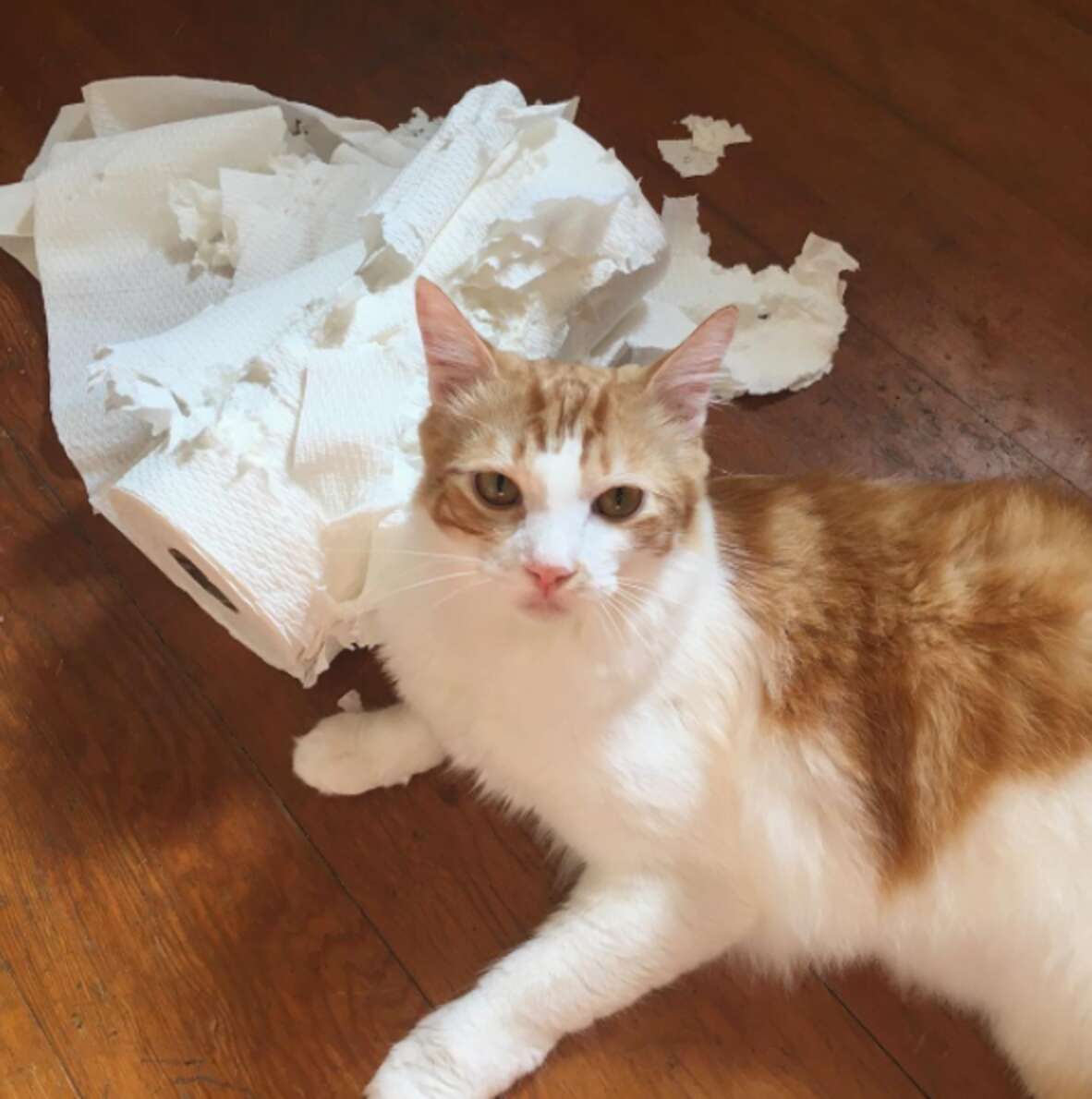 “I just brought her into the house and held her up to Atlas, and he was just like, ‘What the hell is that?’” Christie said.

But it didn’t take long for Atlas to relax around the kitten, named Nell, and adopt her as his own. 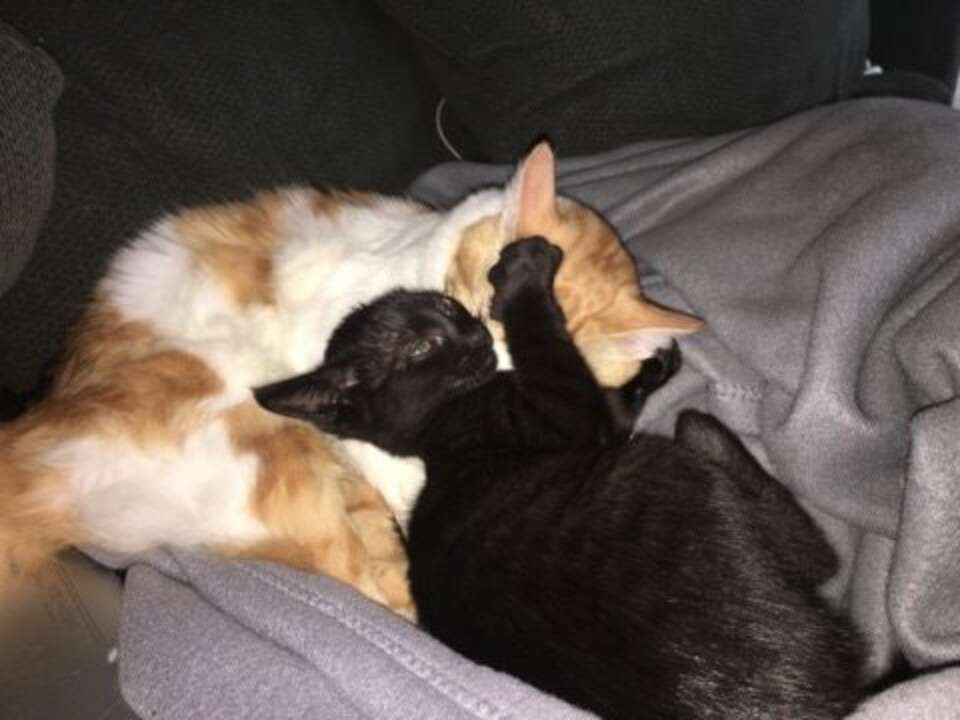 Perhaps Atlas related to Nell’s situation — after all, Atlas had been homeless once himself. His former owner had surrendered Atlas, along with Atlas’s sister and mom, to the Hawaii Island Humane Society when Atlas was only 3 weeks old, according to Christie. 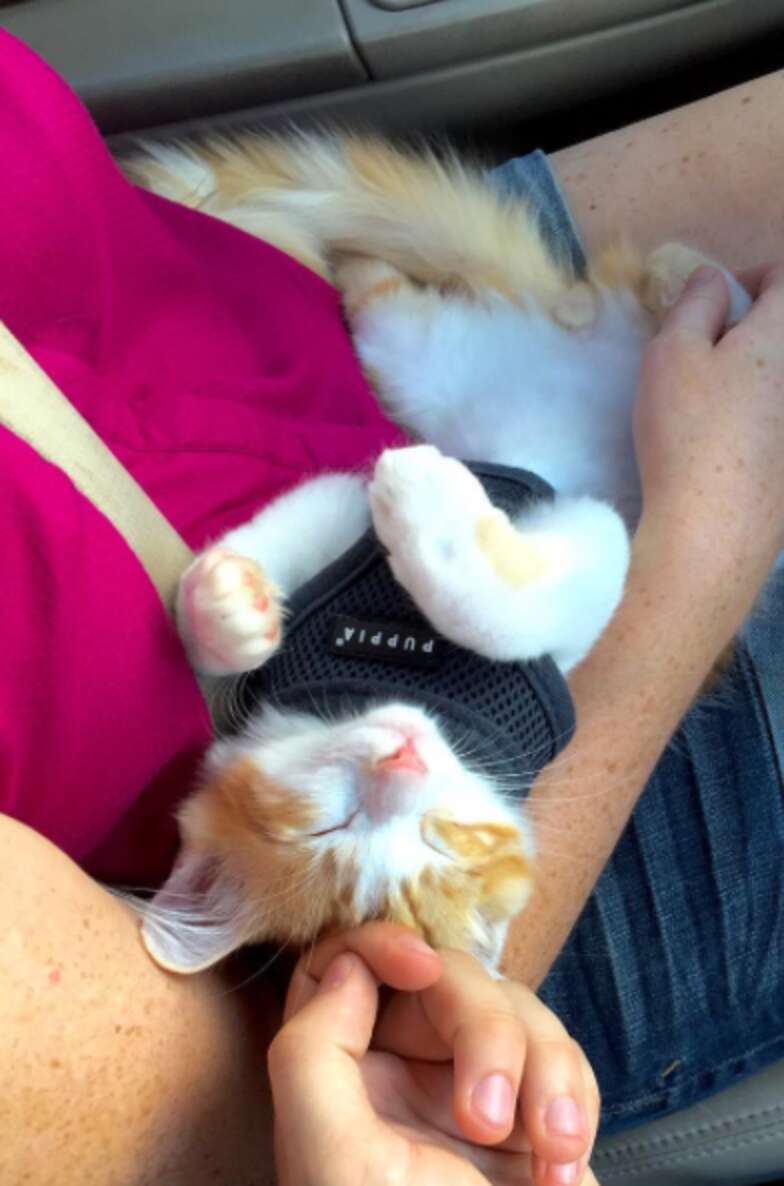 Christie, who works as a manager at the Hawaii Wildlife Center, went to the shelter looking for a specific kind of cat — one she could put a harness on and take on adventures. And Atlas seemed to fit the part.

“I wanted to have an adventure cat who could go out safely on a leash and enjoy the outdoors with me, but also not be contributing to the big issue of free roaming cats killing billions of wildlife each year,” Christie said. “I picked [Atlas] because of his brave and outgoing personality.”

And Christie was spot-on with her assessment of Atlas — he took to the harness and leash immediately, and loved exploring the outside world.

“He was a natural … and thrilled to see the outdoors,” Christie said. “When he’s wearing the harness, he gets all pumped up and he wants to go. It’s a very positive thing for him.” 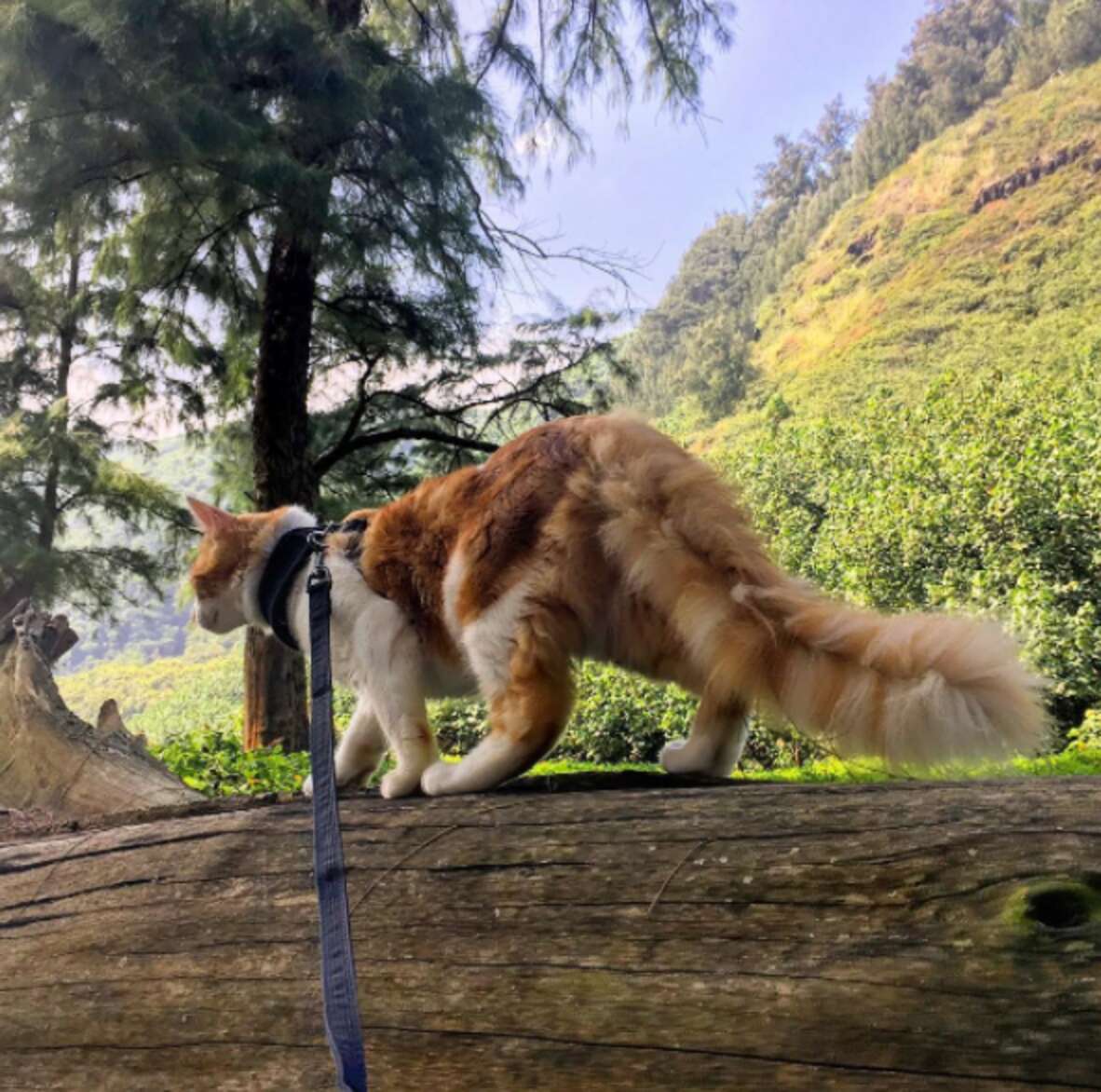 “On his leash adventures he gets to safely experience the beauty of Hawaii and the outdoors,” Christie added. “He gets to walk the beach and climb trees.” 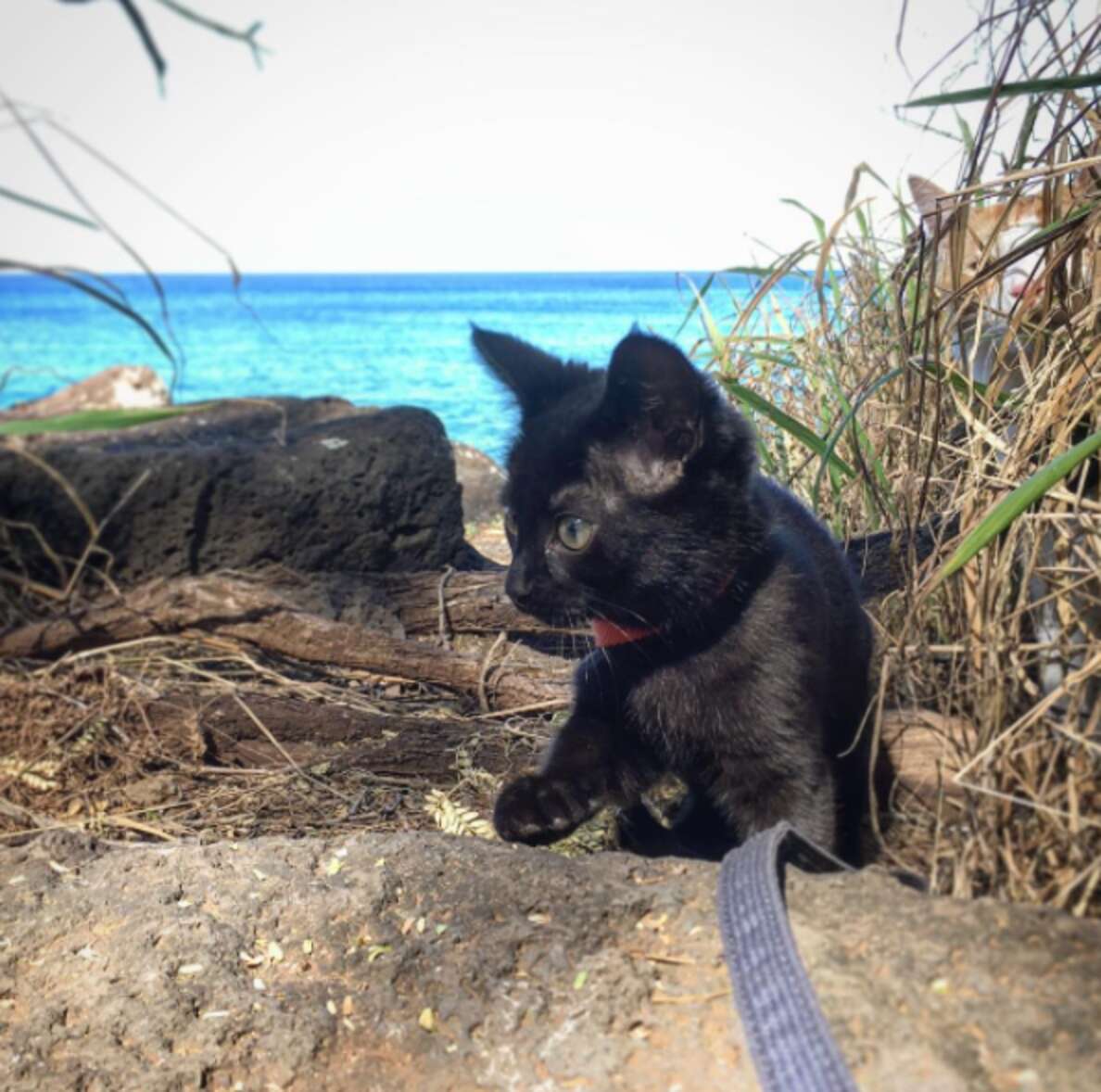 At least two or three times each and every week, Christie takes Atlas for outside adventures at local parks. Christie didn’t initially plan on taking Nell with them. Nell, however, had other ideas.

“The kitten was just really excited, and wouldn’t stop meowing, so she really seemed like she wanted to come with us,” Christie said. “I found a harness that was small enough to try it with her, and I brought her with us.”

Christie initially kept Nell in a special backpack, thinking she’d feel more comfortable and secure in there. But Nell was having none of that. 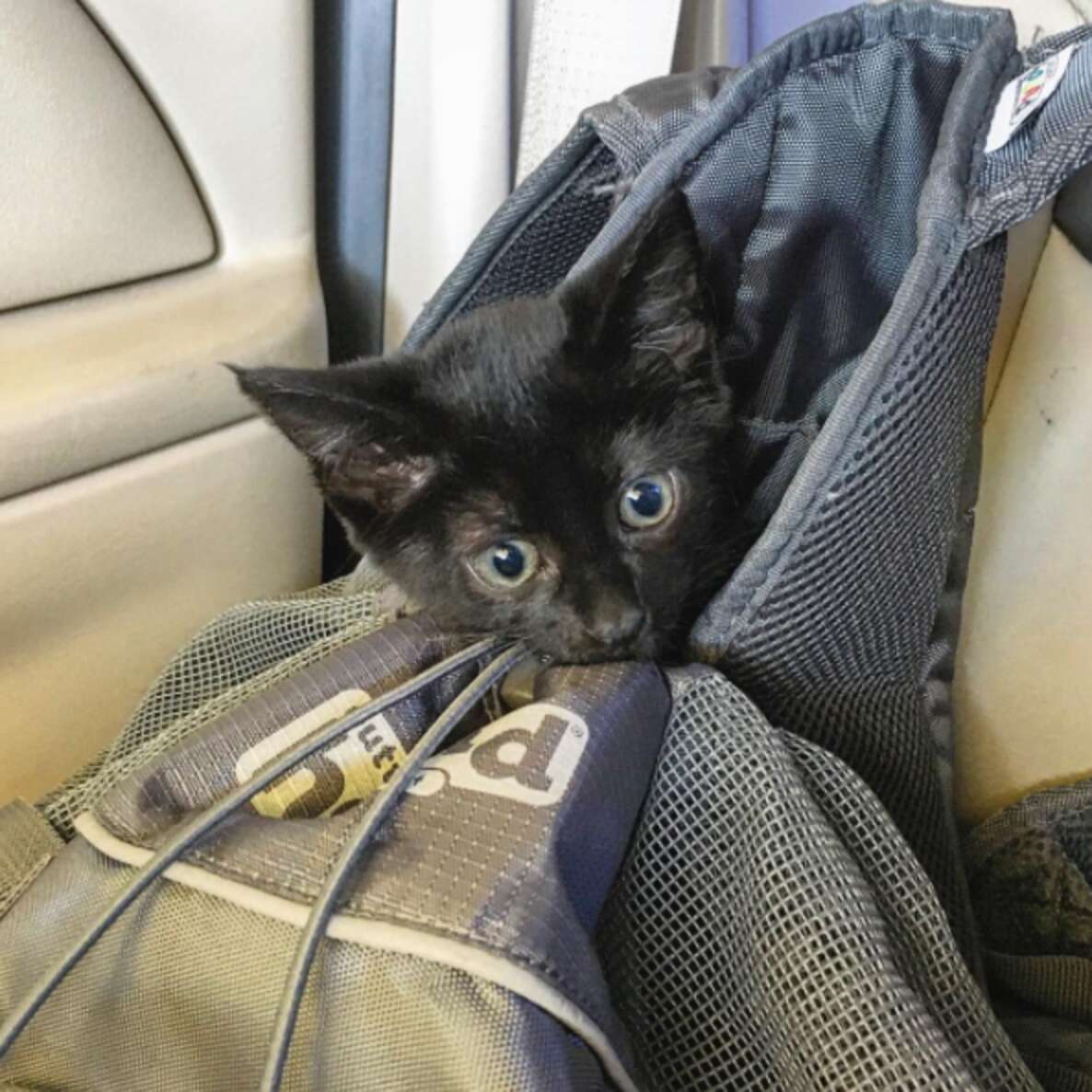 “She would only stay in [the pack] for about a minute, and then she’d want to be on the ground walking behind Atlas, so I figured I’d give her a try,” Christie said. “We were in a nice, quiet park without a lot of people around, so he just charged ahead and walked down the trail and she just started following him.” 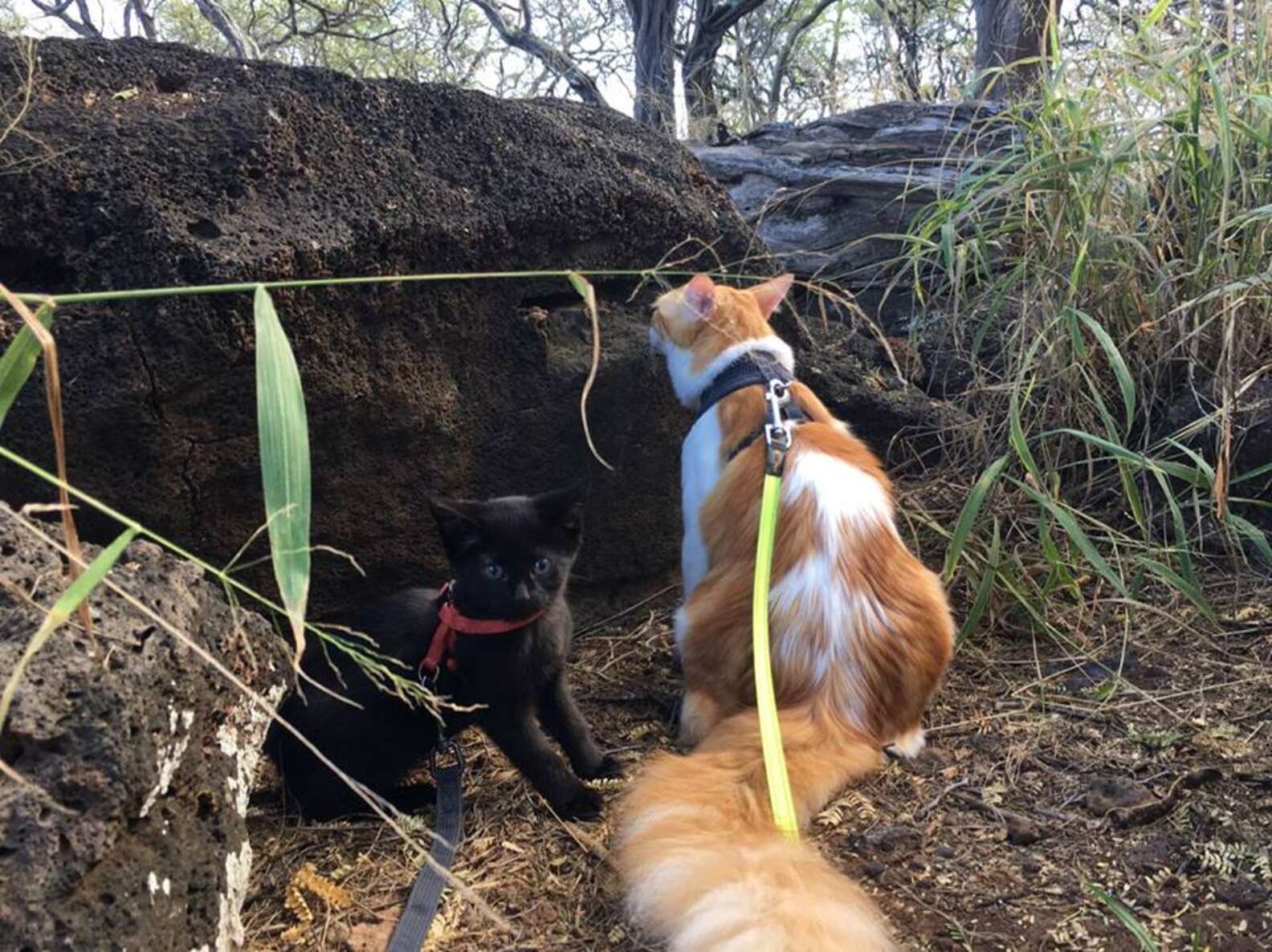 Atlas might have been taking the lead, but he frequently checked up on Nell.

“He would turn around and make sure she was OK … and come back and check on her,” Christie said. “She would just follow him to the ends of the earth, and she just seemed super confident as long as he was there. If she couldn’t see him, she got nervous.” 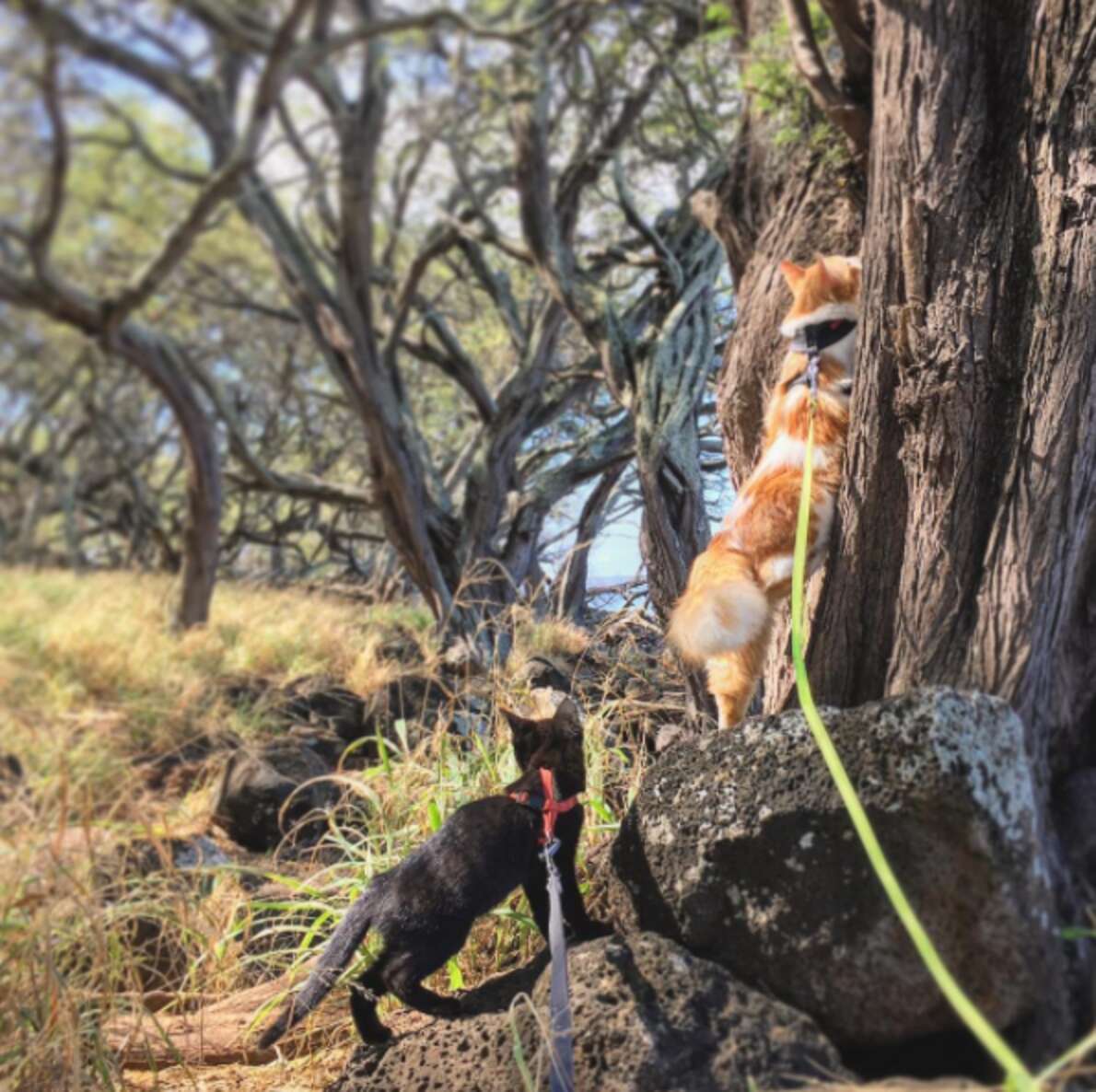 Whenever Christie tried to pick Nell up, Nell would wriggle out of her arms.

“She didn’t want to be with me — she wanted to be with him,” Christie said. “And then she was really confident, and she really enjoyed going out too.” 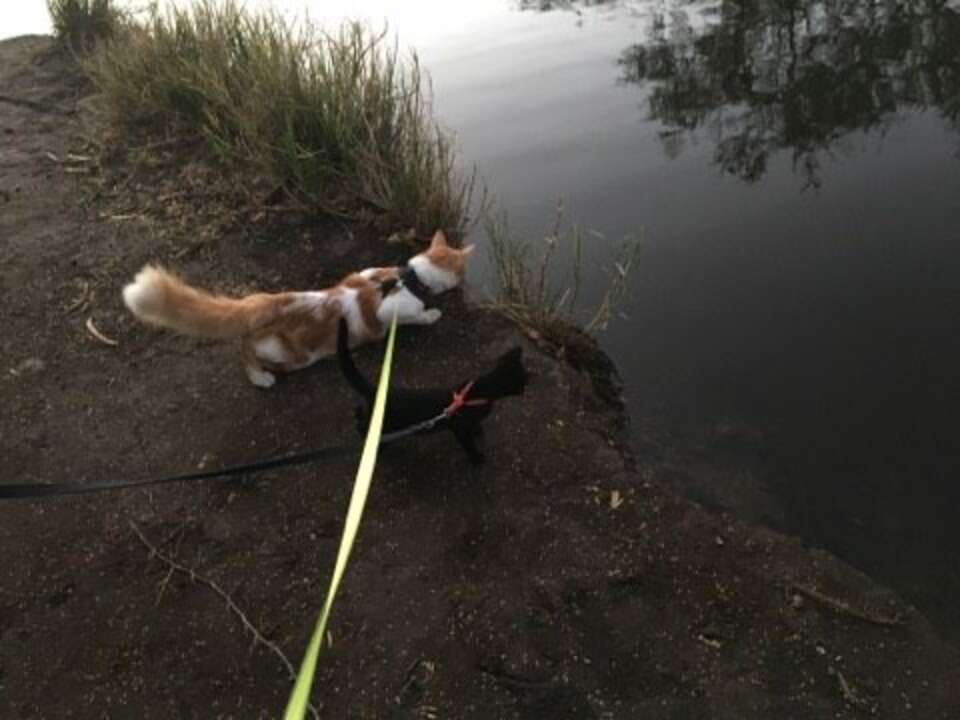 Besides going on adventures together, Atlas and Nell love to wrestle with each other, and snuggle up and snooze.

Atlas is also responsible for teaching Nell some interesting habits, according to Christie. 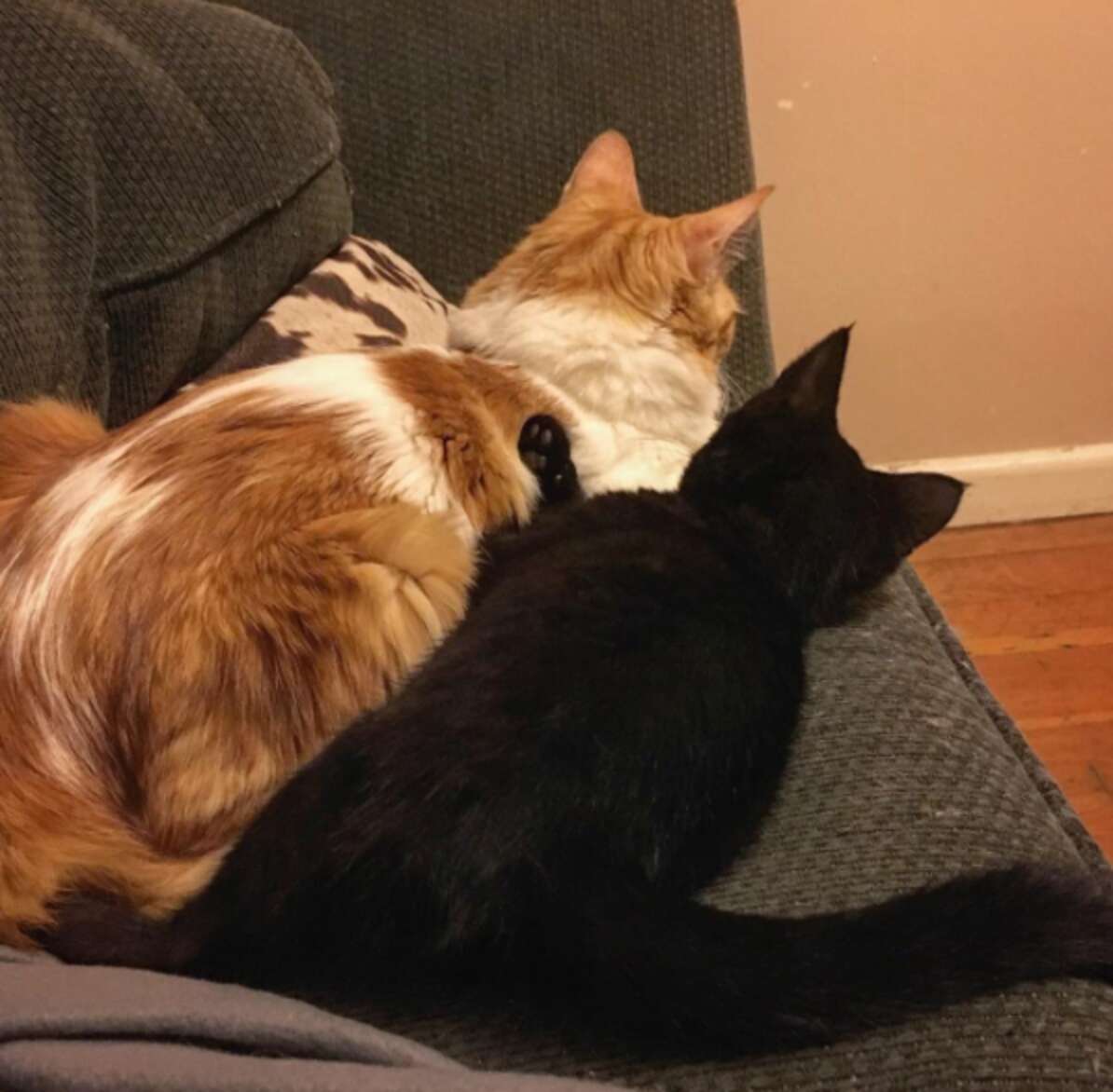 “Nell will carry around socks in her mouth, and treat them like they are a prey item that she’s killed, or she’ll steal food off the counter, and those are totally things she learned from Atlas,” Christie said.

When Christie’s friend Rachel Sprague adopted Nell in February, Atlas was a little down. 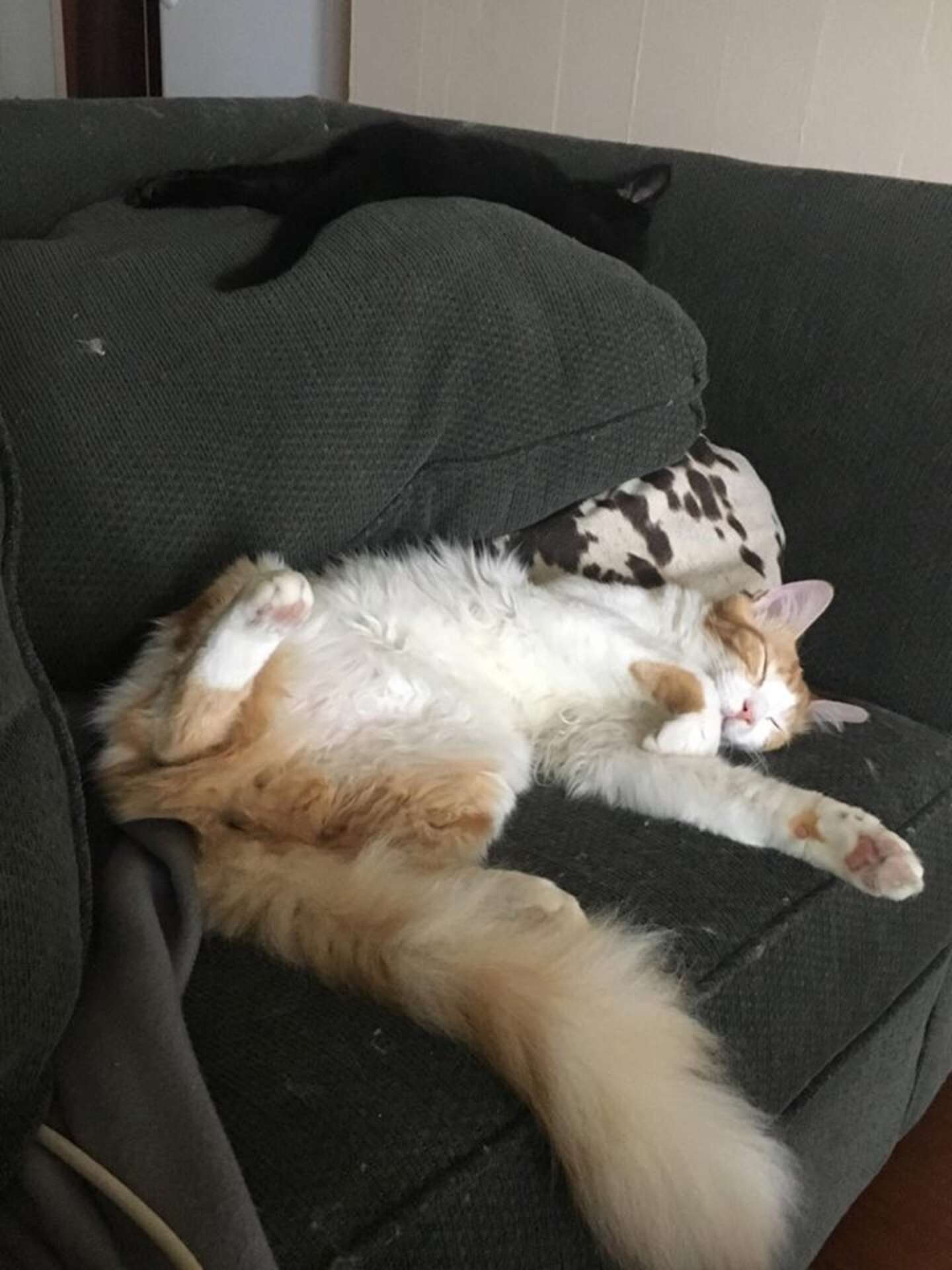 “He kind of just slept a lot for the first couple of days after she left, and he paid a lot more attention to the other two cats I had, and he wanted to snuggle up with them,” Christie said. “I just tried to keep him busy by taking him to the park a bunch.”

Nell now lives on the Hawaiian island of Lanai with Sprague’s other cat, Kona, whom she got at the Lanai Cat Sanctuary, a refuge for over 500 cats in Hawaii. 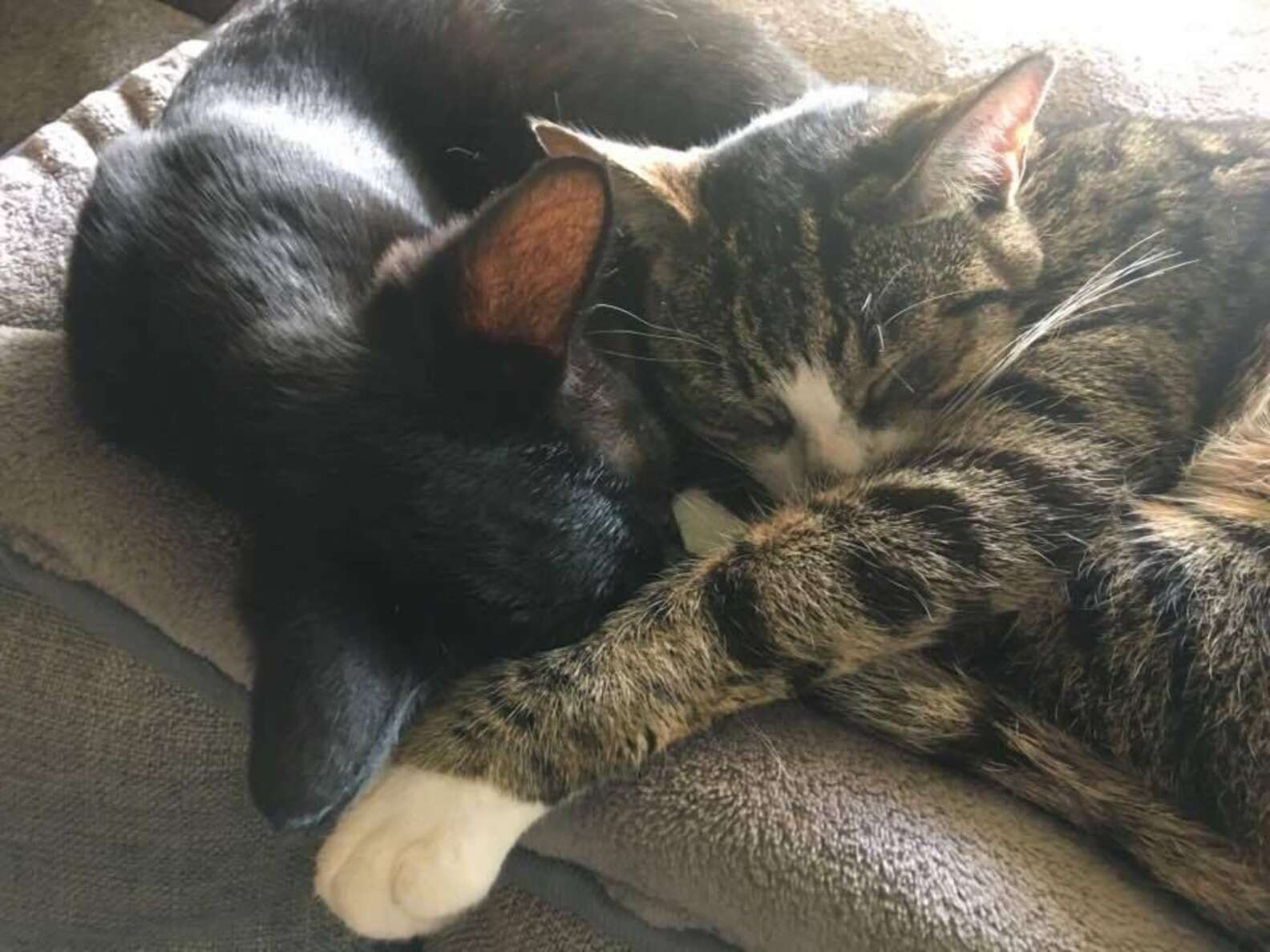 Atlas might not have Nell in his life anymore, but according to Christie, he may have found his next friend. 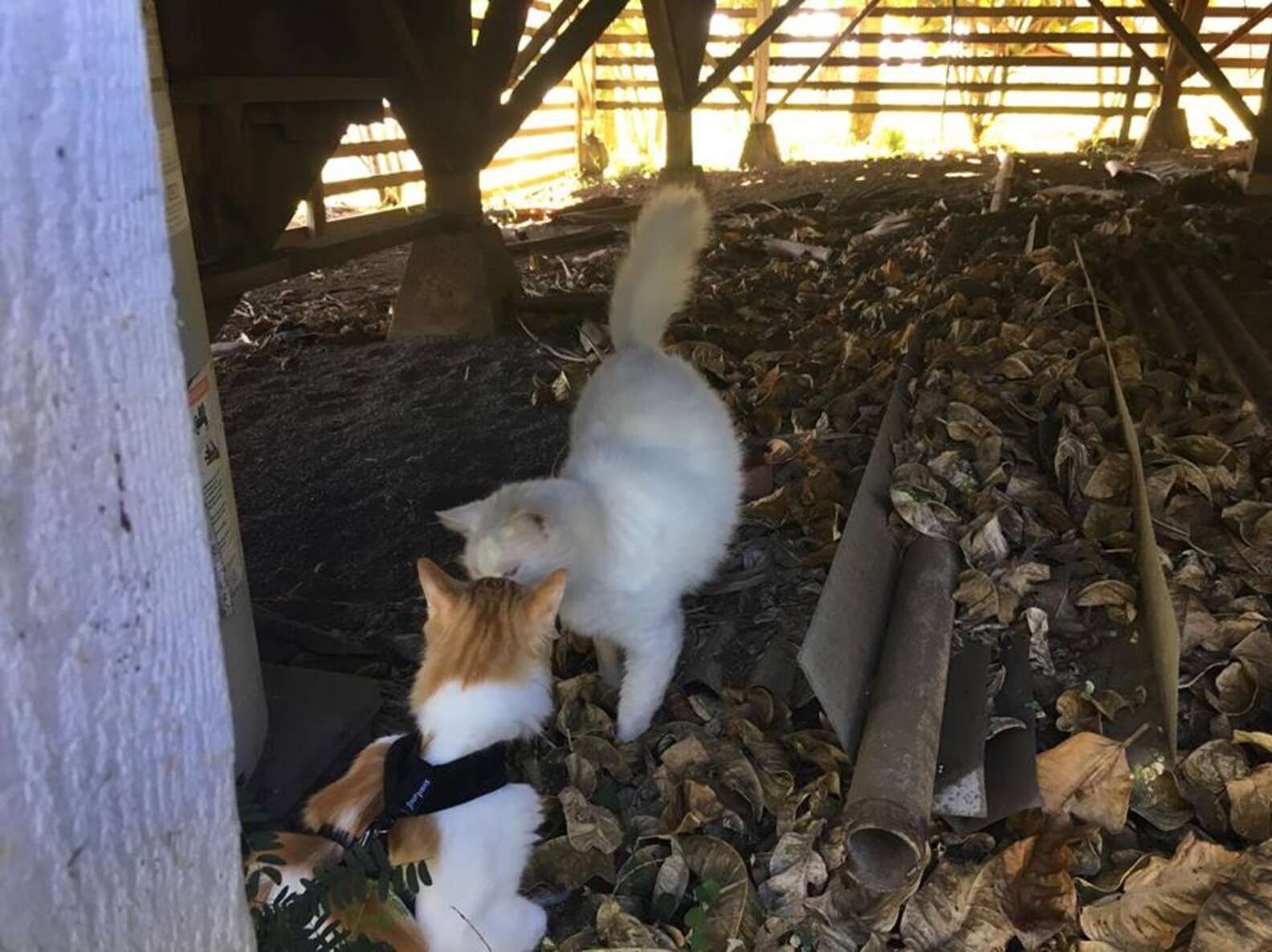 “He’s working on bringing another stray into the house, so he’s got a new project,” Christie said. And who knows? Maybe this new cat will want to go on adventures with Atlas, too. 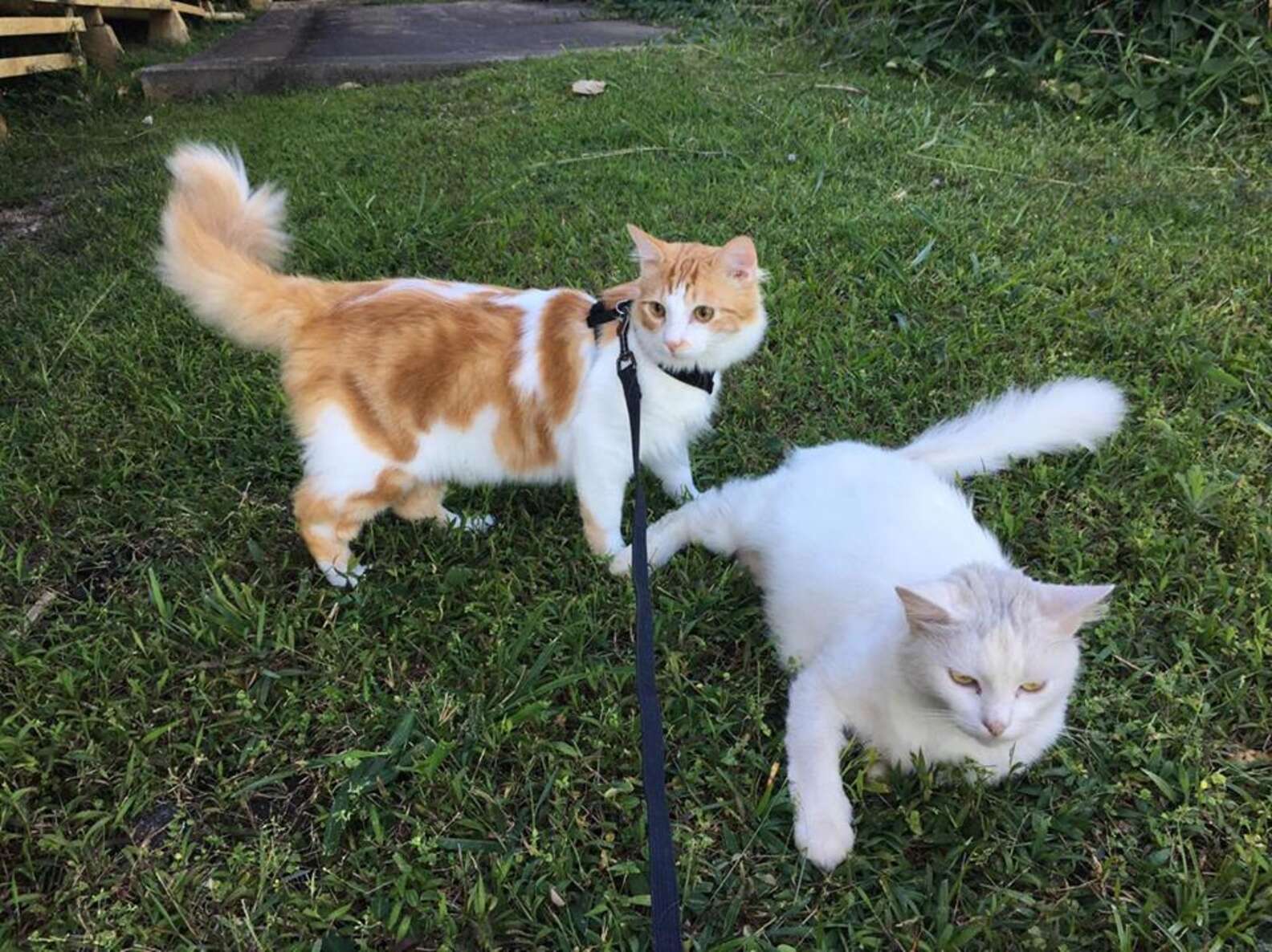