David had no idea when he first brought Scrappy home in 1997 that his cat would undergo a transformation that would, in his words, make him look like a “Nordic god.” He was just a cute, feisty black cat with a lot of personality back then.

“Scrappy was sitting on his own,” David recalls, “and while he was cute, we didn’t think other people would think he was as cute as his siblings.”

And, strange as it may sound, black cats are adopted at a lower rate than other cats due to old superstitions. “I chose Scrappy because I knew he’d be the last one taken, if at all,” David explains.

Scrappy settled into his new London home and immediately began living up to his name, bouncing around and clawing up David’s legs, but David was fine with it and fell head over heels in love with his new kitty. Scrappy enjoyed being outside, playing with his toys, and watching the world go by through the window.

But when Scrappy turned 7, David noticed that his all-black coat was changing and that white patches, like frost on a morning lawn, were appearing.

Scrappy has vitiligo, a skin condition characterized by the loss of pigment in patches, resulting in white or colorless skin and hair. It can affect both humans and animals.

Scrappy evolved from a coal-black kitty to one that appears to be caked in ice, giving him the appearance of a mythical creature from the grim and frostbitten North. His outlandish appearance drew him some admirers as well. 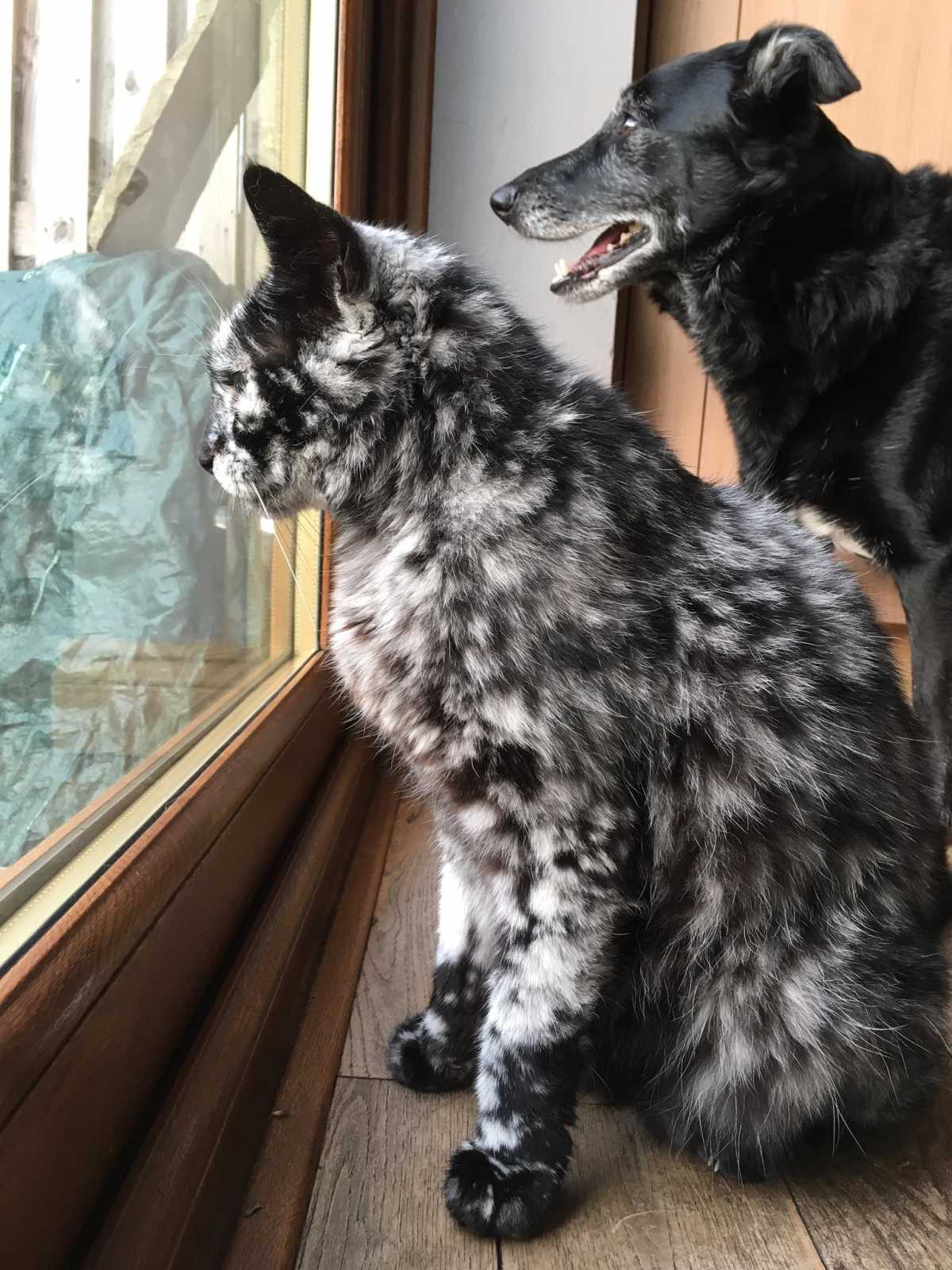 He’s gained quite the following online thanks to his unusually patterned coat, which makes it look like he’s covered in snow and ice, and gives him the appearance, says his human David, of a “Nordic god.” 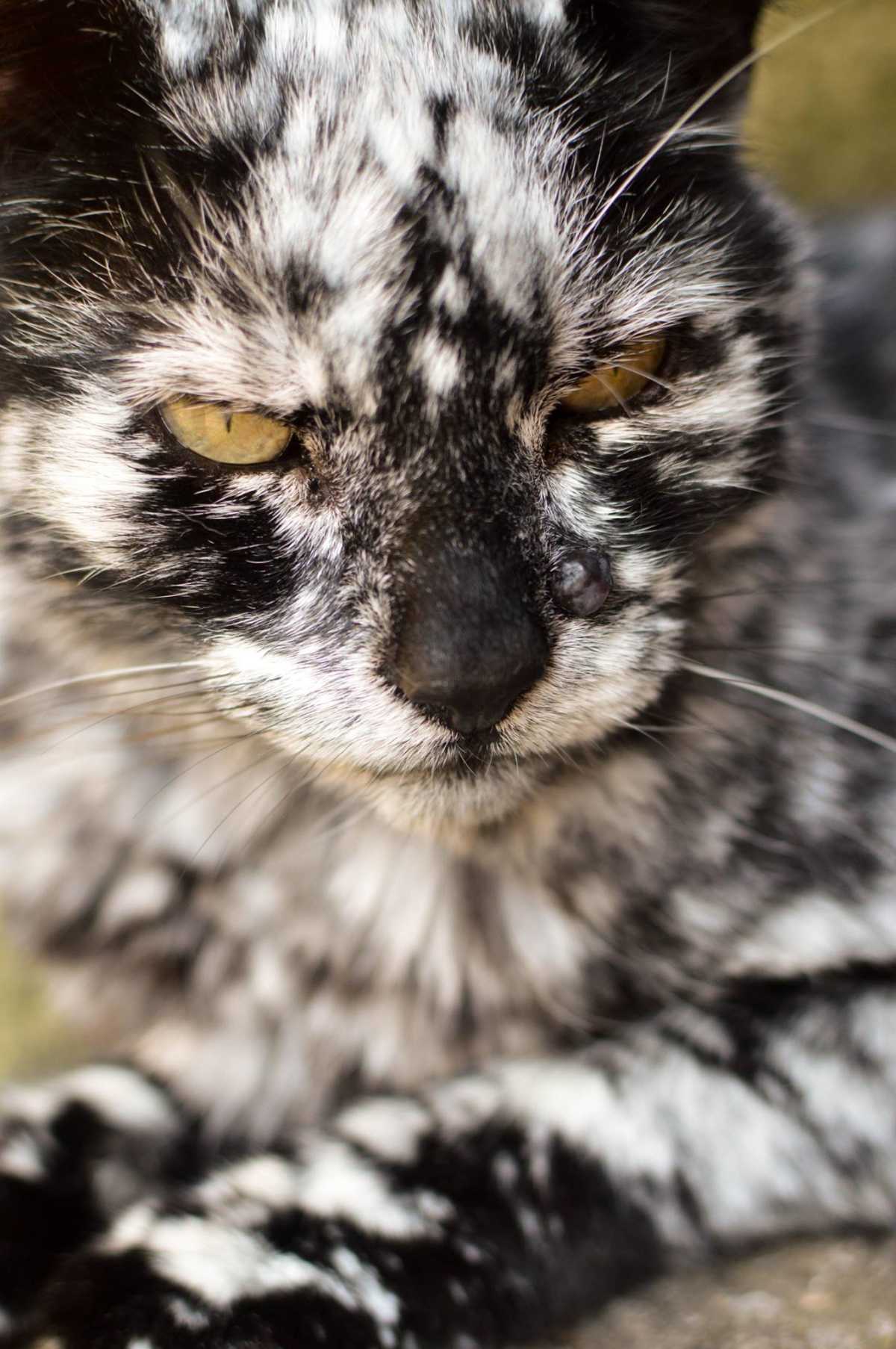 Scrappy’s eye-catching black-and-white pattern is caused by vitiligo, which first appeared when the cat was 7 years old.

The white patches spread over time, giving him the appearance of being covered in frost — and becoming more intense. 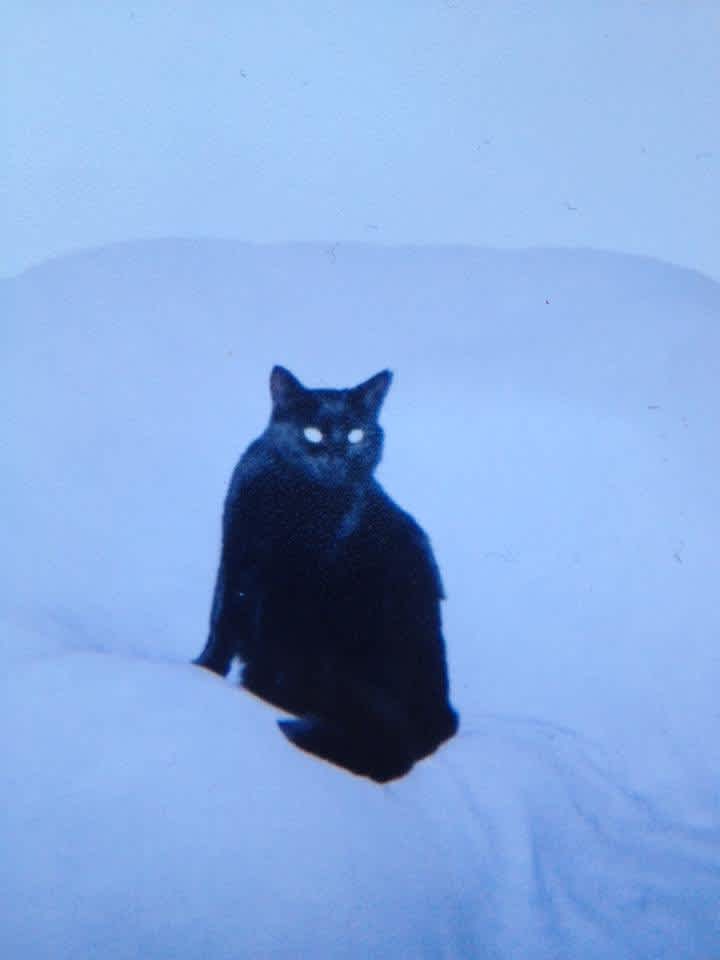 Here’s how Scrappy looked at age 5, two years before the vitiligo began to manifest. At this point, he was just a black cat, and David adopted him out of fear that no one else would.

As silly as it sounds, black cats are less likely to be adopted thanks to the old superstition about black cats being “bad luck.” Of course, that’s nonsense, and luckily for Scrappy, he found a great forever home. 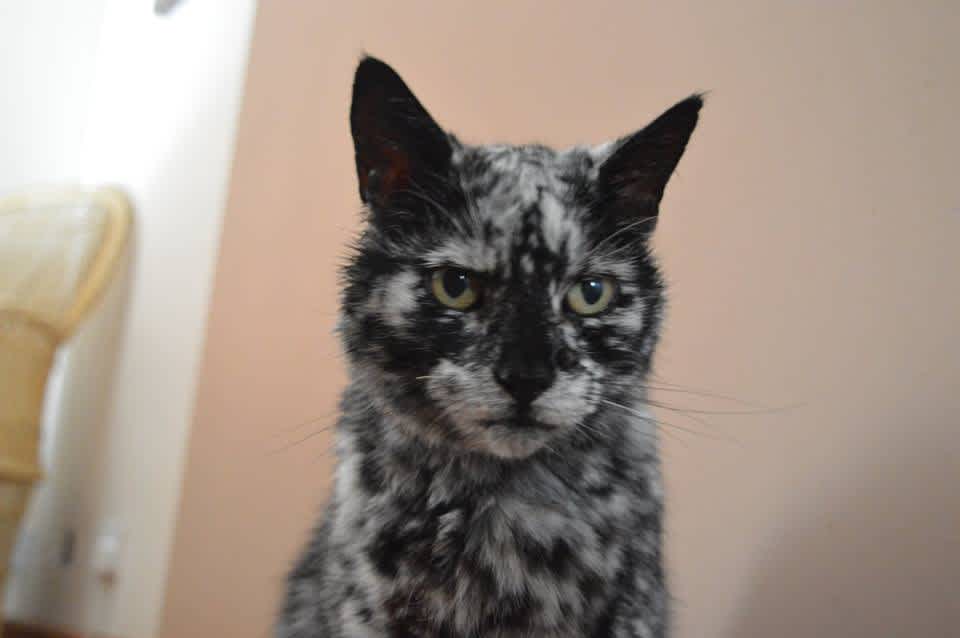 His advanced age isn’t slowing him down any longer. He still wants to be the tough guy in town, and his new look only adds to that image.

“I guess you could say he rules the street and all the other cats stay away,” David says. “We named him Scrappy because he fights with other cats for scraps.” 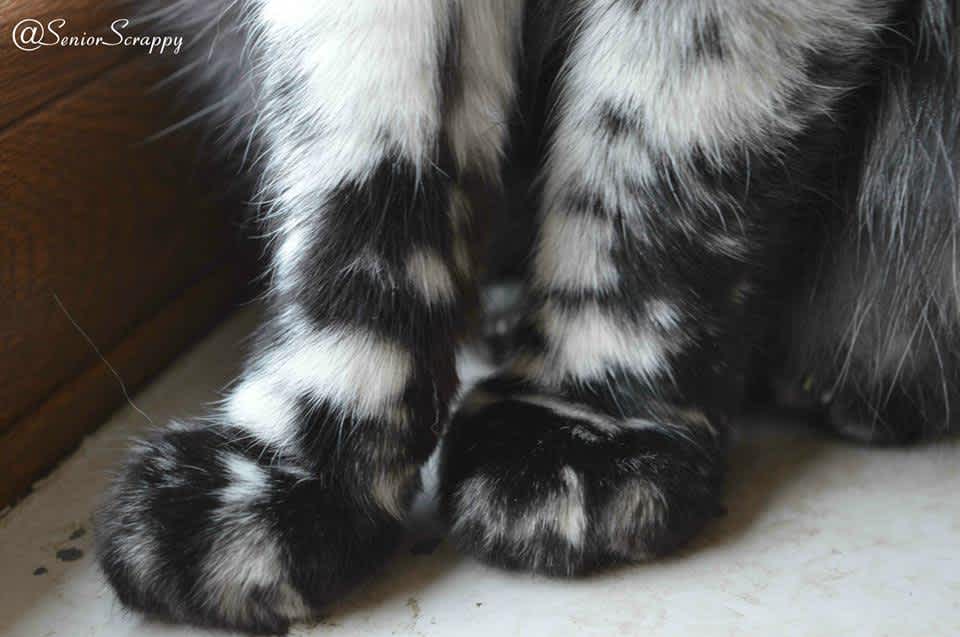 Despite his tough exterior and appearance as a son of northern darkness, David claims Scrappy is nothing but loving and affectionate toward him. He can be grumpy at times, but David chalks it up to his age.

Scrappy had to adjust to some new kittens as well. “At first, he was very hissy with the new kittens that came into his home,” David says, “but he has improved a lot over a month.” 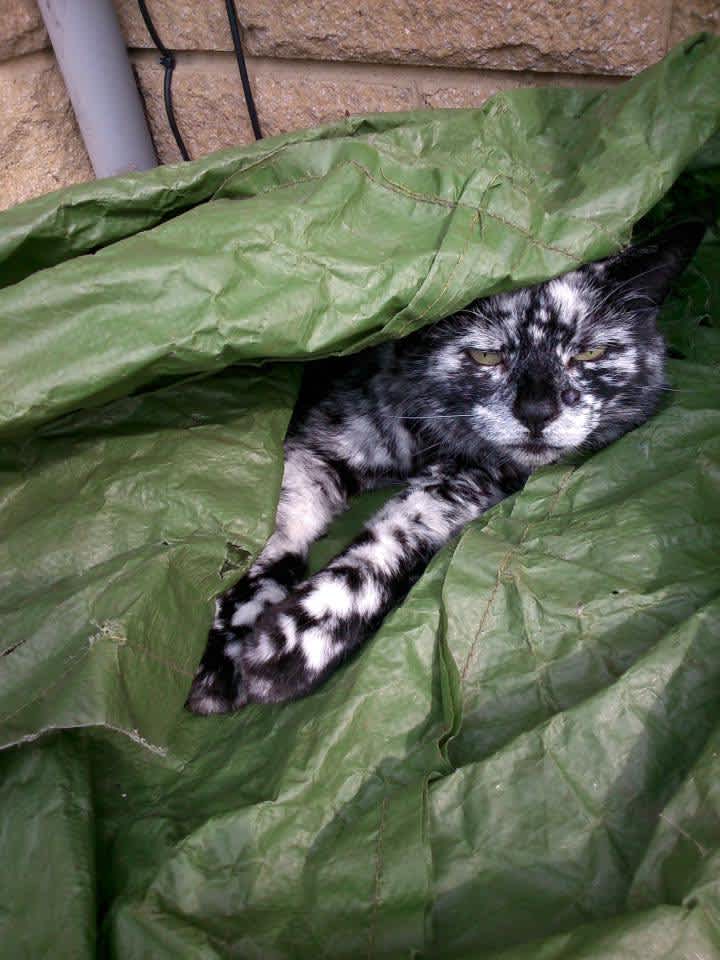 “He used to hiss and swat at them to get them to move out of his way, but now he barely does anything, even sharing his food and space with the kittens.”

He also enjoys spending time outside, soaking up the rays. While he may appear wintry, he enjoys soaking up some rays!

“With Scrappy technically being a black cat, I can vouch that black cats are fun, beautiful, wise-looking, energetic, affectionate, and loving, mysterious yet charming, and are definitely good-luck charms, like Scrappy is for me,” David says. 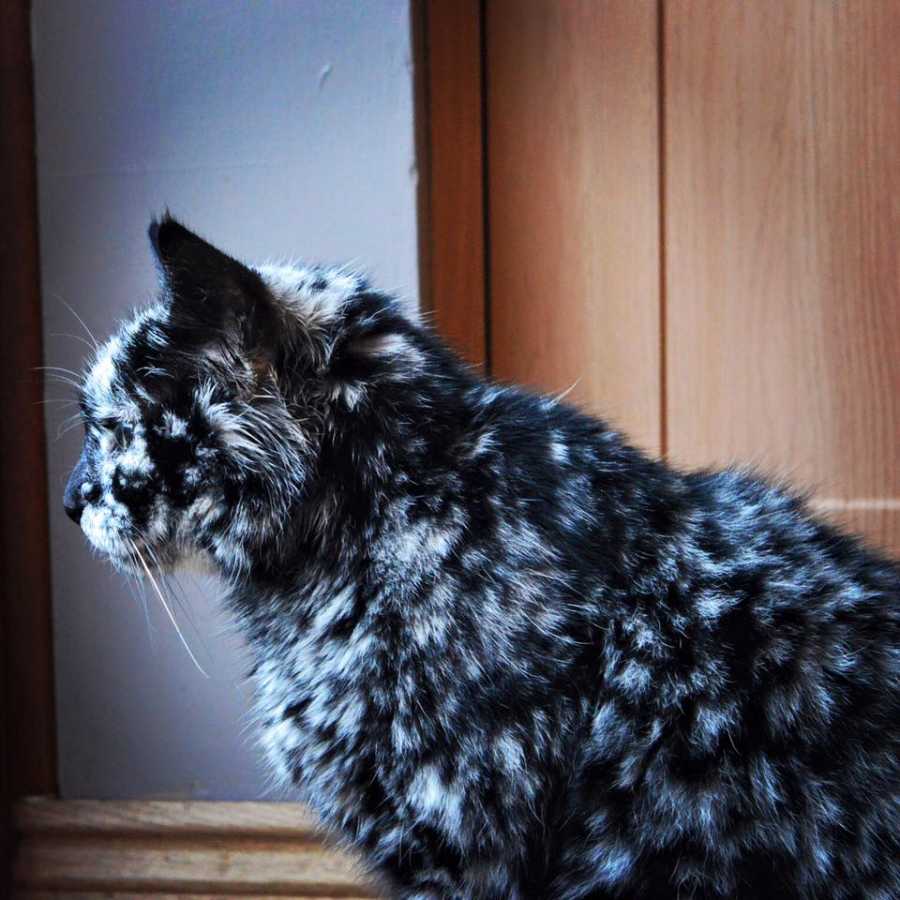