This adorable bright yellow creature that got rescued in West Bengal, India is making headlines. Apparently, it is an albino Indian flapshell turtle, but people on the internet think it looks more like a slice of cheese.

The unusual turtle was stumbled upon by a farmer while he was working in his fields in the village of Sujanpur, in Odisha’s Balasore district. The farmer decided to bring the turtle home before handing it over to forest officials, who then contacted conservation experts. Talking to CNN, Siddhartha Pati, executive director at the Association for Biodiversity Conservation, said that it was the first time he had ever seen this kind of turtle. The now-viral pictures of a bright yellow turtle were shared on Twitter on October 27. Naturally, people were more than surprised by its looks and started comparing it to cheese. But in fact, it’s an extremely rare albino flapshell turtle, which has been spotted in the wild only once before. This type of turtle can also be found in other South Asian countries like Pakistan, Sri Lanka, Nepal, Bangladesh, and Myanmar.

Siddhartha Pati, executive director at the Association for Biodiversity Conservation explained to the media that the vibrant yellow color of the creature is due to albinism. “It is a congenital disorder and it is characterized by complete or partial absence of tyrosine pigment,” he told CNN. It is a pigment that can be found in most reptiles. “Also, sometimes a mutation takes place in the gene sequence or there is a deficiency of tyrosine,” he continued. The experts believe that the discovered turtle is an adult, somewhere between one and a half and two years old. “This is the first time in Odisha and second time in India that an albino turtle has been found,” Siddhartha Pati told the media.

“One such aberration was recorded by locals in Sindh a few years back,” tweeted Susanta Nanda, who works at the Indian Forest Service, upon sharing a video and a picture of the rare turtle. “Mark the pink eyes, one indicative feature of albinism,” he added. 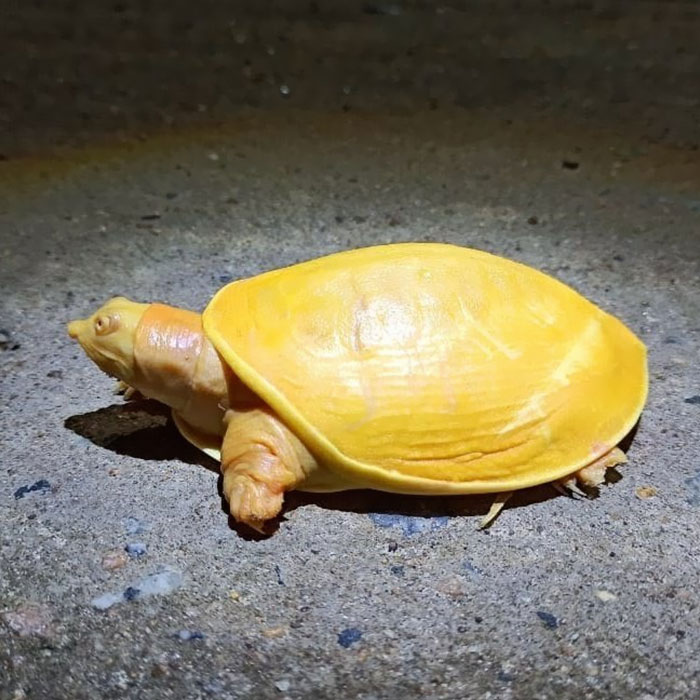