When Hurricane Florence engulfed North Carolina with floodwaters, Mike Stura jumped into his truck and drove from New Jersey to see if he could rescue some animals.

Stura, founder of Skylands Animal Sanctuary and Rescue, didn’t need to look hard. On Sunday, he and his two friends, Todd Friedman and Dave Miller, found three puppies above the floodplains in North Carolina who needed their help. 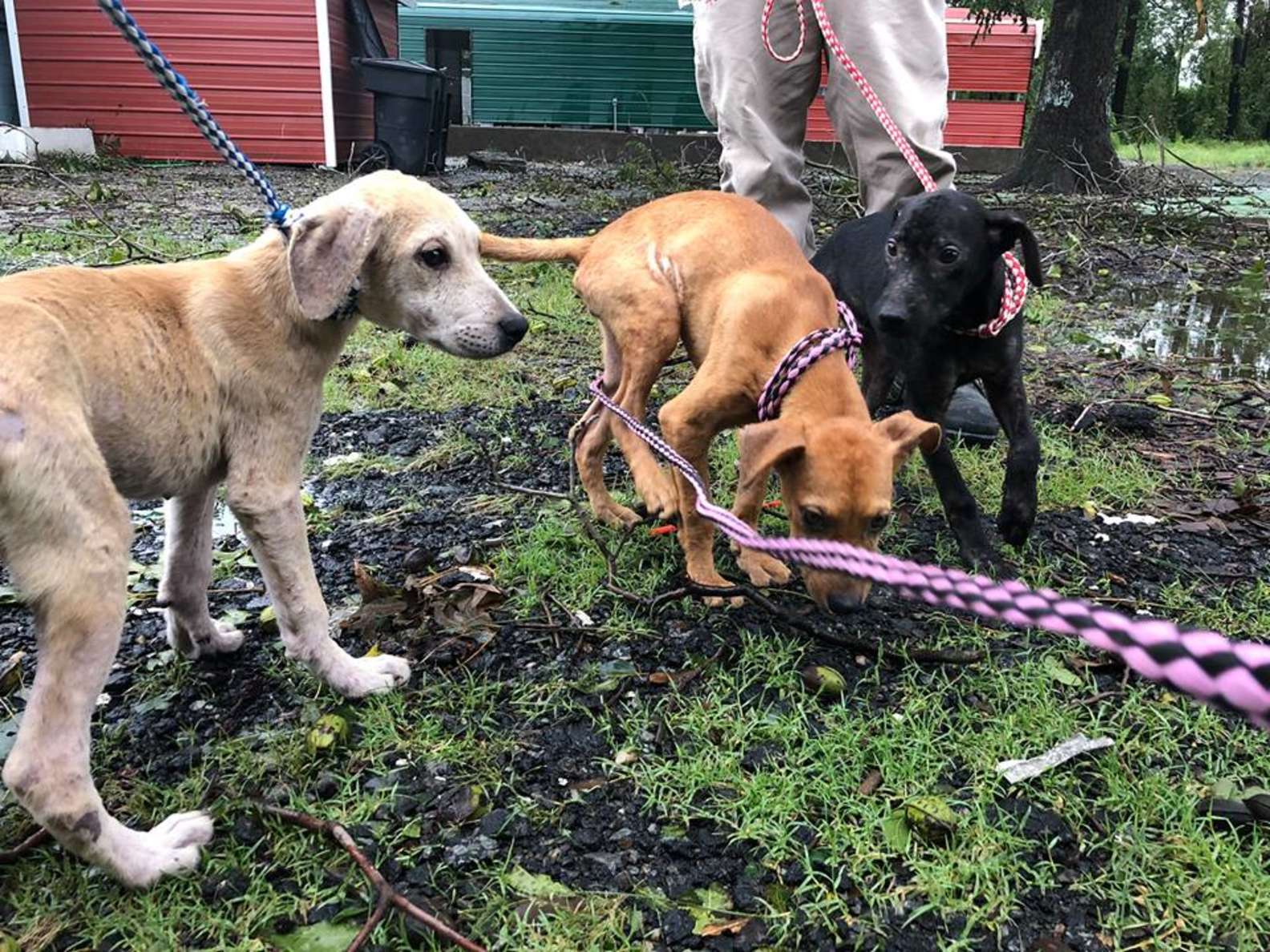 “They were emaciated and abandoned and shivering, and I pulled up by the road with the truck,” Stura told The Dodo. “I just stopped, and they came right up to me.” 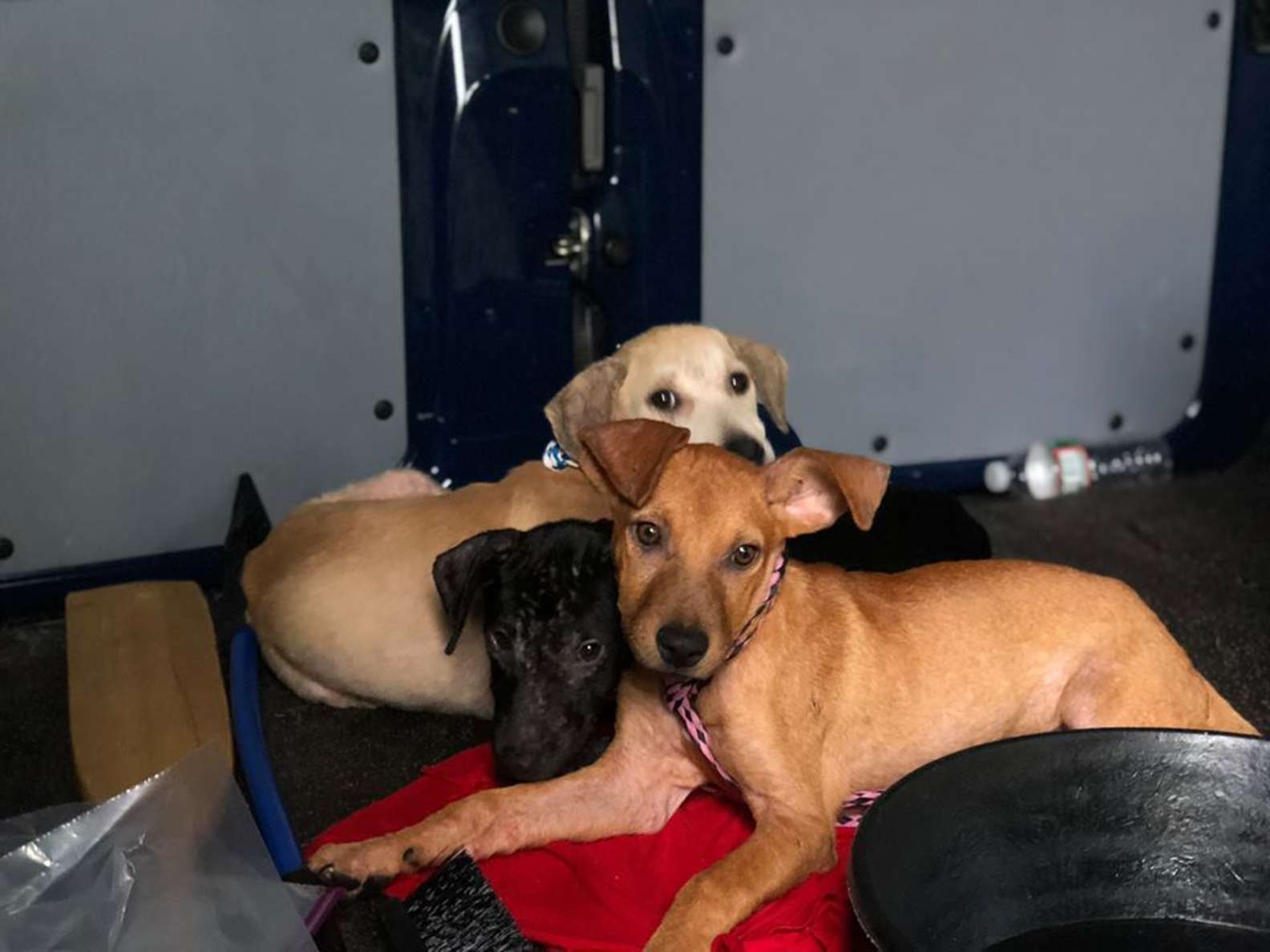 But the puppies turned out not to be his biggest challenge. Someone had shown him a video of cows struggling to swim in surging floodwaters on a nearby property.

“I put the boat in, and a local girl, Caroline Byrd … showed us where to go,” Stura said. “She didn’t live far, and she knew the area where the cows were, so she hopped into the boat with me, and off we went.”

When they arrived at the property, some cows had safely gotten onto the owner’s front porch, which was elevated above the floodwaters. But one cow was swimming in front of the flooded barn — and she was struggling to keep afloat.

“We chased her and got a halter on her,” Stura said. “To keep her head above the water, we latched her to the boat so we could bring her with us.”

But getting the cow to safety wasn’t easy. Stura had parked his truck and trailer a mile away, so they had to drag her quite a far distance with their boat. At one point, their motor failed.

“Luckily, a guy came with a jet ski and gave us a little tow,” Stura said.

But the hardest part was getting the cow out of the water. 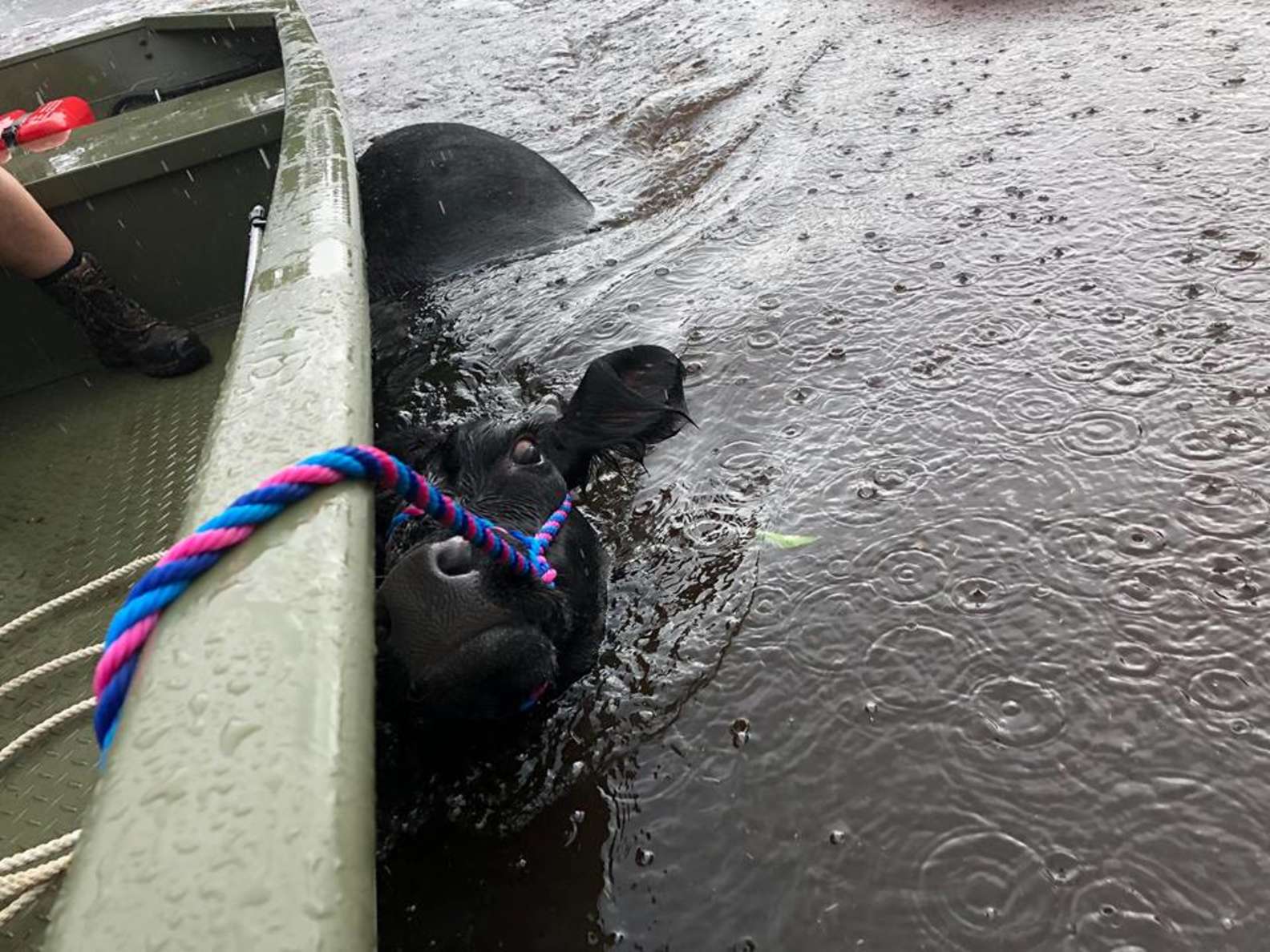 “The girl had lost so much energy from swimming, and she was running on pure adrenaline,” Stura said. “Once we got up close enough to where the water was no longer supporting her body weight, she could no longer get herself up off the ground. So we had to try and lift her … and she’s a good size.”

Stura, Friedman, Miller and the locals worked together to lift the cow out of the water. 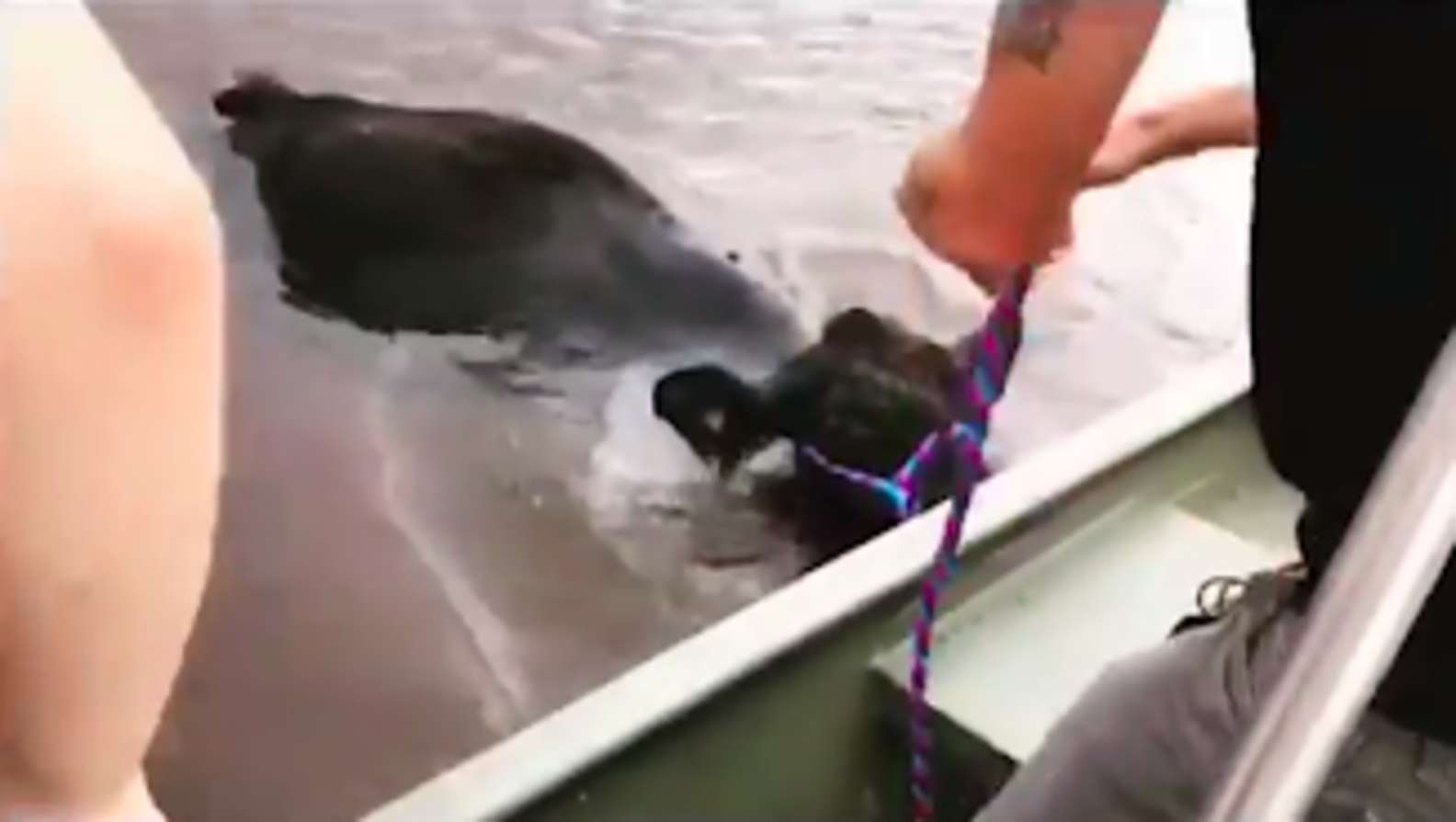 “She would cry and I’d lift her, and she would get her rear end up, but she just couldn’t totally stand,” Stura said. “We got some straps beneath her and some halters on her face … and there was about eight of us, lifting and pulling on her, and we just kind of heaved her up into the trailer.”

The cow finally collapsed in the safe, dry trailer. Stura tried talking to her, telling her that she was going to be OK. 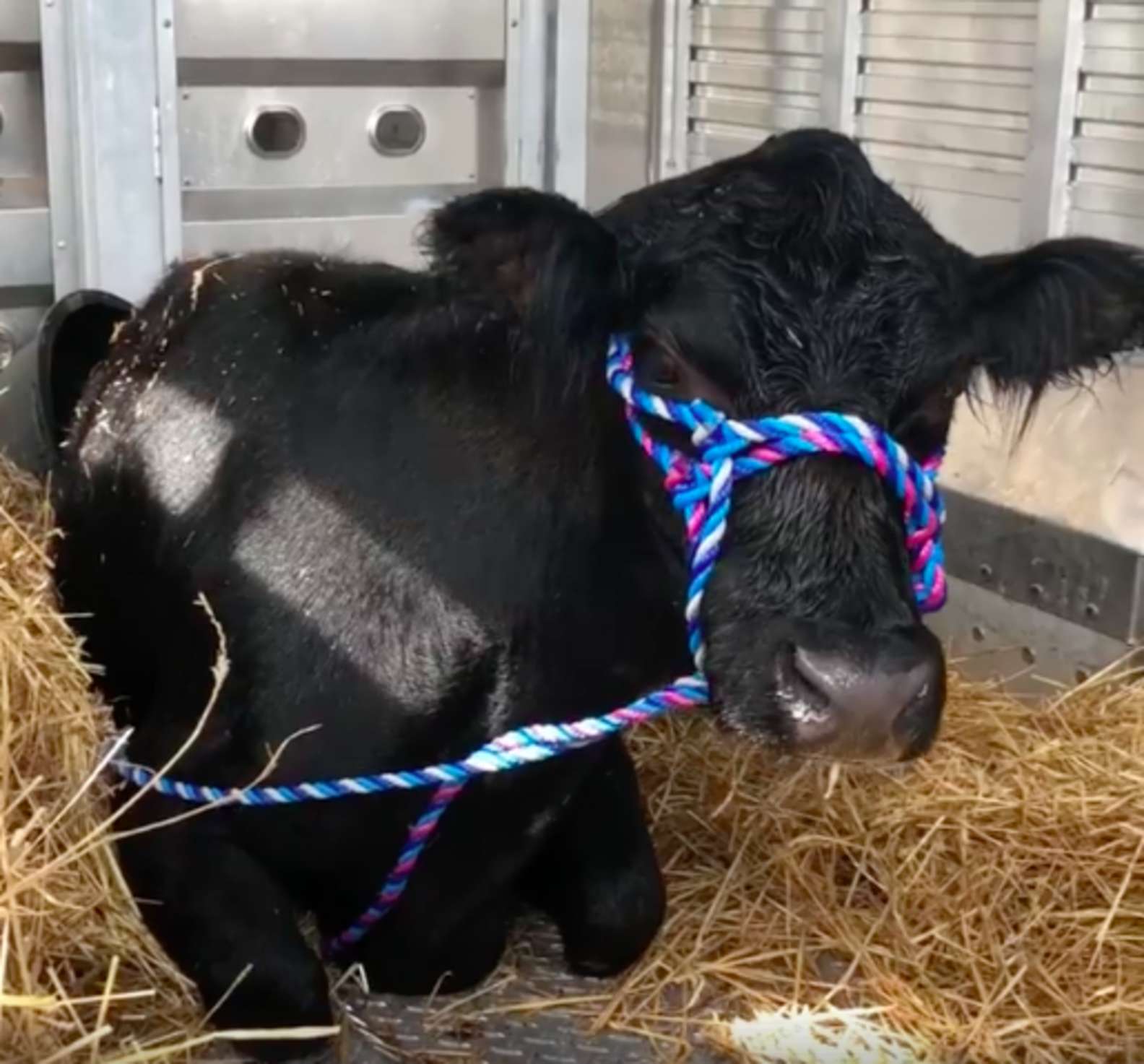 “Even though she’s too tired to get up, she’s feisty,” Stura said. “She’s a beef cattle — they don’t get handled by people, so she probably has had very limited interactions with people, and probably what she did have was not really positive — it was probably people taking her family and friends away, so she was understandably a nervous wreck.”

The farmer who owned the property had told Stura over the phone that if he managed to rescue any cows, he could keep them — so Stura drove the rescued cow home to his sanctuary in New Jersey.

“I pet her on the head and talked to her,” Stura said. “I can already see that her demeanor is starting to change a little bit, but I would say that it’s going to take a little work for her for sure. And that comfort will probably not come from me — it will come from the other animals. They’ll make her feel safe, and eventually, I believe they’ll make her feel that she can trust me because of my interaction with them.”

Stura is hoping that the cow, who has yet to be named, will bond with Babe, whom Stura rescued from Hurricane Harvey last year. 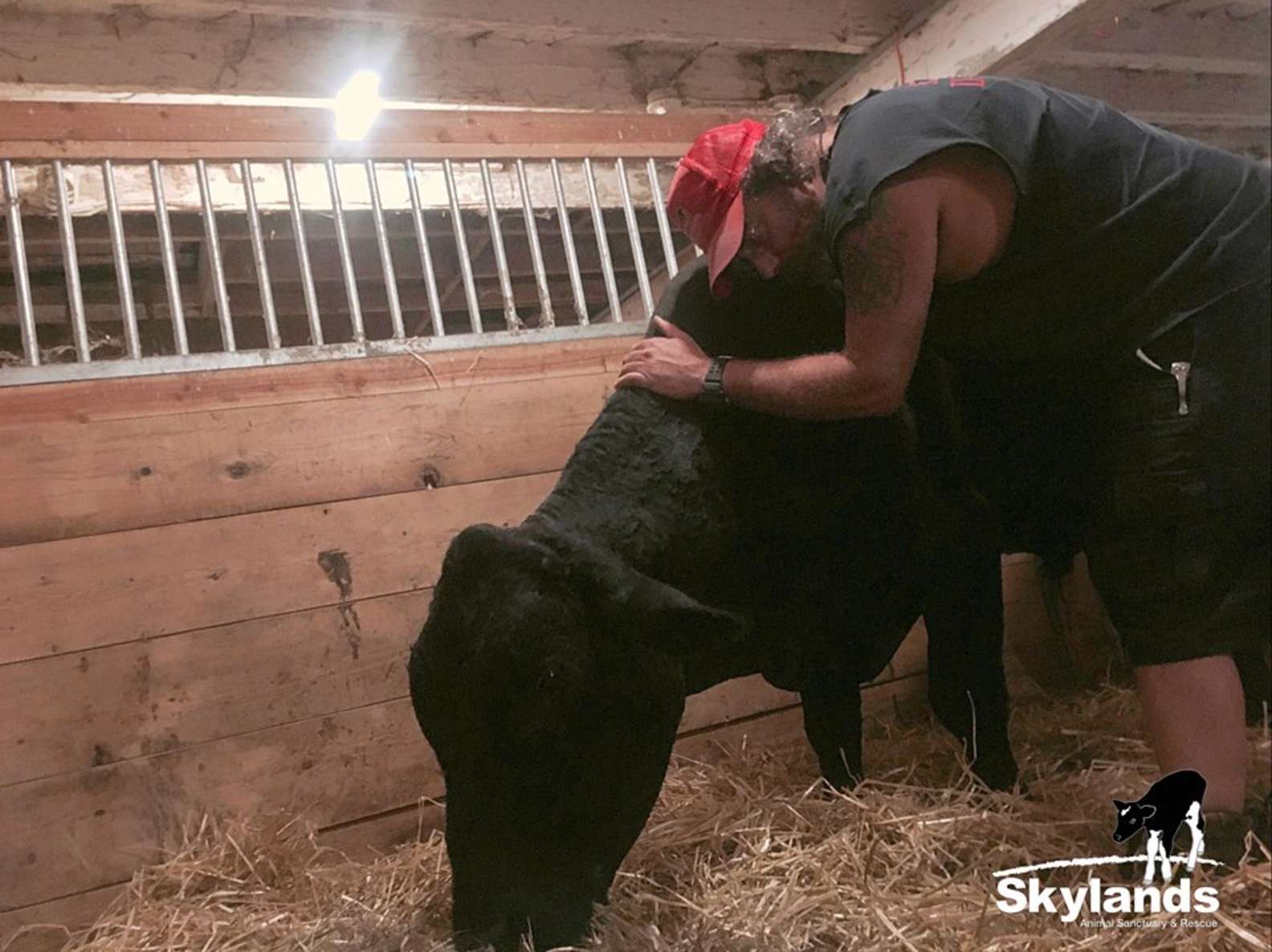 “Babe is the same breed as her, and they both came from hurricanes,” he said. “If they bonded, I think that would be pretty cool.”

Whatever happens, Stura is sure the cow will be very happy at the sanctuary — and he’s grateful for the people who helped make her rescue happen.