Recently, TikTok user @ketophoria, whose real name is Teresa Hwang, shared her heartwarming story of love that is greater than any fear, which has been viewed by 1.6M people and gained 449.9K likes in just a few days.

The 51-year-old elementary school Special Education teacher from Oakville, Canada has been bitten by a dog twice, which led to a severe fear of dogs for most of her life… until she met Boo, a shelter dog who was afraid of people. It was a match made in heaven to grow and overcome fears together. In those couple of years, they both had to take baby steps and surround each other with patience and unconditional love to gain trust and develop a friendship like no other. 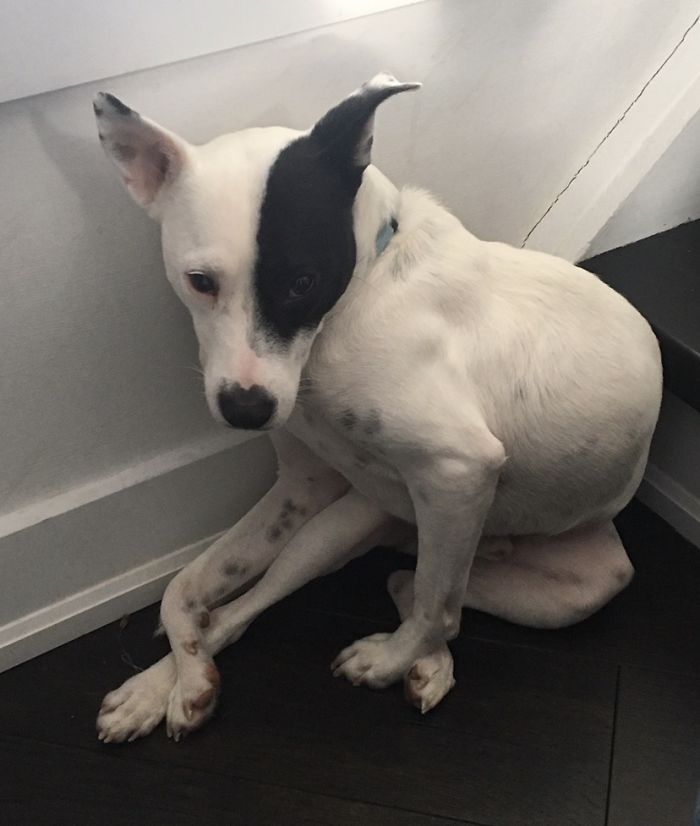 “Sometimes, I still can’t believe I have a dog, much less love one as much as I love Boo. I tell people he’s like the son I never had. I don’t just love him because he loves and needs me. I love him for who is, exactly as he is, for all he has overcome and for the joy he has brought into my life,” Teresa Hwang told Bored Panda and shared the whole touching story with us.

“I have been afraid of dogs for most of my life. Having been bitten by friends’ dogs at the age of 10 (on the forehead) and the age of 20 (on the leg), I had developed a dog phobia that I was able to manage mostly through avoidance. I would cross streets to avoid walking past leashed dogs, did not enjoy running outside, and would ask friends I visited to put overactive or barking dogs in other rooms. While I could manage and interact with friendly dogs that I became familiar with, regardless of size or breed, I still always panicked if a dog growled or barked, even if it was just playing.”

Even though Hwang’s boyfriend has been asking for a dog for a number of years, the serious idea to adopt one came a couple of years ago, after dog-sitting her sister’s 16-year-old black mutt, Cola, for two weeks. 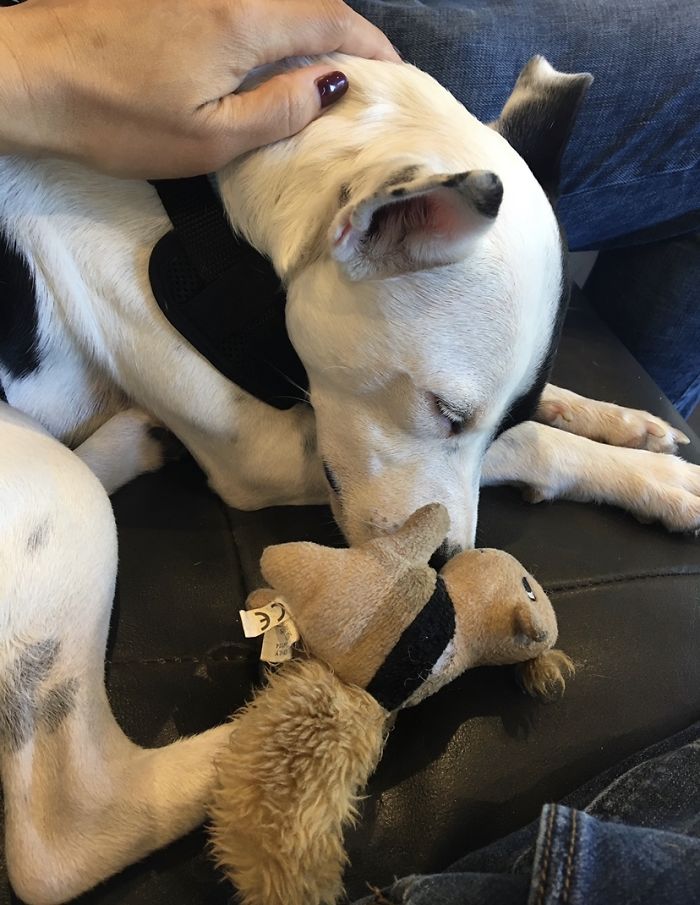 “After researching and reaching out to a numerous rescue shelters, we found a dog named Patches (we later renamed him Boo) at the Niagara Dog Rescue. Boo had been in the system for about 6 months, originally came from Texas (two different shelters there and at least another foster family),” said Hwang.

“Description mentioned that Boo would not be a good fit in a home with a lot of noise, activity or children but that he was great with other dogs. He was described as a ‘Prince of a dog,’ part Australian Cattle dog, who was timid and shy but could show his potential if given a loving home. The description made me think of Aladdin, ‘a diamond in the rough.’”

“When I first met Boo, the first thing I remembered thinking was that he was much smaller than I thought he would be from his pictures. I also observed how fearful and nervous he was. He was sitting on a bench beside his foster mom when we arrived. While I sat on the other end of the bench talking to his foster, I didn’t look at or engage with him at all because I was quite anxious myself.”

“About 15 minutes in our conversation, Boo slowly came out from hiding behind his foster mom and took a few steps towards me. As I turned to look, he gave me one lick on the nose and then quickly retreated and hid behind his foster mom again. His foster mom gave me a surprised look and replied, ‘Wow. That’s really weird, he doesn’t approach people. I guess he’s picked you.’ Right then and there, all my catastrophic and self-deprecating worries that had escalated in the weeks prior to this day, about my safety about my ability to overcome my fear, melted. If he took a leap to initiate a connection, then I knew it was a sign. I had to take him home.

“For the first couple of months, he didn’t engage much. He would follow me around the house but couldn’t approach. He wouldn’t eat in front of us. He wouldn’t touch toys. He walked with his tail between his legs. He paced a lot. He cowered in corners. He flinched and would shake at noises like the washing machine or the furnace.” 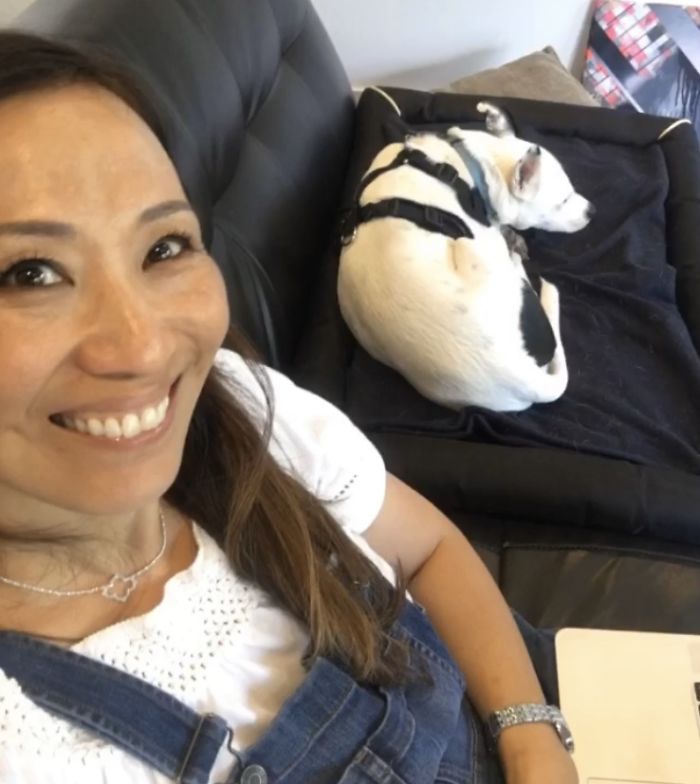 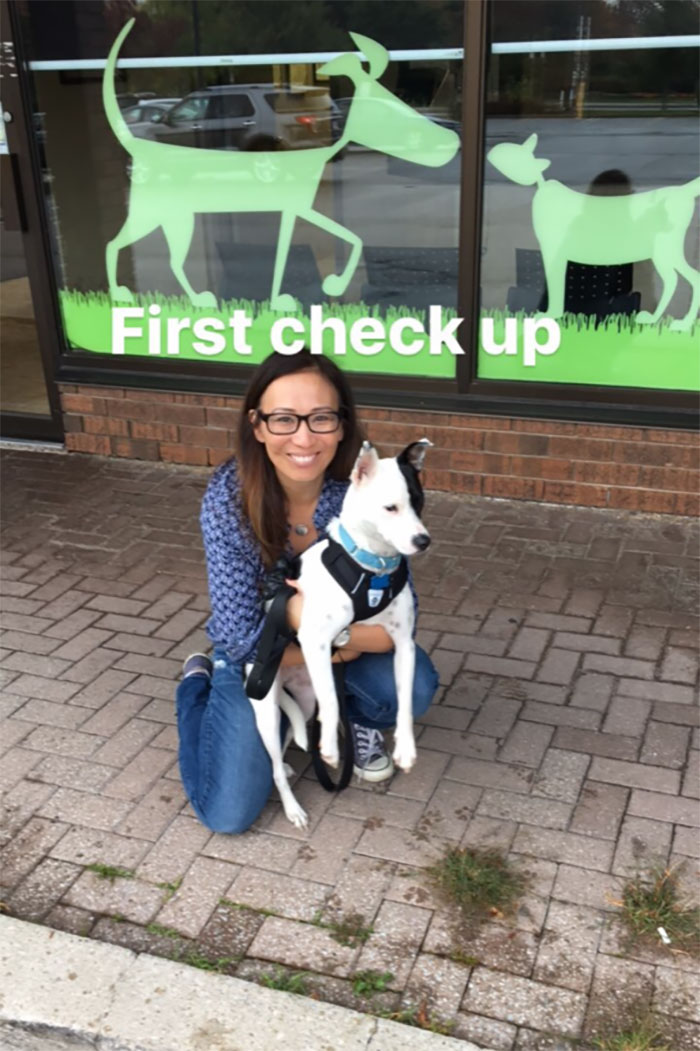 “Unsure about his history, we treated him as if he experienced trauma and worked on creating safety and building trust. We kept to predictable routines and took cues from his body language when not to push him outside his comfort zone. We researched using different anxiety tools (e.g., Thundershirt, Slow feed bowls, Calming spray, CBD oil) and used multiple trainers. He was hard to train because he wasn’t highly food motivated as he often got quite anxious around food (perhaps because he associated food with pursuit or punishment).”

“Then eventually, he started to feel safe, I noticed his tail started to wag on walks. He started to eat in front of us. A few weeks later, he licked me on the nose. A couple of months later, he started to play with a ball. Then, I heard him bark for the first time in excitement in our back yard. With each milestone I witnessed, I cried happy tears because it was as if Boo was a puppy again and was learning ‘how to dog.’”

“He’s not your typical dog. He still paces if people are moving around the house. He doesn’t get motivated by treats. He darts from rustling leaves on windy days. He doesn’t ever come to the door to greet you. He won’t jump on your lap to cheer you up. He’s not super friendly. He doesn’t like being pet by strangers. But Boo has made so many gains in the past 2-1/2 years since we first got him.”

“When he feels safe, he is happy. He makes eye contact now. He approaches and makes funny groaning noises that he’d like to be pet. He won’t initiate cuddles but lets me pick him up and relaxes into my arms and shows he’s happy by licking my face. He’s learned how to sit and fetch, go to his place for food, and happily goes into his crate to sleep at night. He wags his tail and smiles when you ask him if he wants to go for a walk and he is the King of tag at the dog park. He’s learned a lot and I am so proud of him.

“People also ask if I have gotten over my dog phobia. Well, I’m not afraid of Boo―even when he barks or growls to communicate excitement or discomfort. But I’m still nervous around other dogs I don’t know. But it’s better. And I know that if a dog came after Boo, I would protect him. Because Boo isn’t the only one who has changed. Seeing Boo heal and grow has changed the way I see myself. Just as with my own children, taking care of Boo has taught me patience and unconditional love.”

“Teaching Boo has also changed the way I see many of my students. I’ve realized now that many times behaviors like defiance or aggression or avoidance or shutting down are all tied to the same thing―anxiety and fear. Fear is a powerful emotion. It prevents you from taking risks, from trusting others, and believing in yourself. Building relationships first―creating a sense of safety and trust really is the most important thing. When people praise me for saving his life saying that I rescued him, I always have the same response, ‘Boo rescued me right back’. We overcame our fears together. We healed each other. We showed that love is greater than fear.”