How do you propose to a dog lover? If you thought about putting a leash on them instead of a ring, you were wrong and have serious problems. Good thing Maurice Goldstein doesn’t have a twisted mind like you do and has found the perfect way to ask his girlfriend Laura Stamper to marry him. 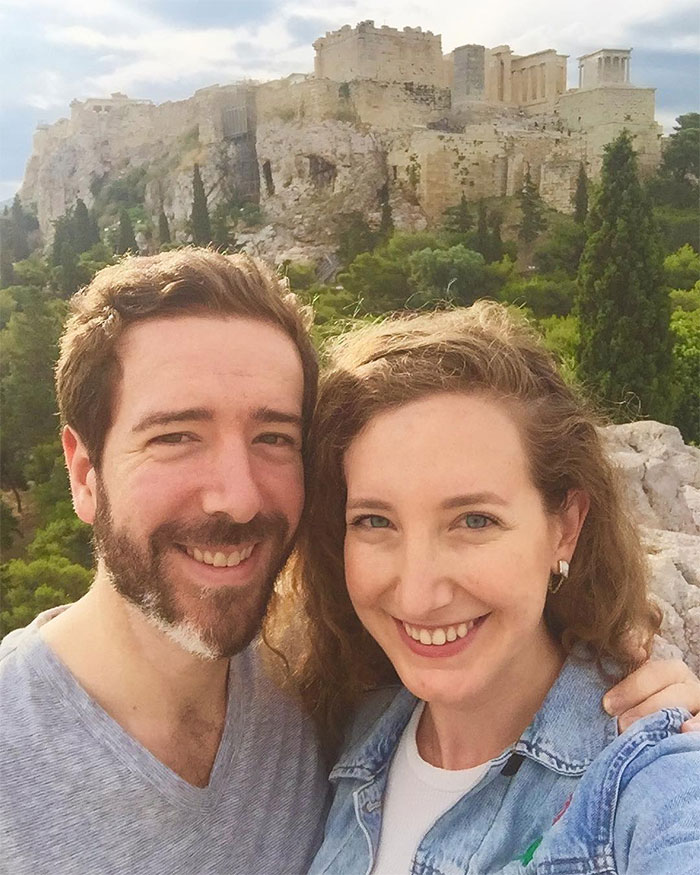 Maurice got Laura’s friend Rebecca Yale to meet her for lunch on a trip to Los Angeles. Yale, a wedding photographer, later excused herself, explaining she had to meet a client. Little did Laura know, she was the client. Laura and Maurice have been dating for over 4 years. The couple live in New York City but were in LA for Thanksgiving. Maurice suggested to Laura that they go on a hike, and when they came to the lookout point, everything started unfolding. 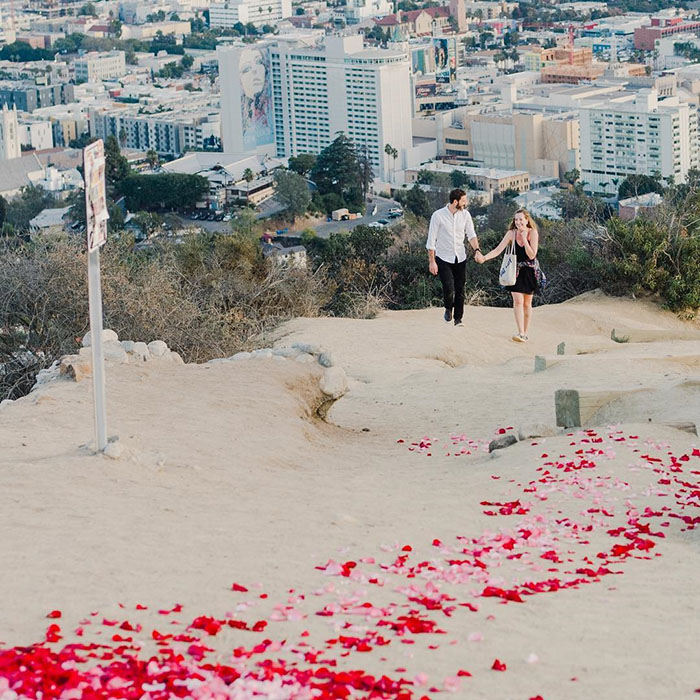 Maurice also had a friend bring along some therapy dogs called ‘Pack of Hearts.’ Moreover, he made sure the gang were standing nearby to make sure the moment was straight out of a fairytale.

“It was all incredibly meaningful,” Stampler told Bored Panda. You see, she loves dogs so much, they’ve even influenced a book she wrote, Little Black Dresses, Little White Lies. “[In the book,] there’s an assortment of dogs and weird dog-related events. Like a pug prom. And a Bark-Mitzvah.” 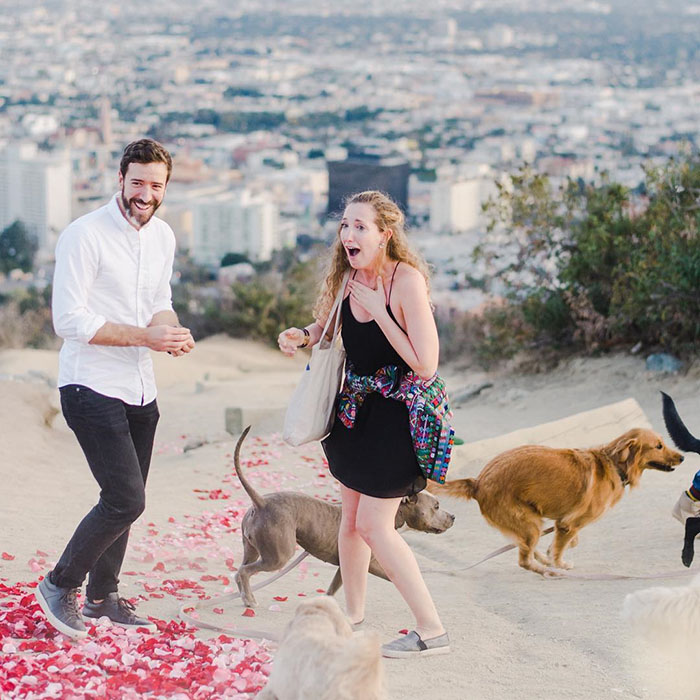 There were rose petals, and an acapella choir covering her favorite Disney songs.

As you can probably guess, Laura said ‘Yes.’ And it was then when the dogs were unleashed. ‘Cause that’s way better than releasing doves!

“Although some wondered if there were too many elements during the proposal (a capella, hike, rose petals, loose dogs?) Maurice executed it perfectly. (He even hired Task Rabbits to park in front of the hiking trail to save spots for people who were involved.) It was all incredibly meaningful and we then celebrated with both of our families at a restaurant after.”

By the way, remember Laura’s friend Rebecca? She was also there to capture it all. 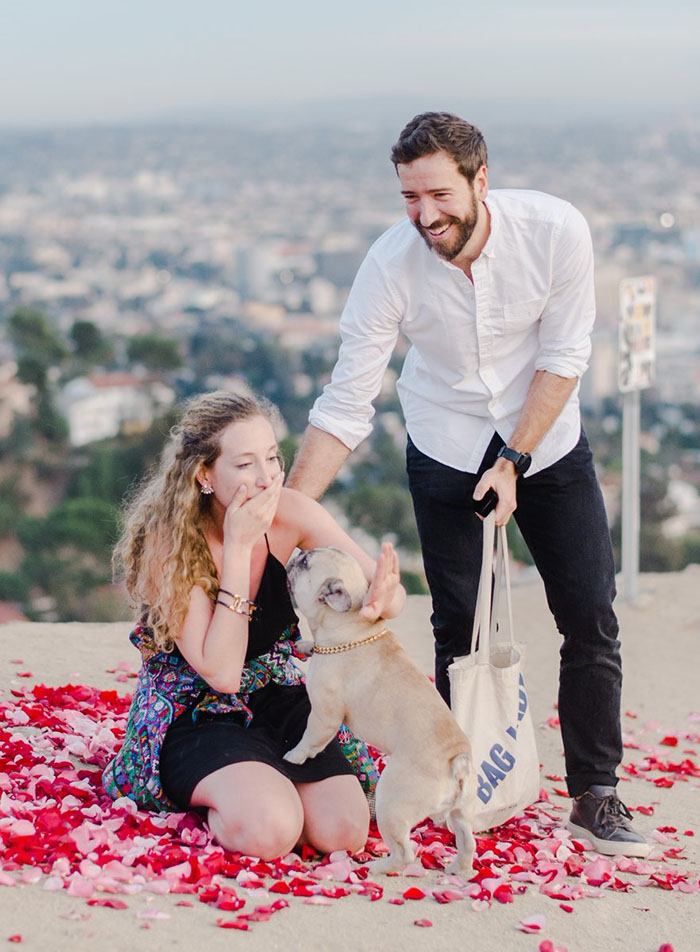 Laura and Maurice met in the summer of 2011 when they were both seeing other people. “We would randomly run into each other (walking to work on Broadway, on the way to brunch with friends in Chelsea) over the years. I always felt drawn to him — in the back of my head, I knew that we could be really compatible — but knew I wasn’t ready yet. I honestly felt like if we got together, it could be the real deal.”

“Then, like any good millennial, we reconnected over dating apps,” she continued. “Although the story’s slightly more interesting than that. So, I was covering the intersection of tech and culture at Time magazine, and in 2014 that meant dating apps! I’d written a mag feature on my own personal experiences and then would do a bunch of web write-ups on every new study/update/etc.”

“Tinder had just launched a new feature, so I went on my work phone to check it out,” Laura added. “I must have seen Maurice and swiped right to say hello — but then un-downloaded the app on my phone once my story was done because I was in a (not-so-great) relationship at the time with someone who… treated me not-so-great-ly. (Also: He argued to keep Tinder on his phone during the relationship… younger Laura, read the room.) Suffice it to say, we didn’t work out.”

“Months later, when I was ready to date again, I re-downloaded the app and up came a really old message from Maurice. I sent a very delayed response, he texted to ask me to drinks, and the rest is history. I haven’t gone on a date with another person since.”