There are many different ways modern society does wrong for this planet, including harming animals who can’t protect themselves from our powerful weapons and cruel minds. Even though there are many people around the world who dedicate their lives to save those who are unable to do so themselves, there still is a long road ahead in battling illegal ways people are killing our planet.

But sometimes, no matter how many bad things are happening in this world, there are still people that can restore our faith in humanity, and the rangers at Virunga National Park are some of those people. 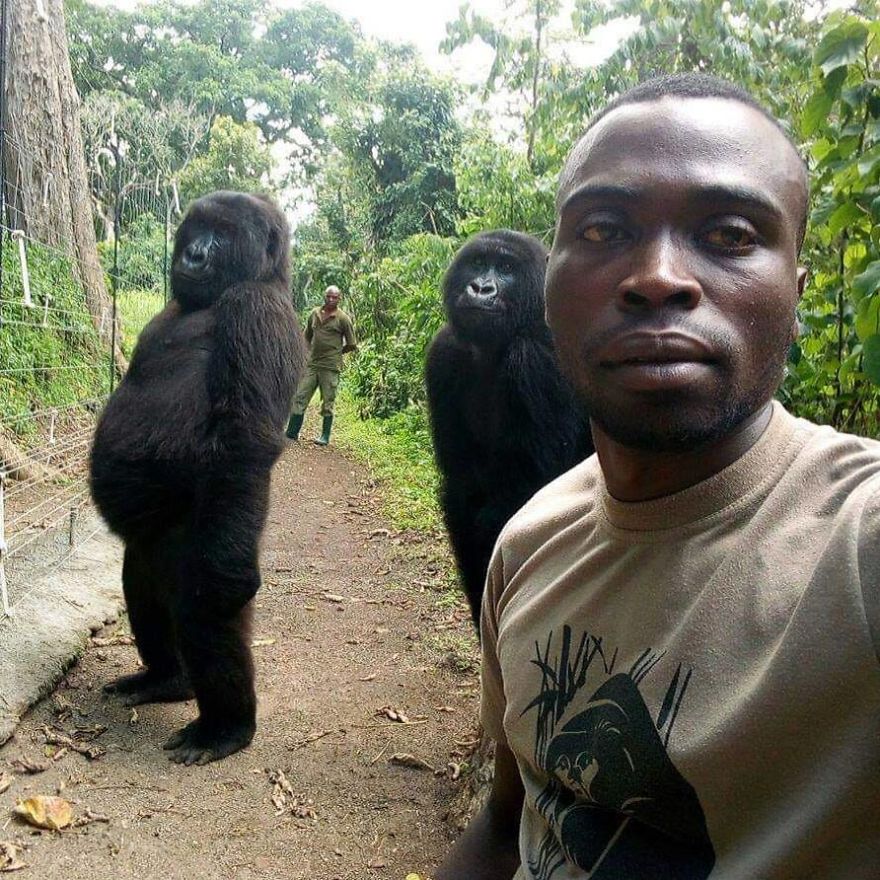 The now-viral photo shows one of the park rangers posing together with two gorillas who live in the National Park, safe from poachers or any armed conflicts that may affect their wellbeing. Virunga National Park is a UNESCO world heritage site that is protected by a dedicated team of more than 600 rangers. In the past, this place was deeply impacted by wars and armed conflicts that not only disturb the lives of humans but wild animals as well. Gorillas are also poached for many reasons such as food, traditional medicine, and the black market bushmeat trade. Rangers are fighting to protect these poor animals, and their incredible bond is clearly visible in the photos. 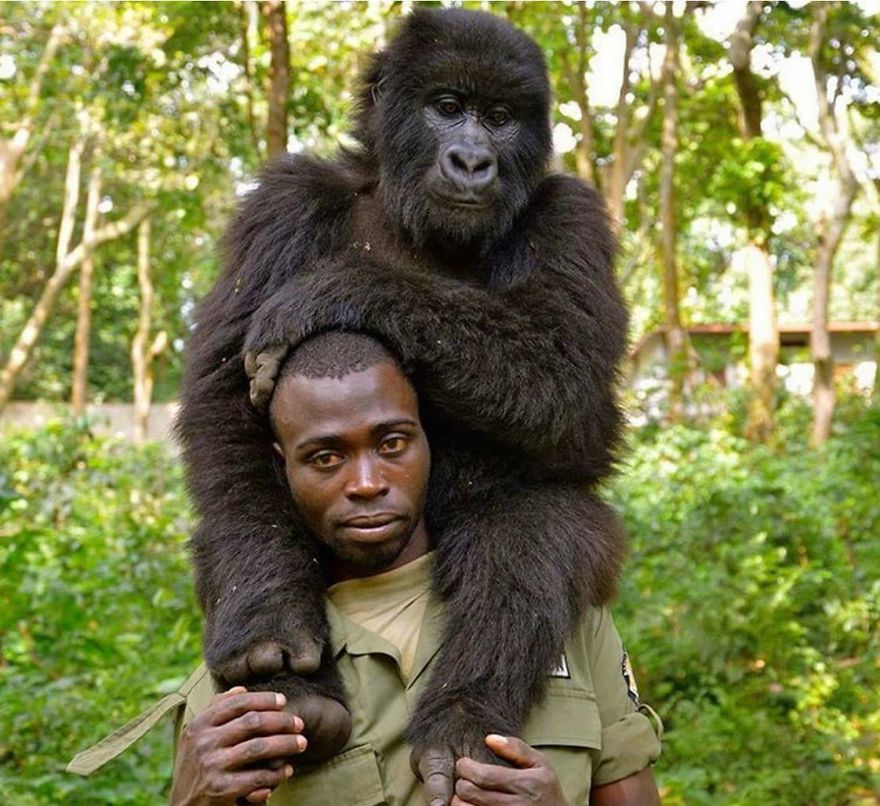 All of the rangers must undergo intense training since their incredibly dangerous job aims to protect the park’s endangered species. Please consider donating to the park since every single donation has a huge impact. According to Virunga national park, a single donation of $8 allows them to buy a pair of new boots for the ranger, $32 funds a ranger, and their family for an entire day and $150 allows the park to feed an orphan gorilla food and supplements for two weeks.

Having this incredibly dangerous and difficult job is also rewarding since animals show their complete trust for the Rangers, which is clearly seen in the photos.

Virunga national park is one of the world’s most biodiverse protected areas in the world and is home to 218 mammals, 706 bird, 109 reptiles, 78 amphibia, and 22 primate species. Around one-third of the world’s population of critically endangered mountain gorillas live in the park. Rangers fight every day to keep the area safe; in total, 179 rangers have lost their lives while protecting these animals. 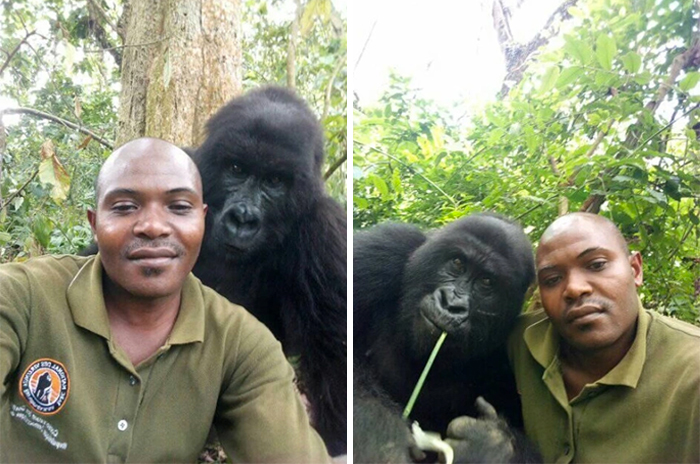 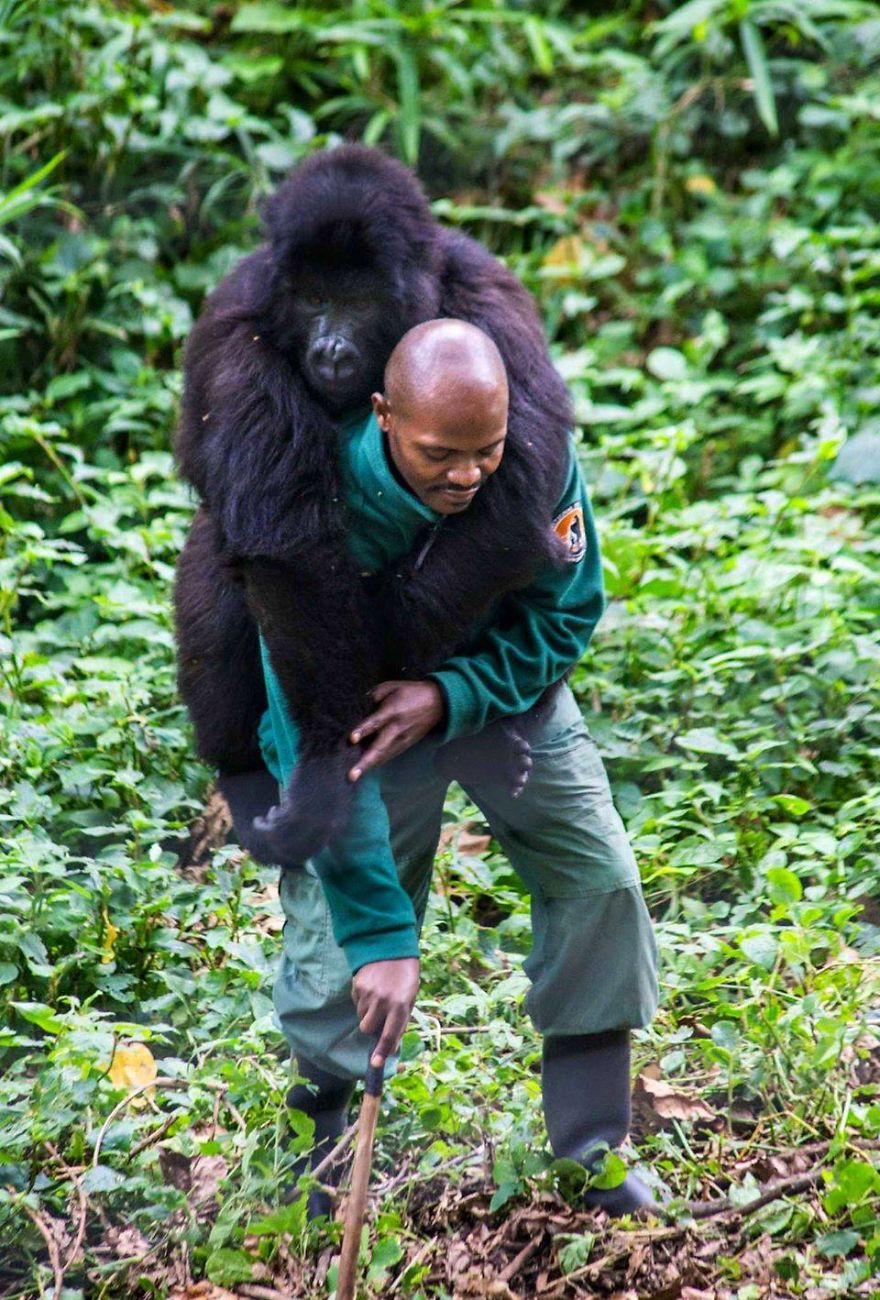 “There is a bond that ties us together. A relationship that is very, very close between the guardians and the gorillas,” says Andre Bauma, the manager of the Senkwekwe Centre. Founded in 1925 to defend its rich biodiversity, the region has the presence of the last 880 mountain gorillas. In 1979, it was classified as World Heritage by UNESCO.

The rangers were captured comforting a gorilla that was incredibly sad after becoming an orphan. Just like many others, his parents were the victims of gorilla poaching that many rangers fight against.