When an orphaned baby elephant named Wass was saved, he wan’t alone. He had two feathered companions by his side who would grow up alongside of him and become his friend and “mother hens” to the other orphaned elephants at David Sheldrick Wildlife Trust’s elephant orphanage in Nairobi. 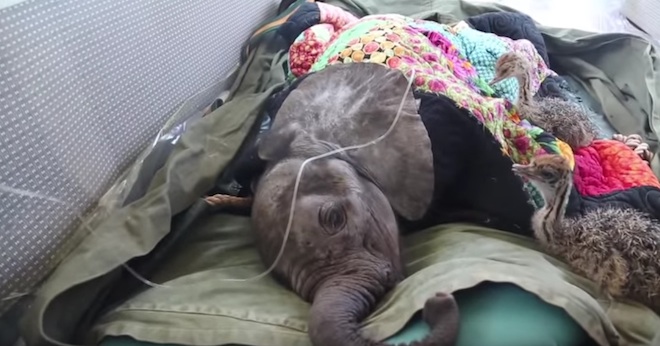 Pea and Pod are two female ostriches who were orphaned as babies and rescued at the same time Wass was. In fact, they accompanied him on the plane that took them all back to David Sheldrick Wildlife Trust’s elephant orphanage in Nairobi.

Wass was around 15 months old when he was found alone by KWS Rangers. It appears he was orphaned because of poaching. With no mother or herd to take care of him, he was going to die unless he was rescued. When the trio of animals arrived at the Nairobi Nursery, they were all settled into their new home.

For the past few years, Pea and Pod have grown up around the orphaned baby elephants. The two birds have become part of the nursery family at the orphanage. And the baby elephants love to chase the birds (although they’ll never catch them). “They provide endless hours of entertainment for the elephants who love to charge them, hug them, and positively maul them,” The David Sheldrick Wildlife Trust writes.

The feeling is mutual and the ostriches, who have now grown up, love playing “mother hen” to the calves, “lovingly letting the little ones suckle on their thighs and protectively enveloping them with their wings,” says DSWT.

“Every morning they eagerly join the Nursery herd for that day’s adventures, and every evening they return to their stable between Ngilai the elephant and Kiko the giraffe.” 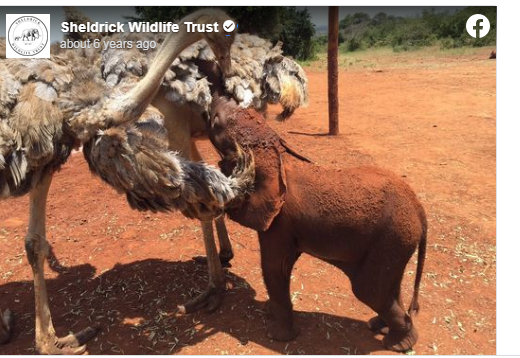 “Pea and Pod have grown up with our orphaned elephant herd ever since, and are now an intrinsic part of our Nursery Unit,” DSWT writes. “Although taller than their elephant peers…[these] feathered friends remain very protective of the herd! It is a most unlikely combination which has formed an enchanting inseparable friendship.”