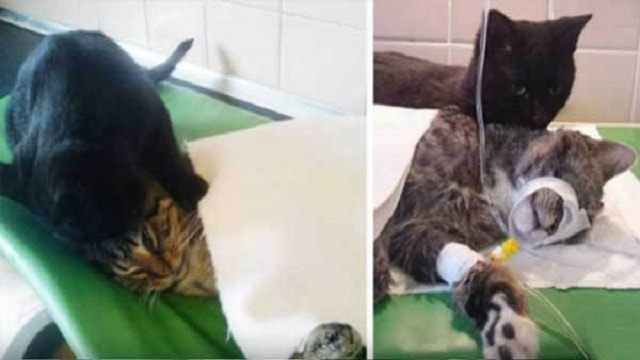 Radamenes, a sweet little black cat, was only two months old when he was discovered by his rescuers. Last year, the little kitten was taken into a veterinarian clinic in critical condition. Veterinarians believed this small cat wouldn’t make it because of a severe upper respiratory illness and were preparing to euthanize him – but then he began to purr.

They decided to start therapy since it was an indication that he wasn’t ready to give up on life yet. Thank god they did, since Radamenes is now repaying the favor by assisting other animals at the shelter in their recovery. After regaining his health, Radamenes began to make friends with the other animals in the sanctuary.

There are numerous tourists to Bydgoszcz, Poland, who wish to see Radamenes’ loving method for themselves. In addition, like any good nurse, he’s always eager to help anyone in need of a warm and kind hug.

The veterinarians at the shelter joke that he’s a full-time nurse.

You can watch the adorable video here!