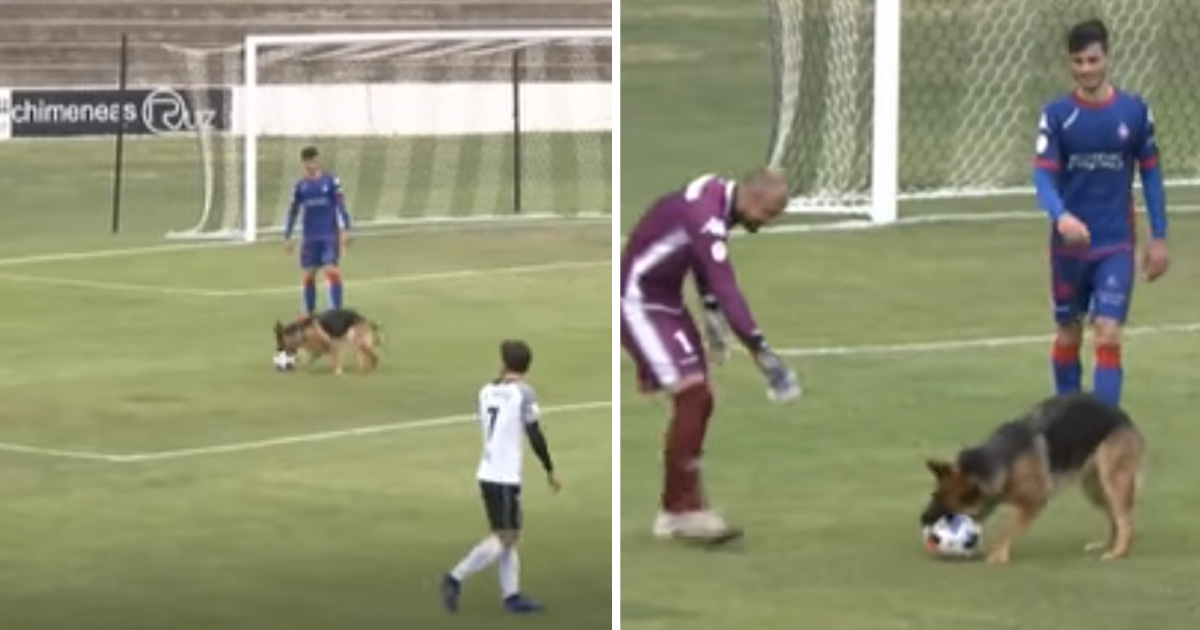 Jorge León’s dog shocked him in Spain, specifically in the city of Tudela, when he performed a strange act that made her a social media sensation.

Jorge chose to take a walk around the streets of his neighborhood with his German shepherd dog, Jara, but he had no clue that he would become a celebrity. The initial idea was to go for a simple walk, but they ended up passing through the city’s football stadium in the middle of it.

At that precise moment, Jorge was watching a very entertaining soccer match between CD Tudelano and SD Amorebieta, which drew his attention.

When a dog watches a game, he becomes a famous.

Jorge and Jara sat down for a bit after locating two good viewing locations to watch the game. The game was fantastic, but Jara’s attention was drawn to something in specific: the soccer ball, which he did not let go of.

“She was really charmed by it since she first saw it.”

Jara’s intention, though, did not appear to be to simply watch the ball roll, and he received the opportunity he had hoped for in a couple of minutes.

“They opened the entrance that connects the soccer field to the outside world with 10 minutes left [to play].” Jara’s face brightened up, and she made the decision to enter.

Mikel Saizar, the visiting team’s goalie, was going to make a play with the ball in the 80th minute of the game. The goalie had no idea what was about to happen, but Jara rushed in unexpectedly fast and kept the ball.

Jorge’s dog had entered the field of play and grabbed the ball like a pro, as if she knew what she was doing.

The players, spectators, and other people were all taken aback by what was going on, and the game had to be stopped, but no one seemed to mind.

The goalie used the ball to grab Jara’s attention and tossed it off of the field after he decided to run around the field of play. The loving dog ran after the ball, and Jorge was able to capture it in the blink of an eye, putting a stop to his strange prank.

The soccer match could be restarted with a new ball, but Jara had already established himself as a popular sports celebrity.

Footters, a streaming site, recorded the funny incident and chose to share it on social media, where it quickly went viral. The video has already received over 320,000 views, thousands of responses, and hundreds of comments praising Jara’s skill in such a short period.

Everything is anecdotal, according to his owner, but after the video was released, many people contacted him to learn more about Jara.

Jorge expressed himself as follows:

“We thought it was funny at the time, but we had no idea it would go that far.”

Many people were blown away by Jara’s talent, and while everyone was taken aback, Jorge clarified that it is something he performs on a regular basis.

«She is very well at home since she has been trained. But when we get to the park, she’s all about the balls ».

Jara returned to the soccer stadium, but this time she was invited by the local squad, so she could spend more time with the players and enjoy their company.

Jara will definitely be remembered as a soccer icon who displayed his real love for the game.