Doodlebug is an orphaned kangaroo at a refuge in New South Wales’ Northern Rivers region. A heartwarming photo of a beautiful young joey taking solace in a teddy bear has recently gone viral on the internet. 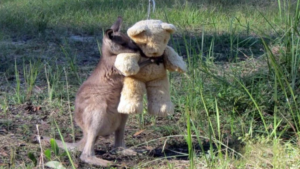 Tim Beshara, an aide to Greens senator for Tasmania Peter Whish-Wilson, first posted the lovely photo online. In a tweet, he revealed that his mother, Gillian Abbott, had been caring for the child since it was a few months old. “He could have slipped out of his mother’s pouch,” the guy speculated. 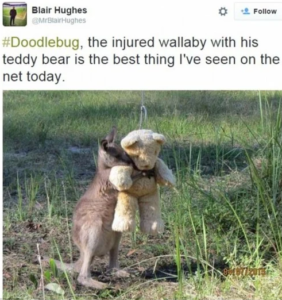 “He was a few months old when he was handed to WIRES, my mother’s animal rescue organization. She nursed it back to health, and it is now hopping throughout the woods, occasionally returning for a food or a cuddle.”

Tim’s mother decided to provide some additional comfort to the orphaned animals she is caring for by hanging teddy bears about the yard. It turned out to be a fantastic concept. “They appear to respond to the toys in much the same manner as a child would,” Tim Beshara said. “They treat it as though it were a companion.”

The poor puppy must be missing his mommy terribly.