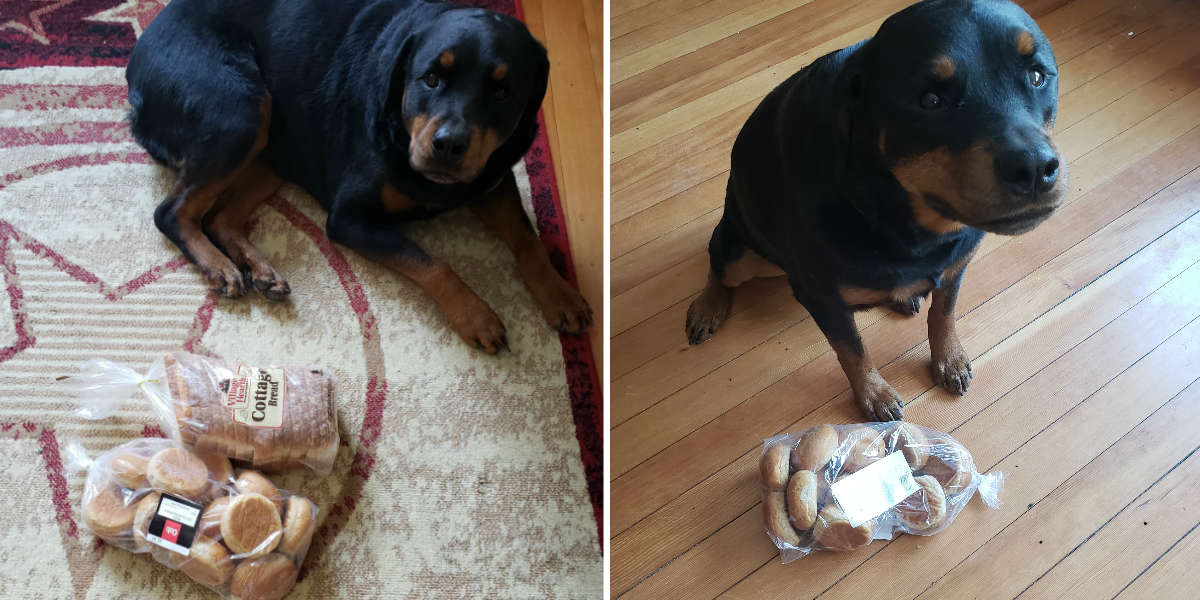 Some puppies make good guard dogs, but Jakey, a 6-year-old dog, uses her abilities to defend something a little different.

While most dogs keep an eye on the home, Jakey has a more logical aim in mind. When her family is gone, she keeps an eye on their bread. Jakey’s mother, Katrina Frank, told The Dodo, “She started this four years ago when we moved to our property.” “She would hide the bread every time we left.”

Jakey has a great sense of smell when it comes to baked foods. Jakey smells the plastic-wrapped loaf the moment her mother goes out the door, and she will stop at nothing until the bread is secure.

Frank explained, “We have a bread box, so she likes to hop up and grab it out of there.” “If I put it in the pantry, she nudges the door open and takes it out.” I’ve put it in the fridge previously, and she’s opened the door to retrieve it.”

Jakey has never had a bite of bread in her years as a bread guardian. She also ensures that none of the other animals in the home do.

“She loves to stow it behind the sofa and lie next to it. Otherwise, [she] stashes it in my bedroom closet,” Frank explained. “Because we use it so frequently, I believe she thinks it’s the most essential thing to us.”

When Jakey’s mother returns, the dog takes her to the bread, a regretful expression on her face. Frank has become accustomed to Jakey’s eccentricities and knows that the bread will never go missing for long. Frank remarked, “I’ve always been like, ‘Oh, that’s Jake being Jake.”

Jakey doesn’t let the fact that her family is out of bread stop her from performing her job: “If I’m out of bread, she moves on to baked goods,” Frank remarked. “At one point, she got a Tupperware of cookies off the counter and concealed all 17 of them individually without breaking a single one. She took me to every single one of them.”

Jakey switches to guarding the butter whenever the household runs out of any sort of starch.

Frank can be certain of one thing: their food will be secure as long as Jakey is around.