An 11-year-old dog named Charlie has formed an adorable bond with a 4-month-old puppy, who serves as his guide.

Charlie is an 11-year-old golden retriever who had to have both eyes removed due to glaucoma.

But that hasn’t slowed him down one bit because Charlie is the rare canine who has his own “Seeing Eye dog.”

He’s got a good buddy named Maverick, a 4-month-old puppy who helps him get around now that the two have formed an adorable bond. 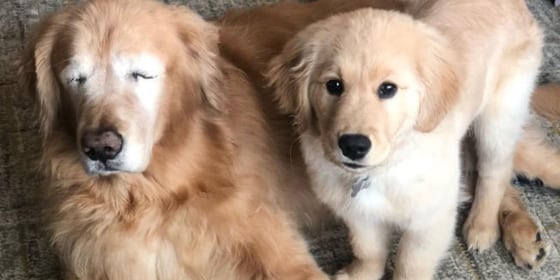 Owners Adam and Chelsea Stipe had Charlie’s left eye removed in 2016 as a result of pain caused by glaucoma, and then his right eye a year later for the same condition.

The couple added Maverick to the family in January, and after some initial friction with Charlie, he soon became the older dog’s helper.

“When Maverick and Charlie play, it’s definitely great to watch because Charlie turns into such a puppy,” Chelsea Stipe told TODAY. “It’s sweet to see them get along and enjoy each other.”

Maverick will often walk closely with Charlie to help make sure the blind dog gets around without any problems.

“When they would play, Maverick would realize that Charlie would lose the toy sometimes, so (Maverick) would pick it up and put it back in front of him to re-engage playtime,” Stipe told NBC Philadelphia.

They created an Instagram account showing the best buddies spending time hanging out and playing together at their home in Mooresville, North Carolina.

“We have definitely been overwhelmed with the response, but it’s such a good thing,” Stipe said. “We love how positive the community is and how happy (the dogs) are making everyone.”

Dog lovers can’t seem to get enough of their heartwarming friendship, as the account has already gained more than 32,000 followers since it was created on Monday.