Apollo was a frightened puppy when he arrived at Texas Animal Care Services in San Antonio. He cowered in his kennel and his posture was one of utter fear! When a photo of him was published it broke the hearts of animal lovers.

Someone had obvious abused him in his past and he was in very poor health. Although he was a dog with many problems both physical and mental, a family decided to take a chance on him and took him home. 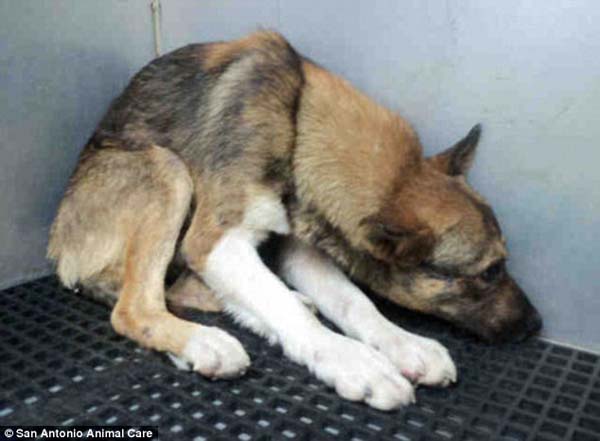 Vets told the couple he had not been socialized early enough and would probably never make a good family pet. They also diagnosed him with deadly distemper.

Megan Cook refused to leave him at the vets knowing he would hate to be put in a cage again. She wrote the Examiner and said:

“We brought him home, and we gave him food, and a bed, and everything a puppy wants. You should have seen how excited he was when we fed him in those first few months.

“He recovered entirely from his illness. Slowly, he became the best dog, even at times very cuddly. His favorite thing on the planet is our morning walks.

“He is loving, confident, and sweet – the perfect family pet.

“He is our tiny dachshund’s best friend in the world. Recently we had a baby, and from the moment we brought our baby home, Apollo adopted the baby as if he were his own puppy.”

It’s so amazing to hear that despite all the obstacles Apollo faced and the prejudices he encountered, that he overcame all the odds!

Here is a beautiful before and after photo of this sweet dog: