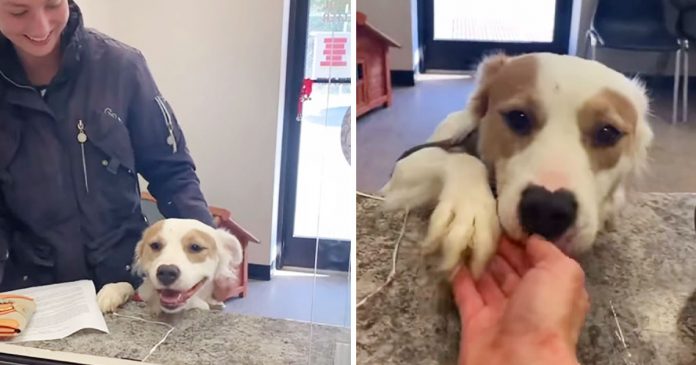 Ava is a beautiful puppy that was surrendered to the Hoke County Animal Shelter in North Carolina. Her expression was sorrowful, since she had been handed to the rescue center by her former family, and her life was about to change significantly. A major twist in her narrative, however, soon brought Ava joy.

According to Kristi, who spoke to The Dodo,

“Understandably, I was scared and depressed. We became buddies after spending time with her.

A visitor to the shelter saw Ava and her tale and immediately fell in love with her; he felt he could provide her with the home she deserved and all the affection she so desperately needed. The cute little dog’s fortunes were changing for the better.

Kristi, who had been present to greet beautiful Ava when she arrived at the shelter, was now seeing her ready to leave for her new home, and she was beaming. Even in the midst of her joy, Ava took a minute to thank Kristi; the dog extended her paw in appreciation to her caretaker for all of the affection she had shown her since her arrival.

“When they adopted her, she offered me her paw, which was extremely nice.”

Although Ava’s prior family’s decision to abandon her at the shelter was heartbreaking, it was merely a pit stop on the route to a new and better life. Thanks to Kristi’s and the shelter’s help, she now has a family who looks after her and showers her with love.