On 1980, the Pacific Whale Foundation was established in Maui, Hawaii, to save humpback whales from extinction. Since then, we’ve expanded our efforts to include studies in Ecuador and research and whale watching in Australia. Although whale season in Hawaii will not return until later this year, it has just begun in Ecuador! 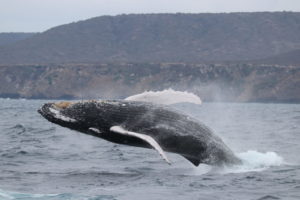 Off the coast of Puerto Lopez, a humpback whale. Machalilla National Park granted research permissions for these operations.

The season’s first whales have arrived in Ecuador’s Machalilla National Park (in Puerto Lopez), where PWF conducts research!
Dr. Cristina Paola Castro, PWF Ecuador Programs Director, has been invited to speak about PWF’s research projects in Ecuador and the history of how whale tourism has changed the reality of Ecuadorian coastal towns at the Puerto Lopez Whale Festival as well as media outlets such as radio, television, and social media. Cristina began her humpback whale field research in early June, which will continue for the next few months.

During whale season and throughout the year in Ecuador, we’ve been collecting data for a number of scientific studies that could help safeguard marine mammals in the area.

Fisheries interactions and bycatch are a severe threat to whales and dolphins in Ecuador, according to our research. Several species of cetaceans have become entangled and drowned in gill nets, and marine mammals have even been detected in improvised fishing equipment used as bait. We created a community reporting network for this study, which is critical for documenting stranded and entangled marine mammals. Our researchers are collaborating with specialists from around the world to address entanglement in Latin America, as well as developing mitigation techniques and providing assessment and response training to the on-water population.

Status, Threats, and Conservation of Dolphins in the Eastern Pacific is the name of the project (2021)

In the coastal seas of Ecuador, there is very little research on toothed whales and dolphins, and in Machalilla National Park, there is very minimal research. We’ve seen a lot of coastal bottlenose dolphins with injuries from humans, and our partner has seen a big drop in surrounding dolphin populations. We want to make the first record of coastal bottlenose dolphin abundance and distribution in Machalilla National Park so that these populations may be managed and monitored for changes. We also intend to compare and contrast dolphin status and health in a protected area (Machalilla) against an unprotected location (the waters to the north and south where declines have been documented). We will collaborate with local agencies to provide ongoing monitoring and, if necessary, recommend new management techniques, such as enlarging the protected area, based on our results. 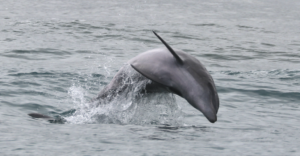