“This is what a dog that has just been abandoned looks like,” wrote the animal shelter I Paw’d It Forward from SW Washington in a caption on Facebook two days ago. The video footage showed a Tesla car pull up on the side of a freeway with an excited Labrador getting out, ready for a stroll in the park. As the happy boy is wagging his tail, the owner seems to lure him into the wooded area before she jumps back in the car and speeds off.

Watching the cruel scene has made many people on social media tearful, but luckily, the boy was rescued and well cared for by the staff at I Paw’d It Forward. The non-profit reminds everyone that this case is a constant reminder not to stay indifferent and follow their motto: “If you see something, say something.”

Bored Panda reached out to Brandon Price, a man from Vancouver, Washington whose security cameras recorded this disturbing incident. “We have seen a lot of things on our cameras, and this is something we never expected to see. Nor ever wanted to see,” said Brandon in an interview that you can check out in full down below.

Brandon told us that his girlfriend called her friend to come help her get the abandoned dog, whose name is Henry. “After they got him, they contacted I Paw’d It Forward animal shelter to come to get him and take him to the humane society.”

The couple then posted the footage recorded on their security camera on Facebook. “Little did we know it would be going viral worldwide,” Brandon said.

“We were both in complete shock when it happened. We own the whole cul-de-sac and have had some issues with people in the past. That’s why we installed the camera,” Brandon explained. But this is something they never expected, or ever wanted, to see.

Brandon said he can see why someone might not expect such a cruel act from someone who drives a Tesla, “but honestly, over the years, I have learned to never judge a book by its cover.” He also added that we all should be aware there are “some ugly people out there.” 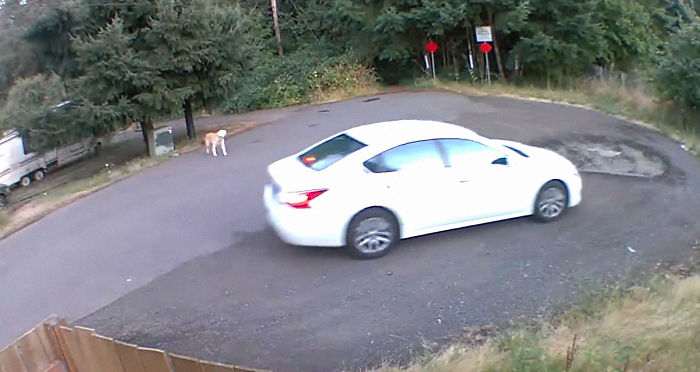 The footage has showed that these cruel incidents happen daily. “We are showing people that someone will take their family dog of 13 years, drop him in some random area, and drive off like its nothing. Its insane.”

“There are numerous things this lady could have done. Hell, she could have just knocked on our door and left him,” Brandon said and promised there will be a happy ending to this story. “I can’t just let this story end here,” he concluded.