Some stray doggie families get lucky and are taken care of as a full and happy family despite being strays, like Lil’Mama and her 15-puppy litter which Bored Panda covered recently. Other stray canine families, however, aren’t as lucky, and are often broken up with the younglings wandering off and ending up living alone on the streets, subject to danger.

Well, this does not stop them from finding a new family, as this one young pupper decided to do by simply choosing this one family’s porch and lying on it, resting until someone came over to help the puppy. 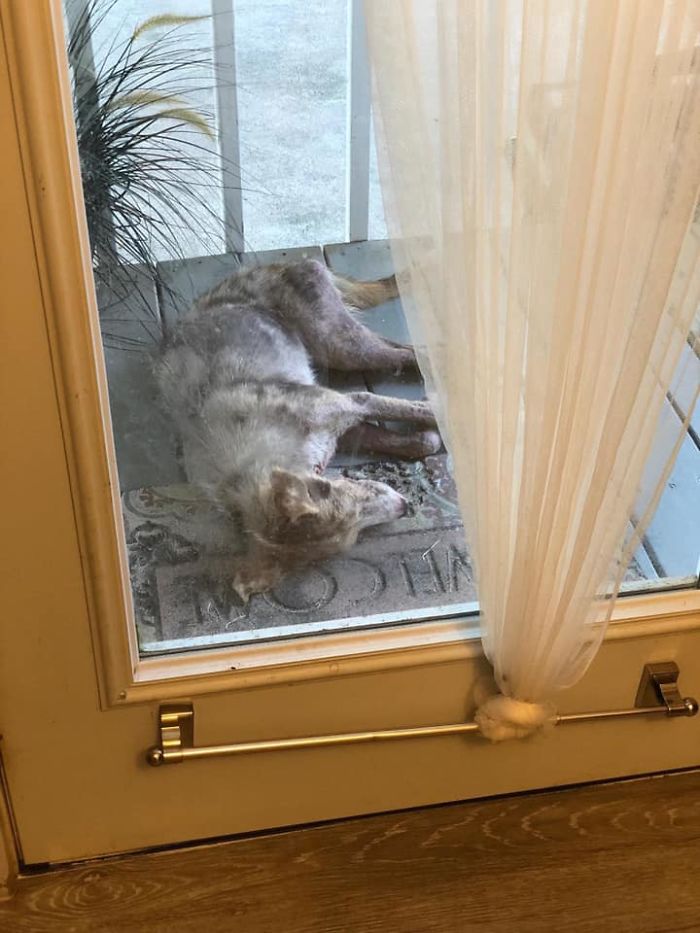 Meet Lila, the 4 to 6-month-old Australian Shepherd pup who was recently found chilling on this one family’s porch on August 3rd in La Porte, Greater Houston Area, Texas. She was seen wandering the streets and stumbled upon someone’s driveway. Given her state, they watered and fed her.

Lila soon noticed a very comfy porch that provided shade, and she decided to lie down on the “welcome” door mat to get some shut-eye. The puppy spent a good several hours just resting there, waiting for something. She simply refused to leave, indicating that something is up and she needs help. 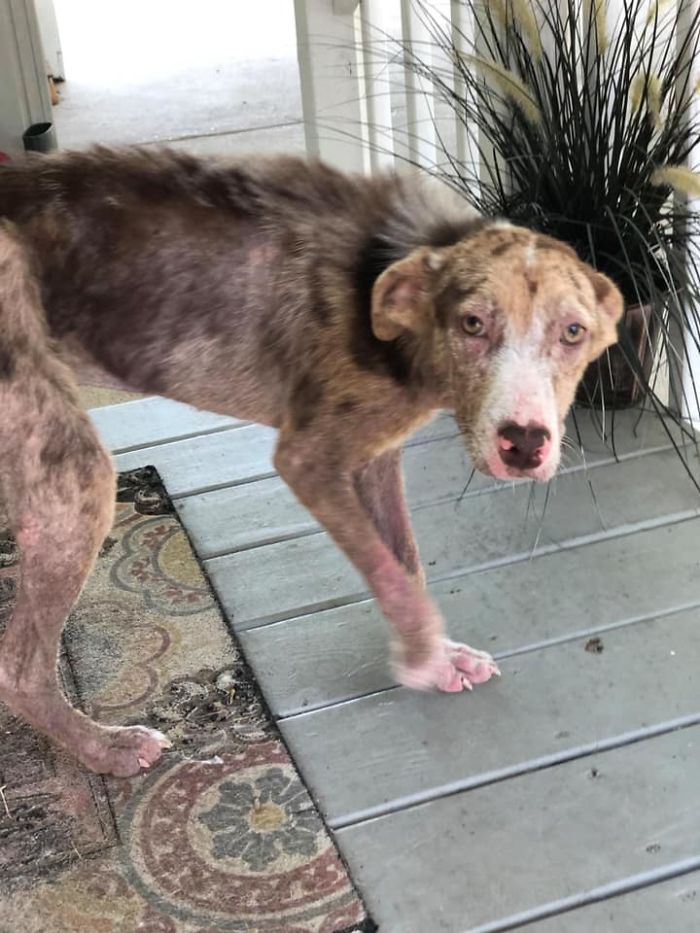 They couldn’t allow the doggie inside, so this prompted the family to get in touch with This Is Houston, a rescue organization dedicated to tackling animal welfare issues in the greater Houston area. A post about Lila soon went public on Facebook. The caption explained the situation:

“This puppy showed up in someone’s driveway in La Porte yesterday. They fed her and she wouldn’t leave their porch. They couldn’t allow her inside and they hoped she wouldn’t wander off while they looked for help.”

“We can’t imagine what she thought as she looked inside the glass, but we are thankful she found a family that would get her some help. One of our fosters couldn’t stand to see her continue sleeping on the porch so she picked her up last night and brought her to safety.”

“She’s a little baby at about 4-5 months old, and she likely has demodex mange. She’ll see a vet tomorrow but today, she’s resting peacefully inside. We’ll get this baby back to health in no time!” 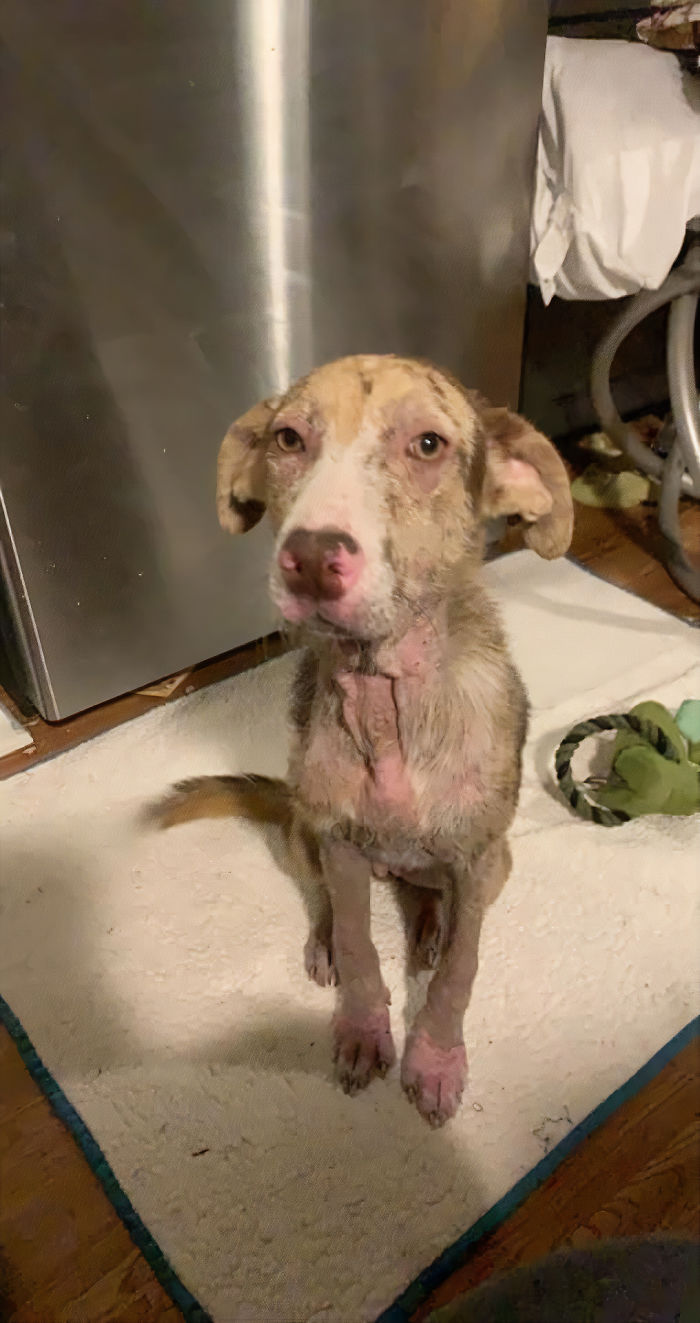 The rescue tagged Kourtney Crenshaw, a rescuer who arrived at the house to pick up Lila. “When I first got there, she was a little skittish, but once I let her smell me, she let me pet her and immediately started licking my face. She would not walk on a leash, so I just picked her up and got her in my car and we headed home,” said Crenshaw in an interview with the Dodo.

Crenshaw explained that Lila seemed like she was ready to be rescued as she was a tad bit scared, but otherwise it was easy to gain her trust and get her to safety.

Lila was soon brought to the vet who took a look at her. It is believed that she’s a 4 to 6-month-old Australian shepherd. She’d lost some fur and her skin was irritated due to demodex mange, a skin condition caused by tiny parasitic mites. However, she has been treated with antibiotics and medicated baths and is well on her way to recovery.

Needless to say, Lila is now enjoying herself at her foster home, getting back scratches, belly rubs, and, most importantly, regular meals, care, and love until she recovers and is strong enough to be put up for adoption and find a forever home.

People on Facebook asked for an update on the story several days ago and This Is Houston responded with a photo of Lila, not wearing a cone anymore with the caption “She’s doing great!”

If it wasn’t for Lila’s sheer determination and the fact that she found the right porch, she would have most likely not found help and remained a stray. And people are happy that she was rescued, calling the rescuers heroes and showering the puppy with love on social media.