In central Kalimantan, Indonesia forests which are home to the two main populations of orangutans are on fire. The protected rainforests have fallen victim to the out-of-control fires caused by mass deforestation to make way for palm oil production. Over the past three months, thousands of fires have caused a toxic haze that has harmed millions of people in Indonesia and is devastating wildlife populations. 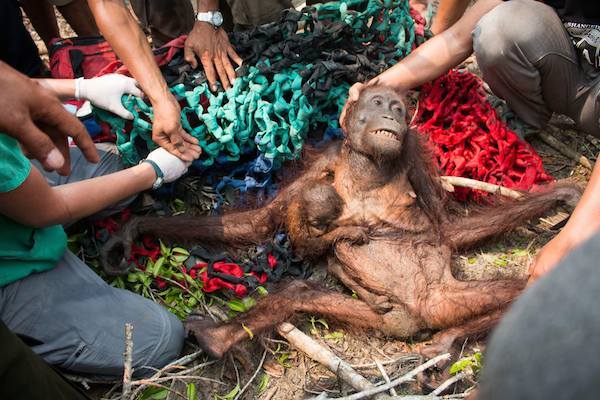 In the midst of the global environmental crisis already considered by experts as “the worst man-made ecological disaster of the century” there are wildlife rescue teams desperately trying to save the lives of the few remaining orangutans in the wild.

International Animal Rescue (IAR) teams are facing shocking, heartbreaking scenes such as the one in the photo below, helping to save a mother and baby.

“This photograph shows our rescue team desperately trying to save the life of a mother orangutan and her tiny baby,” IAR writes on Facebook. “They were forced out of their forest home as a result of the fires and ended up in a village. The villagers were frightened and threw things at the terrified mother before attempting to capture and tie her up.” 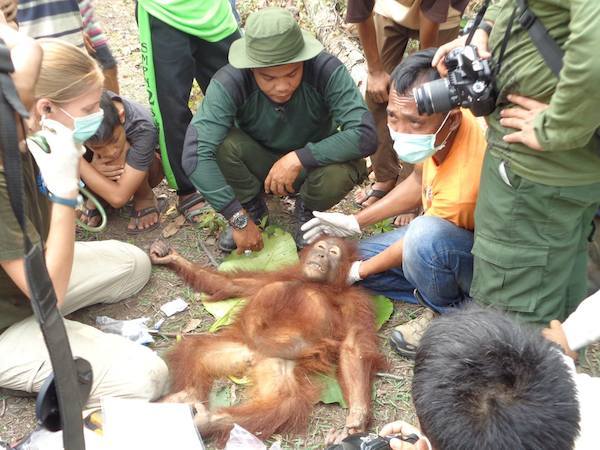 “Fortunately our team got to her just in time. They quickly anaesthetised the mother with her frightened baby clinging on tightly,” they write. “They have now been translocated and released into a safe area of protected rainforest and are being monitored by a conservation team to ensure that they are recovering well from their terrible ordeal.”

The mother and baby are not the first to be rescued and they will not be the last. The group says that it is just one of the many horrific scenes that their team is having to respond to as the fires continue to destroy the rainforest.

But the group is short of manpower and resources and is making an urgent plea for donations to fund more portable fire fighting equipment, more veterinary staff, more rescue, more medical equipment and treatment for orangutans arriving at their medical centre.

Since then IAR’s teams in Ketapang have risked their lives to rescue 14 orangutans, some directly from fires or from the smouldering forests. 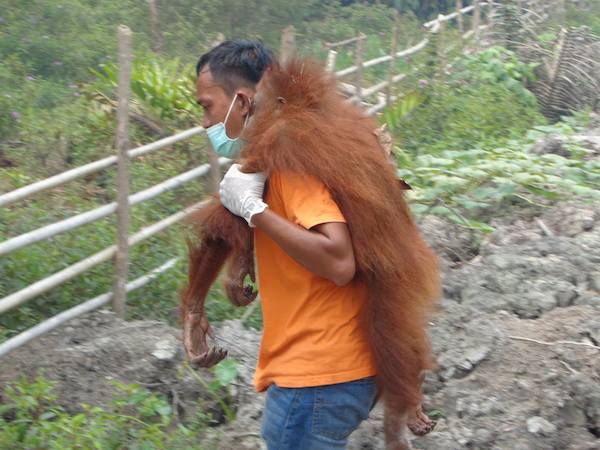 “We don’t know how many orangutans we have lost in this crisis but we know that this is going to be devastating for orangutan populations in the wild and could mean that orangutans will soon be closer to extinction,” says Karmele Llano Sanchez, Program Director for IAR Indonesia, in a release.

She adds, “I fear that in terms of the orangutans, the worst is yet to come. And if serious action isn’t taken soon to stop the fires, it will simply be too late.”