Three cows that went through a harrowing ordeal in the aftermath of a powerful earthquake which hit New Zealand are safe thanks to a dramatic rescue.

The cows ended up on a small patch of ground surrounded by a hollow pit created by a landslide after a 7.8 magnitude quake hit the island on Monday, November 14, 2016.

An aerial photograph of the cows shows just how dramatic a situation they were in. 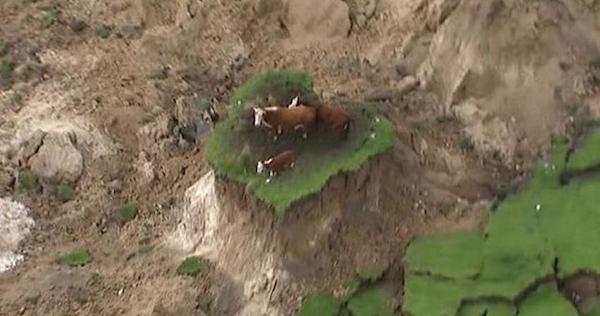 Newshub filmed the stuck cows near the township of Kaikoura after the quake triggered landslides around them.

A day after the cows’ predicament caught attention of people around the world, the Newshub news service reported Tuesday that the two cows and a calf were rescued after the farmer and some helpers dug a track to them and brought them out.

The farmer said the cows were desperate for water after they were rescued. He said the quake fault line ran right beneath his farm. The farmland was relatively flat before the earthquake.

The man says his cows are lucky to be alive given the circumstances.