Kolima is a Kangal, an Anatolian Shepherd and “the most impressive dog that I have ever seen” says Felice Caputo, Kolima’s owner. Kolima became a member of his family around a month ago. Unfortunately, the puppy has a disease called Wobbler Syndrome.

It’s a congenital neurological disease that causes the vertebrae in the neck and spine to compress the nerves, which causes instability of the spine and affects the joints and ligaments. Basically, it means a dog has difficulty standing and walking. 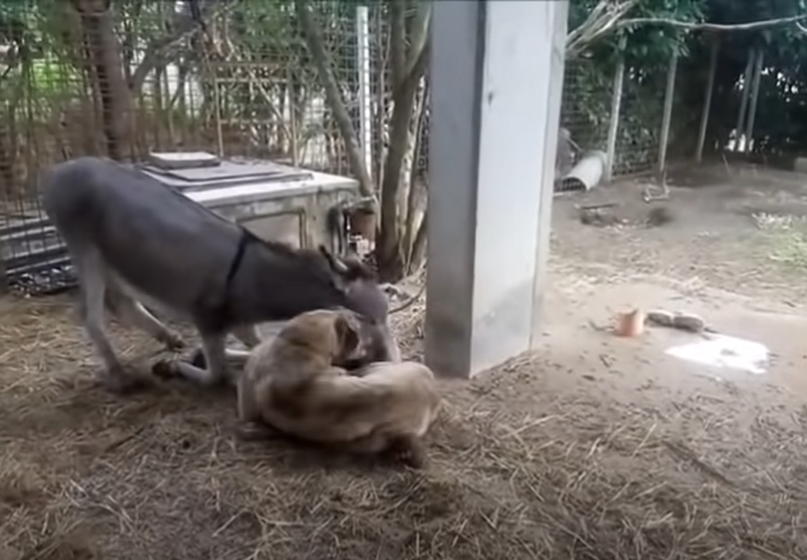 “In practice, Kolima stands up with difficulty, walking in shaky, he has trouble getting up from the ground and spends most of the day squatting,” says Felice.

All this could make a puppy restless and lonely, if not for an unlikely friend who is making Kolima feel better.

Enter Paul, a mischievous and stubborn donkey who Felice has had since he was a foal. At first, Paul was indifferent to the dog in his barn. But when he realized Kolima had limited mobility he took the dog under his wing.

Kolima has brought out Paul’s nurturing nature because the donkey kneels down to let Kolima get close to him and nibbles him playfully. He lies next to Kolima and puts down his hay for the dog. In fact, it’s become clear to Felice that Paul has adopted Kolima.