In February 2016, a 4-year-old pit bull was found wandering in the San Jacinto desert in California. She was starving, down to skin and bones — except for a swollen belly so large that rescuers thought she was pregnant.

X-rays later revealed that the emaciated dog’s stomach was so large because it was full of rocks that she had been eating, likely because she was so hungry. But for Rocky, as she was named by rescuers, things were finally looking up. Rocky got lifesaving surgery to remove the rocks from her stomach. But even though she was healing, she still needed a proper home. For the next few months she lived in boarding and foster homes while people searched for a rescue that could take her in. Finally, Luvable Dog Rescue in Eugene, Oregon, heard her story and agreed to take Rocky into its 55-acre wooded shelter and sanctuary as soon as a space opened up for her.

In July 2016, a spot opened at Luvable’s shelter at last. They transported Rocky from California to Oregon with the help of the Shelter Transport Animal Rescue Team (START), which transports animals from California shelters to Pacific Northwest rescue organizations for free.

Once Rocky arrived at Luvable, she quickly became a favorite with everyone. “Rocky was wonderful with all of our staff and volunteers from the moment she arrived at Luvable,” Liesl Wilhardt, founder and executive director of Luvable, told The Dodo. “She loved to play games and play with toys, and go for hikes and runs, but she also loved to cuddle. She put on weight and muscle and became a fit and athletic dog.” 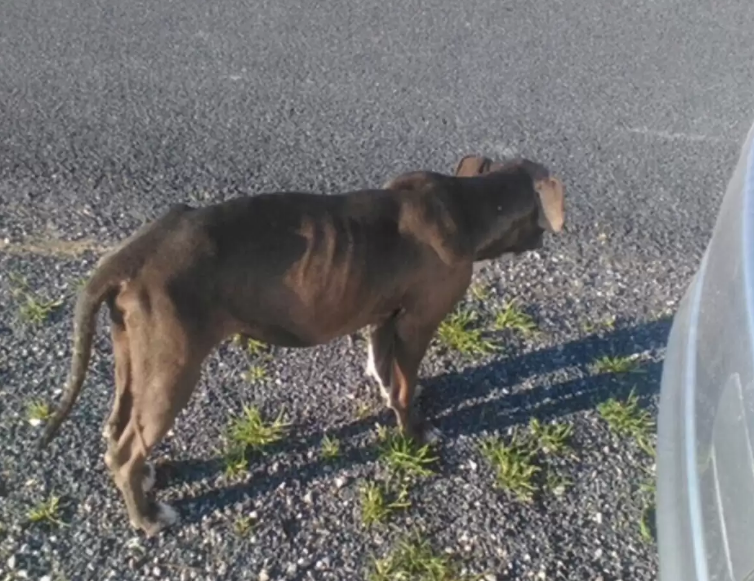 Rocky’s personality only flourished as she spent more time at Luvable’s sanctuary. “She made a lot of funny noises, gurgling and snorting and grunting, especially when she was happy,” Wilhardt said. “She always made us laugh. She was a very happy dog, downright joyful, and we swear she knew she was saved and was very, very grateful.”

Though she was well-loved by all of the humans, months passed and Rocky still hadn’t found her perfect forever home due to her trouble acclimating around other dogs.

“Rocky was great with other dogs in her foster home in California, but she could be a bit bossy and reactive with dogs she met at Luvable,” Wilhardt said. “Poor Rocky seemed to just get so excited and overstimulated that she couldn’t control her manners, which put off some other dogs and made people anxious to be responsible for her. So, even though she was a great dog 99 percent of the time and people liked her when they met her, nobody was willing to give her a home.” 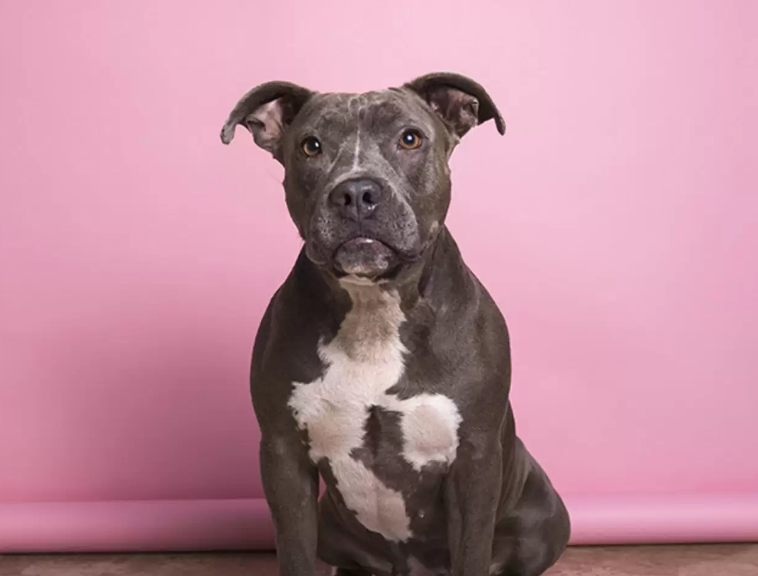 It wasn’t until more than a year later in August 2017 that Rocky’s perfect home finally arrived. Rich and Diane Carey had adopted their 6-year-old French bulldog-pit bull mix Hank from Luvable back in 2016 and thought Rocky might be a good fit for their family, especially since Hank was missing the family’s recently deceased dog Dutch.

Like Rocky, Hank (formerly known as Champy) had come to Luvable from a California shelter in terrible condition, with mange so advanced that he was missing entire patches of fur.

“I had kinda kept in touch with Luvable, occasionally sending pics of Hank, and they mentioned that Hank needed a sister,” Diane Carey told The Dodo. “I asked about a few of their dogs and each time I asked I was told they were in a sleepover, but Rocky had never had a sleepover and [had] been there almost a year.” 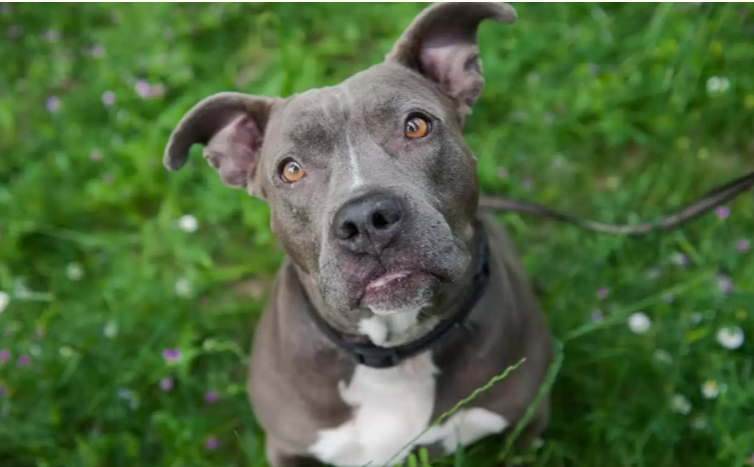 Luvable employees Ashley Olson, manager and director of adoptions, and Danielle Day, pit bull adoption counselor and trainer, took Rocky to meet Hank and the Careys at their home. “Ashley and Danielle worked with Hank and Rocky for about two hours,” Carey said. “Both of the dogs are pretty aggressive when they play and I was really nervous because I liked Rocky right away and was afraid they would say it wasn’t a match, but they thought it would work.”

The two dogs continued to play for the next few hours, occasionally getting into spats where they had to be stopped, but things seemed to be going well. “Rocky was such a sweetie right away and so loving to us, lots of kisses and really loved our attention and Hank didn’t seem to mind us loving on her,” Carey said.

Unfortunately, Rocky and Hank got into a pretty bad fight later that evening that frightened the Careys to the point of having to take Rocky back. But they couldn’t stop thinking about her. After several days, they contacted Luvable again to see if they could give it a second shot.

It was then that Wilhardt came up with a solution that turned everything around. “I got the idea to have Luvable pay a dog trainer to take BOTH dogs to his house for a 24/7 intensive board and train program,” Wilhardt said. “My hope was that if we hired an experienced dog handler to work with the two dogs in a safe and controlled environment together, he could address the problems as they arose and help the dogs learn to trust one another, live in peace and even enjoy each other. And it worked!” 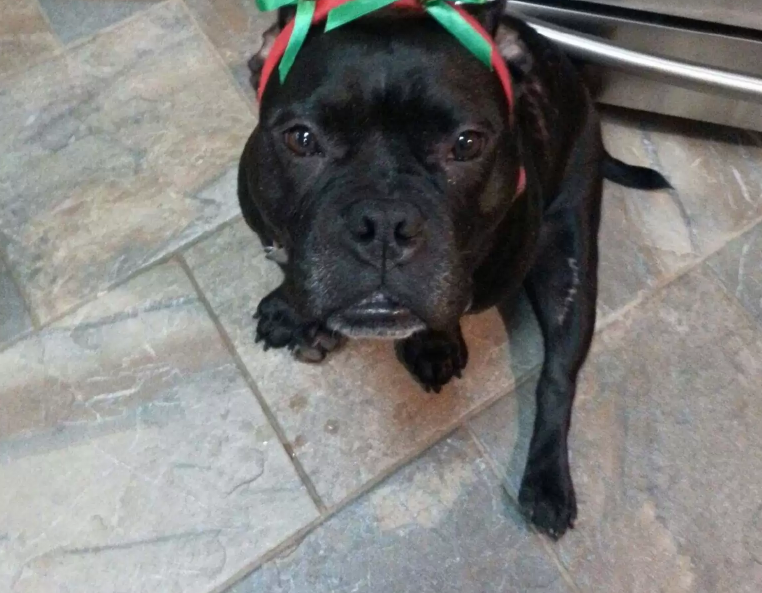 Rocky, now known as Roxi, and Hank only needed to be at the trainer’s home for four days before they were ready to go back to the Careys. The trainer taught the Careys techniques to help the dogs continue to get along and avoid conflicts. “Sometimes owners mean well but they are just not up to the challenge of dealing with dogs who are acting out or behaving in an aggressive or dominant way,” Wilhardt said.

Since then, Roxi and Hank have become the best of friends and are practically inseparable. “We are so happy with Roxi,” Carey said. “She and Hank get along great and have a blast playing. We bought a van for them and they love to go for a ride, especially Roxi.”

Roxi also loves spending time in the Careys’ huge yard, playing tug-of-war with Hank and chasing sprinklers. “We have automatic sprinklers and Roxi loves when the water comes on,” Carey said. “She puts her whole mouth over the sprinkler and pops the top plastic part off of it.”

“It was a bit of a journey to get Roxi here, but thanks to the great people at Luvable we did,” Carey said. “She is a very special girl and we love her very much!”