There were nearly 2,000 dogs on the property in Harbin, China — and Harriet stood out for the saddest reason.

As the other dogs ran around or played, she sat frozen in the corner like a statue. Her fur was filthy and she looked so worried. 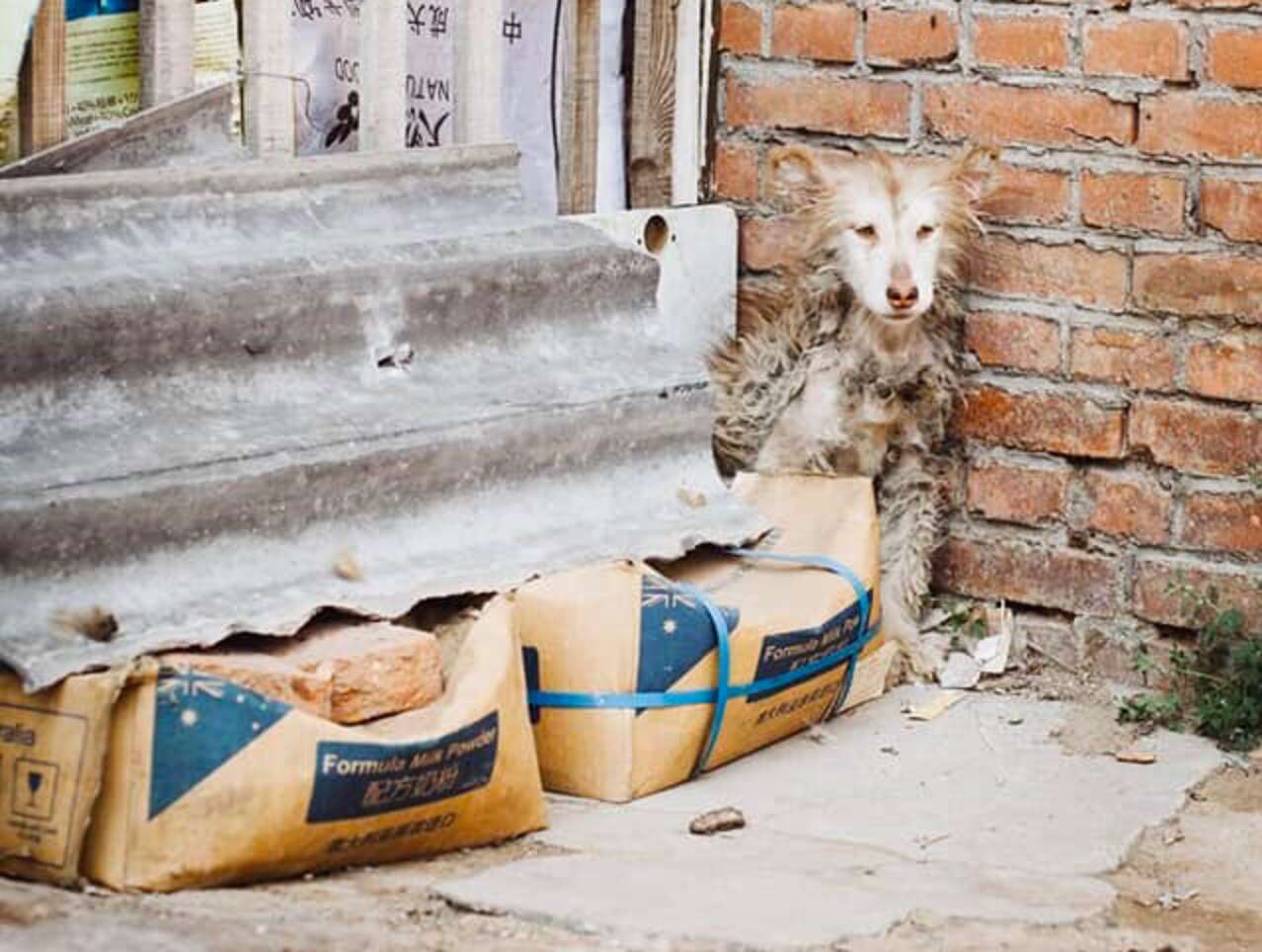 The dogs there all came from similar places; they were either found as strays, or rescued from trucks on the way to slaughterhouses. The woman who owns the compound saves the dogs and keeps them safe, and regularly allows Harbin Slaughterhouse Survivors Animal Rescue (Harbin SHS), a rescue group, to take in dogs in need of the most help.

Rescuers knew right away that dog was Harriet. 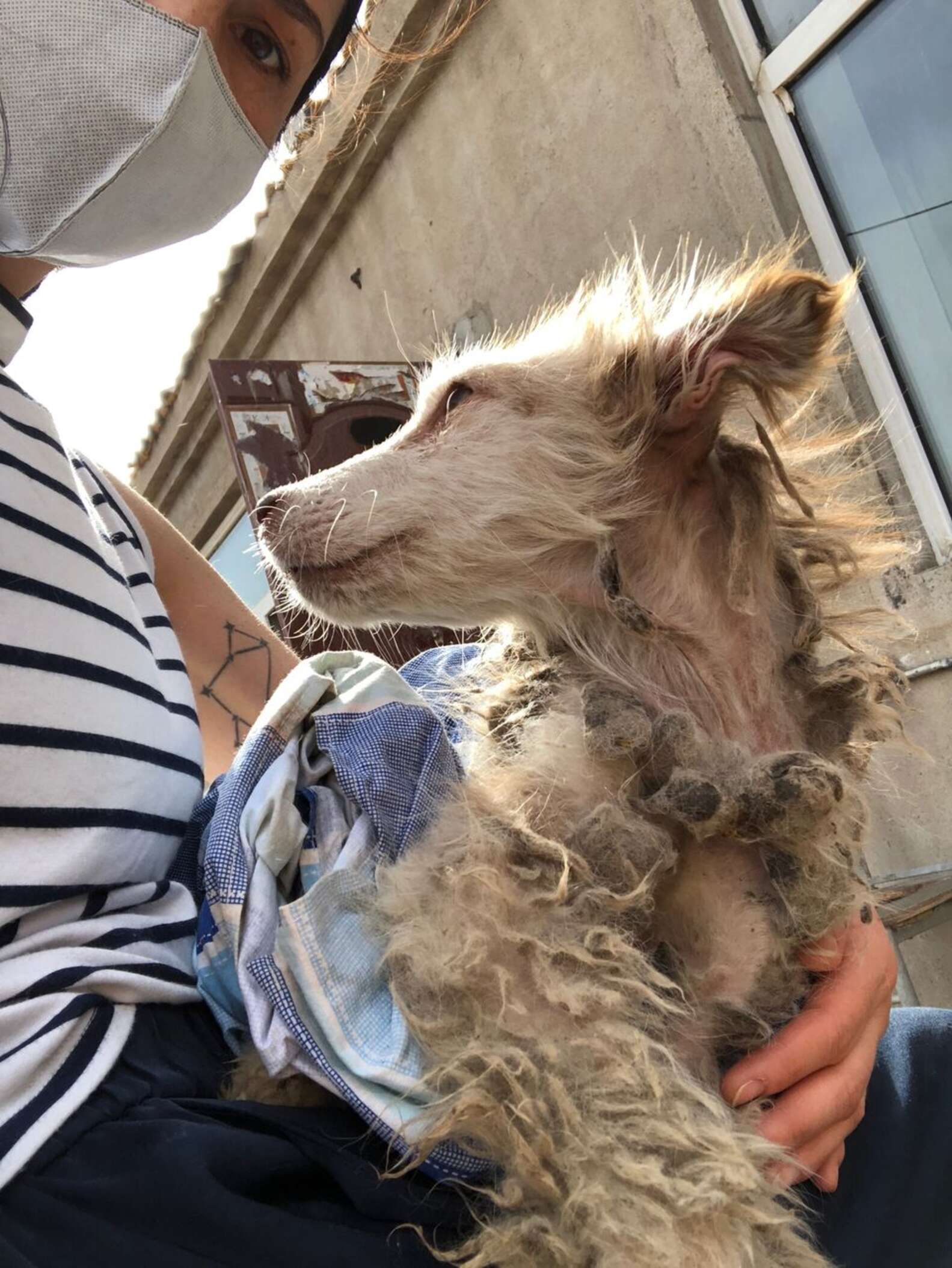 “We were visiting the property in May, and in the far back corner, I see this tiny little husky looking completely scared,” Rachel Hinman, a U.S. volunteer for Harbin SHS, told The Dodo. “I tried reaching out, and she just sat there. We had no idea where she came from, but she was not doing well.”

When Hinman and the other rescuers picked Harriet up, they could fully see the extent of the neglect she’d been through. Her fur was thick and matted with feces, disguising a horribly thin and bony frame. She was so small that they thought she might be a miniature husky.

Finally knowing she was safe, Harriet settled right into the team’s arms and barely made a peep on the ride to the vet clinic. This is a trip all too familiar for the women who founded and work for the rescue full-time: Hayley Hayes-Fitzgerald, Aimee Clarke and Emily Parker, all expats who live in Harbin and work as teachers during the day. 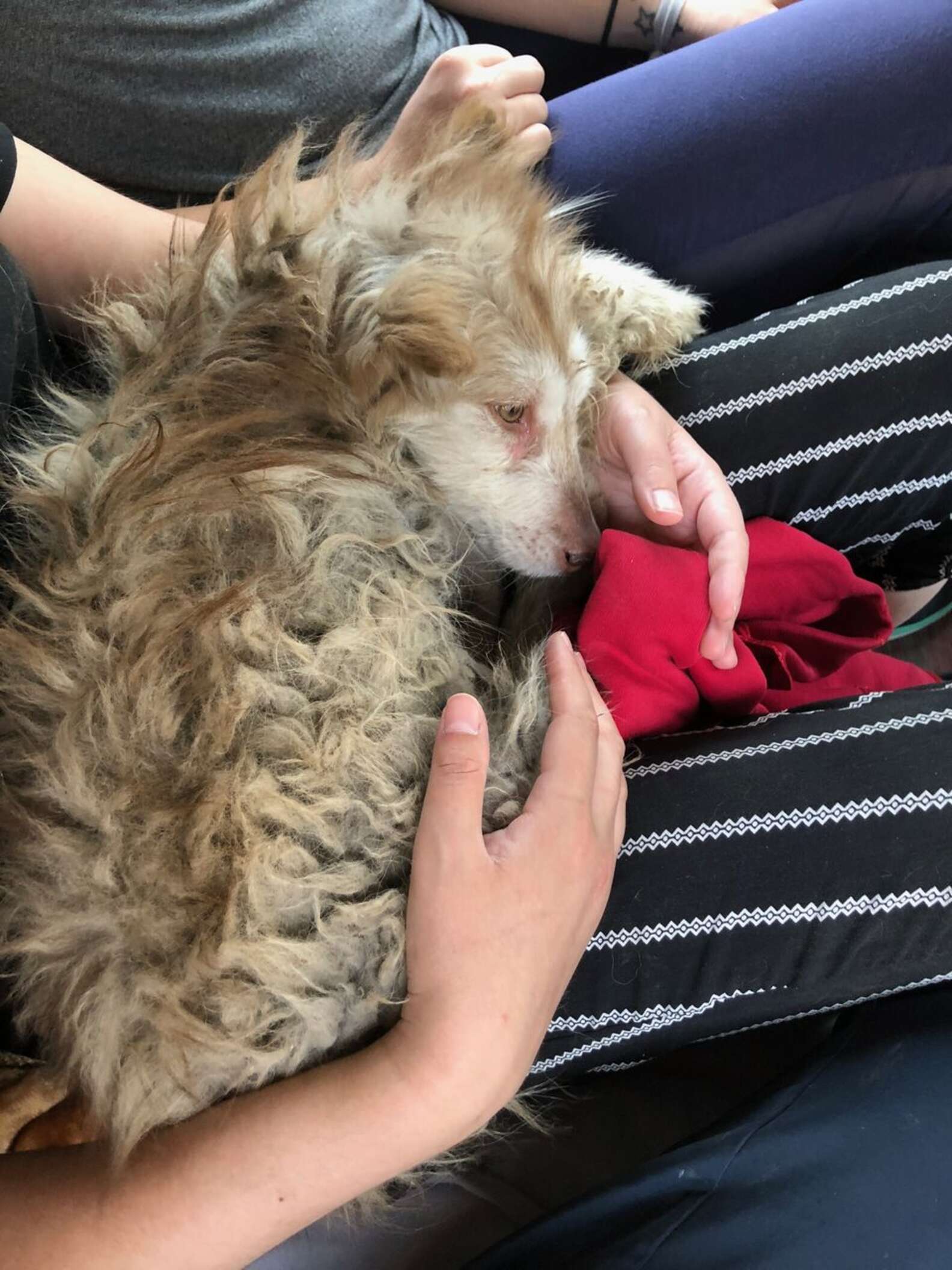 “We thought she was a young puppy for sure, due to her size,” Hinman said. “But the vet checked her teeth and estimated she was probably 8 months old. She just must’ve been so malnourished that it affected her growth.”

Luckily, Harriet wasn’t suffering from any major medical problems aside from her malnutrition and matted fur. The team carefully shaved off her tangled fur, gave her a bath and got her settled into the rescue center, where she would stay for about two months to heal and gain strength.

“She was so quiet and docile,” Hinman said. “It took us a long time to shave off all her fur, but she sat there so patiently and never barked or growled. That really touched me. She had been through so much, and like many other dogs Harbin SHS rescues, was naturally sweet, playful and kind.”

As the weeks went on, Harriet kept getting healthier. With special attention and love, she was no longer so afraid — and she was finally ready for the trip of her life.

Rosee Vallee, a woman from Canada, saw Harriet’s picture online and knew she had to adopt her. At the end of July, Harriet flew with a volunteer into San Francisco, where she met her new mom for the first time. 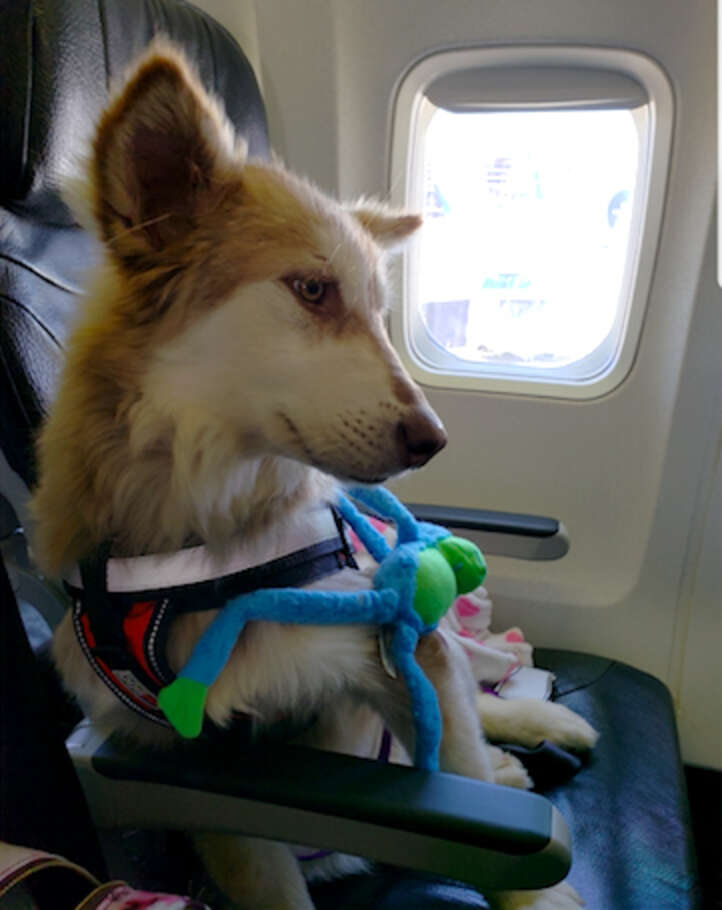 “I knew she was for me the second I saw her; she looked so sad and all I wanted to do was make her happy right away,” Vallee told The Dodo. “Since I have had her, we have went on road trips, we have flown together, she went to Lake Louise in Canada… She is my princess. She loves everyone she meets.”

At home in Canada, Harriet, now renamed Bailey by her family, has three dog sisters, one of whom is another rescue pup from Harbin SHS named Anezka.

In a matter of months, Harriet has gone from matted stray to loving family member — all because of the kindest people. 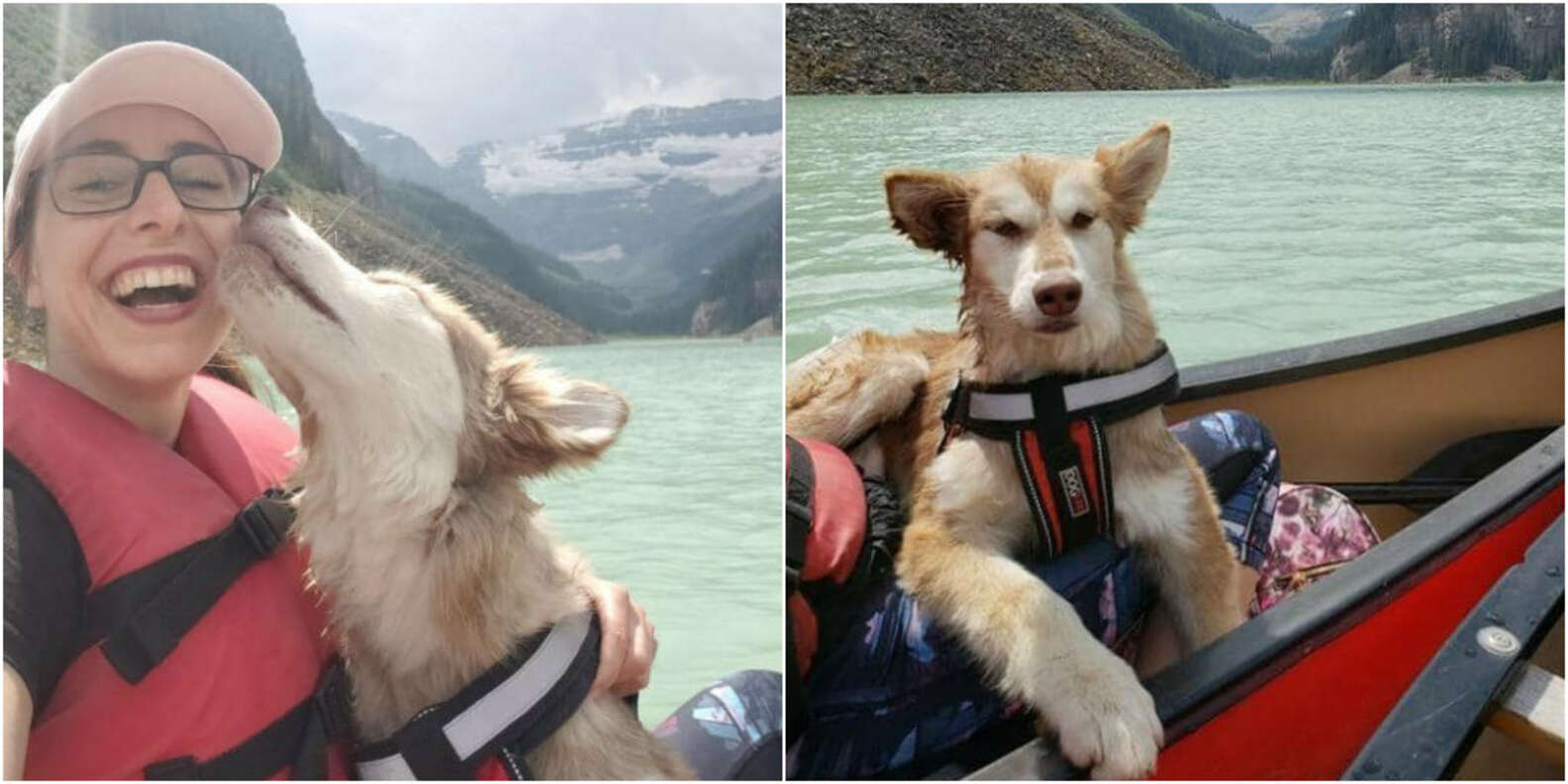 “I see her now and it just warms my heart,” Hinman said. “I think of all the people who came together to help her — they are the real heroes of this story. Every dog deserves a second chance, and Harriet is such a perfect example of that.”