Here’s a shower thought: if you have a doggy door, it means you’re playing “pet roulette”—you never know whose pet will enter your home. Makes life a bit more exciting without making it too dangerous.
Jessica (Imgur user bimbumbim) woke up to the sound of the doggy door opening and closing. All of her dogs were with her in bed. Whatever (or whoever, yikes!) entered through the doggy door was certainly a surprise, especially given that it was nighttime. 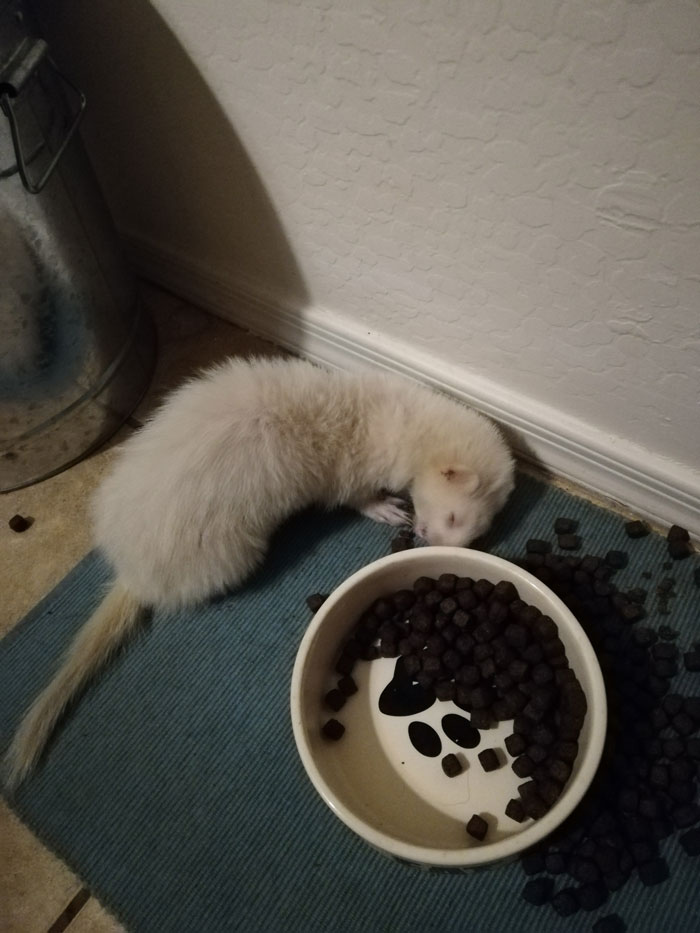 Bored Panda reached out to Jessica, who elaborated on her story posted on Imgur.

“I live alone, so I have cameras outside, but nothing was even caught because this little guy was so little and probably slinked so close to the house,” said Jessica. “I really just woke up to the sound of my doggie door and half asleep assumed as usual it was one of my three dogs.”

Having realized that all of her dogs were close enough for her to feel them on the bed, another thought occurred:
“I got paranoid that it was a human intruder… which makes no sense, I know, but I froze in fear for about a minute while my dogs jumped off the bed to investigate. I never heard barking—just a lot of sniffing and running around.”
“After a moment, I turned on the light and went out to investigate. That’s when I saw the ferret at my dog’s food bowl.” Neither her, nor the dogs knew what to make of it. “Having a doggie door is always a little bit nerve-wracking because something could come in, but nothing like this had ever happened before.” 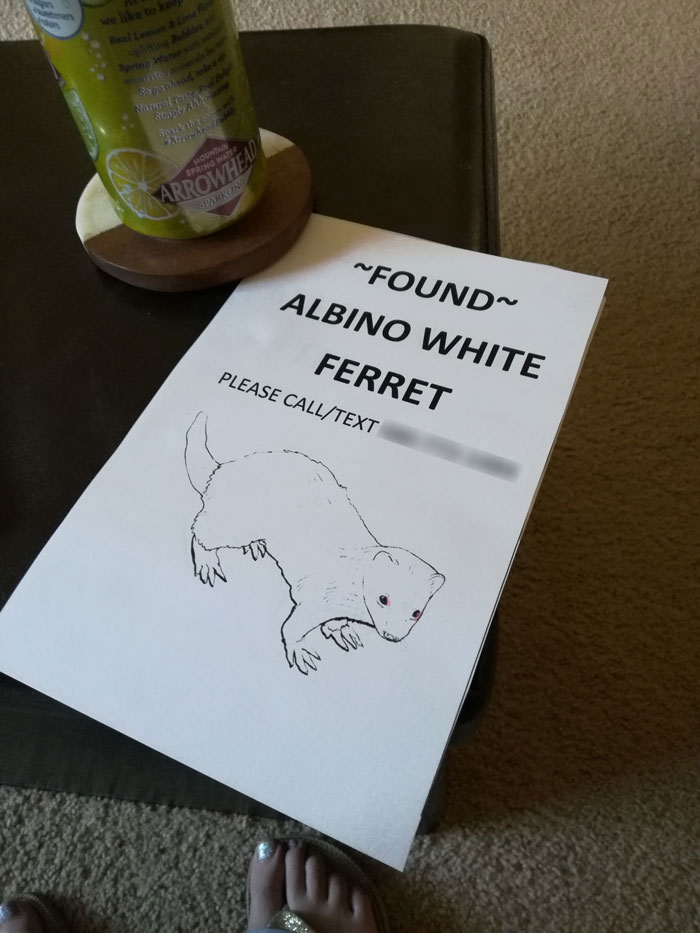 The small critter was allowed to have his feast and to stay for a while until the Imgurer decided what to do. He soon ran into the bedroom and made a nook under the bed.

“I cannot keep this little guy. I’d love to, but I have 3 small dogs already and one of them is having a lot of difficulty not trying to eat him,” explained Jessica. “I’m not kidding he ever so slyly will try to bite it’s head. However, I watch very closely when I let the ferret out to roam.”

If you recognize this ferret or know who owns one, let us know or contact Jessica (bimbumbim) directly via Imgur.
Ferrets are naturally curious beings and enjoy scavenging for food. So, it should come as no surprise that this one went on an adventure straight into someone else’s house.

News of the found ferret was soon up on the neighborhood board and flyers were distributed: “I put flyers all over my neighborhood and posted a notice on the internet neighborhood board, but no one has come forward yet. I’ve only gotten responses of people wanting to adopt him from Imgur so far.” 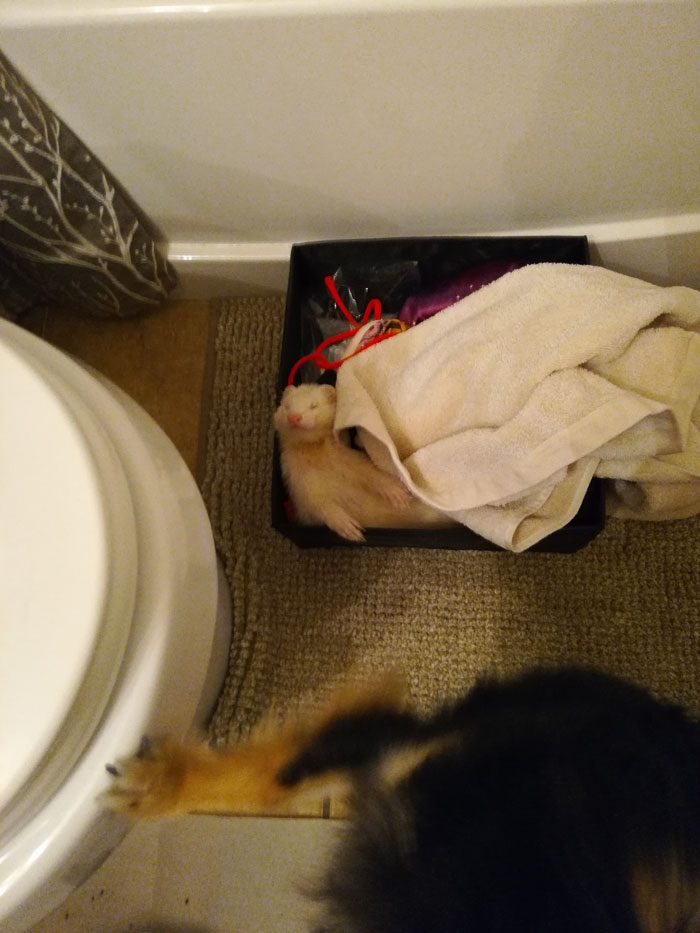 The ferret has since then switched places of slumber around the house and got comfortable with his surroundings. He even agreed to be bathed and held.

“It’s been a couple days now and my dogs are doing better. They understand they aren’t allowed to attack him,” said Jessica. “I think the ferret is older because he does not care at all about my dogs. He doesn’t make a peep, but just stares at them when they get in his face.”

The little guy roams around the house under close supervision. Even though he was given ferret food, he seems to gravitate towards the feed trays belonging to the owner’s three dogs. “I am reading that it’s not OK for him to eat it and so, in the bathroom, I’ve made his home and only put out kitten food.”

Ferrets spend most of their days eating, digesting, and sleeping. They sleep up to 20 hours a day, but adapt their sleep times to match those of the owner since they also enjoy playing and goofing around. 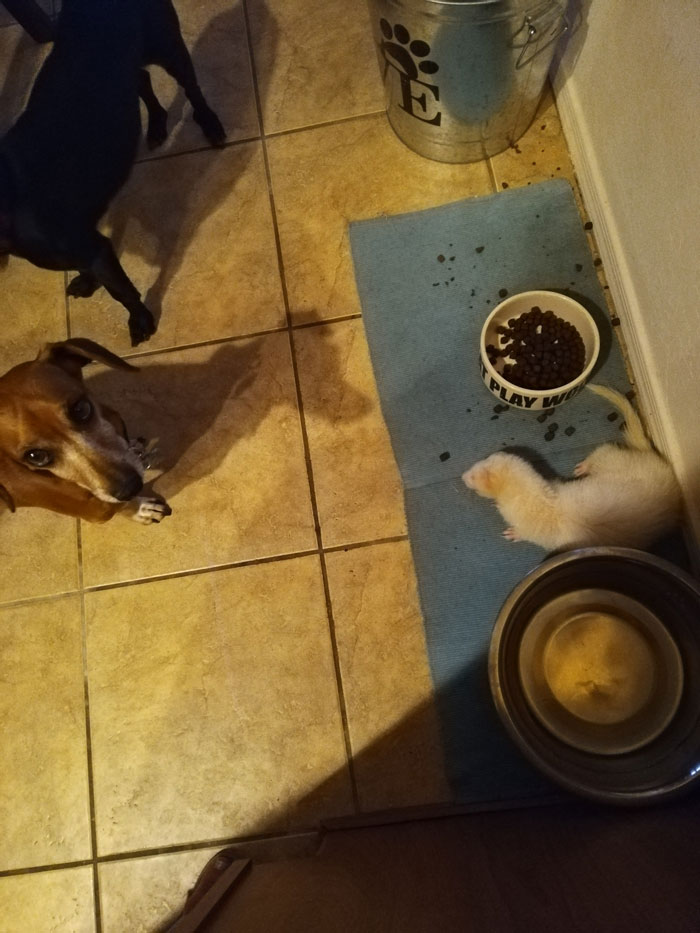 The Imgur user turned to the internet for extra help and received a lot of helpful information and support from the community. Unfortunately, she won’t be able to keep it because of her protective dogs and her upcoming move to Boston. If the owner does not show up, she will try to find another good home for the little dude.

Jessica lives south of Phoenix, so if you happen to live in the area and recognize this ferret (or know who owns and has recently lost one), let us know or contact her directly via Imgur.