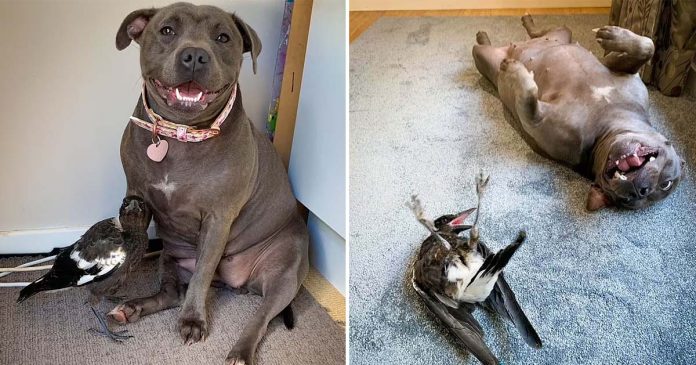 An abandoned bird in Coomera, Queensland, astonished everyone when it began barking like a dog shortly after being rescued and adopted by a canine it thinks to be its mother.

Molly the magpie was on the verge of death when her parents abandoned her to her destiny in September of last year for whatever reason. Juliette Wells and her partner, Reece, were fortunate enough to come upon the abandoned magpie while walking their dog Peggy.

The young magpie was extremely frail when they found her, and her parents were nowhere to be seen, so the couple decided to take her in and help her.

According to Juliette, who spoke to the Daily Mail,

“We noticed her parents at the top of the tree, but they refused to approach her. It would have fallen out of the nest and been left behind, which may happen from time to time. We waited two hours for them to come down, but they never did.

They didn’t know what to do with the small bird at the moment, so they called a wildlife expert, who advised them on how to care for it.

Molly appeared to be weary and slept for the first 24 hours, but her adoptive family believed she would not be able to recover from her health issues. They started feeding her and gave her water using a dropper, all while Peggy kept an eye on her.

Molly healed after a week, owing to her adoptive parents’ care and Peggy’s unconditional love.

Peggy apparently needed a kid to look after and found the right fit in Molly, with whom she soon developed a strong relationship. Peggy devotes her entire attention to her lovely kid, who appears to believe that the dog is her mother and imitates her in every way.

It’s unbelievable that this could happen, but they clearly have a strong relationship. From the minute they wake up until they go to sleep, they are together.

Molly has developed certain canine characteristics as a result of being cared for by a dog, and has even begun barking like her mother.

“In April of this year, we began to hear Molly barking.”

The family initially assumed Peggy was the one barking, but one day they noticed Molly doing it without issue.

“We burst out laughing because it sounded exactly like Peggy.” We couldn’t believe what we were hearing.

It has been heard to do it many times a day since then, sometimes more than others depending on the scenario.

When he hears other dogs barking or hears a disturbance in the woods, he immediately assumes it is a dog. Molly also feels that barking is the proper method to warn of danger since she observes her mother and mimics her actions.

Peggy was taken aback when she first heard Molly bark, but she soon became accustomed to it and now considers it usual.

It should be emphasized that Peggy was terrified of birds before meeting her adoptive daughter, but for some reason, she decided to care for Molly.

Molly has grown accustomed to Peggy and does not want to leave her side after spending so many days with her. Even when she had fully healed, the couple attempted unsuccessfully to persuade Molly to return to the wild.

Molly is enamored with her adoptive mother, but she isn’t far behind, and she has already begun producing breast milk without being pregnant. Molly pinches her nipples on sometimes, as if it were her dog; it’s a wonderful mother-daughter bond.

It’s unlike anything I’ve ever seen. The creatures are incredible.

It is unknown whether the magpie will ever leave his house, but for the time being, this lovely connection will provide his family much delight.