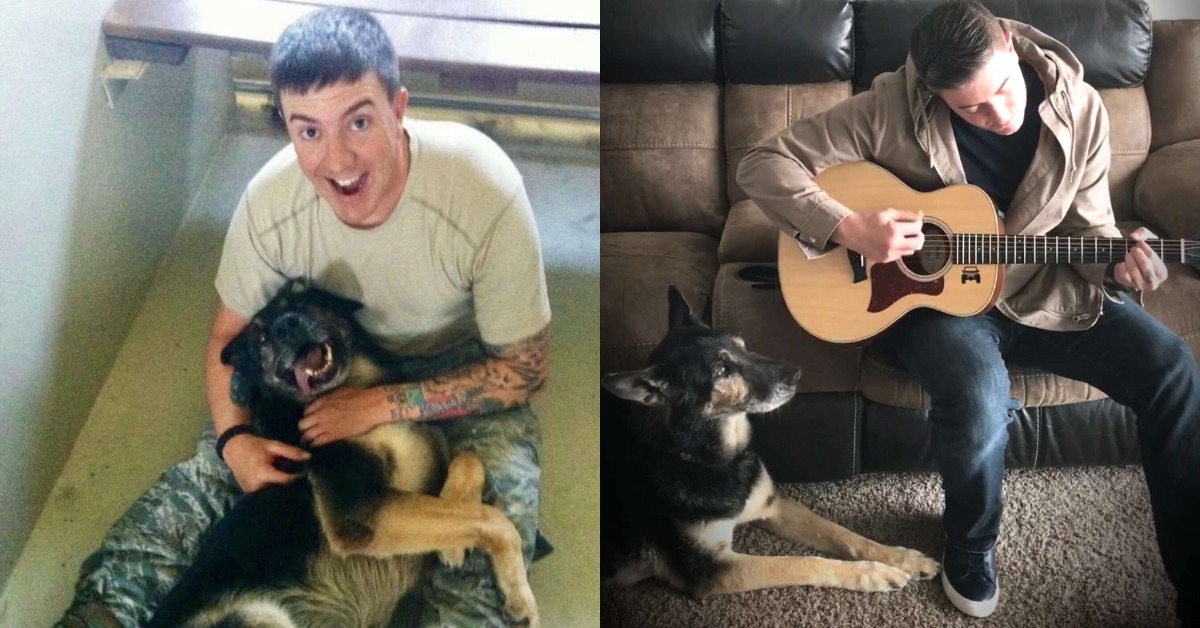 Kyle Smith and his canine companion Bodza have been through a lot. They’d both spent 189 frigid and miserable days in Kyrgyzstan as members of the US Air Force on a security assignment.

Smith couldn’t fathom being anywhere else except by Bodza’s side on his deathbed, an 11-year-old German shepherd.

Bodza had been an explosive detection canine for the US Air Force since 2006, and he’d saved lives by sniffing out explosives in missions in Iraq, Kyrgyzstan, and Kuwait. Despite the fact that Smith didn’t start working with Bodza until 2012, the two quickly became friends.

“I liked working with him because he taught me a lot,” Smith told The Dodo. “As a new handler, he showed me patience and how to comprehend that this profession isn’t just about you.”

Smith and Bodza, on the other hand, didn’t have to work all day; they also had plenty of time to play.

Smith described Bodza as “a funny and loving dog.” “We had horse stables right next to our obedience yard, and no obedience was going to be done when [the horses] were out. He’d never stop running the fence line.”

“He liked to bark at his own shadow, so I’d constantly play with him that way,” Smith explained, “making my hand a shadow on the ground and moving it.” “I suppose he mistook it for a rabbit.”

When Bodza’s time came to retire, Smith had no hesitation in adopting him. He responded, “I brought him home the same day.”

“At home, he was much more faithful,” Smith added. “He was always following me around. Every night, he would rest his head flush against the bed and say good night.”

Then, in the summer of 2016, Bodza was diagnosed with degenerative myelopathy, a condition that affects a dog’s spinal cord and is progressive and incurable.

“His hind limbs had lost their function, and he could barely stand, let alone walk,” Smith explained. “The tension on his body was too much for him to manage, and using the toilet was a chore.”

Knowing how difficult Bodza’s life had become, Smith took the difficult decision that no dog lover wants to make: putting Bodza down.

Last Monday, Smith and nine of his employees drove Bodza to the Fort Bliss Veterinary Clinic in El Paso, Texas. They spread a blanket on the floor and made Bodza feel as relaxed as possible.

Smith recalled, “I was holding Bodza when he passed.” “It was a whirlwind of activity. It was all a bit much.”

Despite Smith’s grief, Bodza appeared to be in good spirits in his final minutes. “When he was put to sleep, he had a smile on his face,” Smith added.

Smith was overcome with emotion when Bodza died. Fortunately, he had the backing of his coworkers.

Smith recalled, “They let me cry like a baby.” “They patted me on the back and assured me that everything would be OK. My employer quickly grabbed a flag and placed it over himself, allowing me to enjoy a farewell moment.”

Smith described the experience as “amazing.” “At the same time, grief and serenity washed over me.”

Smith had Bodza cremated and maintains his ashes, as well as photographs of his closest buddy, at home. He also maintains Bodza’s collar on his car’s rear view mirror.