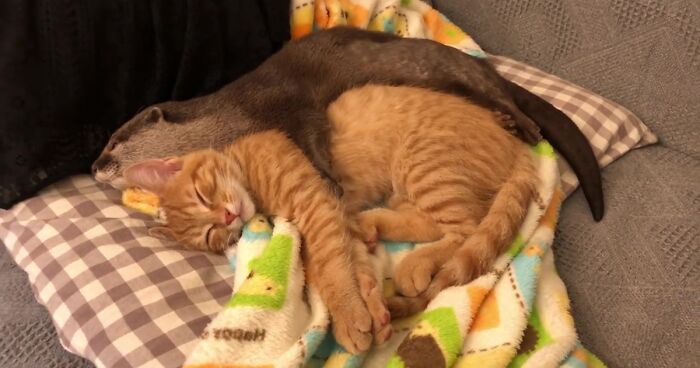 Animals can surprise us by forging unexpected friendships. We’ve previously told you about a rescue vixen and her closest buddy, a bulldog, a dog that welcomed a stray pregnant cat to give birth inside his doghouse, a wonderful connection between a duck and a pupper, and so much more. Let’s add one more odd friendship to the list today. Sakura, the lovely otter you can see in the photos below, lives in Japan with her owners and a cat named Mochi.

Sakura has her own Instagram account, which has over 47k followers, where her owners upload lovely photographs of the cuteness, which occasionally include her kitty best buddy Mochi.

Meet Sakura and Mochi, two online stars who lives in Japan with their owners.

As well as having a successful YouTube channel with 563k followers, Sakura and Mochi’s (adorable) everyday lives are documented in a wide range of films posted by the otter’s owners. One of the channel’s most famous videos, which just went viral on the internet, shows the otter and the cat snuggling up before they go to sleep.

The couple may be seen snuggling in one of the most famous YouTube videos.

In one of the most popular YouTube videos, the couple can be seen cuddling.

People appear to be very charmed by these snuggle partners and their lovely friendship; the video has had over 8 million views since it was published.

The cute video has received over 8 million views and over 11,000 comments.