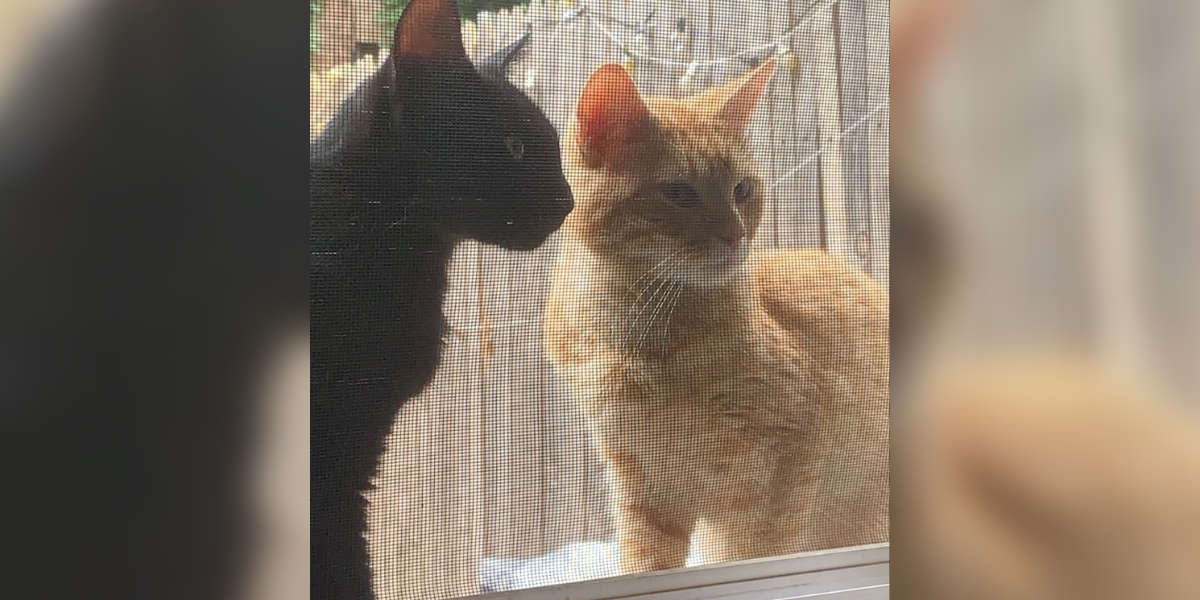 Gianna Llewellyn and her boyfriend Rob were startled when their new neighbors came over to say hello when they moved into a first-floor flat last summer.

A tiny orange tabby and a black cat approached the window as they were arranging equipment. The cats appeared to be hungry, so Rob put out some leftover salmon, which the appreciative strays enjoyed right away.

“After that, they kept coming back every single night,” Llewellyn told The Dodo. “Waiting at the door, meowing, and resting on the windowsill.”

The cats, which they called Miso and Suki, only came to the window when they were seeking for food for the first several days, but Llewellyn and Rob gradually earned their confidence. The cat pair soon spent all of their time at the flat, lazing in the yard by day and cuddling on the windowsill by night.

Llewellyn observed something unusual about the black cat as the weather grew colder. “When we first met them, they were both quite small,” Llewellyn added. “Suki was quite thin, but her stomach appeared to be a little large for her. So we thought to ourselves, ‘She’s either pregnant or something worse.’

Llewellyn went to the pet store and bought two cardboard carrying bags, which she crammed the cats into so she could take them to the vet. Miso punched a hole in his box to see Suki again, since the cat pair despised being separated.

Llewellyn explained, “They continued mewing to each other from the cardboard boxes, making sure the other was OK.”

Suki was pregnant, but otherwise healthy, according to the vet, so Llewellyn sought help from the local organization Little Wanderers NYC. Llewellyn and Rob took up the role of formal foster parents for the cats and brought them inside.

Suki was sitting on a towel with four newborn kittens at her side when the couple returned home one night.

When she started giving birth again, raising the total number of kids to seven, they believed they had missed the major event. Miso was there to console his girlfriend throughout it all.

“She still gets contraction pains, and Miso would go over to be close to her every time she yelped from one,” Llewellyn added. “They make the ideal couple.”

Miso relished the opportunity to play father, grooming and playing with the kittens. “At first, it appeared that all of the kittens were black, but as they grew older, we discovered that there was one black cat, three gray and black tabbies, and three torties,” Llewellyn said. “You can see a little orange in the tabbies and torties, so Miso is definitely the father.”

Llewellyn has now found the kittens loving homes with her friends, and she and her partner have opted to adopt Miso and Suki.

The cat pair will no longer have to worry about being separated.