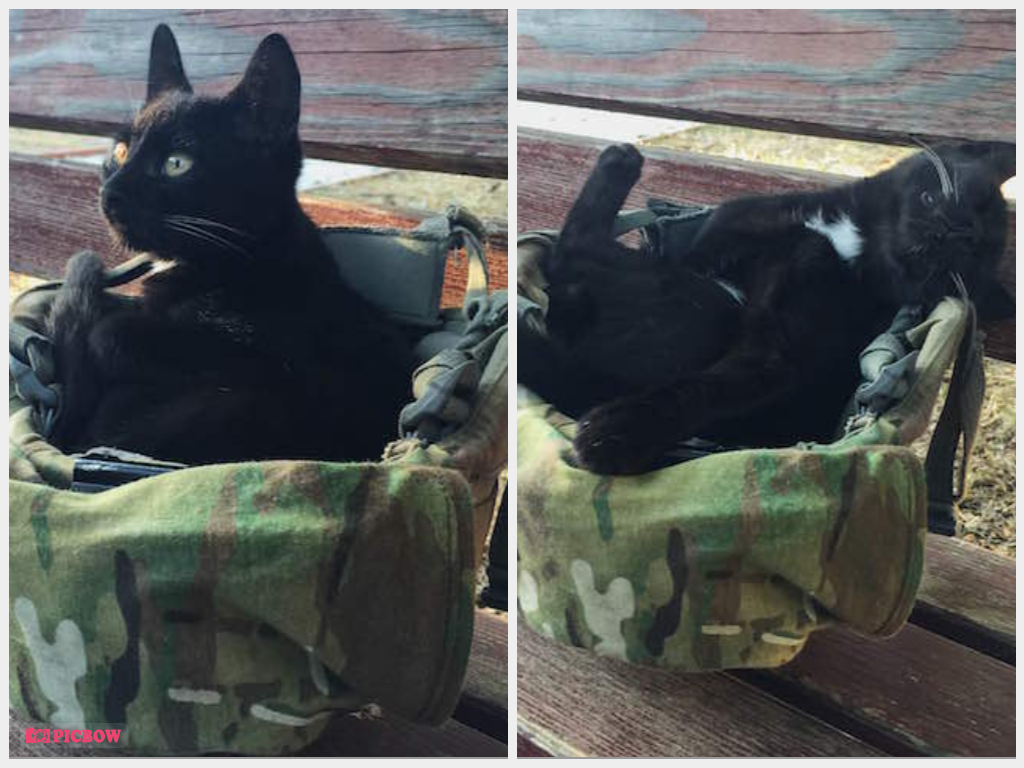 As a soldier in Romania, a tiny black kitten with white patches on his chest caught Justin’s attention.

In a semi-abandoned facility, “I picked up this kitten a few weeks ago and brought him to the barracks where we dwell.” he said.

The kitty was immediately bonded to his new favorite human. He enjoys sleeping in the soldier’s helmet, which is the closest thing he’s ever had to a bed.

“In our nation, there is a tremendous stray issue. They’re all over the place. Justin remarked in the tale, “This tiny kid just took a like to me.”

After a long day, he also enjoys curling up on his human’s lap. Salem provides a small taste of home for a soldier who has been apart from his roots for so long.

Justin isn’t the only soldier on base who likes having a new animal companion. He said on GoFundMe, “He isn’t your normal cat, he has a lot of personality and provides joy to all the troops that reside here.”

The website was created in order to gather funds for Salem to return to Justin and live with him and his wife.

“It’s a tough life–and winter is on the way. He said on the post that fleas and other violent stray animals are a threat to his health. “Any money left over from his meds and travel to the United States will go to animal rescue organizations.”

Salem’s GoFundMe page earned almost $4,000 in just a few days, according to Justin. This amount more than covers the expense of vaccinating the cat and transporting it across country boundaries.

Meanwhile, “Salem” has been happily residing in the local clinic with several other kittens. The remaining funds will be distributed to local groups following the flight.

“Oana is the woman who took Salem in and took care of everything. I owe everything to her. Not only that, but every week she finds kittens and abused or abandoned cats. He continued, “She even brought a group in the same day we took Salem to her.”

We’re overjoyed to witness this joyful conclusion! Thank you for your service to our nation and for assisting Romanian stray cats, especially one very lucky black kitten!