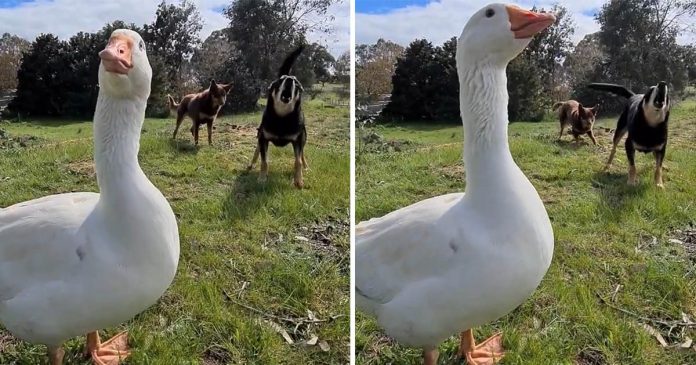 New South Wales, Australia, is home to an unique goose named Tony. After being abandoned as an egg, it was hatched by a hen who found it. Interestingly, the inquisitive goose believes that it is a dog and seems to love the experience of being mistaken for one.

Geese are regarded an alternative to watchdogs, and Tony appears to go a bit farther. His best pal William likes barking a lot while they’re together thus he’ll always respond by barking back.

Another dog named Betty observes in confusion as Tony and his companion have a lovely discussion.

Goose believes that he is a dog.

A vast and diverse family lives with him, according to the Daily Mail. Beyond the dogs, he lives in the same house as an Eggboi the Quaker parrot as well as two magnificent horses named Henry & Jay and Dot the hen who nurtured him from infancy.

William and Tony’s friendship is endearing, and it’s fun to see them share their weird discussions. This relationship between these two buddies is still a mystery to the mother of the geese, but it makes her extremely happy when she sees them interact.

Tony celebrated his first year with a wonderful watermelon cake, which he shared with Dot.

His mother captioned a video of him with Dot:

“It’s hard to think Dot hatched a small yellow ball of fluff that could fit in the palm of my hand a year ago, and has now grown into this huge gorgeous guy!”

Geese are excellent protectors, according to Pets4Homes, and their high-pitched squawk can warn their family of any danger. They are extremely protective creatures, which becomes even more so during mating and hatching season.

Their vision is better to that of humans since they can perceive ultraviolet light, and they can identify potential predators. If they feel threatened, these creatures may be quite violent.

“With his energy and empathy, he is Dot’s personal bodyguard, dog companion, sprinkler buster, and a healer of wounded hearts. Even though he’s now a hormonal goblin, he’s completely gorgeous.”