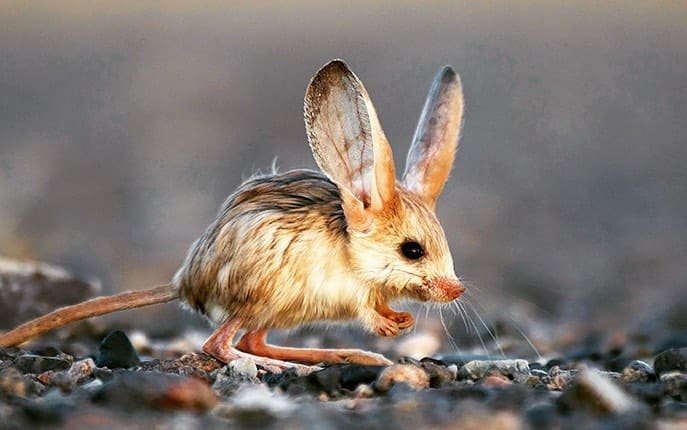 There are a lot of creatures out there that don’t look like the rest of their species. They were simply destined to stand out. These creatures will glow in the way in which they were created. That is exemplified by this beautiful little long-eared jerboa. It has the body of a mouse, rabbit ears, a pig’s snout, and kangaroo-like rear legs. Isn’t it lovely that it’s a combination of four species? The photographs of this cute long-eared jerboa have captured the hearts of millions of people, particularly those who like this small creature. If you’re seeking for strange and intriguing animals, have a look at these photos. It’ll brighten your day!

This fascinating long-eared jerboa looks a mix of a mouse, a rabbit, a pig, and a kangaroo.

The long-eared jerboa is a small, nocturnal rodent that looks like a mouse. It’s also famous for its big tail and very big ears. The animal is around 2.8 to 3.5 inches long, with a tail that is twice as long. During a Zoological Society of London trip to the Gobi in 2007, this strange jerboa was first seen on film in the wild. Long-eared jerboas also have the biggest ears in the animal kingdom when compared to their size.

The deserts of southern Mongolia and northern China are home to these long-eared jerboas. They spend the day in subterranean tunnels that they excavated themselves because they are mostly nocturnal. The creatures mostly eat flying insects.
A long-eared jerboa has a lifetime of 2 to 3 years.

The animal’s ears are around two-thirds the size of its body.
Long-eared jerboas can leap rather high since their rear legs resemble a tiny replica of a kangaroo’s. It doesn’t use its front legs since they’re too short to go around.

Talia Yuki Moore, a Harvard graduate student studying locomotion in three jerboa species, told National Geographic, “Jerboas have very erratic locomotion, adopting a zigzag trajectory, and can jump several feet both vertically and horizontally, even though they are usually about the size of your fist.” The tail of the animal is twice as long as its body.