Donkeys on the scenic Greek island of Santorini are getting hurt when carrying heavy visitors, prompting residents to turn to mule farming in order to transport larger tourists. During the summer, up to five cruises per day bring approximately 1,200 tourists to the small island to admire its idyllic white houses.

Donkeys have traditionally been used to transport people through the famous staggered areas that cannot be accessed by vehicles on Santorini, which is known for its mountainous terrain.

Animal rights advocates allege that, as obesity rates grow, animals are being forced to carry increasingly heavy burdens while working long hours, seven days a week, without shelter, rest, or water, causing spinal damage. According to the Daily Mail, saddles can cause open wound infections. According to animal welfare organizations, as the number of overweight visitors increases, locals who want to get the most out of their animals are increasingly growing mules, which are larger and taller, have higher stamina, and can carry heavier loads. 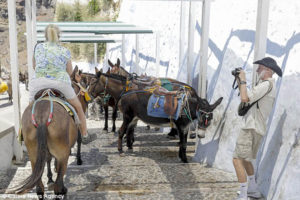 According to a spokesman for Help the Santorini Donkeys:

‘It is suggested that animals carry no more than 20% of their own body weight. Obese and overweight visitors, along with a lack of shade and drink, as well as the intense heat and cobblestone steps, are to blame for the problem. There should be a weight limit.

Present should be no more than 50kg for donkeys, but how would that be enforced, and who would be there to make sure it happens? They must now rely on mules since donkeys are simply not strong enough.

Christina Kaloudi, 42, came to Athens ten years ago and founded the Santorini Animal Welfare Association (SAWA) to assist overworked donkeys. Over the previous decade, the number of overweight tourists visiting the island from the United States, Russia, and the United Kingdom has more than doubled. 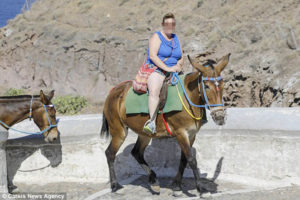 Locals report that donkeys make four to five journeys to Fira each day, in temperatures as high as 86F (30C), frequently without resting, sun protection, badly fitted reins, or drink. 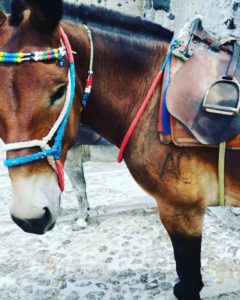 “The island’s holiday season is now considerably longer than it used to be, which means the donkeys work all year. When they’re not hauling tourists up the steps, they’re lugging building supplies or carrying big rubbish bags.

Animal rights activists work to end the maltreatment of these animals. 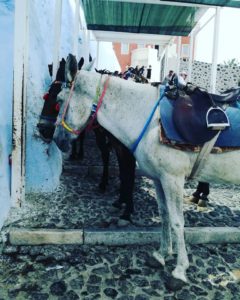 Some owners adhere to the rules, but in general, these unfortunate creatures are exploited and then dumped when their working life are completed.

“They are forced to serve in filthy conditions with little access to water, shelter, or rest, and I find them tied up outside my shelter, barely alive.” 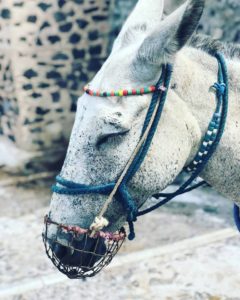 Christina reports that as donkeys approach the end of their working life, they are frequently abandoned or tossed down a cliff. Donkeys are tough creatures that will keep going as long as they can, so when they come to me in this condition, I have nothing but admiration for them. I have 15-25 donkeys here, but I’m pleased people bring them to me since the owners would typically let them die because they don’t want to pay to have them put to death. They are aware that my safe haven is here. Several animal rights activists were even attacked while demonstrating in Santorini against donkey cruelty.