A small child in the Canadian neighborhood of Exploits Valley was recently told that he could choose whatever animal he wanted from the shelter. It was reduced down to a puppy dog and a cat — his decision — and the subsequent Facebook post had the internet swooning.

Easton went to the shelter to look for a new pet and came home with a massive, orange, old cat.

The Exploits Valley SPCA is the name of the shelter, and two cats named Tiny and Trinity were just adopted. Their owner had to drop them off at the shelter due to sad and unanticipated circumstances, so they might find new homes.

The Exploits Valley SPCA jumped on Facebook right away to attempt to locate these two kitten kitties a forever home. It would be difficult, though, because they were elderly and Tiny was rather huge and overweight.

“Tiny isn’t choosy when it comes to food, but he is ‘weight challenged’ and has a huge round tummy that he enjoys having rubbed.” According to the Facebook post.

Tiny and his brother Trinity were not attached, so it was fine if they were adopted separately — it was only a matter of when.

Easton made an instant connection with the big, orange senior cat when he went into the shelter with his mother. Tiny was moving to a new home, and it was official at that time.
Tiny was allowed out of his cage and instantly proceeded to hug and bond with his new owner while Easton, his mother, and Tiny were traveling back home. It was obvious that he was overjoyed to be returning home with a new family. 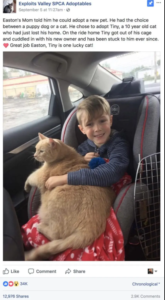 Despite the fact that the huge cat was characterized as “shy” by the shelter, it didn’t take long for him and Easton to become old friends. Tiny is basically a giant teddy bear of a cat, and his large stature reflects the enormity of his heart.

We want and hope that every cat, like Tiny, finds their way into a loving and caring family. The Exploits Valley SPCA can be contacted to inquire about Trinity.

The whole Facebook post is included below, it’s clear from the responses that the entire Internet is ecstatic for Tiny — and Easton!