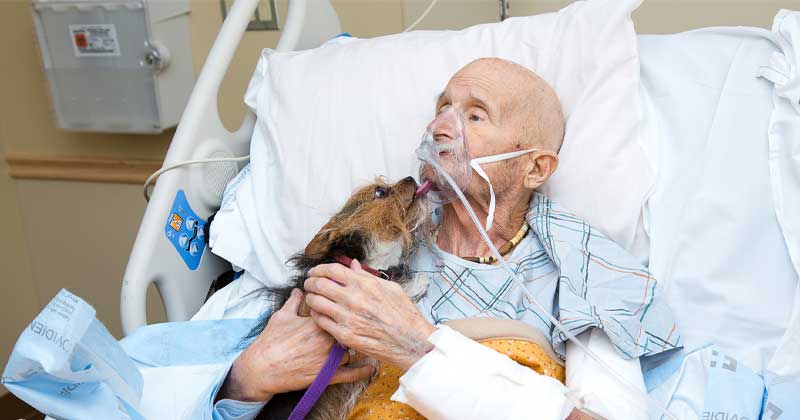 Dogs are, without a doubt, man’s best companion. They’re the ideal pet, a devoted companion that can keep you company and provide consolation when circumstances are difficult. And one man’s faithful companion was there for him when he needed him the most: on his deathbed. It’s a sad story, but it demonstrates the wonderful relationship that exists between humans and their dogs in the finish. John Vincent, a Vietnam-era veteran Marine, is near the end of his life.

The 69-year-old was admitted to the Raymond G. Murphy Veterans Affairs Medical Center for hospice care. Sadly, this meant he had to say goodbye to Patch, his 5-year-old Yorkshire terrier.

He surrendered the dog to Albuquerque Animal Welfare because he had no family in the region.

Because John is presumably nearing the end of his life, Amy Neal, a palliative care social worker, asked him if he had any last wishes. John’s decision was straightforward: he simply wanted to see his dog one more time. The workers were moved by his dying desire and agreed to realize it, resulting in a lovely final reunion between the man and his dog. Amy Neal told the Albuquerque Journal, “I asked him if it’s something that would be meaningful for him.”

“It came together fast as well.” “It was an instant ‘absolutely,’ and let’s do all we can to get it done,” said Danny Nevarez, director of Animal Welfare. “It was only a matter of bringing Patch over here.” Patch was brought to the hospice by members of the Albuquerque Animal Welfare team. John was moved to tears when he saw his old friend again:

Vincent remarked to Patch, “That’s me, that’s daddy.” “Are you happy to see me?” I ask. I’m glad to see you.” Patch was said to have been calm for the most of the trip, but got upset as they reached the hospital. Nevares told the Journal, “It’s almost like he knew, he just started whimpering.” “As though he was anticipating something.”

When Vincent’s neighbor produced a litter of puppies, he adopted Patch. He named the dog after a little patch of white fur on the dog’s chin that resembled John’s chin hair. Vincent explained, “We were the patch brothers.” Patch was the smallest of the litter, which he loved since he could take him on motorbike journeys.

It was a heartfelt reunion of two longtime friends. Unfortunately, it will most likely be their final farewell. Even still, it’s great that they were able to arrange the reunion, giving the veteran a little joy in his dying days. “It was such a heartwarming experience!” says the narrator. Albuquerque Animal Welfare posted a status update on Facebook. “They were overjoyed to see one other and bid each other farewell.” “It was a privilege to fulfill this veteran’s ultimate wish.”

If there is a silver lining, it is that Patch will be well cared for once his owner passes away. He’s returned to the animal shelter, where he’s seeking for a new home, and Animal Welfare claims they’ve already found a proper adopter. But, of course, John will always have a place in his heart. It’s a wonderful, sad story about how, even in our dying hours, our dogs can be our best companions. Spread the word about this story!