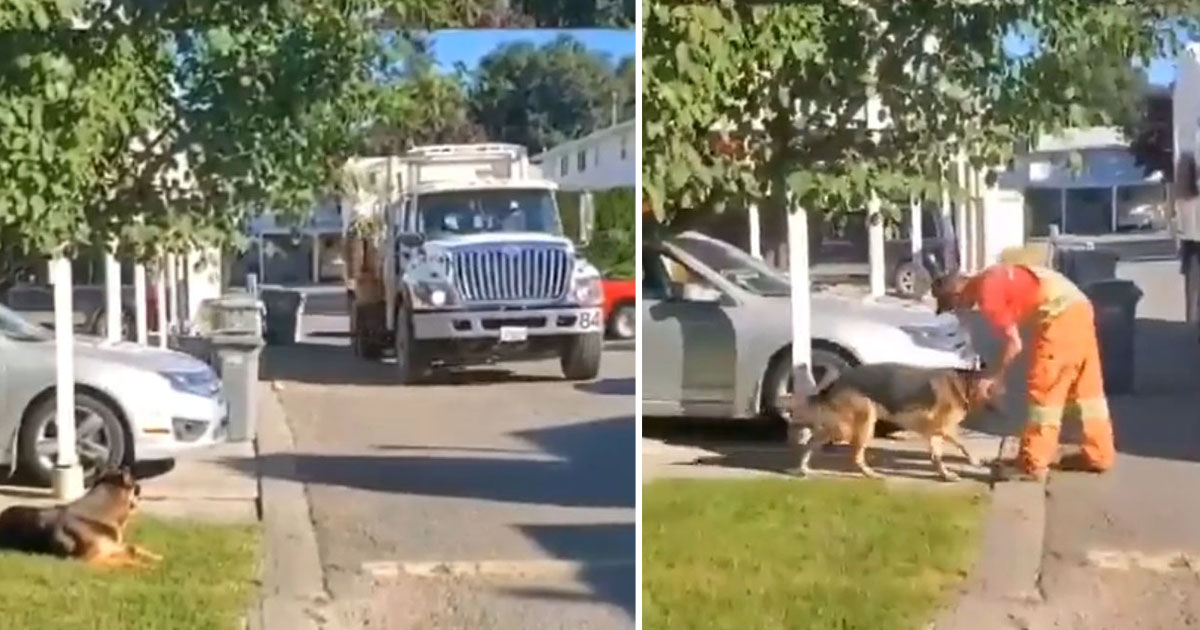 Jett, a lovely 4-year-old German Shepherd, has always relied on his ability to make friends. One of the most important relationships, though, is with Curt Stickley, the garbage truck driver.

Jett’s father, Derek Molter, says the connection started around a year ago. Curt decided to ask the garbage truck driver if he may come over and pet the dog while he was out in the yard.

Derek, who spoke to Dodo,

“The driver exited the vehicle and approached Jett, asking whether it was acceptable to give him a treat. Of course, I said yes, and we became friends.”

Every week, the dog waits for the garbage truck driver.

This family has a nice routine that they have created. Jett wants to welcome Curt like this for a few seconds, and it appears that they both enjoy that time.

“If I’m home, I let Jett out once a week, and he goes about and sits on the grass, patiently waiting for his friend Curt to come over and bring him a treat.”

Derek couldn’t keep up with the garbage truck going by his house a few days ago, and Jett couldn’t wait for his pal for two weeks in a succession. Curt was obviously missed by the dog, and he wasn’t the only one.

The chapter finds some dog treats in his mailbox after receiving a message that stated “look inside.”

Curt, too, missed Jett and wanted to express his feelings in some way. Derek was so impressed by the gesture that he decided to share the photos on Facebook, and the tale quickly went viral.

“I even called the Kamloops City Solid Waste Department and spoke with the driver’s supervisor to express my gratitude for their great service.”

Derek makes every effort to be home for the garbage truck tour so that these two friends may have a brief reunion and Curt can see the dog for at least a few seconds. Jett’s routine is one of his best.