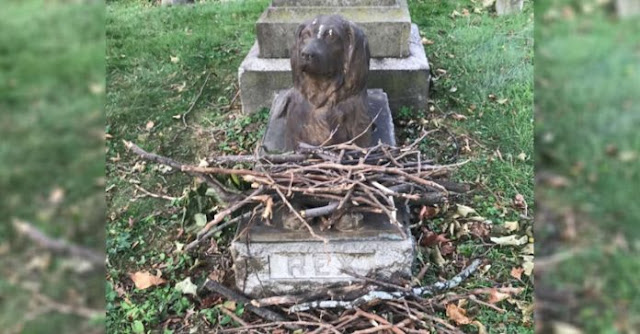 From artists to Civil War generals and politicians, the Green-Wood Cemetery in South Brooklyn is home to a variety of elites. A buried tomb, on the other hand, has been much more interest from tourists.

Rex, a bronze statue of a dog sleeping on a stone platform with his name etched on it, stands among the hundreds of angels and obelisks. Rex has been defending his owner’s property on the corner of Sycamore and Greenbough avenues for almost a century and is still a nice pup.

When John E. Stow died in 1884, he was one of the city’s most experienced fruit sellers, and Rex is said to be his dog. People collected twigs and fallen branches for years to leave in the hands of the virtuous lad.

“When it comes to Rex, he definitely stands out,” said Stacy Locke, Green-Wood Cemetery’s communications manager. “People can see it from the road; it’s in a prominent location, right past a two-way crossroads.”

During the COVID-19 epidemic, Green-Wood became a favorite location for individuals seeking to get away from the throng and appreciate nature. Rex’s firewood user stories in tandem with the number of guests.

Rex isn’t the only animal memorialized in the 478-acre cemetery, yet.

Before the cemetery’s board of directors forbade animal burials, several additional pets were buried alongside their owners. “There’s another dog sculpture with a similar intriguing narrative, but it’s a little different,” Locke explained. “They generally offer the one toys,” says the narrator.

A 19th-century document in the Green-Wood archives mentions the site of a “bronze figure of a dog,” but it’s unclear whether Rex is buried beside his owner. “I think people want to imagine there’s a dog buried there, and there very well may be,” Locke remarked. “However, it’s difficult to say.”

The Rex monument is a beautiful reminder that a dog’s love endures no matter how much time passes.