This snake may best be described as before-it-was-cool-blooded, based on his effortlessly stylish look.

Karlie Gray’s photographs of the fairly fashionable reptile, a Western rat snake, were recently published by Texas Parks and Wildlife, who’d reportedly been discovered out and about in the wild — possibly on his way to some underground coffee shop you’ve probably never heard of.

The snake’s facial characteristics give the impression that he’s wearing a pair of huge black sunglasses, and he also has a delightfully sarcastic mustache to complete the hipster appearance.

(We’re guessing he left his fixed gear bike outside the raw organic kale business locked up.) 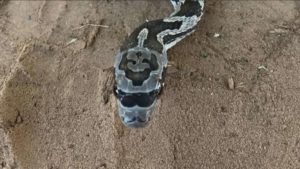 Even among species that are a bit more mainstream, it’s always worth pausing to admire the tremendous diversity of the Animal Kingdom.