Your family dog goes missing when you’re on vacation. You look, you pray, and then you look some more. Your head may tell you it’s time to give up hope as the days pass with no news, but your heart never does. And sometimes that hope is rewarded.

The Battista family of New York City was on vacation in Ocean City, Maryland when their 2-year-old Boston terrier Fisher went AWOL on July 4, 2020.

The Battistas swarmed the area with missing posters, bombarded social media with updates, and even got Fisher on a local floating billboard.

Due to a lack of leads, the family opted to stay in the region for a prolonged period of time. They hired a tracker and even spoke with a “animal communicator” in the hopes of employing canine ESP to track down Fisher’s whereabouts—all to no avail. The family also set up a #findfisher Facebook page, which quickly gathered 8,000 followers, and launched an online fundraiser to raise awareness and aid them in their efforts to bring their beloved fur baby home.

“We’ve alerted Ocean City police, fire, beach patrol, postal service, Scopes, lifeguards—you name it!” Matthew Battista wrote to Fisher’s GoFundMe page.
“We’ve put up signs from the inlet to 77th Street, but we’ve expanded our canvassing to the adjacent Delaware beaches of Fenwick, Bethany, Dewey, and Reheboth,” says the group. We’ve extended our stay in Ocean City and arranged for a professional dog tracker to join us, in addition to making daily searches by vehicle, foot, and bike.”
Although they eventually were forced to return home to New York minus Fisher, the Battistas refused to give up. But even with the massive media blitz, it seemed Fisher had pulled a full-on Houdini.

Undaunted, the Battistas kept the wheels of the Internet grapevine turning, refusing to let the details of Fisher’s disappearance be forgotten. As a result, Fisher became something of a media darling in absentia.

And that’s surely part of the reason the Battistas’ perseverance paid off.
On April 20, 2021, 290 days after Fisher made his unauthorized Independence Day exit, Baltimore City resident Wayne Horn was performing maintenance on his motorcycle when he noticed a stray dog in the road.

MORE: Lucky Dog Gets Adopted By Oil Rig Worker Who Found Him Swimming 135 Miles From Thai Coast
Horn told Delaware Online, “I pulled him over because vehicles speed up and down my road.” “When he approached me, we offered him water. He was happy when he lay down, and he didn’t want to leave.”

Horn’s buddy uploaded photos of the lost dog to Facebook, and the comments of “That’s Fisher!” came back like a boomerang.

Although the findings were later confirmed by a micro-ship scan, Elissa Battista recognized Fisher immediately. “From the moment I saw the photos I knew it was him from the markings and his little tongue sticking out,” she posted to Facebook.

RELATED: Inspired By Dog’s Survival During Wildfire, She Donates 7,500 Pet Oxygen Masks–And Adopts the Pup
The reunion was planned quickly. The Battistas had some local friends pick him up from the Horns, and Elissa then travelled the five hours to get Fisher and bring him home. Fisher was in great form, save from mild symptoms of probable frostbite. 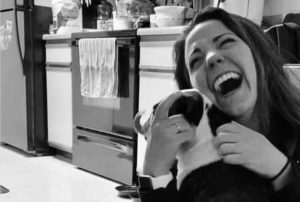 The Battistas are so happy to have Fisher back that they’re doing their best to pay it forward once more by using the power of social media. The Facebook group originally known as “Find Fisher” has been renamed “Find Fisher’s Friends” and is now dedicated to helping other pet parents in finding their missing four-legged family members.
MORE: This Dog Was Lost in the Woods for 10 Days With a Winter Storm on the Way – But a Drone Saved the Day

The family has also pledged to apply any leftover funds from their GoFundMe to the charity of Fisher’s choice once he was safely back with his family. While we’re still awaiting “woof” on what that might be, the takeaways from this story seem clear:
Microchips and social media are efficient ways for reuniting missing dogs with their families. The best chance of a successful outcome is to use both.

And, while there’s no certainty of a reunion, don’t give up hope just yet. Because, above all, as Fisher’s 10-month hiatus demonstrates, hope has no expiration date.