Dani Viverito has had a soft place for dogs since she was a child. She would bring a stray or injured dog home every time she saw one, which is why she and her husband now have seven rescue dogs.
Viverito told The Dodo, “We kind of just gradually became rescues; if there was a dog in need, we took them home and tried to give them the finest life ever.” “We’ve been together for 18.5 years and have had just as many rescues!” exclaims one of the rescuers. 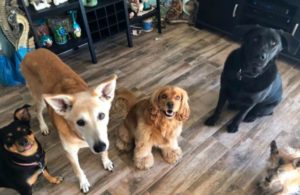 There are a lot of different personalities running around the house with so many rescue dogs with so many varied backstories living under one roof, which is why Viverito and her dogs have a very rigorous plan in place to ensure that everything runs smoothly but no one is left behind.

“They all get along for the most part, but two are more ‘unstable,’ so I have the five on one schedule and the two on another, and I switch them out every three hours around the clock,” Viverito explained. “At this point, it’s so engrained that we don’t even need alarms!”
That way, everyone has an equal amount of… time to play, potty, eat, snuggle with humans, and go about doing their own thing, and then they have three hours of nap time to sleep, play, or do whatever they want.”

When it’s time for a nap, each dog knows just where to go because they each have their own personal bed. 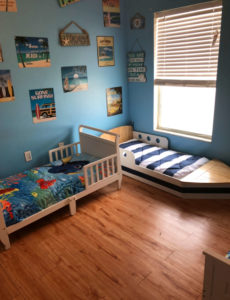 “When I say cookie time, they all run and break off into their allocated rooms,” Viverito added. “Jax, Sasha, and Annabelle are in one room, while Muppet and Harlin are in the other. Tyler and Tucker have their own rooms when they’re sleeping.”

The dogs not only have their individual bedrooms, but they also have their very own toddler beds. The toddler beds are the right fit for them, and each and every dog adores them. 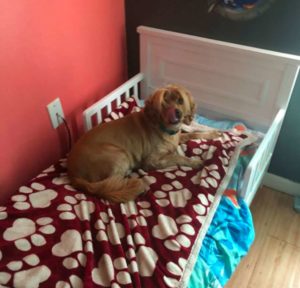 Viverito got the idea to get her dogs toddler beds since she had a couple queen-sized mattresses laying around for the pups who couldn’t get up onto beds and couches. The large, heavy mattresses were difficult to move and clean, so she eventually moved to beds designed for smaller humans, which appear to work great for a pack of dogs. 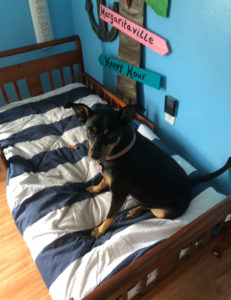 “I can handle all the sheets at once and the comforters two at a time with toddler beds because everything is small,” Viverito explained. “Compared to hefty mattresses and beds, sweeping, vacuuming, and mopping is easier with toddler beds that are light and slide around!” 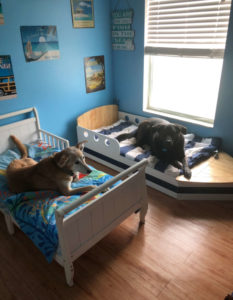 Having seven rescue dogs live in the same house can be stressful at times, but Viverito and her husband adore their pack and wouldn’t exchange them for anything.