Magnolia (Maggie) was discovered alone and very pregnant walking the streets of Fredericksburg, Texas. She was picked up by local animal control, but because she was pregnant, the Hill Country SPCA took her up and immediately found her an incredible foster home.

Maggie’s foster family could tell she was a fantastic dog from the minute she arrived, with her motherly instincts immediately in action with the family’s two young children. 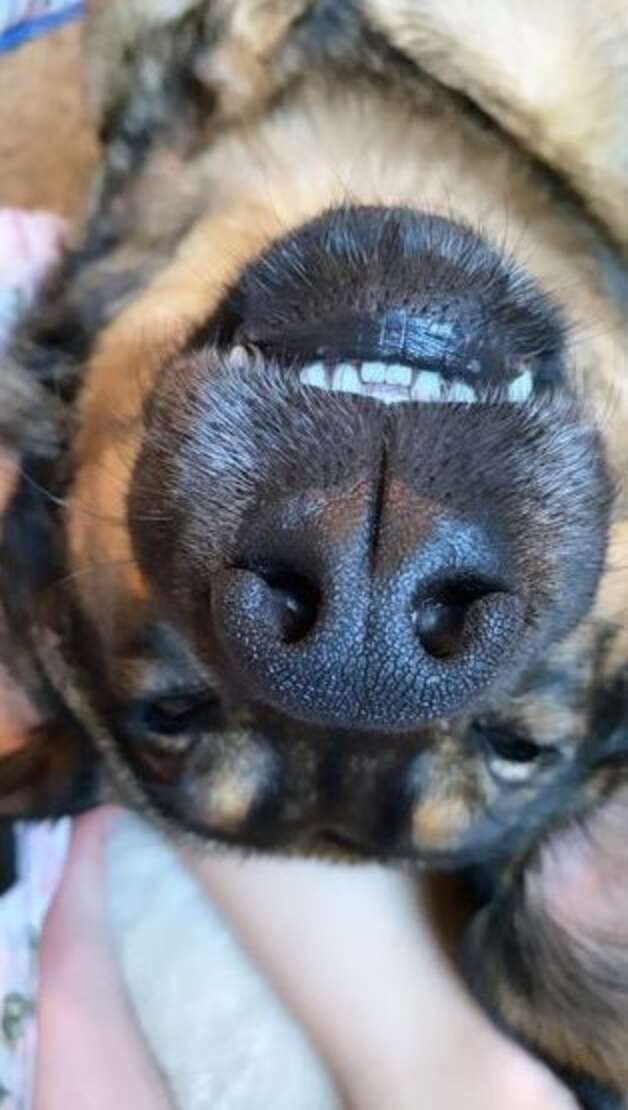 Maggie’s foster mom, Aubrey Morgan, was a little apprehensive because she’d never fostered a pregnant dog before. She did extensive research to ensure that she would be prepared to assist Maggie when the puppies arrived.

Morgan told The Dodo, “I had read so many resources, seen so many whelping YouTube videos, and gathered hundreds of dollars in whelping and emergency goods to have on hand.” “I had heard somewhere that it was critical for puppies to stay warm after they were born. If they aren’t warm, they won’t be able to digest food and will begin to fade.” 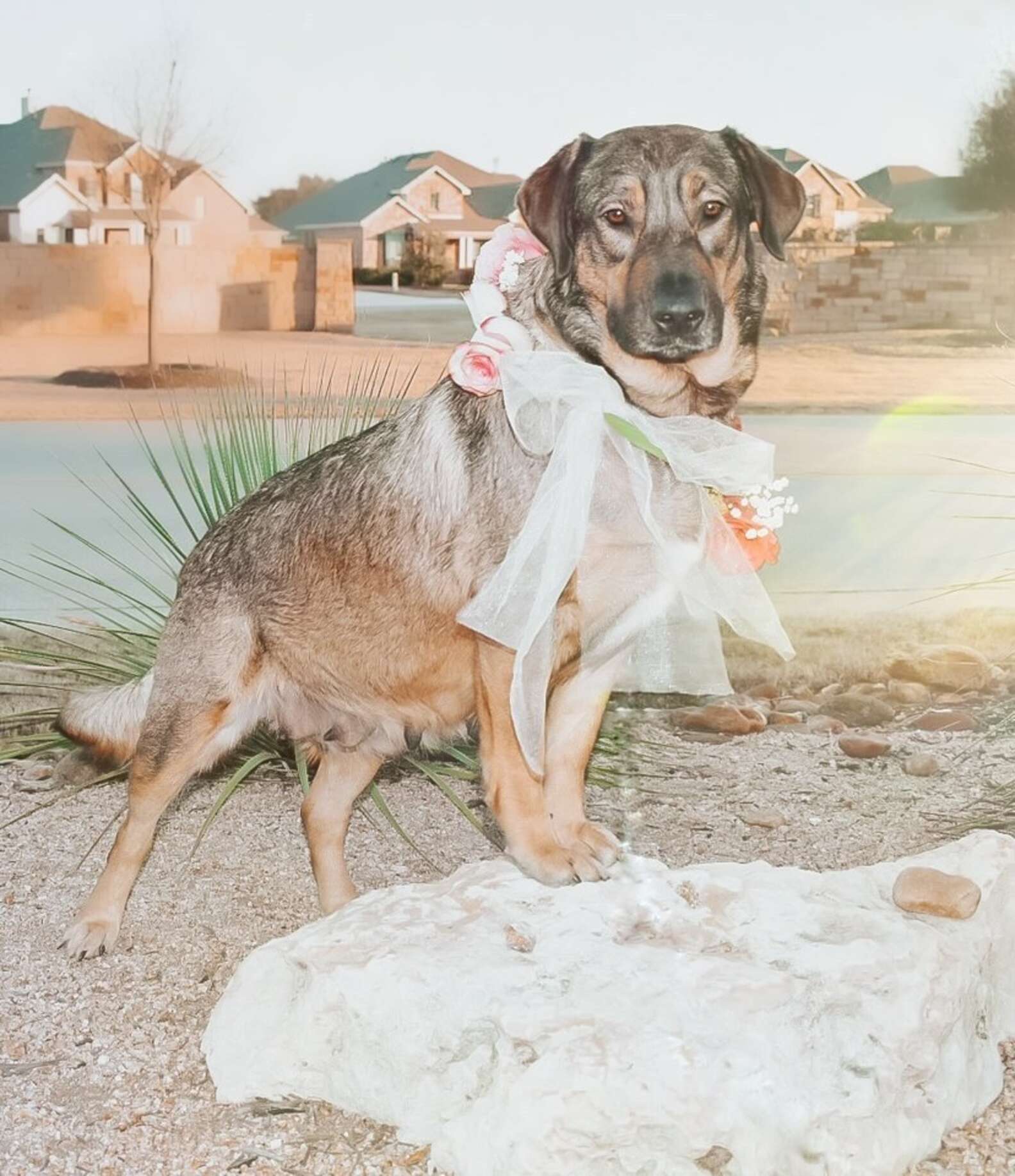 Maggie’s family was worried but ready as she moved closer to giving birth — until they lost power during the recent winter storm that ripped across Texas.

Maggie began to exhibit indicators that the puppies might be arriving soon shortly after they lost power. Her family had anticipated that power would be restored by the time the puppies arrived, but when the first puppy arrived at 12:30 a.m. on February 16, there was still no power, and the house was quickly becoming cold.

Morgan explained, “Our house was in the 50s and decreasing (it was 1 degree outside that night).” “We moved her into our guest bathroom, where the shower was steaming to attempt to warm the room, and my husband was heating water to put in bags to keep the room warm as well.” 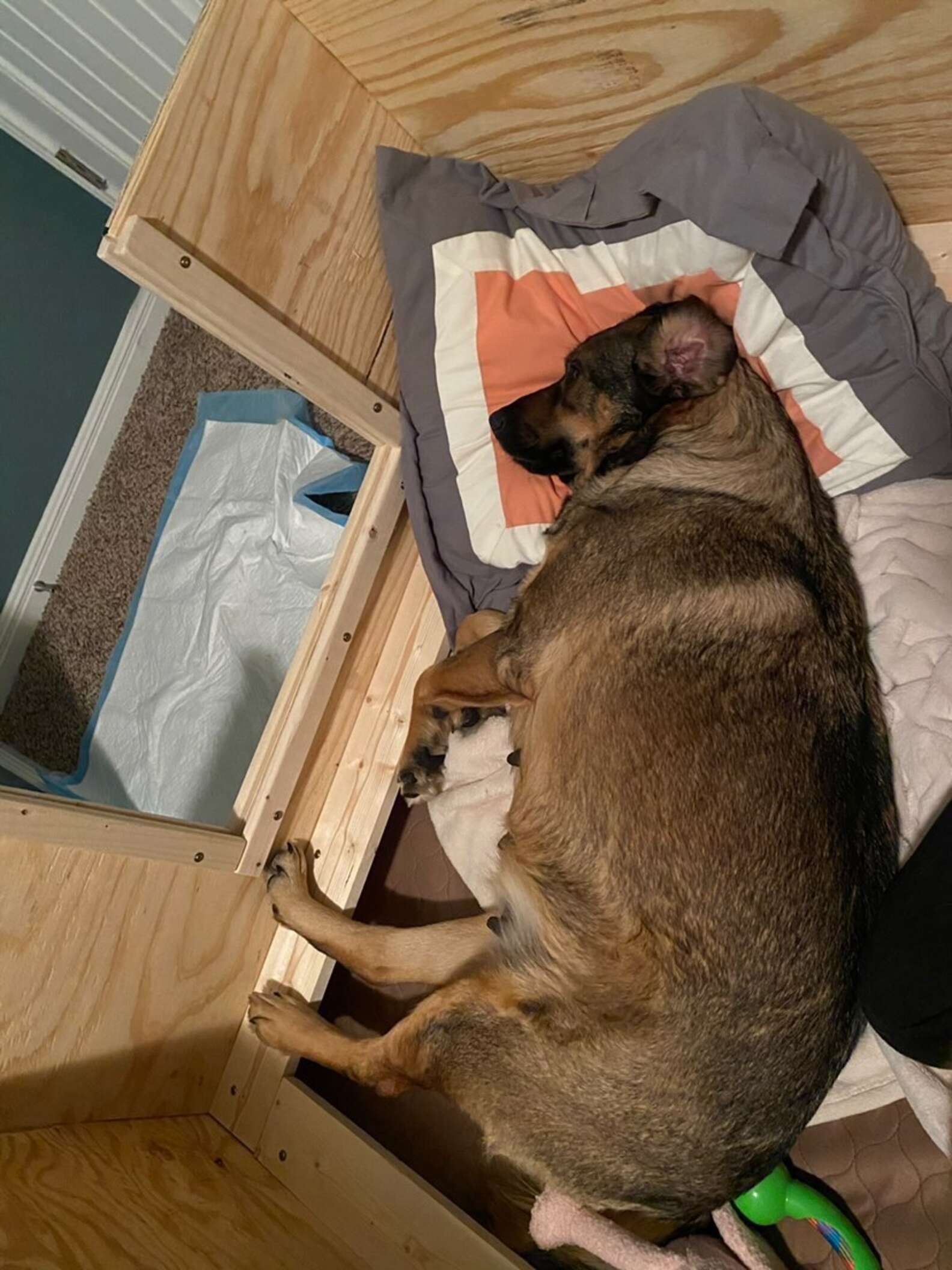 The couple tried their hardest to keep each puppy warm when they were born, but the house was simply too cold, and they realized they needed to do something to keep the new little family safe.

“We noticed, despite our attempts, the puppies were still too cold when the fourth dog was born,” Morgan added. “My husband began prepping the car for Maggie and the puppies at that point. Maggie was in the car with her last three puppies. We put them in the car at 2 a.m. and left them there for nearly 12 hours.”

When Maggie was taken in by the family, they promised to support her and keep her safe while she was pregnant. They did everything they could to honor that pledge, even in the face of extenuating circumstances. 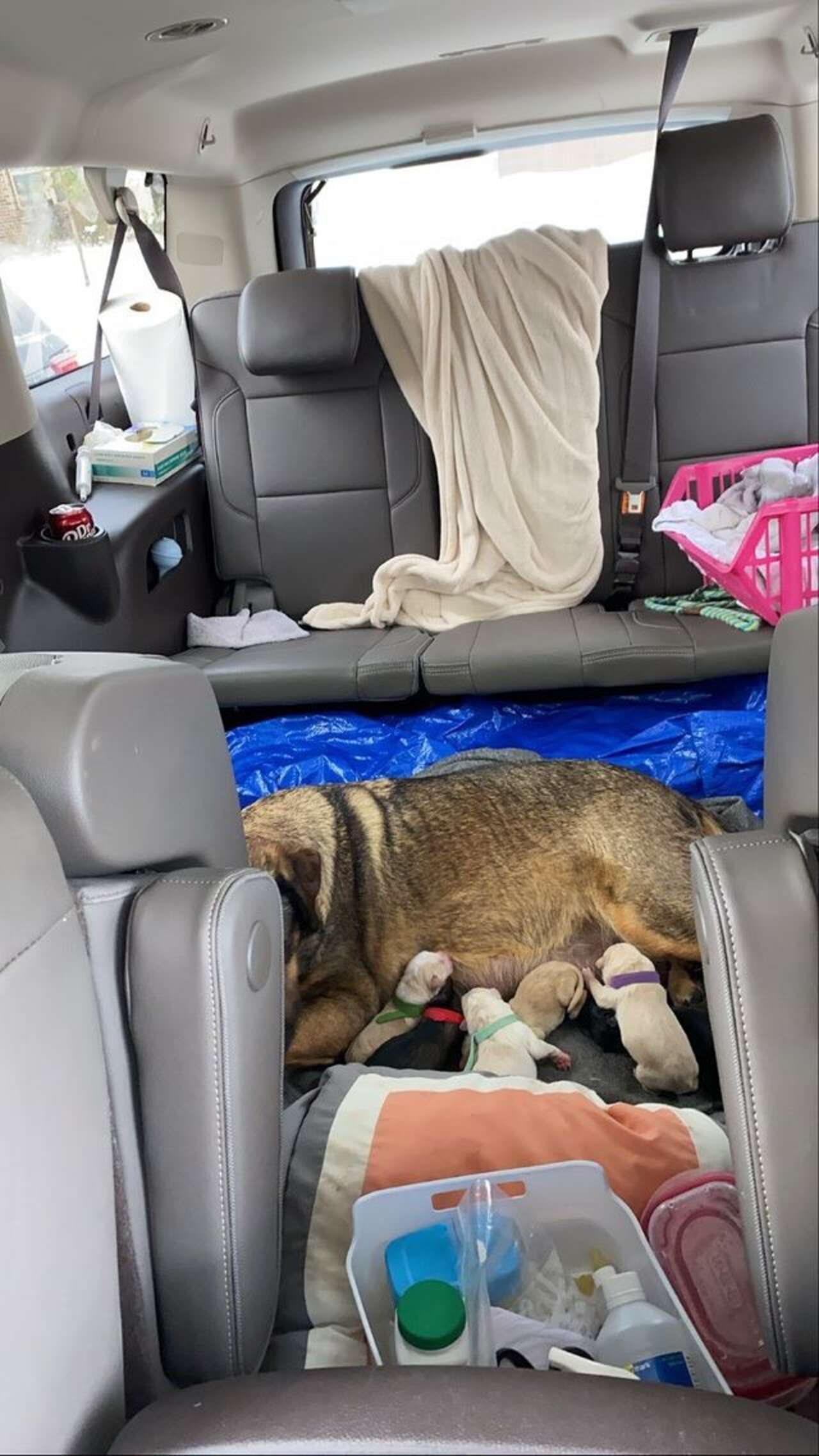 The couple was trying everything they could to get a generator to get at least part of their house warm again as they were keeping an eye on the tiny family in the car. They eventually found one and returned everyone to the house. However, the rest of the house became too cold for the couple’s own children after a while, so they agreed to leave until the electricity was restored.

“We didn’t want to drive because the roads were treacherous, but it turned out to be our best option,” Morgan explained. “So we drove 45 minutes to my parents’ house (which had power) with our family of four, three dogs, mama, and her seven puppies and stayed there till Friday!” 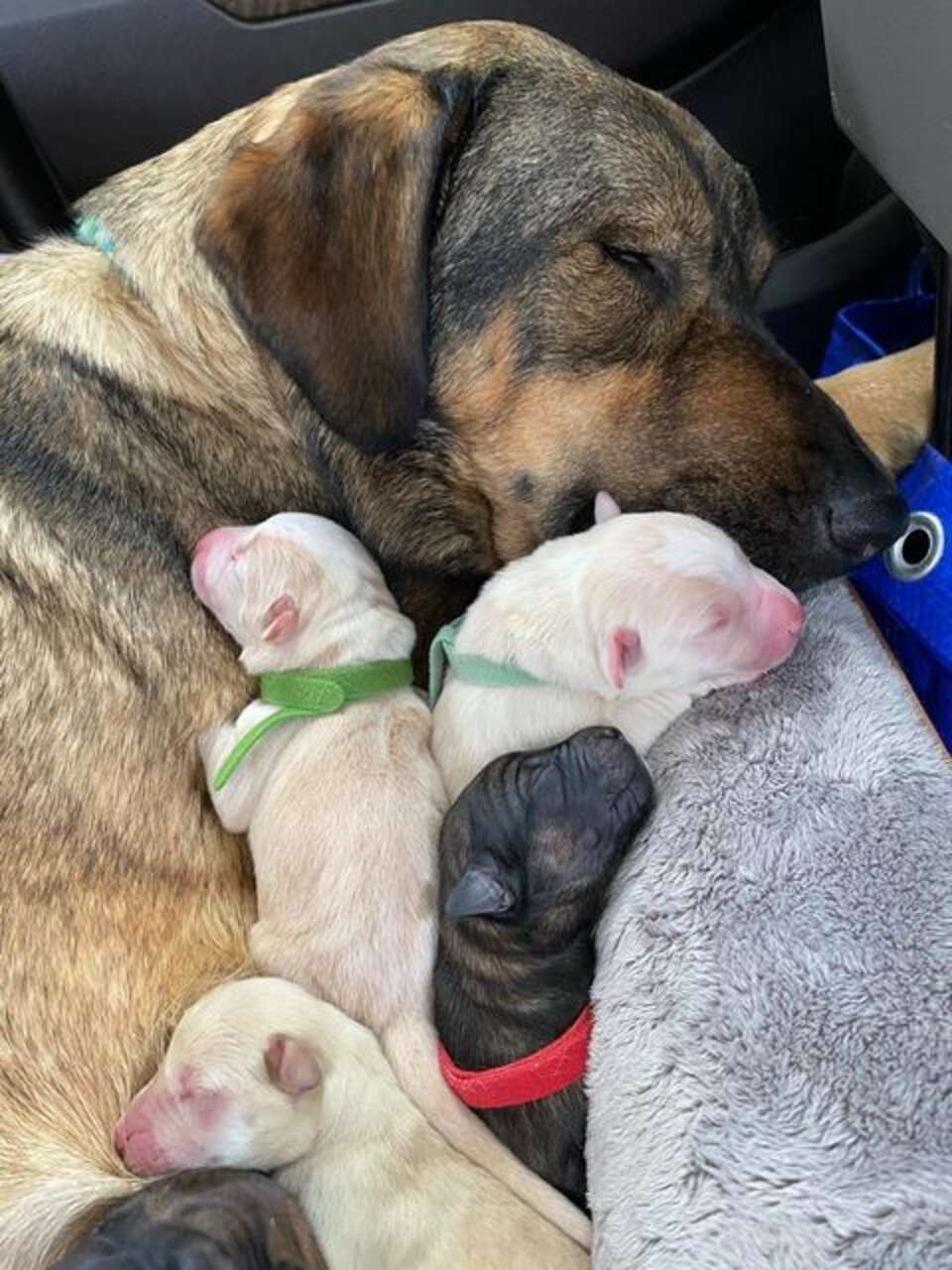 The power was eventually restored, and everyone, including Maggie and her new puppies, was allowed to return to their homes. Daisy, Poppy, Ash, Rosie, Dahlia, Clover, and Aster are the names of the seven puppies. Despite a tumultuous start, the puppies are all doing exceptionally well, growing and developing normally. 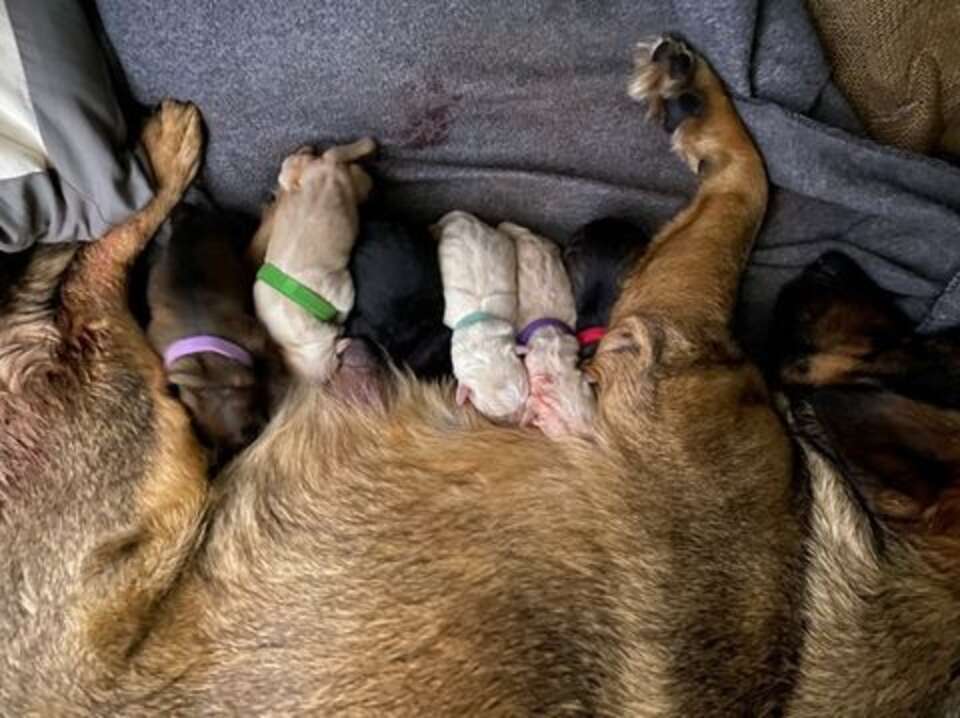 Morgan remarked, “Maggie is so gentle.” “Not just to her puppies, but also to my two-year-old and nine-month-old, she is really nurturing… It’s been incredible to watch her grow into a mother. With her puppies, she’s a natural.” 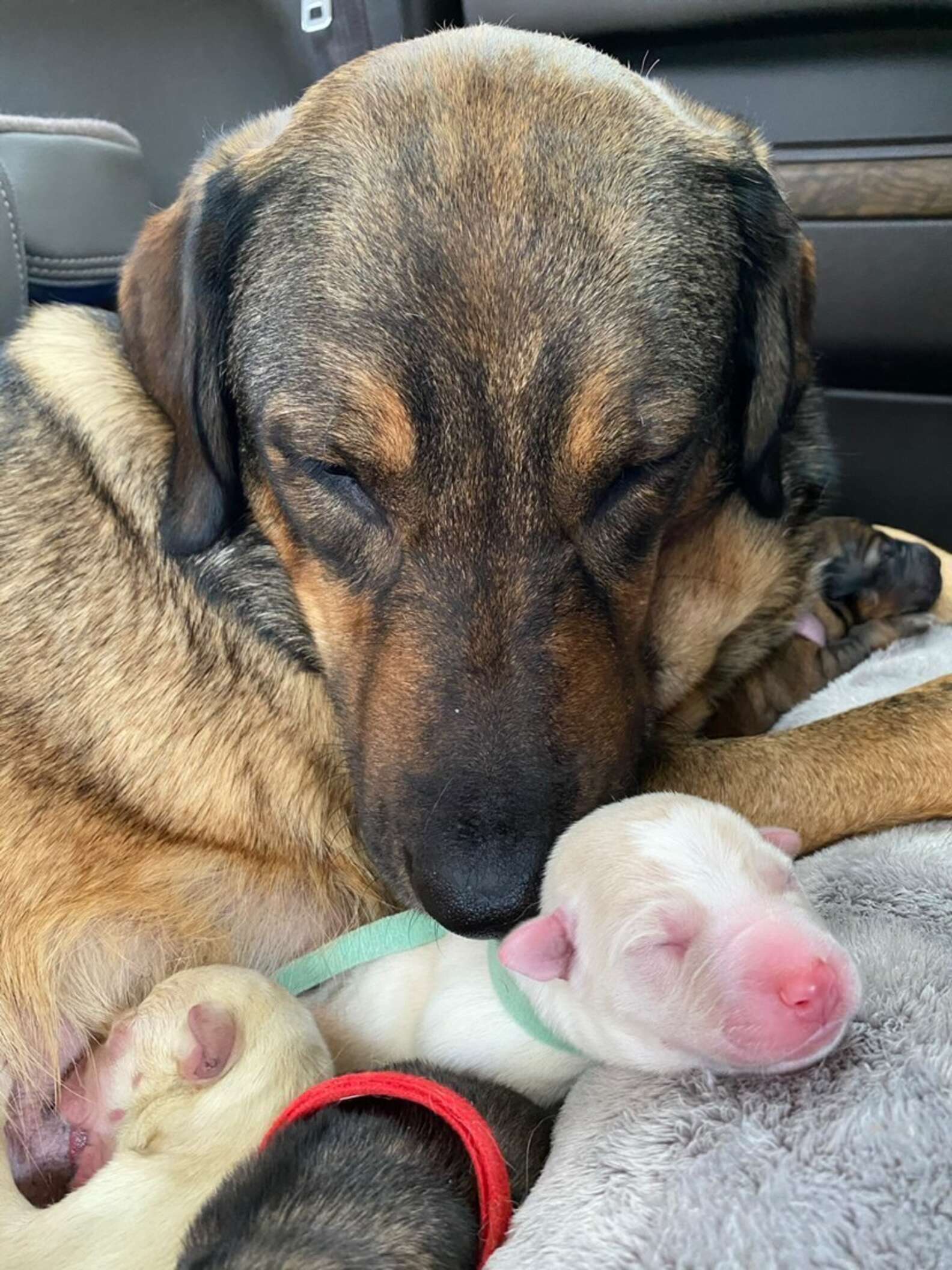