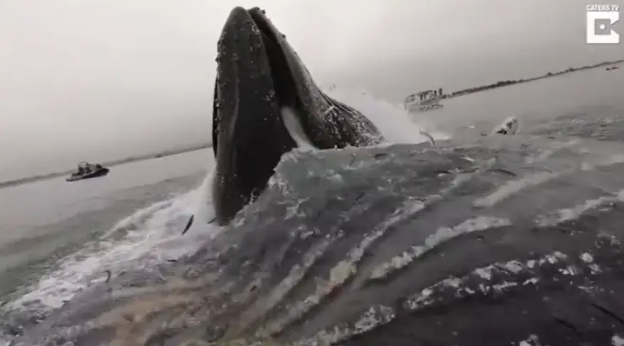 Whales are not just the biggest mammals on this planet, but also the most magnificent. They’re so great, in fact, that a whole country was named after them. If you’ve ever been whale-watching, you’ll know just how incredible it is to see them in the flesh. But no matter how close you got, you probably didn’t quite get this near to them.

This insane footage was captured by David Rogers while he was kayaking half a mile offshore at Moss Landing in California and shows the crazy moment a whale breaches just inches away from him and his kayak.

The video – which is very wobbly, as it would be if you’re in a tiny kayak when a whale breaches right next to you – shows fish almost flying out of the water as the whale breaks through the surface.

Thankfully, David, who’s a civil engineer, managed to keep hold of his phone and capture the exhilarating moment as it happened.

“It all happened so quick, there wasn’t much time to think,” he said. “I knew the whales were not out to attack or hurt me. I remained calm and tried to keep my balance as one whale pushed my kayak to almost the tipping point.”

It’s the latest in a number of spectacular sea creature moments captured on video in recent months, including a bunch of dolphins playing with a humpback whale and the savage moment a shark attacked another shark.

Most incredible of all, however, is the footage showing a whale protecting a diver from a shark by using his fin – and even lifting the diver out of the water at one point.

Credit: Caters
Credit: Caters
All of which poses the question that, if we can co-exist with other animals who are totally different from us, why do humans find it so hard to live together peacefully? But that’s a whole other philosophical conversation that would last years without coming to any decent conclusion so we’ll drop it.

Instead, we’ll just keep watching this wonderful moment and hope that, at some point in the future, we get to experience something equally as exhilarating firsthand.