Aasha, a Bengal tiger, was just 9 months old. But she weighed around 30 pounds, which was a size more appropriate for a 3-month-old cub.

Vicky Keahey, founder of Texas’ In-Sync Exotics Wildlife Rescue and Educational Center, first learned this startling fact in March 2011 through her U.S. Department of Agriculture (USDA) inspector, who was concerned about Aasha and wanted to transfer her into Keahey’s care.

“I asked how could a 9-month-old tiger be that small,” Keahey told The Dodo. As Keahey learned more, Aasha’s sad story came together piece by piece – painting the scene for an all-too-familiar scene: Aasha belonged to a traveling circus. She shared a cage with a much larger tiger, who frequently picked on her.

Aasha when she first arrived to In-Sync | IN-SYNC EXOTICS
The USDA inspector explained that, during a recent investigation, it was discovered the animals at the circus weren’t receiving proper care, noting that there was something particularly wrong with Aasha, although it was uncertain what.

Keahey agreed to take her in and, as soon as she saw Aasha in person, she knew exactly what plagued the young tiger cub: ringworm.

“Aasha’s bald spots covered almost her entire body and her skin was dry [with] cracked, darken areas and bleeding,” Keahey said. She also had open wounds, which Keahey assumed were bite marks from the larger tiger she lived with. A trip to the veterinarian confirmed Aasha’s ringworm, and she was taken to an isolated enclosure at In-Sync Exotics.

“Every day, twice a day, I would go in and give Aasha medications and spend time with her,” Keahey said. “I knew I was going to have to handle her in order to get her well.” Aasha also received a special medicated bath daily, which she wasn’t exactly thrilled about – Keahey said she ran away, forcing Keahey to chase after her. But little did Aasha realize she’d soon become quite the swimmer.

“After eight weeks of treatments you could see little bits of fuzz growing back to [what once] bald spots,” Keahey said. 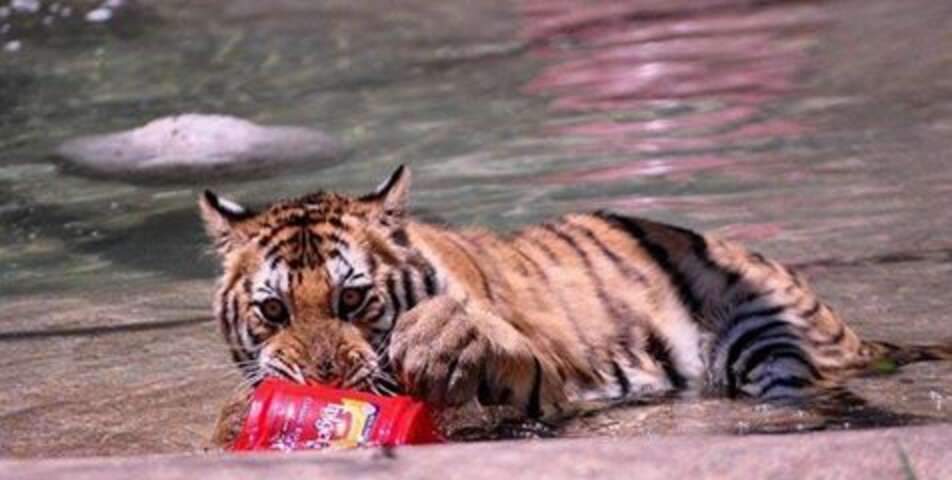 “By the time the treatments were over, Aasha loved the water so I put a small tub in [her enclosure] for her to splash in,” she said. 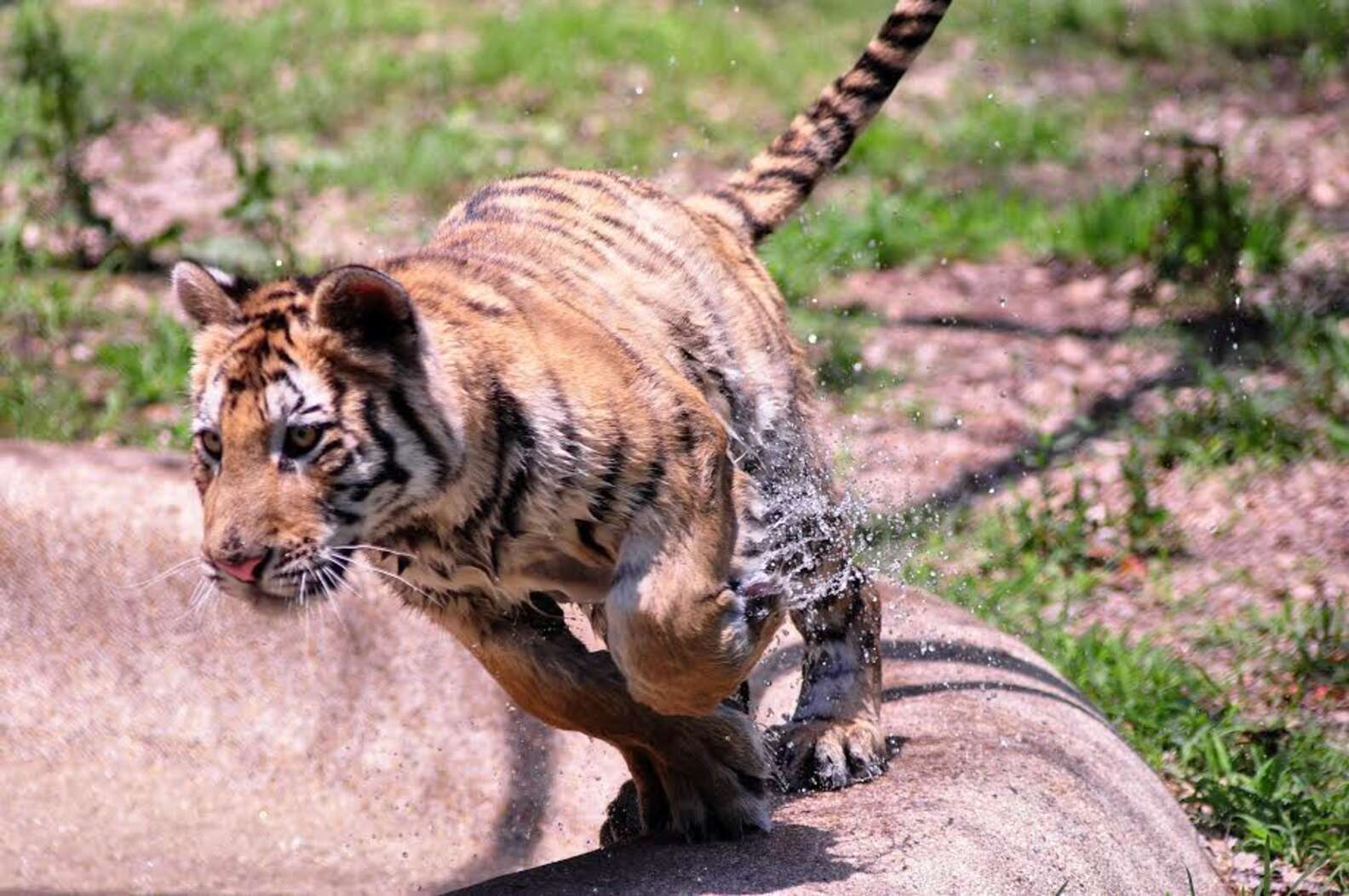 Under Keahey’s care, Aasha began to grow in size and, even though Keahey was unable to sit in Aasha’s enclosure with her now that she was bigger and healthier, she still loved to interact with the tigress through games like giving Aasha a good soaking with a hose. 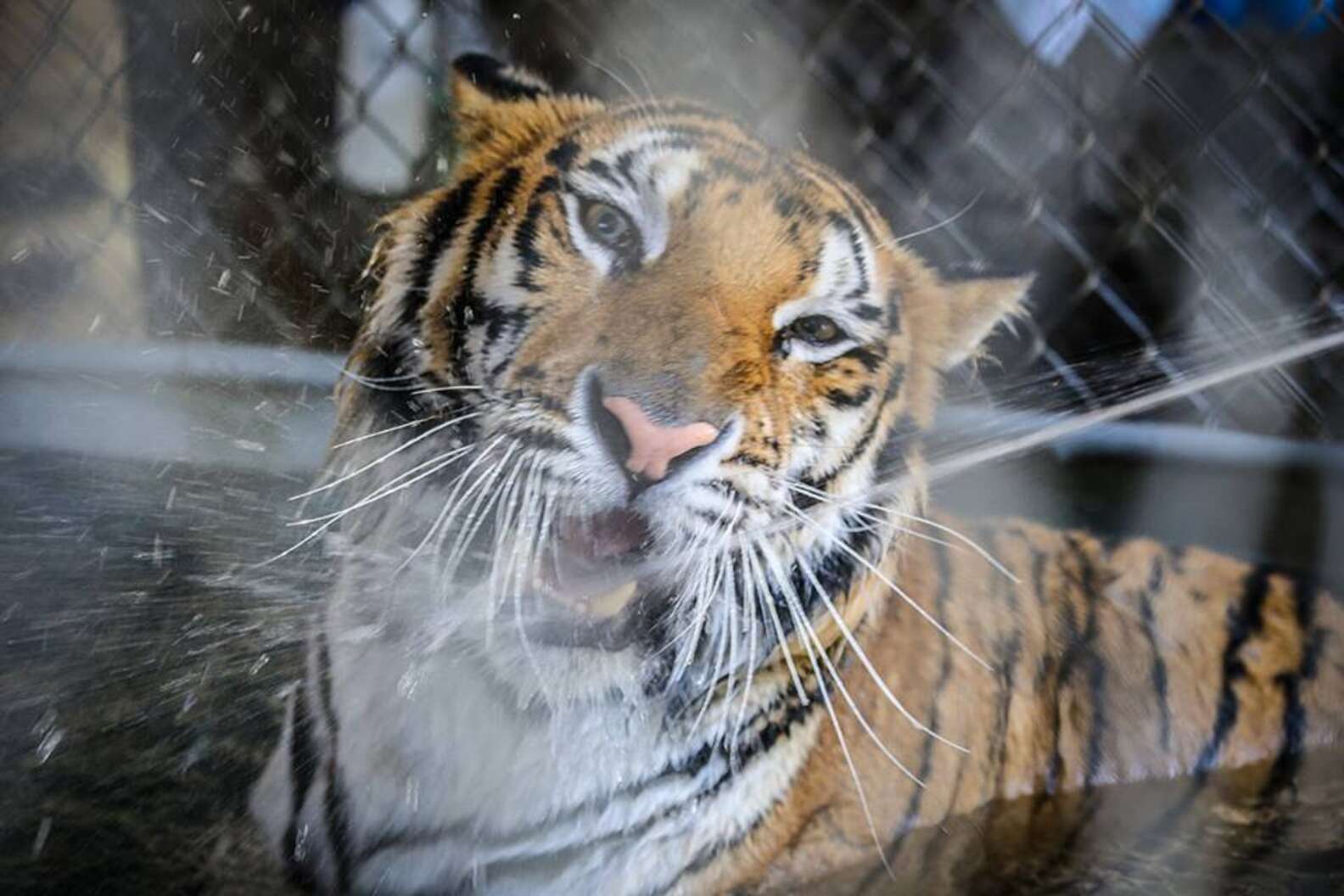 “Within eight months she looked like a real tiger, and it was time to see how she would react to other tigers,” Keahey said. 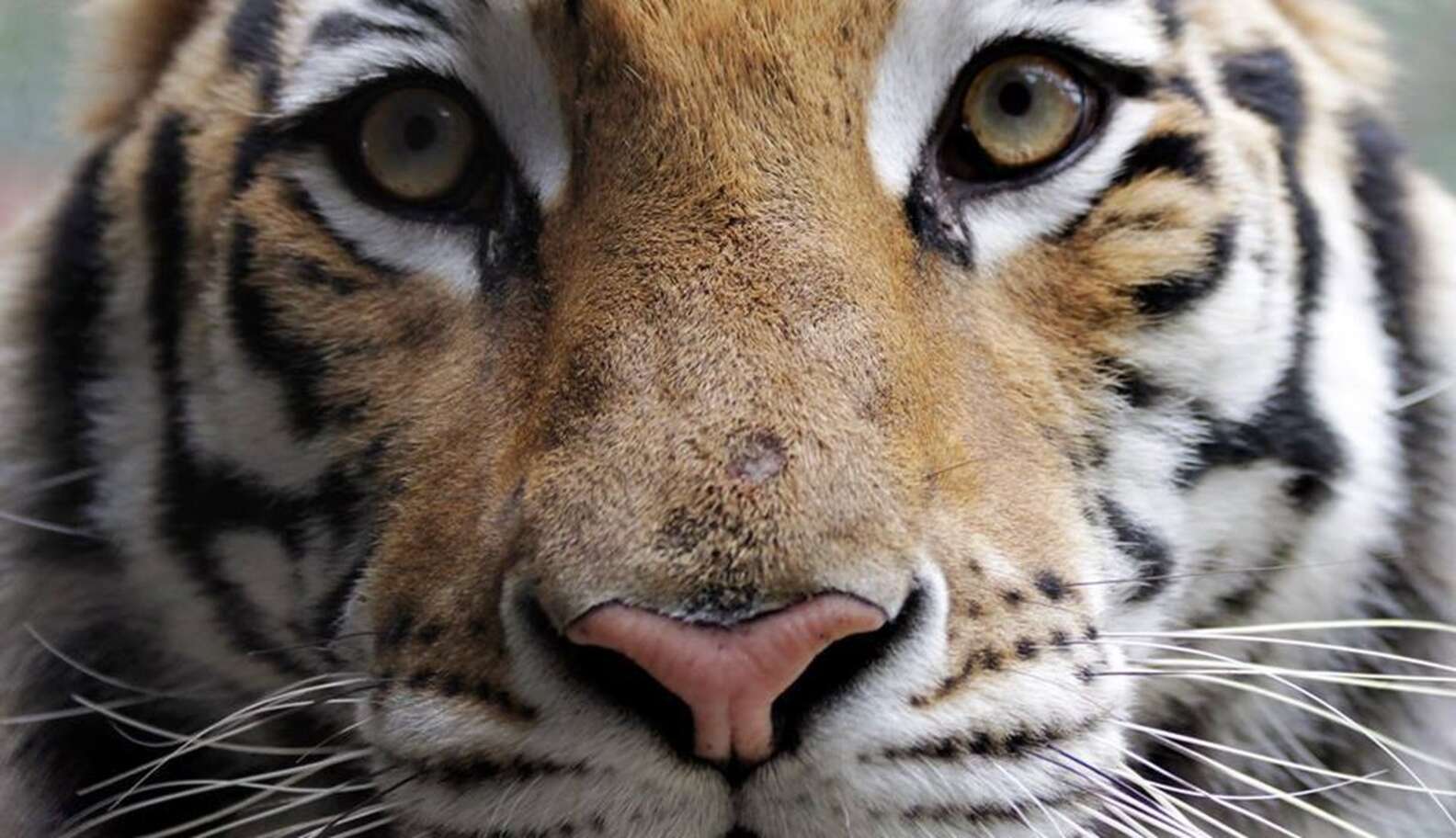 “We loaded her up and put her right next door to Smuggler. He went crazy for her and was always showing off for her,” she said. 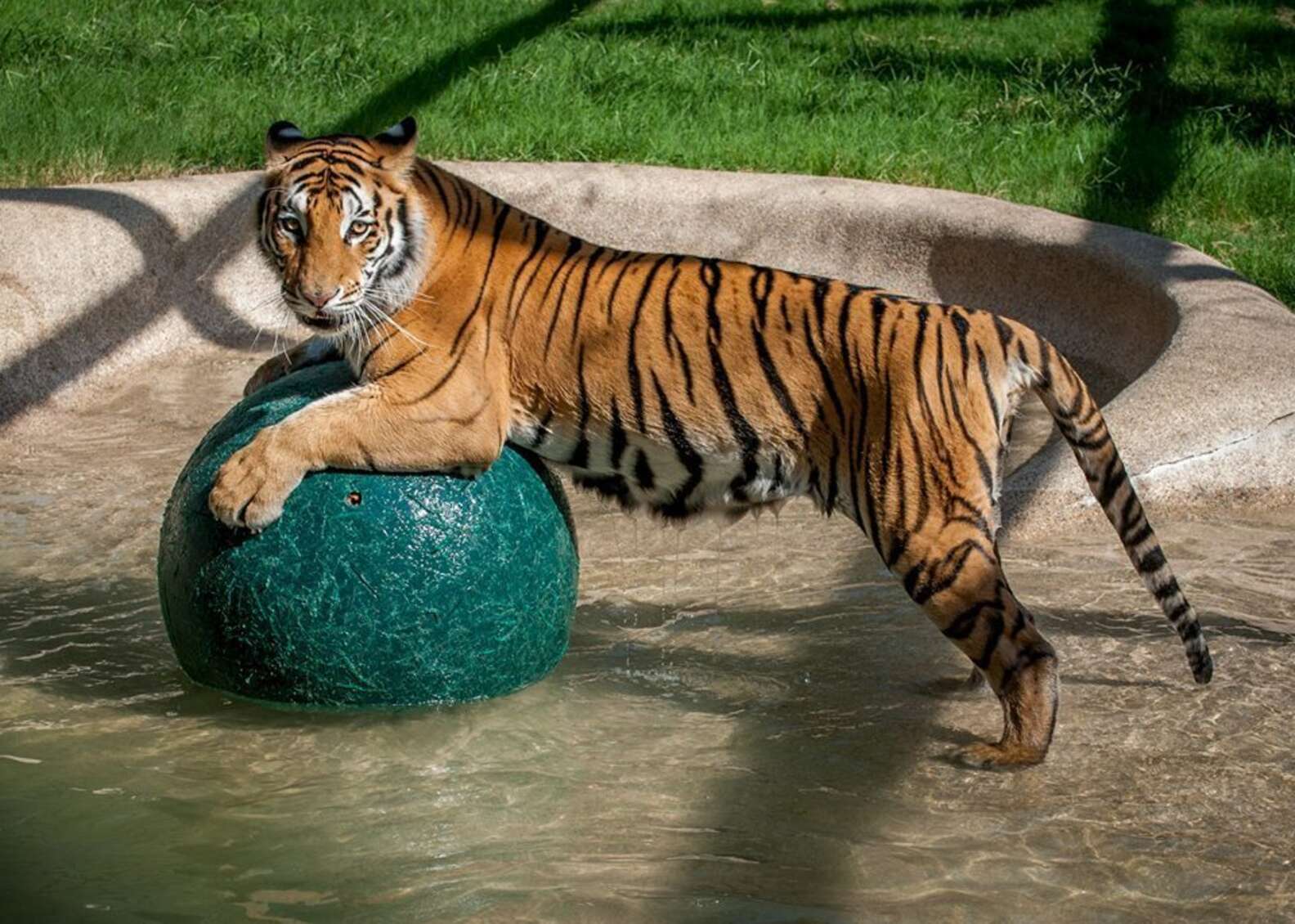 Despite the fact that Smuggler was three times Aasha’s size, Keahey sensed that there was an attraction between the two … 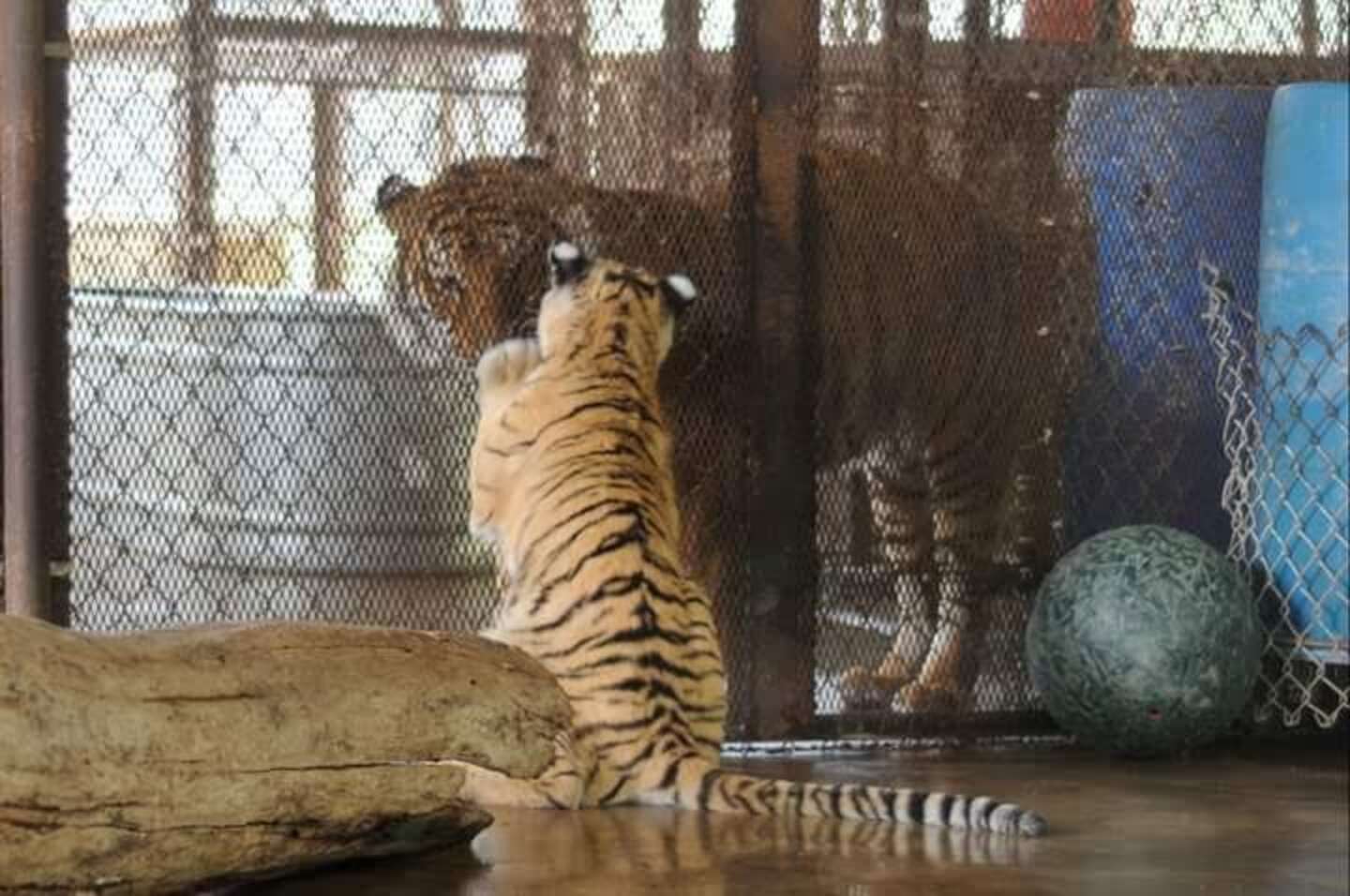 … and believed that Aasha would be able to handle herself with the male tiger, so the two underwent a dating process. 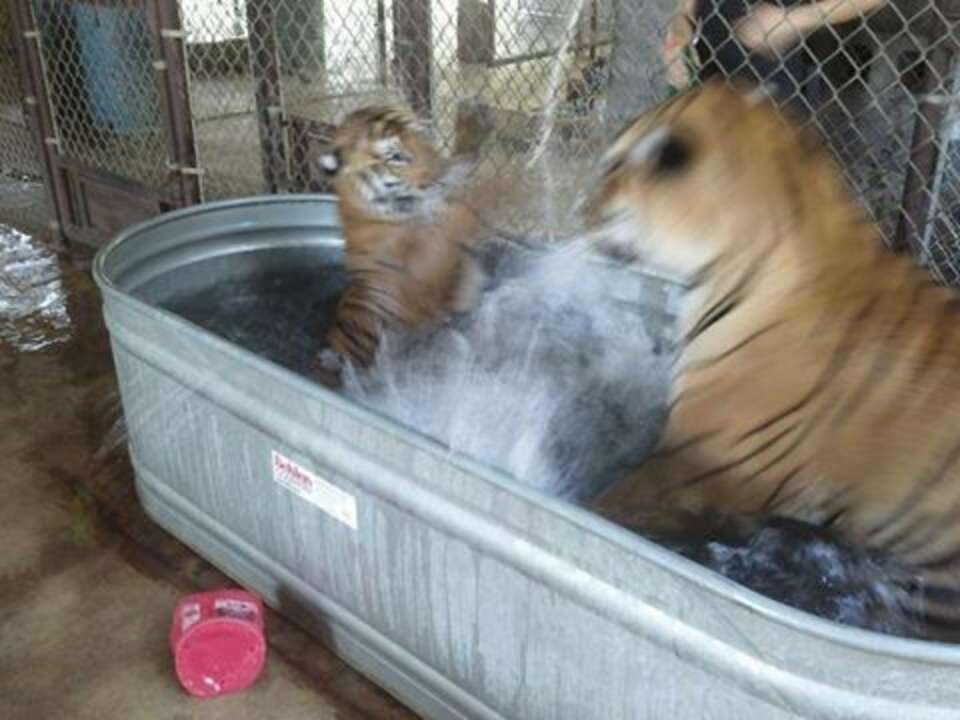 They got to know each other better through supervised playdates, until they were ready to move into the same enclosure together. 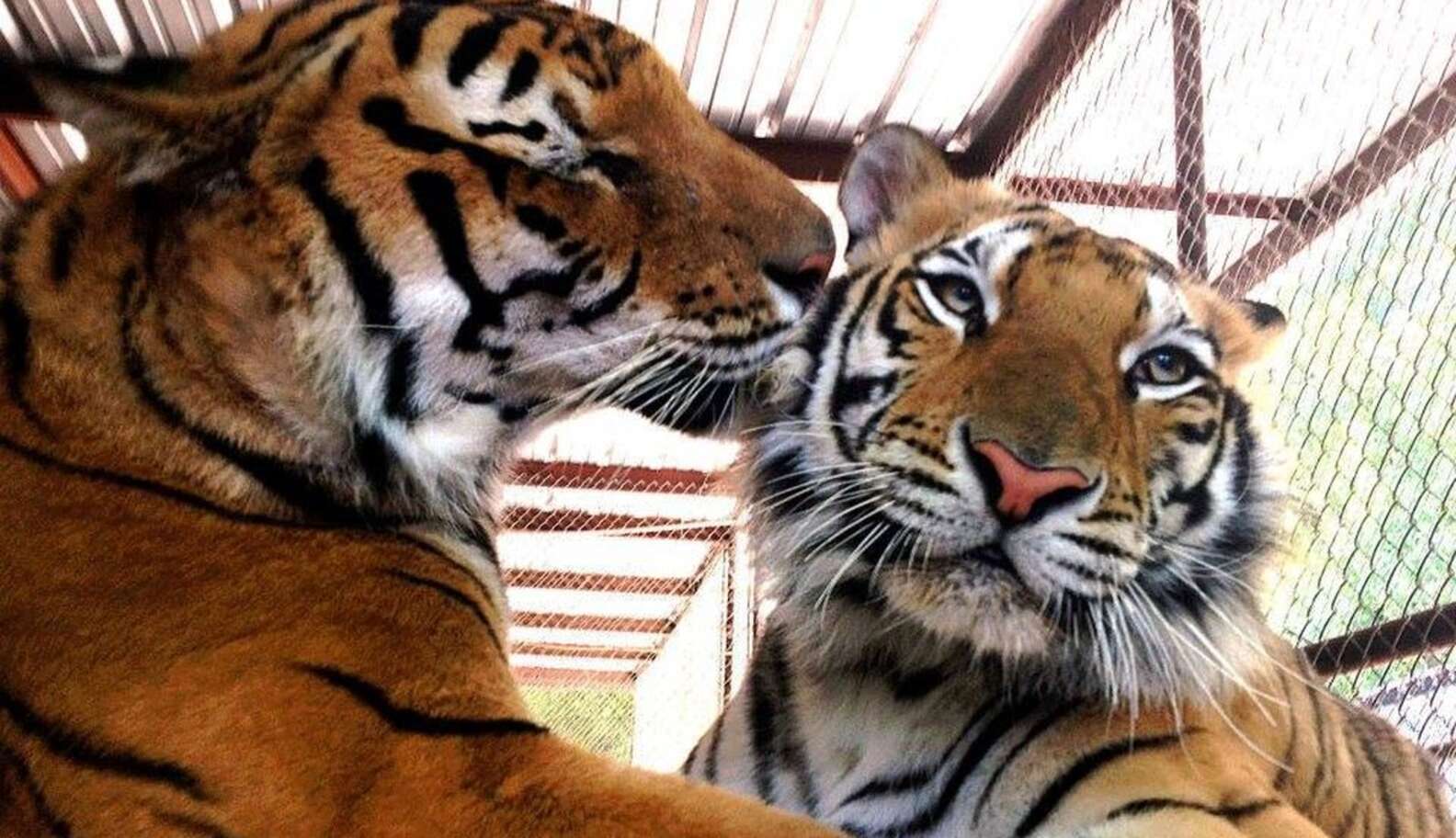 “That was about four years ago,” Keahey said. 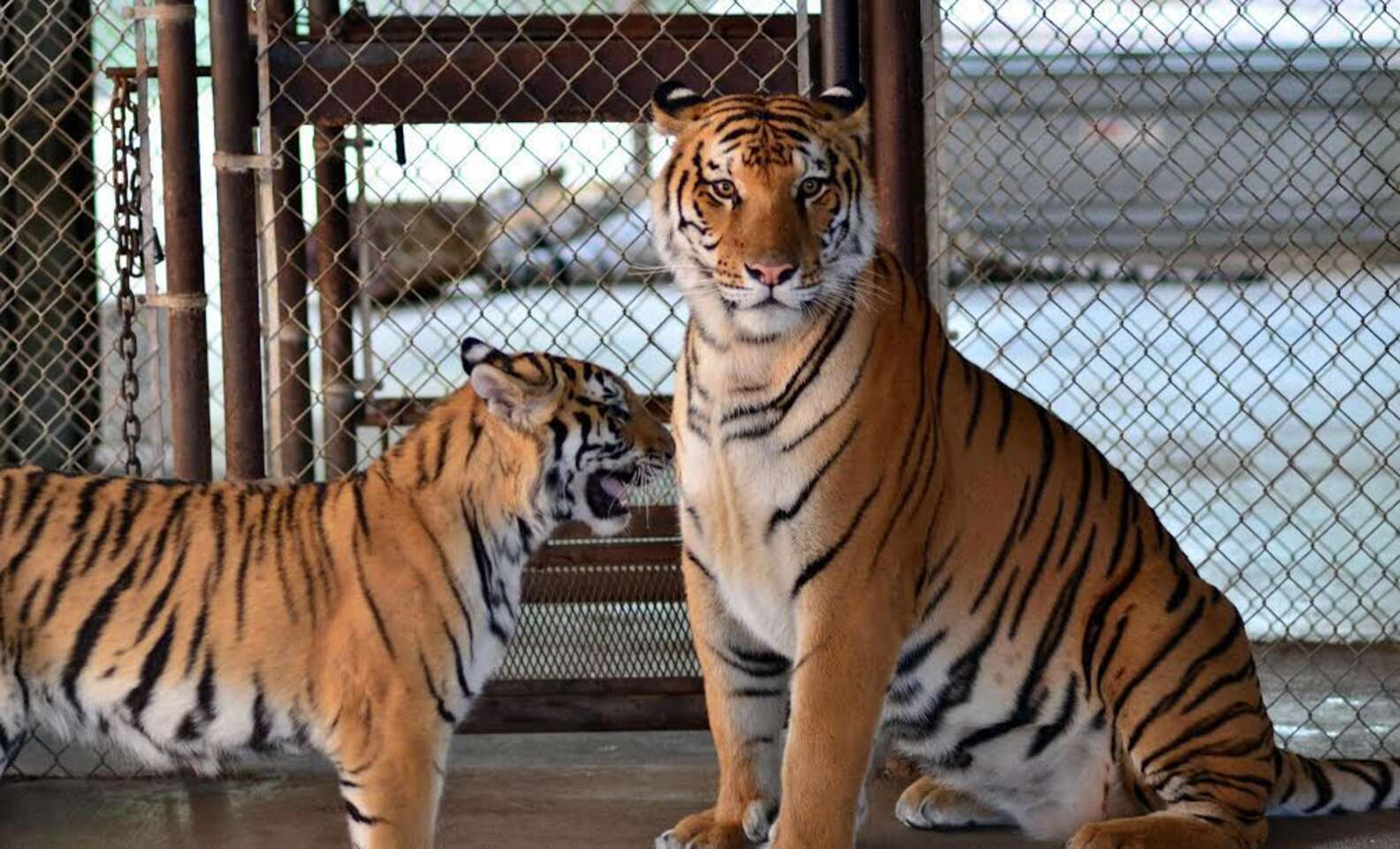 “Aasha is still about half Smuggler’s size, but he knows when to steer clear of her,” she continued. 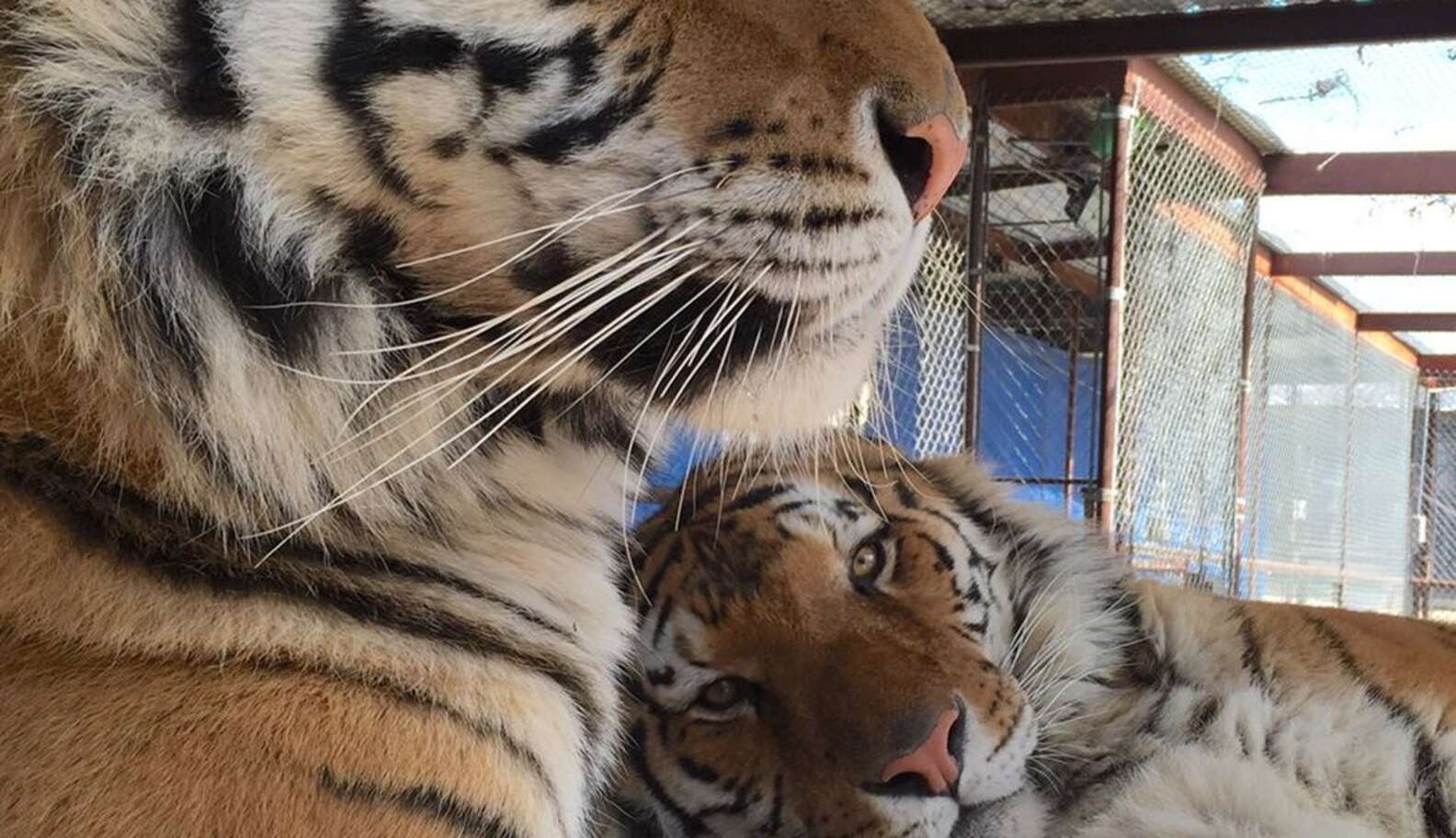 Aasha’s grown from a sickly tiger cub – a victim of mistreatment and neglect – to a playful, confident adult tiger with a love for the one thing she used to be scared of most … 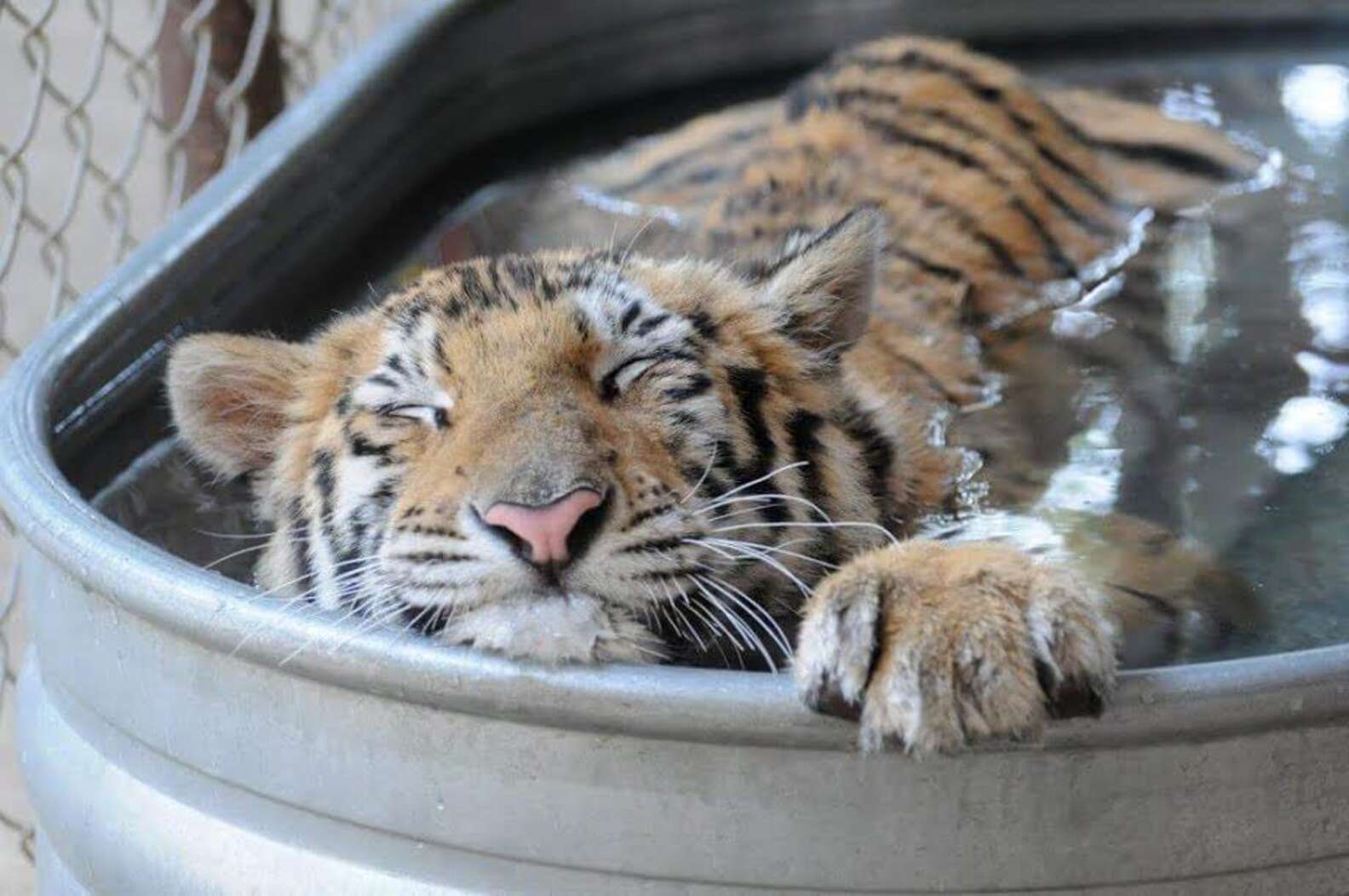 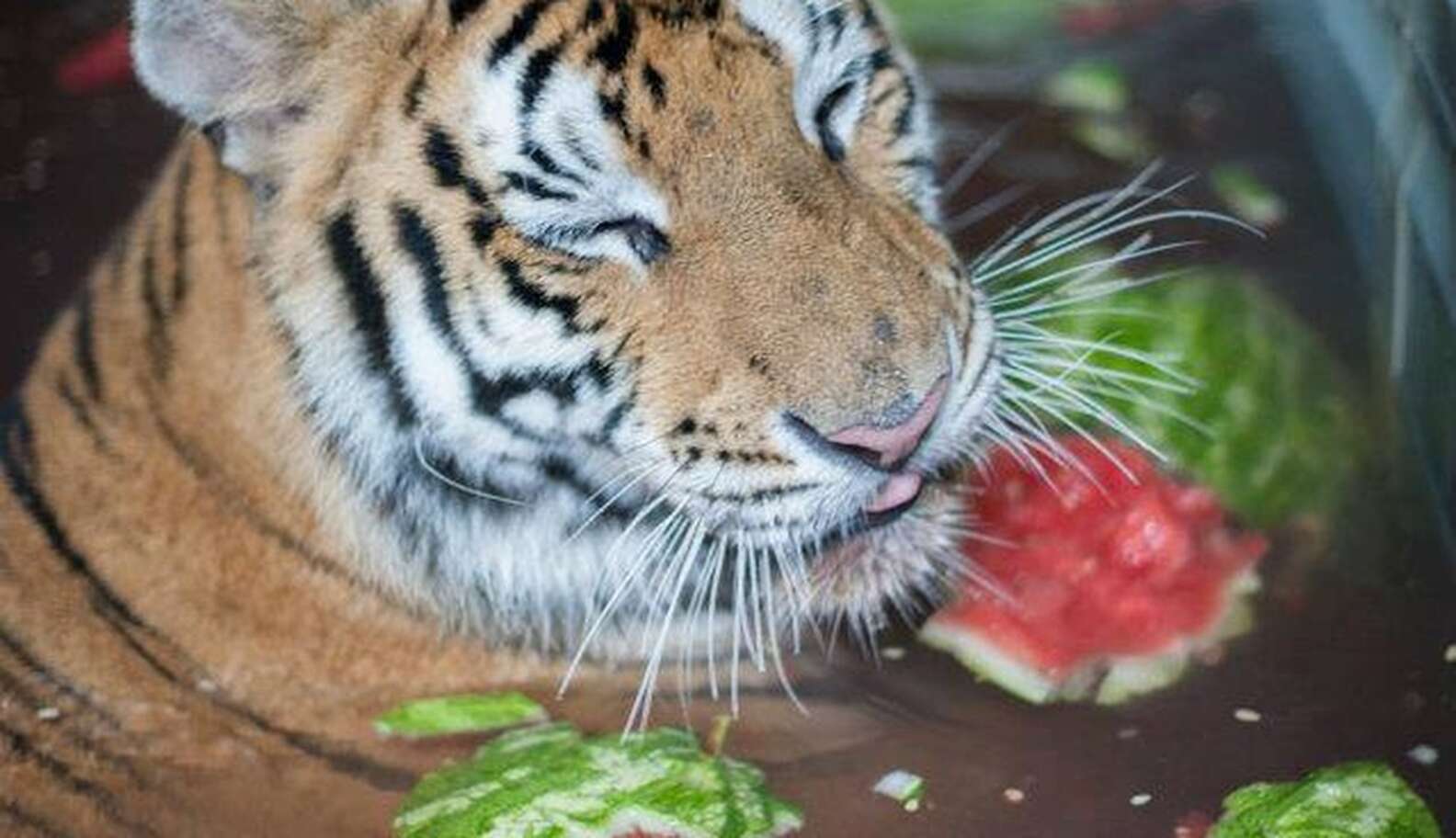 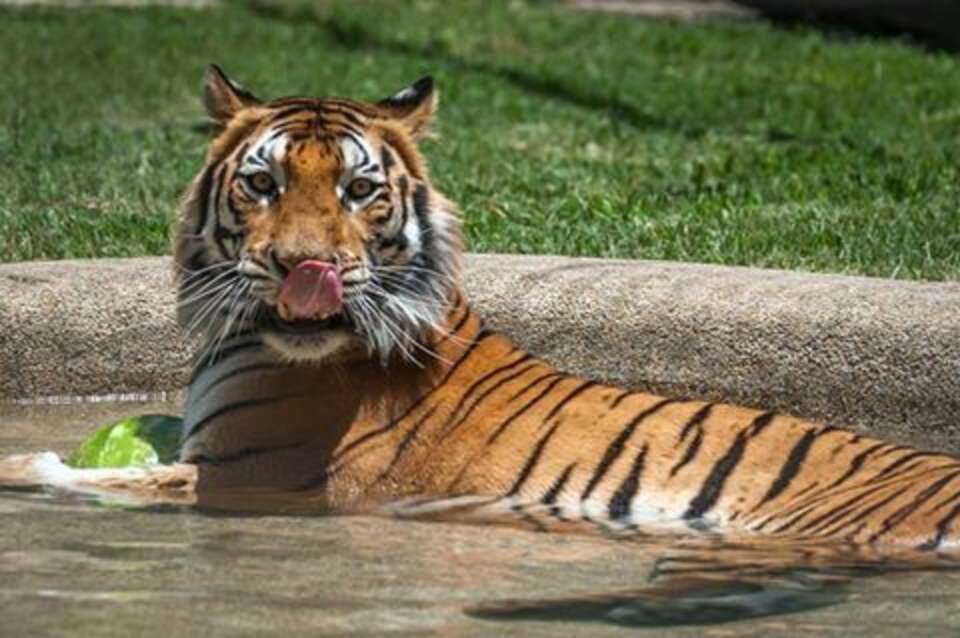 You can also “adopt” a big cat, like Aasha, here. 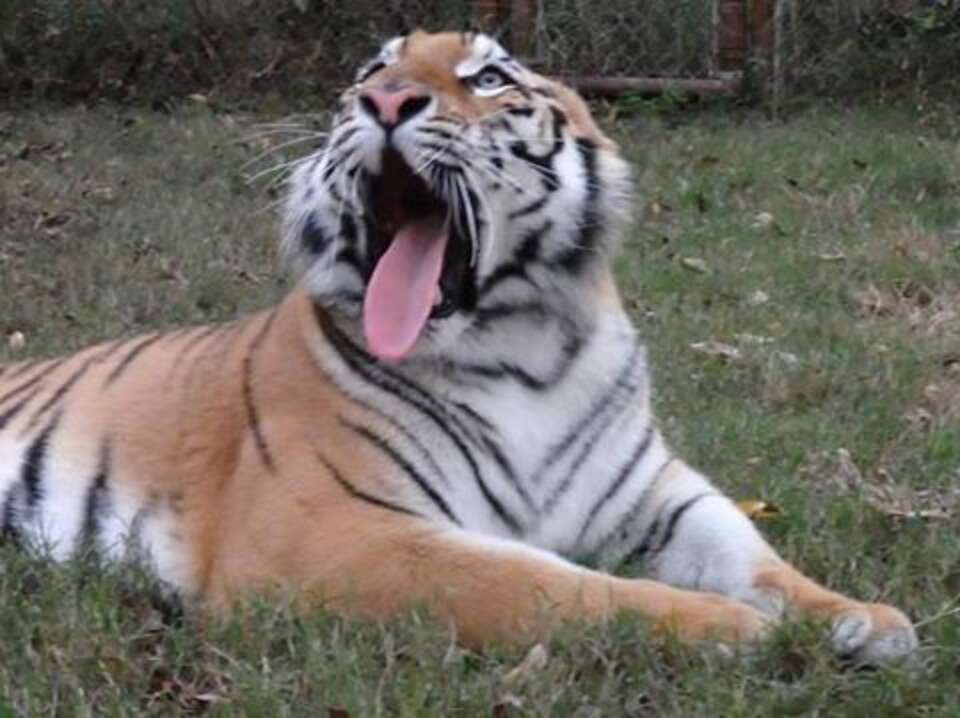 Watch this sweet clip of Aasha and Smuggler playing together back when they were first getting to know each other in 2011: