In the middle of a bustling market, two rescued dogs recognized each other from afar, leading to an accidental but heartwarming family reunion that is warming everyone’s hearts.

Kaitlyn Hawkins and her partner were walking through Pike Place Market in Seattle, WA, when all of a sudden her puppy, Maui, sprinted towards a strange dog.

The other dog was a Golden Retriever like Maui and looked to be around the same age. As soon as they approached, the other dog (named Juniper) became equally excited and their humans guessed something was up. 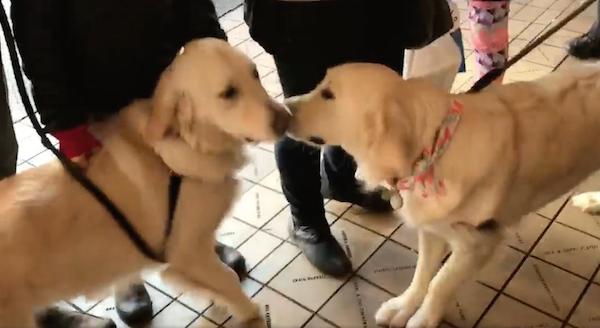 After talking with each other, the couples realized their adopted dogs were in fact siblings from Russia! The 11-month-old dogs are both from Russia and flown to Seattle-Tacoma International Airport last May as puppies to be adopted.

The pups rolled around and embraced each other in their random reunion, made all the more remarkable for having found each other in market, which sees 15 million visitors every year.

“I witnessed the coolest thing today,” she writes. “I was at my booth at Pike Place Market and two couples (who didn’t know each other) were walking towards each other with identical dogs. Suddenly, the dogs ran towards each other and went totally crazy.” 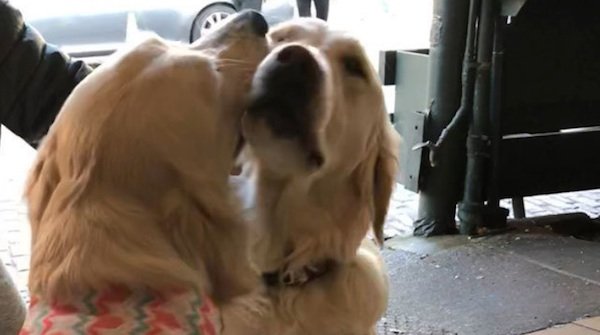 “I went over to watch because it was so adorable, and as I stood there soaking up the love, the couples figured out that the dogs are siblings and came over on the same plane to be adopted from Russia a year ago!

“The dogs recognized each other! They even had identifying tattoos that confirmed it.” 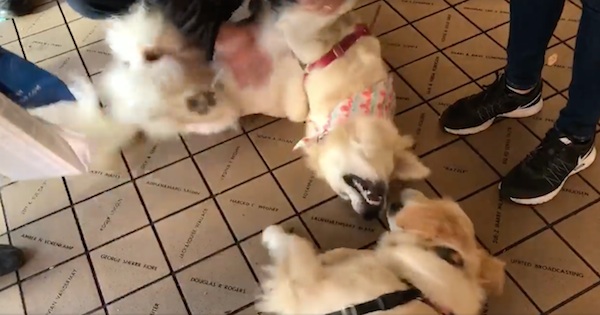 “This joyful reunion went on for over a half an hour, in fact they were still at it when I left the market. (I heard the couples exchanging phone numbers, so now they can have play dates, which made me very happy.)”