Employees at San Diego’s oceanfront Marine Room restaurant got a surprise guest when they discovered a malnourished sea lion curled up on one of their booths.

Staff aren’t exactly sure how the 8-month-old California sea lion got in, but the fancy fish restaurant’s executive chef, Bernard Guillas, said the starving sea lion might have snuck in through the back door. The restaurant called Sea World to come and help the pup.

SeaWorld San Diego Rescue Team arrived to take the poor pup back to their facility for medical care and rehabilitation. She was dehydrated and weighs about half of what she should weigh at her age. High tides, violent storms, and El Niño are causing the young California sea lions to seek higher,drier ground. The marine animals are finding it difficult to find food because of the warmer ocean temperatures and are becoming dehydrated and emaciated as result. When they become dehydrated they seek out food and a warm, dry place because they get too cold in the water. 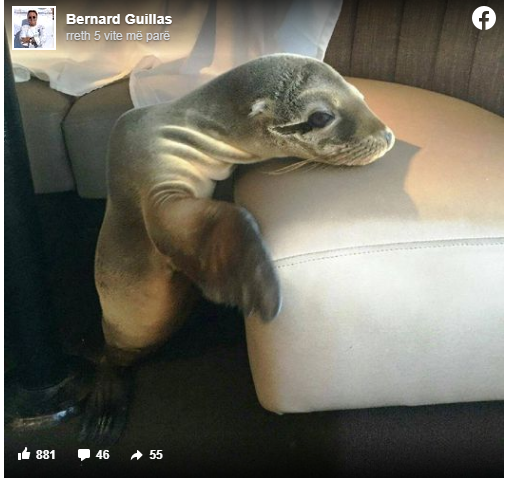 The pup is one of 40 sea lions rescued by SeaWorld so far this year. Marine mammal rescue officials expect a record number of sea lion rescues in the upcoming year because of El Niño’s warming waters effect on animals’ food supply.

Sea World said they are “cautiously optimistic” about the pup’s recovery.