No one can say for certain how this pup named Lucky ended up stranded in the middle of a busy Florida roadway last Wednesday night — but it was clear from his condition that he’s well-acquainted with hardship. His body was encased in a shocking mass of matted fur, hinting that his had been the saddest past.

But thanks to rescuers, both are now behind him. 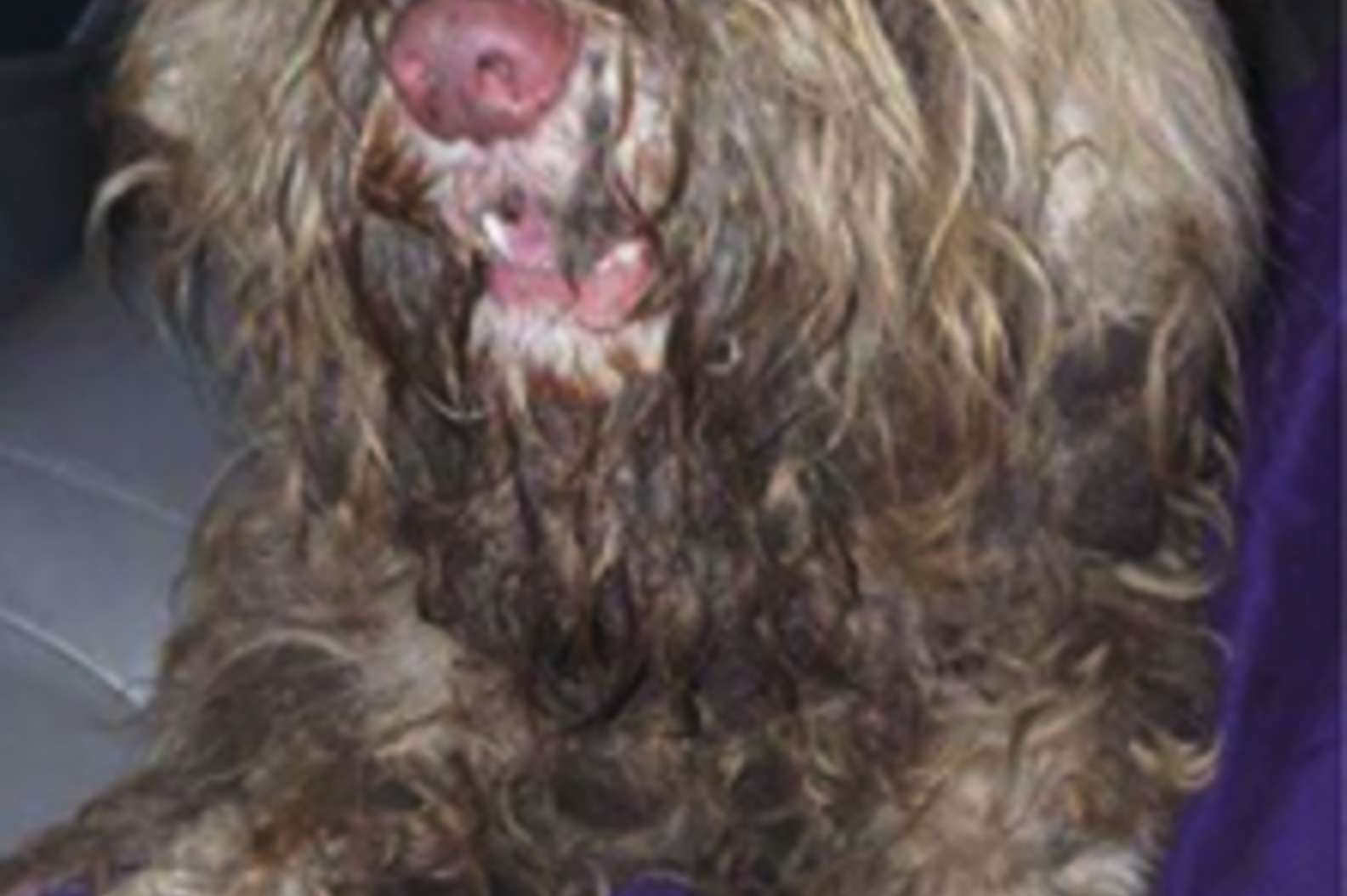 Kari Falla owns and operates BGE Grooming, a salon for pets in Seminole County. When she’s not servicing her clients’ dogs, Falla donates her time giving rescue animals some much-needed makeovers as a way of helping them attract potential adopters. So, when she read on Facebook that a Good Samaritan had found and saved Lucky from the road a short time earlier in that deplorable condition, Falla knew she had to help — even though that meant returning to work in the middle of the night.

“As soon as I saw the post I knew the dog needed help IMMEDIATELY,” Falla told The Dodo. “I contacted the finder of the dog and I told them to meet me at my salon at midnight that very night and I would groom him for free.” 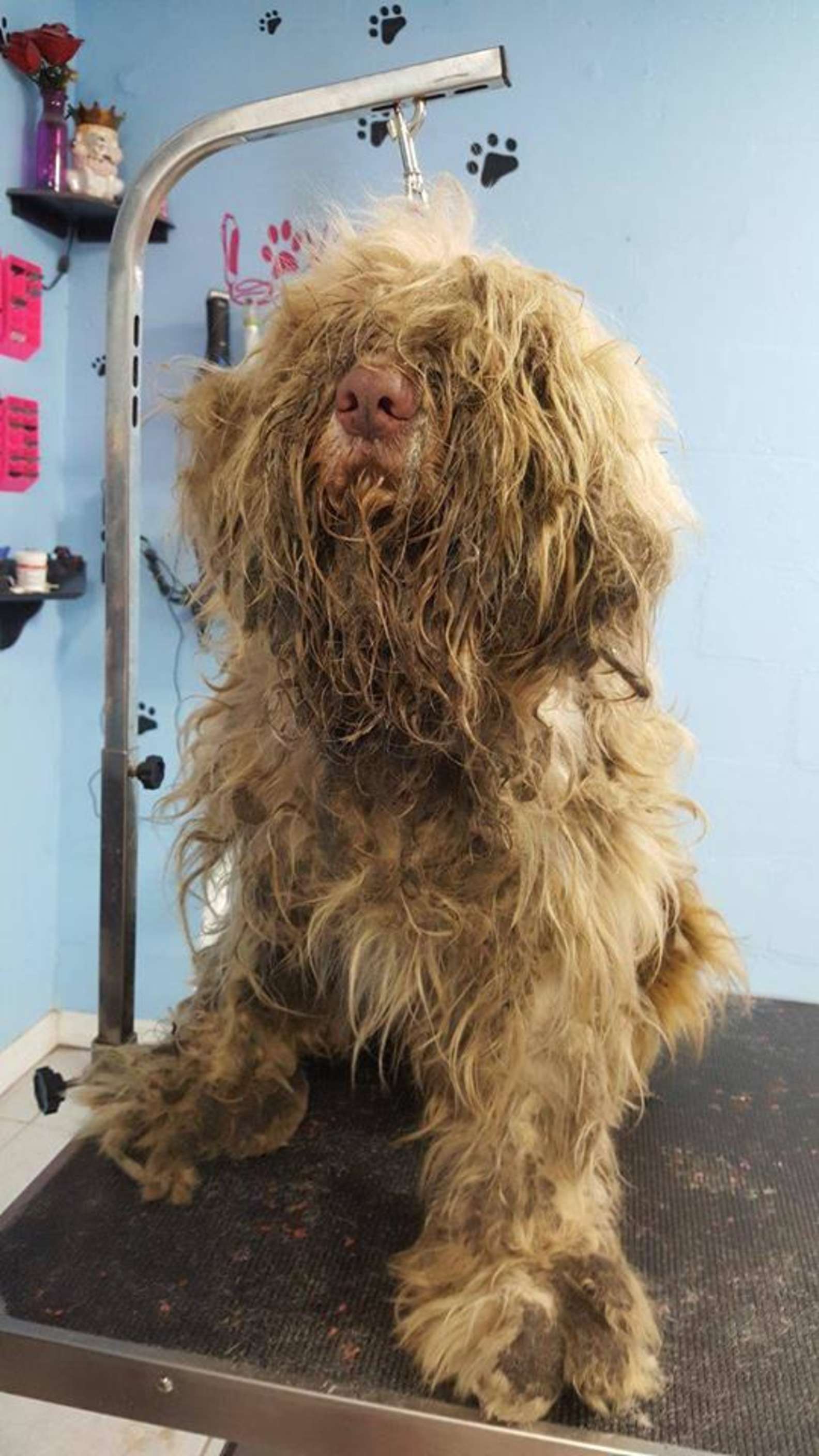 For Falla, who’s no stranger to rundown-looking dogs, Lucky’s case was beyond bad.

“It was seriously the most disturbing situation I’ve ever seen in my life,” she said. “He smelled like death. He could not walk. He could not poop. His whole body was like a mummified cast. He was infested with fleas. He had a very long leash that looked like an outside leash embedded in his skin from the mats.”

Still, she refused to call his situation hopeless. 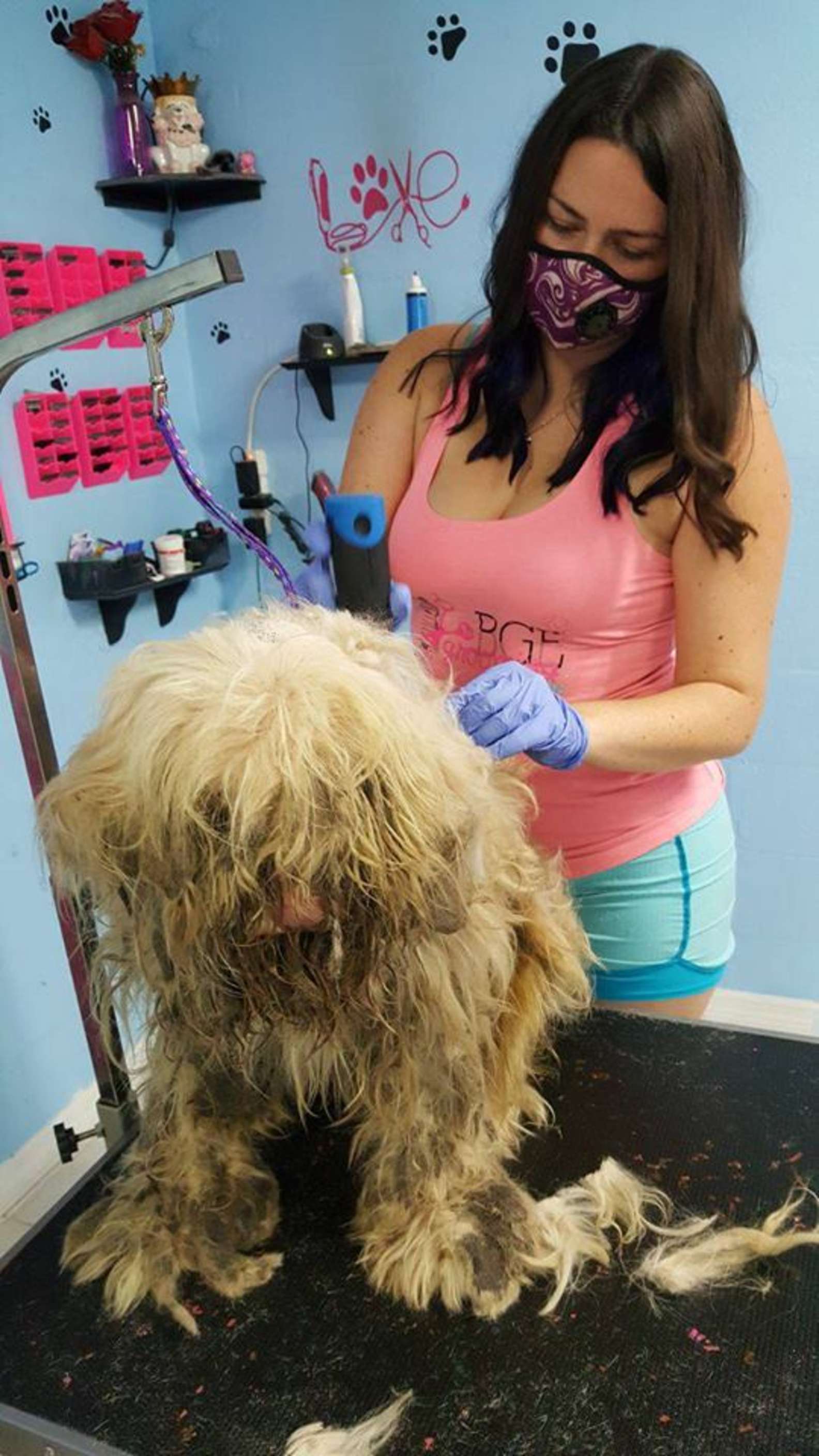 Over the next three hours, Falla carefully began freeing Lucky from his matted prison. 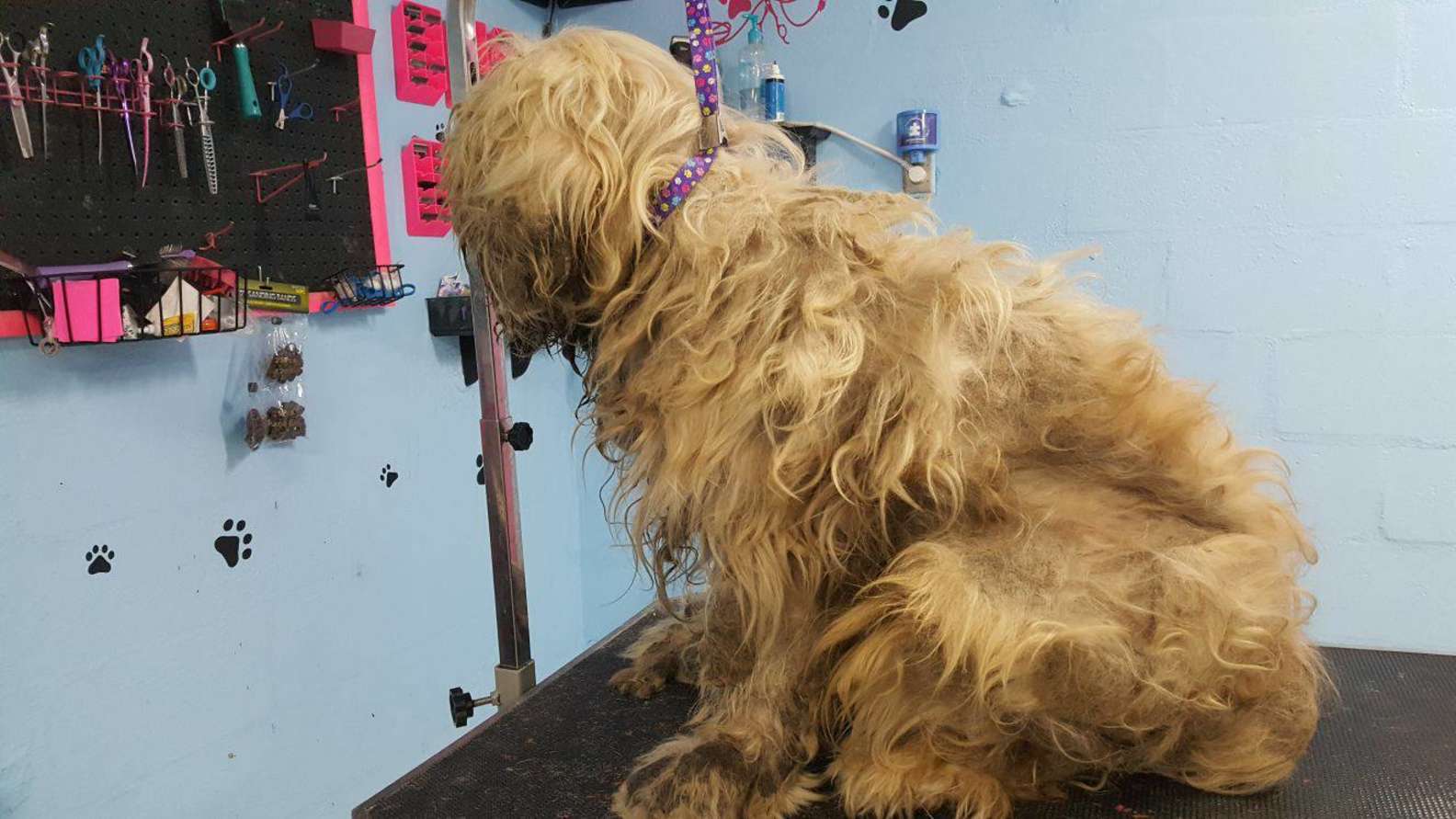 Slowly but surely, the dog’s true self began to reemerge. 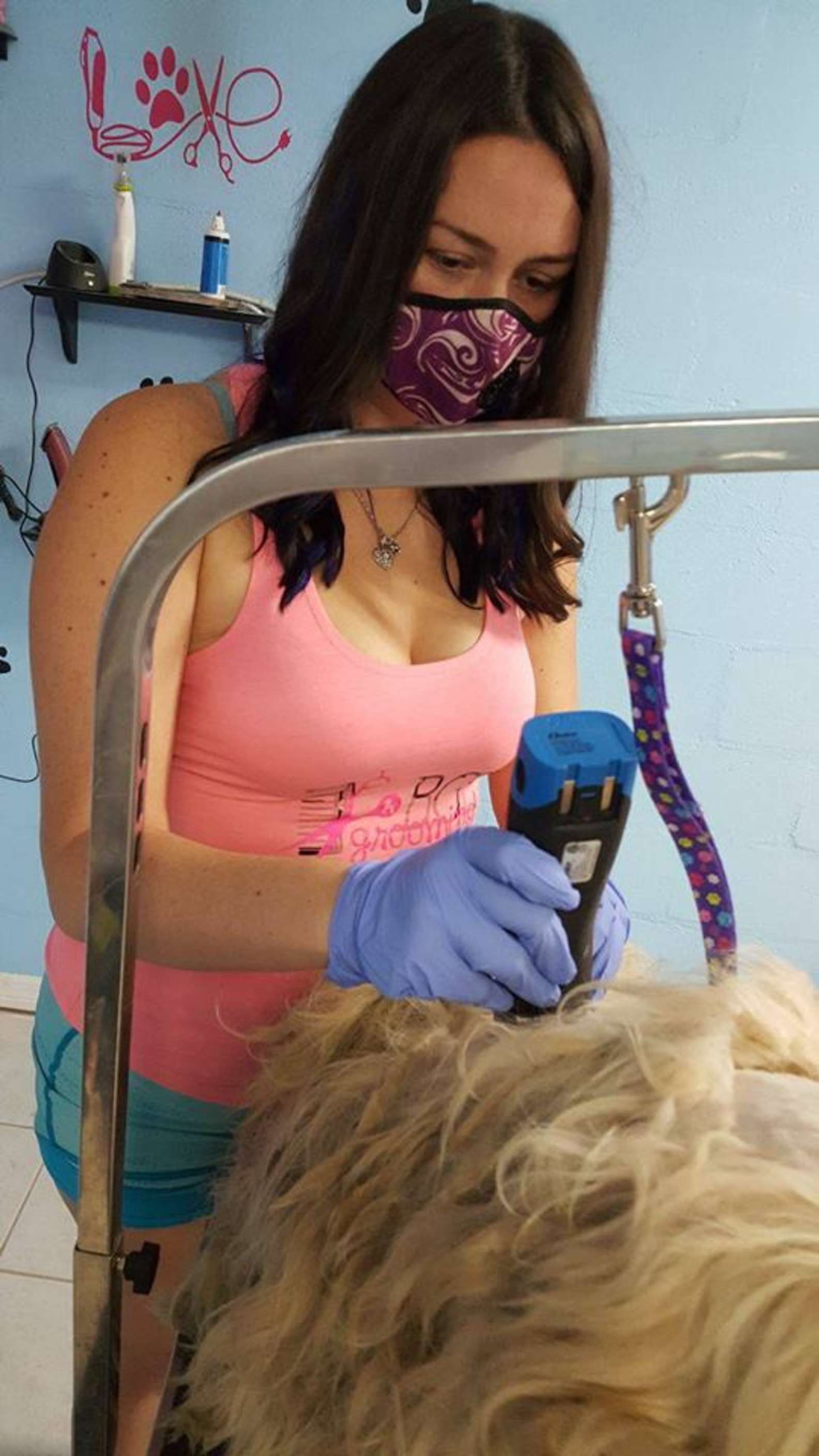 It was 3 a.m. by the time the grooming was complete — a long, arduous process that the dog accepted without complaint.

“He was so thankful and happy we groomed him,” Falla said. “It’s like he knew we were helping him.”

This is the fur Lucky left behind. 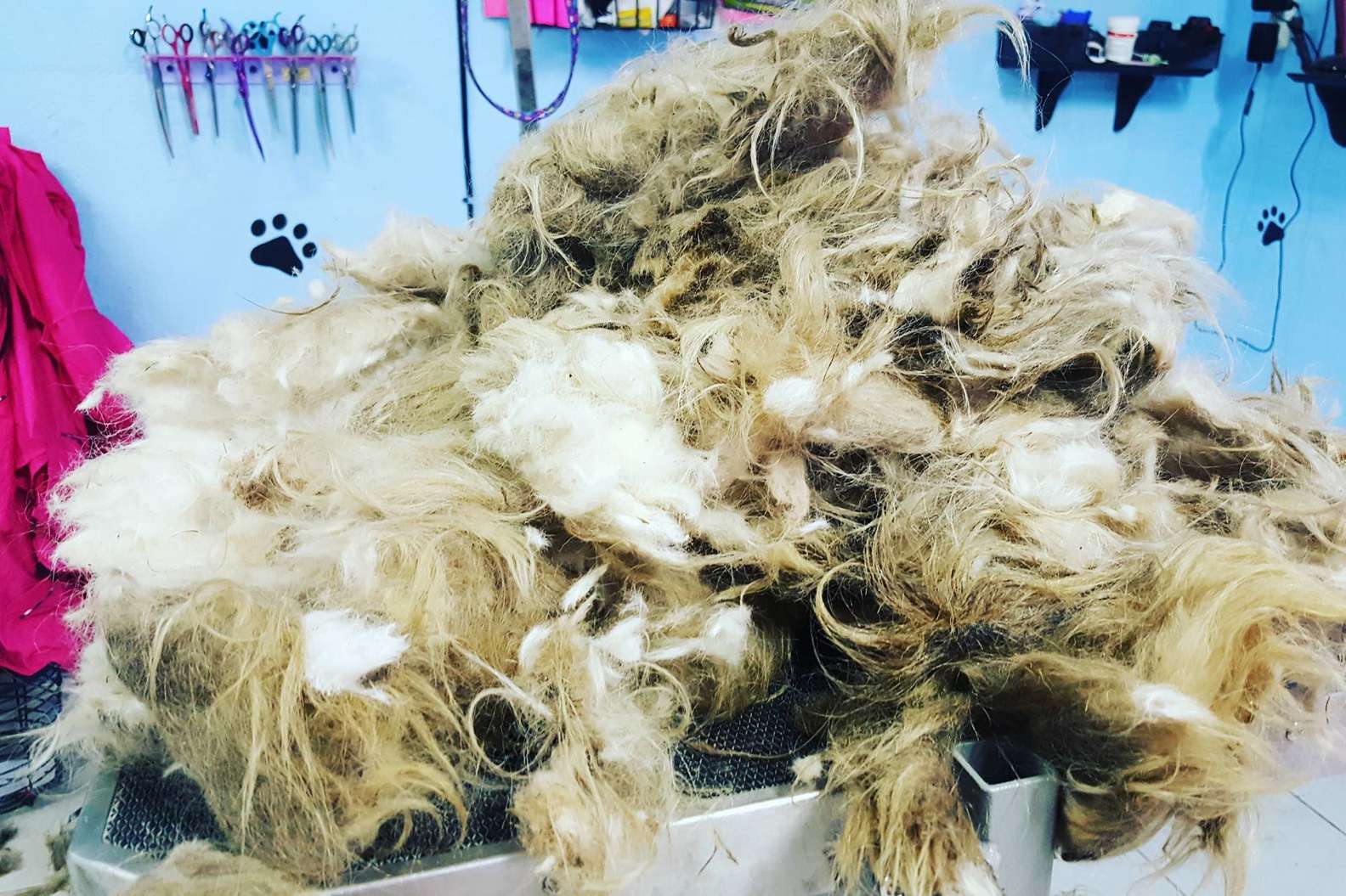 And here’s how he looked when it was all said and done. 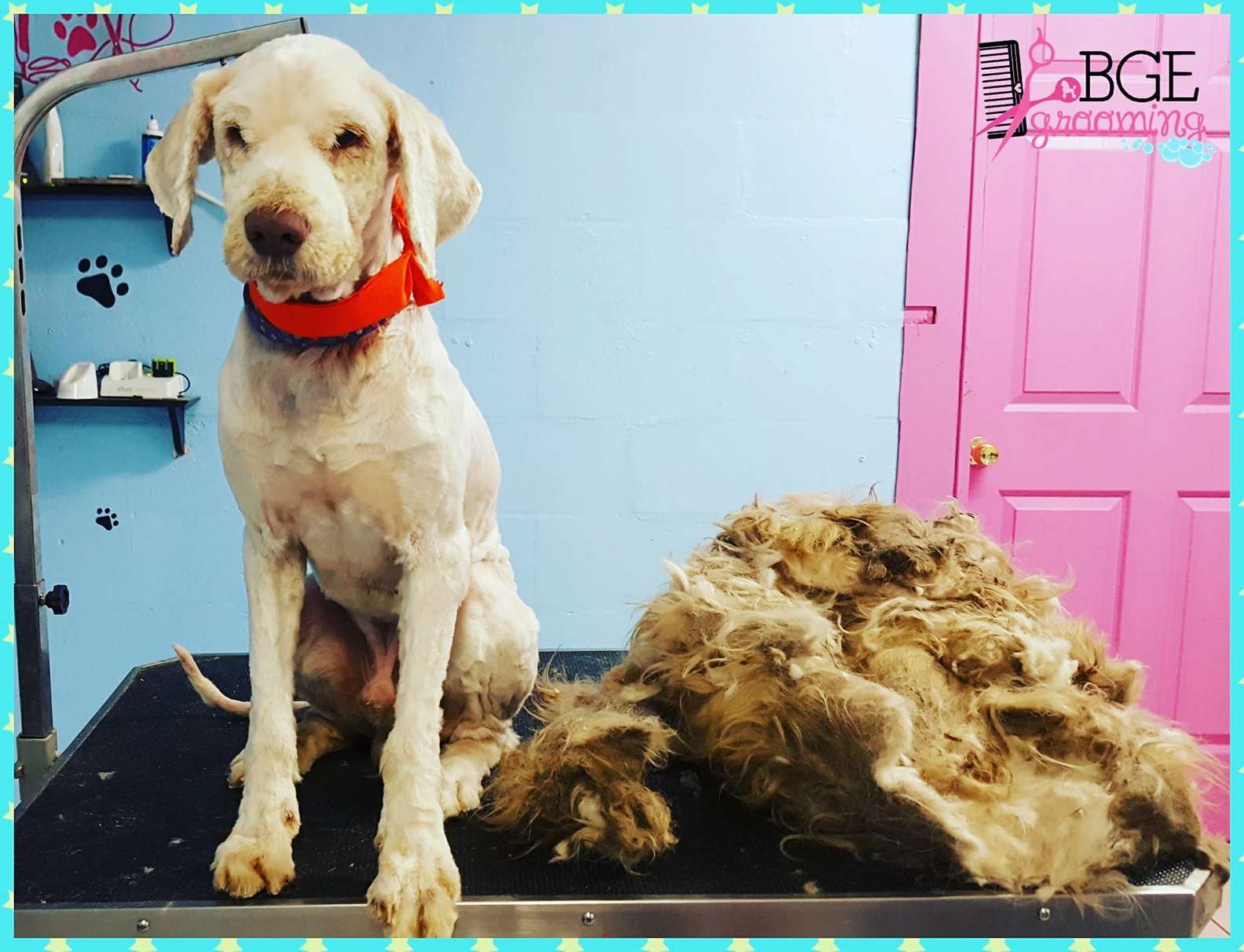 Afterward, Lucky was given a bath — perhaps the first in his life. 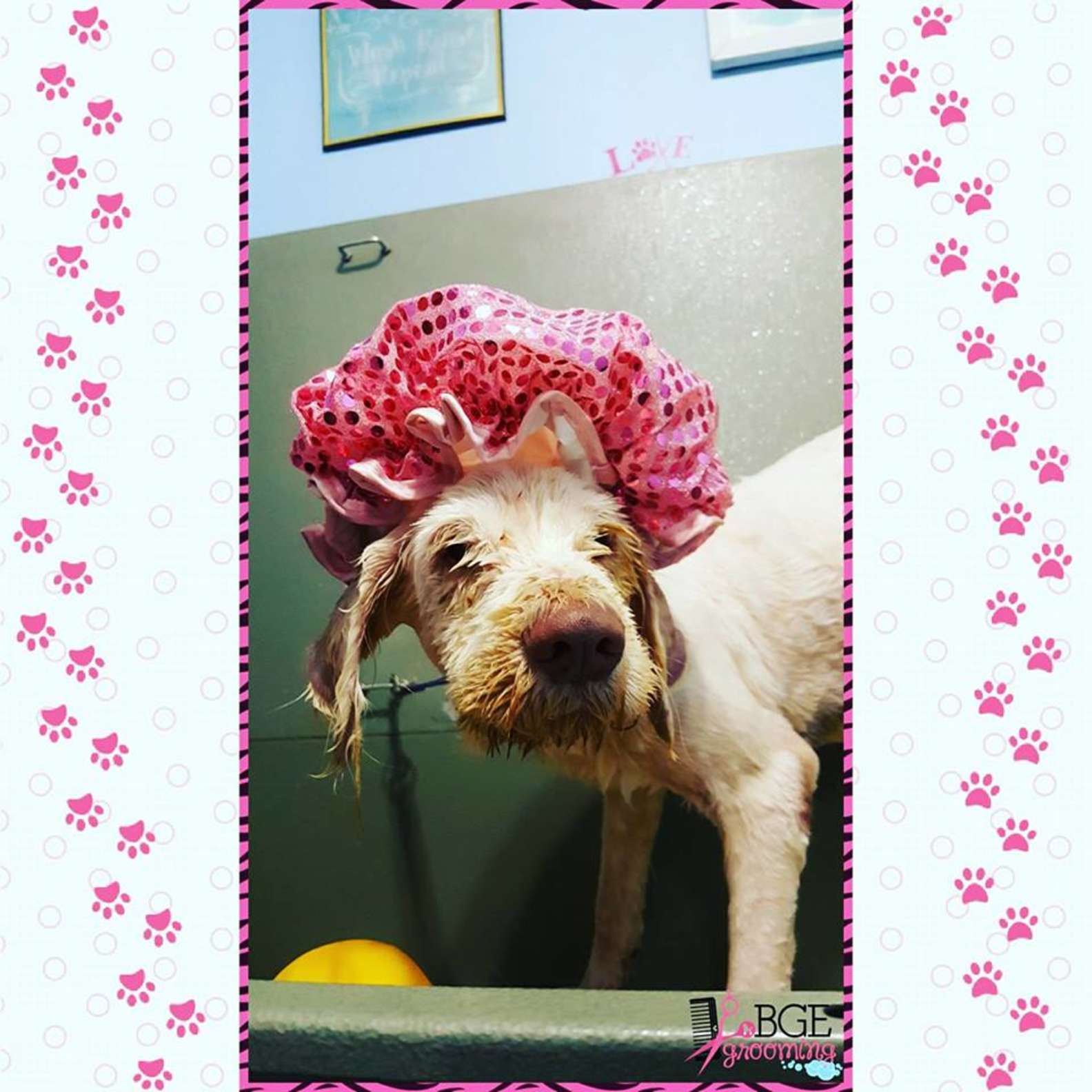 Lucky was then taken to a vet, who determined that he is blind and deaf. He had no microchip to track down his owner — but despite all that, he is now in good hands. 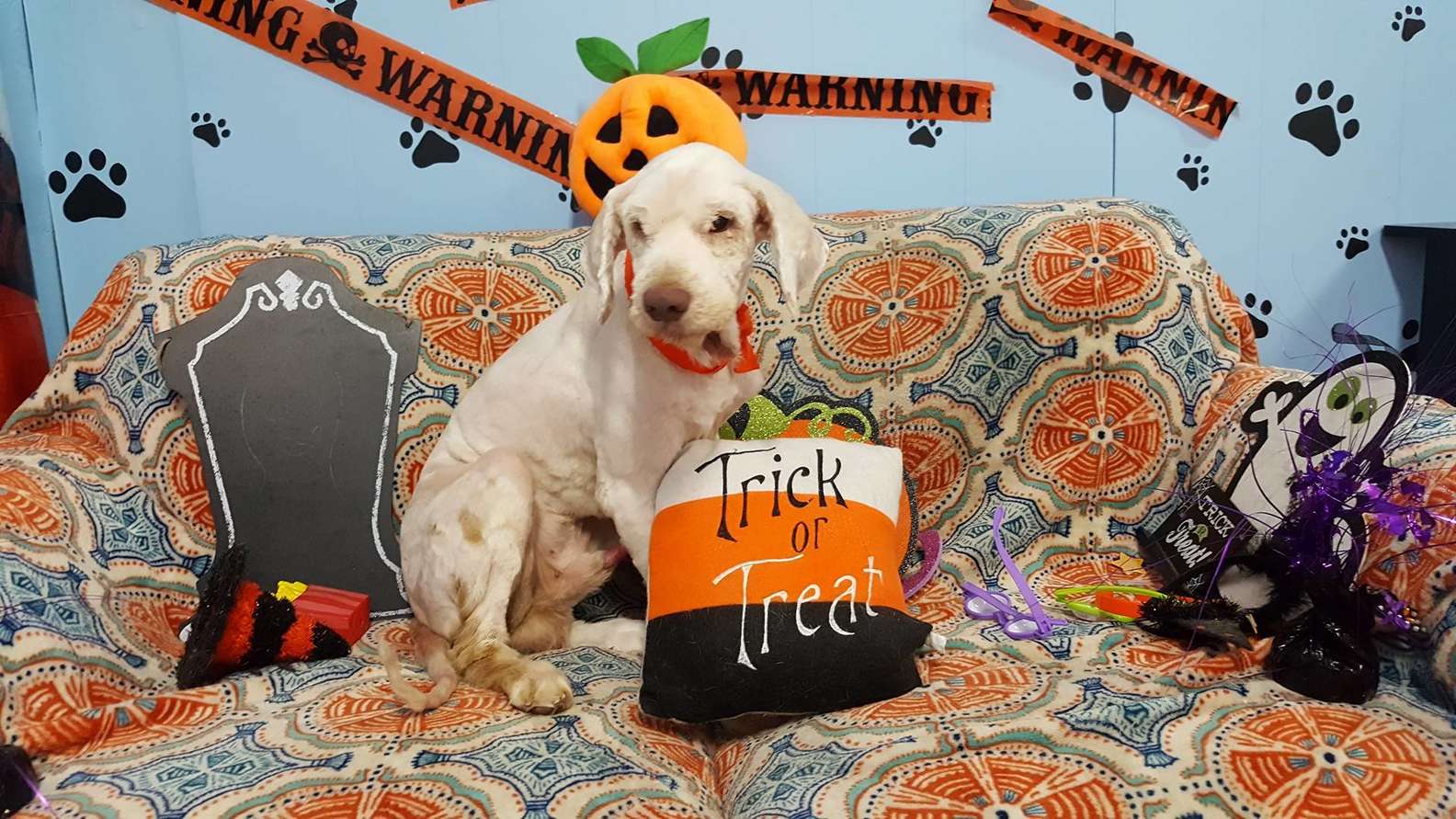 It’s only been a few days now since Lucky was first rescued, but his life is infinitely better than it had been before. A foster family has taken him to show him how a dog should be treated, and he’s already begun to blossom.

“Lucky is thriving in his foster home and doing great!” Falla said. “He is getting better every day.”

When the time is right, Lucky will be made available for adoption to a loving forever home — to begin his life anew as a cherished pet. 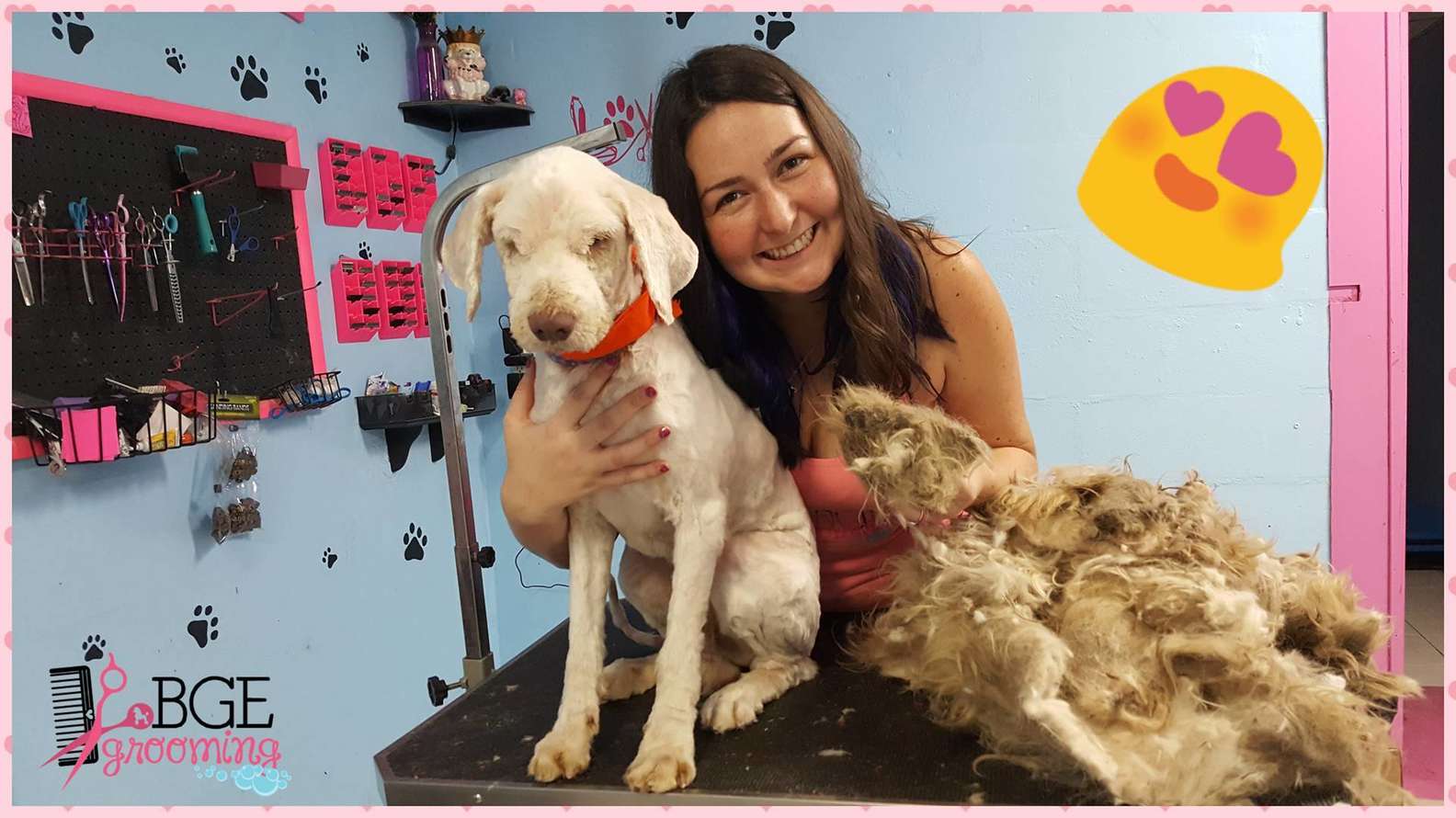 Seeing that remarkable transformation, both physical and emotional, in a dog like Lucky is what makes Falla’s work worthwhile:

“We love animals so much and feel extremely passionate about helping others in need. We groom all rescue and shelter dogs for free and don’t even think twice about it,” she said. “Our salon motto is a little kindness can go a long way, and in this case, it saved a life. There is nothing more rewarding than seeing a dog wag its tail in happiness after being groomed. A haircut can make ALL the difference in the world. The dog that once came in, sad, depressed, matted, long neglected nails, dirty ears, leaves our salon, jumping up and down, tail wagging, feeling happy and confident about themselves.”

And Lucky is no exception.