In 2009, Sophia Hanson let her two large dogs, Laila and her brother Blake, out into the yard.

When she checked on them a little while later, the dogs had vanished. “We still aren’t sure if they were stolen because there was no open door — there was nothing,” Hanson told The Dodo. “They were both just gone.” 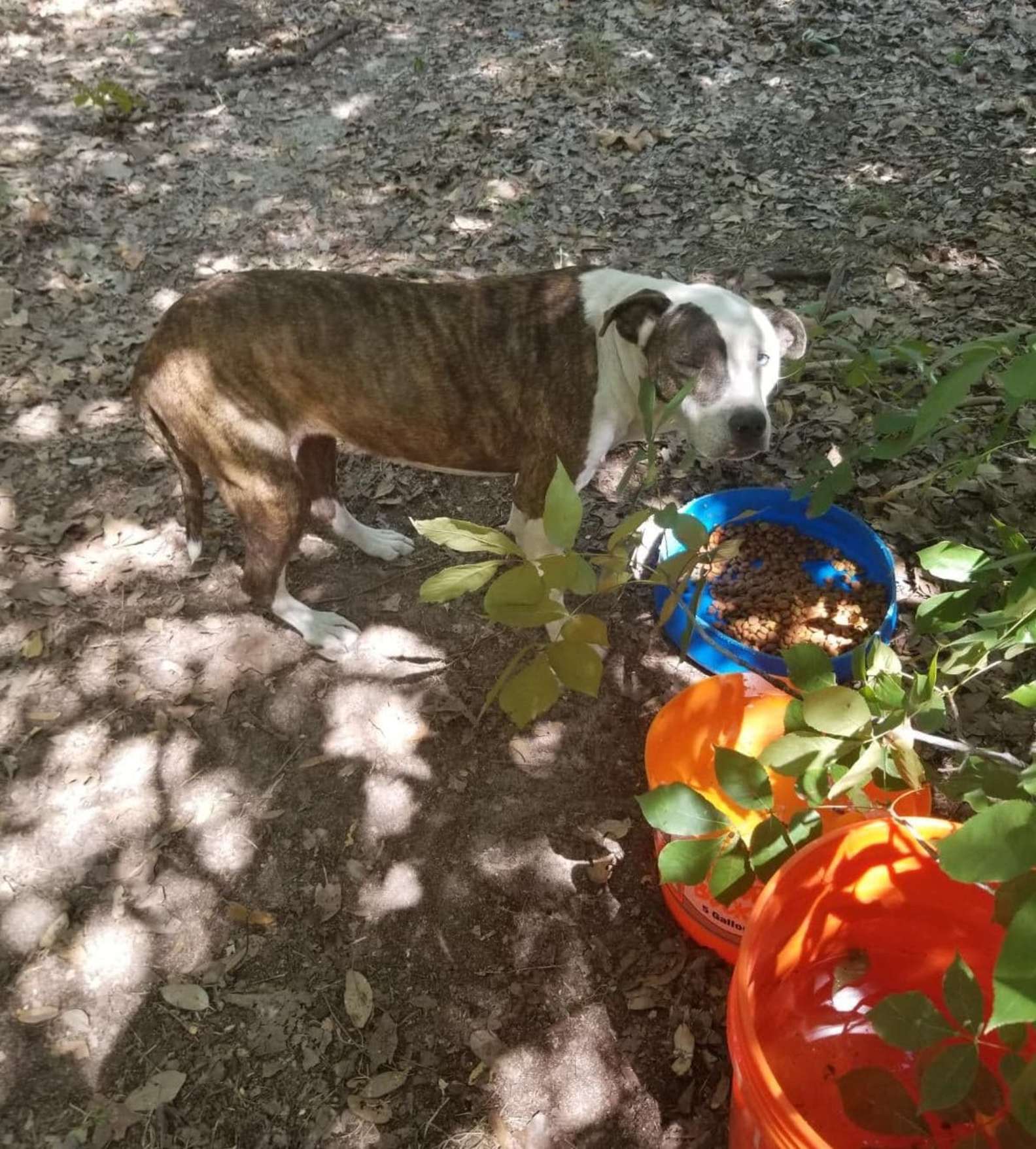 After a year of searching, Hanson and her husband came across a post on Craigslist. Someone not far from their neighborhood in San Antonio, Texas, was selling a pit bull for $500 who looked suspiciously like Blake.

“We went in pretending like, ‘Oh, we’re just going to buy a dog.’ We had our money ready,” Hanson said. “When we went back there and confirmed it was him, they had him on the biggest chain that I’d ever seen.”

“He was pretty messed up for a while,” Hanson added. “That whole rehabilitation was a process, but now he’s the biggest teddy bear.” 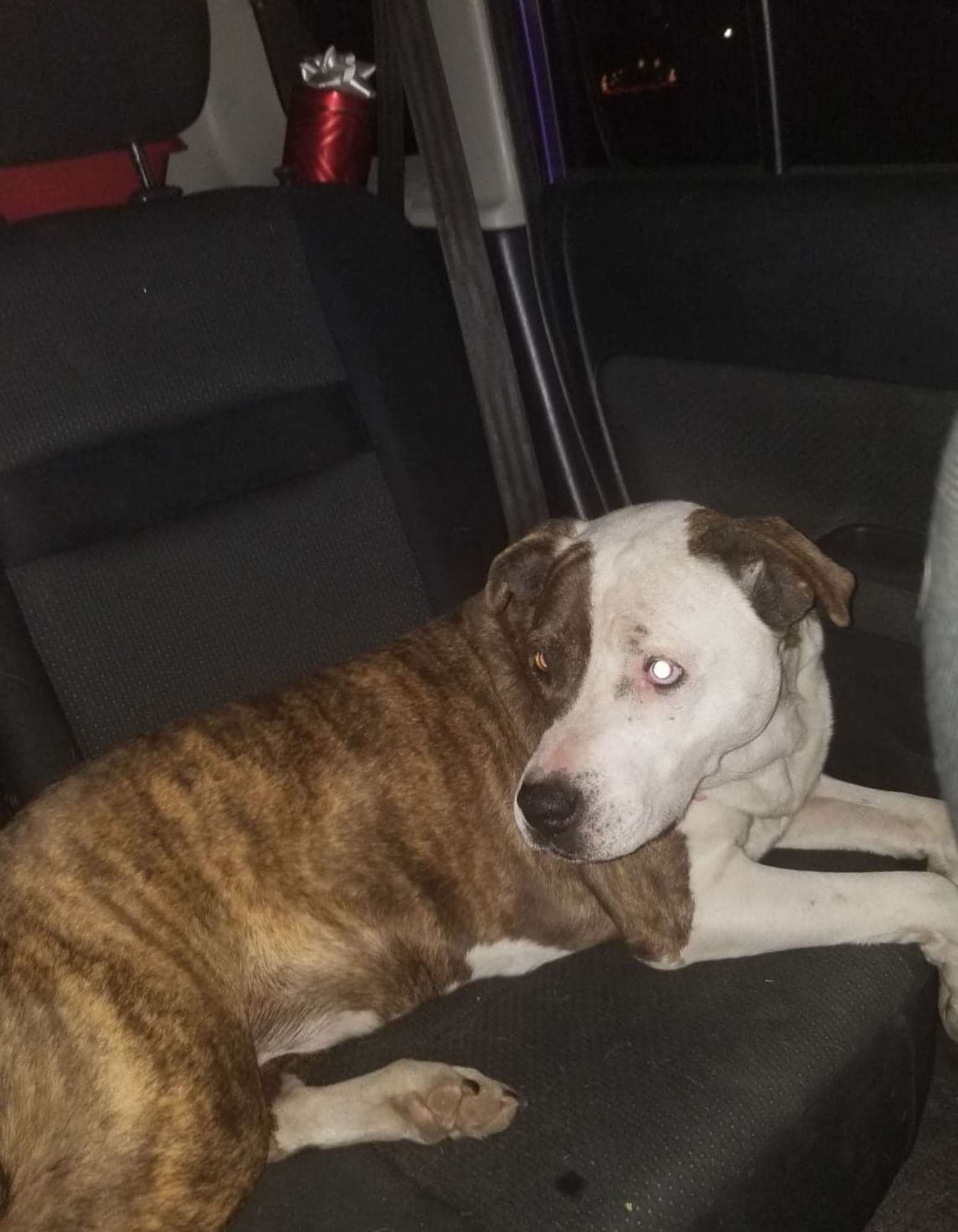 Seeing the state that Blake was in, the Hansons feared the worst for sweet, clumsy Laila. Still, for years, Hanson continued to check the local shelters, hoping to see her face again.

What Hanson didn’t know was that Laila had a guardian angel looking out for her.

When Janice Rackley first spotted Laila in 2018, the dog was alone in a field, not much more than skin and bones. It was clear that she had been on her own for quite some time, unloved and uncared for.

Rackley knew she had to do something.

“She just needed help, and nobody was going to help her,” Rackley told The Dodo. “I just feel like I was there for a reason and that was to help her. She was dependent on me.” 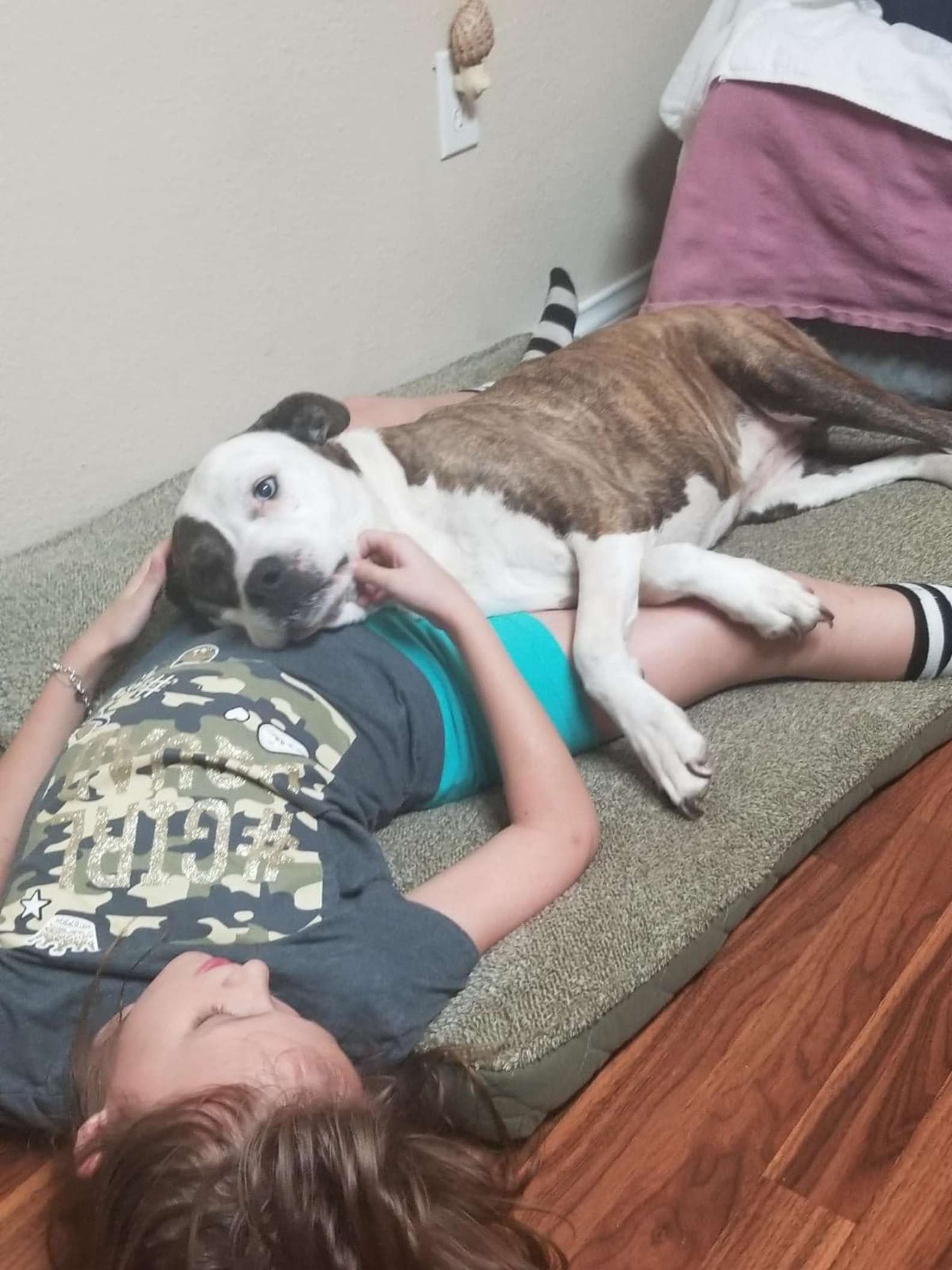 Every day, Rackley drove out to the field, lugging heavy jugs of water and food. At first, the dog was so terrified that she would run in the opposite direction as soon as she saw Rackley approaching — but, eventually, Rackley earned her trust.

“I think it was about six months in when she finally started coming closer and closer, and she finally let me pet her,” Rackley said. “So I thought, ‘Maybe I could grab a leash since she’s letting me pet her, and I can get the leash on while I’m feeding her.’ But whenever she would see this leash she would take off running.” 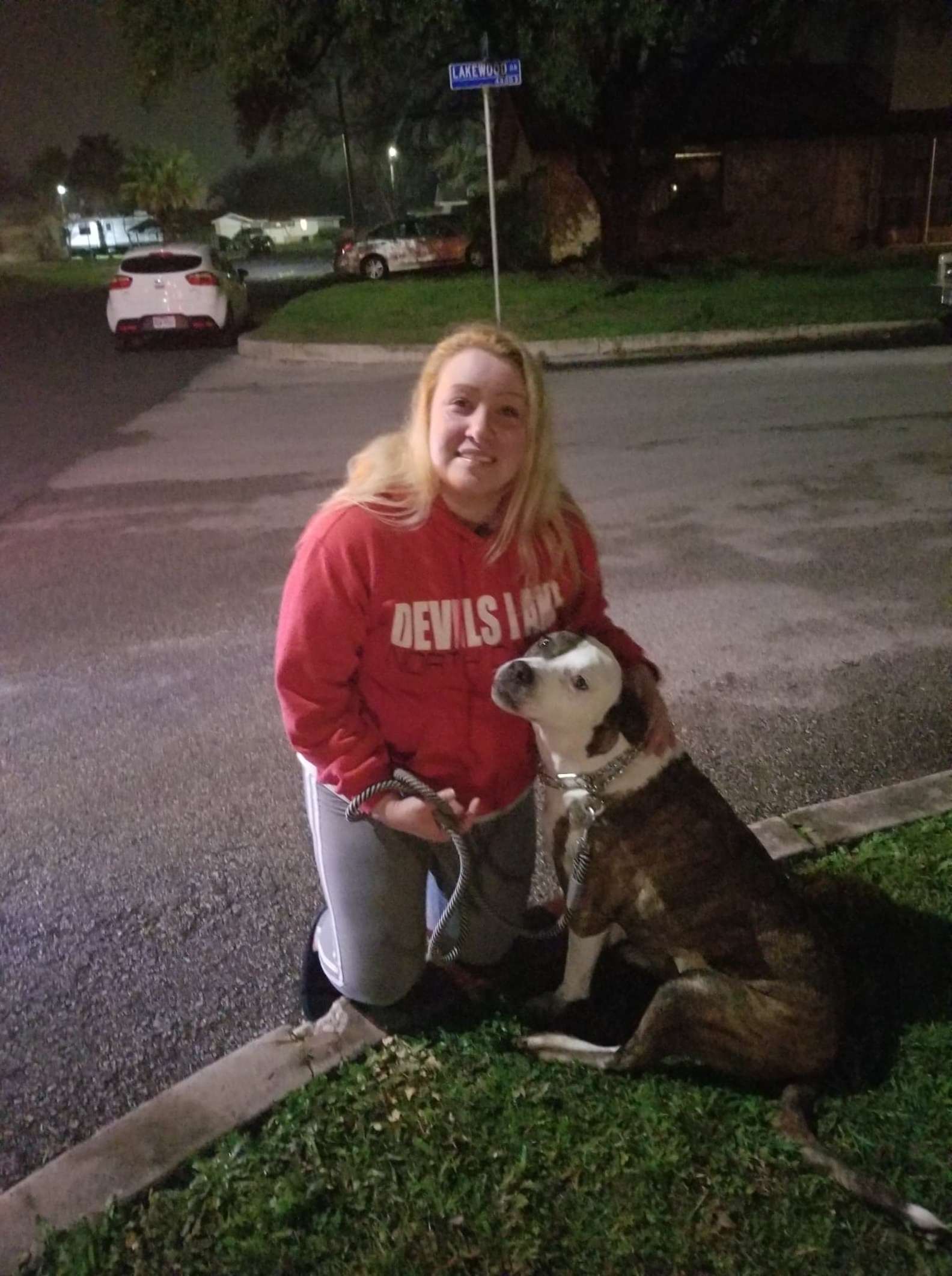 As New Year’s Eve approached and the weather turned cold, Rackley felt like it could be her last chance to rescue the dog — so she decided to do something rash. 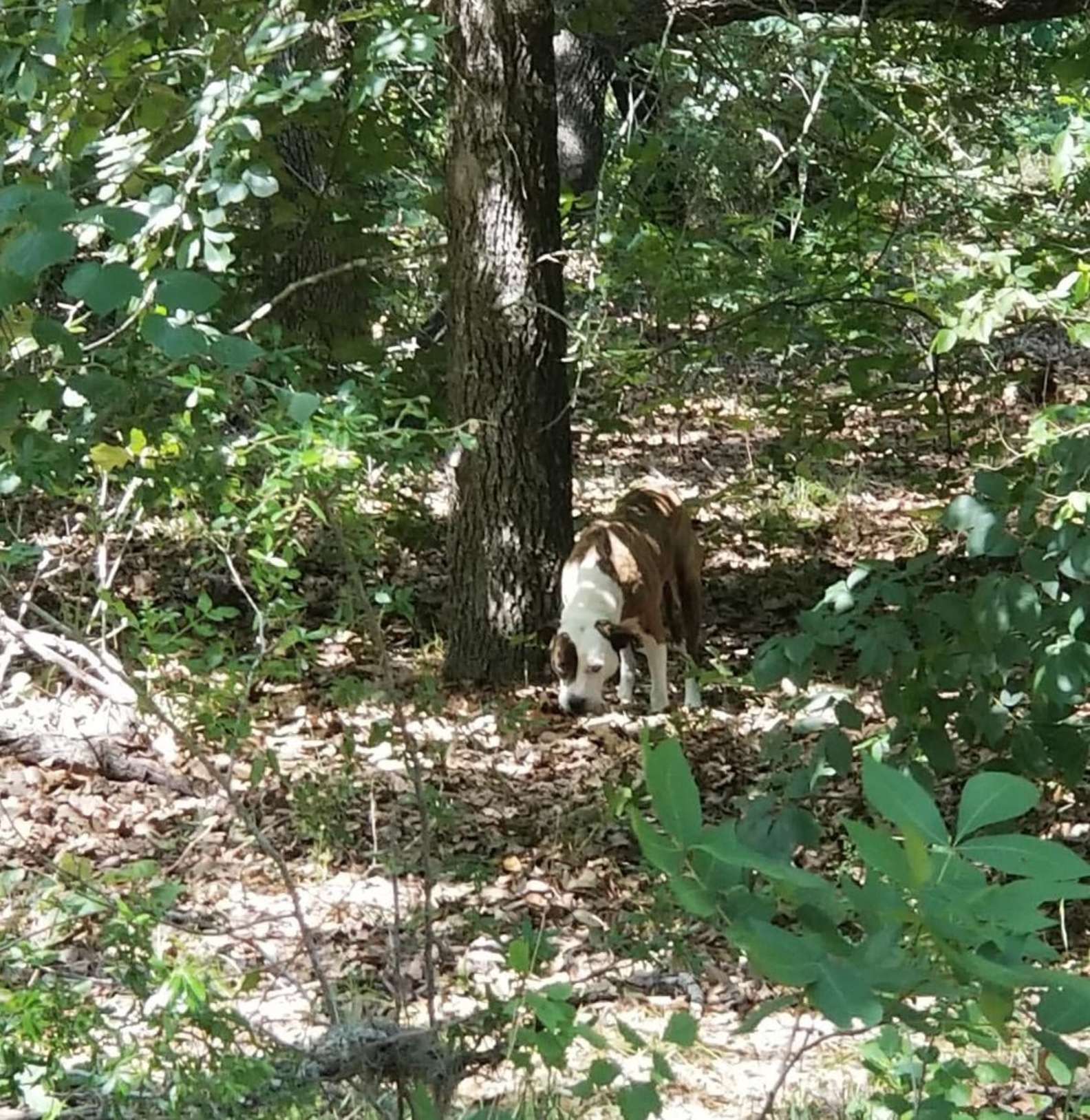 “I just picked her up, threw her over my shoulder and I walked her 40 feet through this field to get her to my car,” Rackley said. “She was actually very calm when I picked her up, she was so sweet about it.” 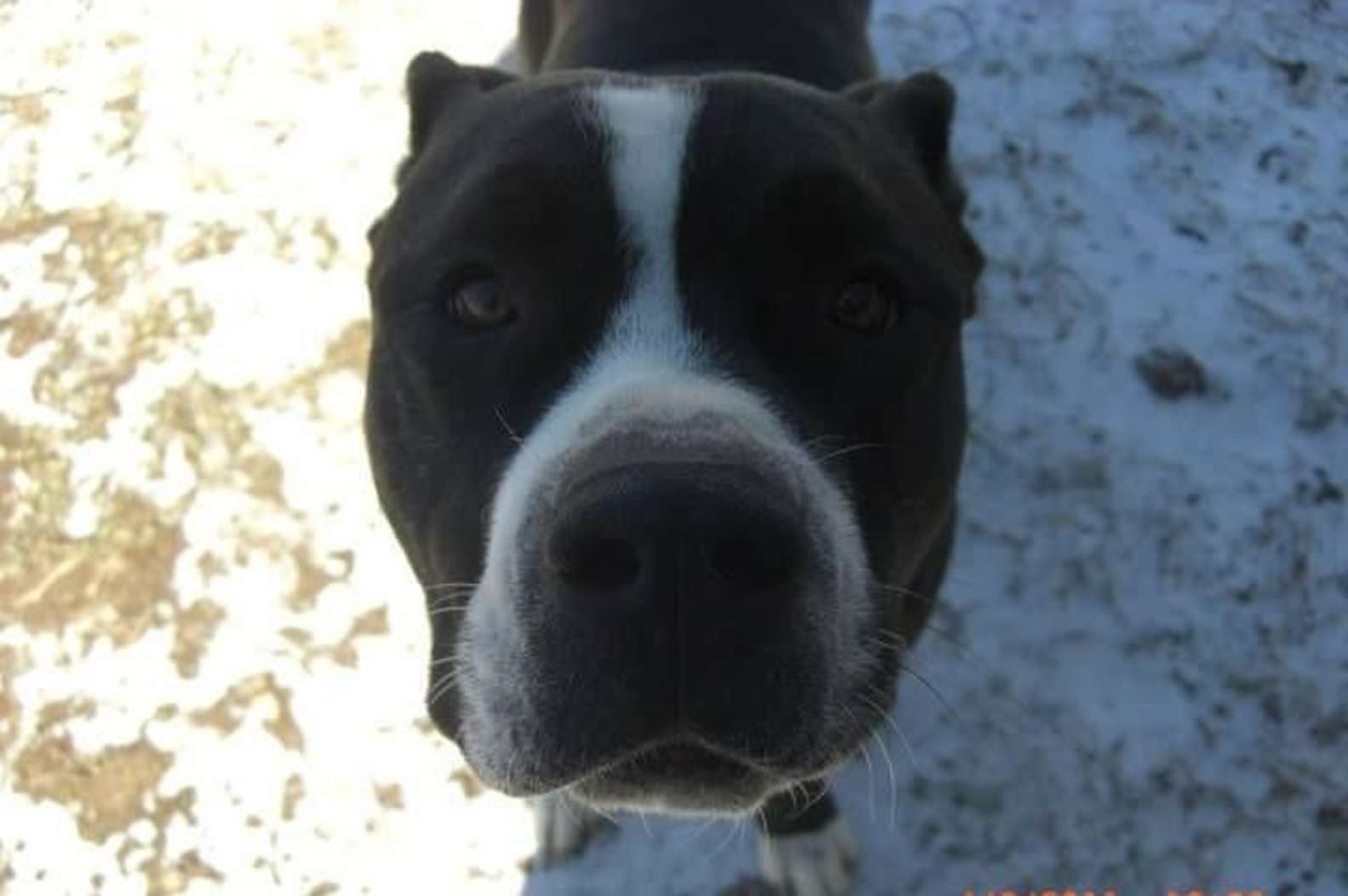 For a month, Laila refused to leave Rackley’s home. As her personality began to shine through, Rackley realized the stray dog’s past held more secrets than she had previously thought. 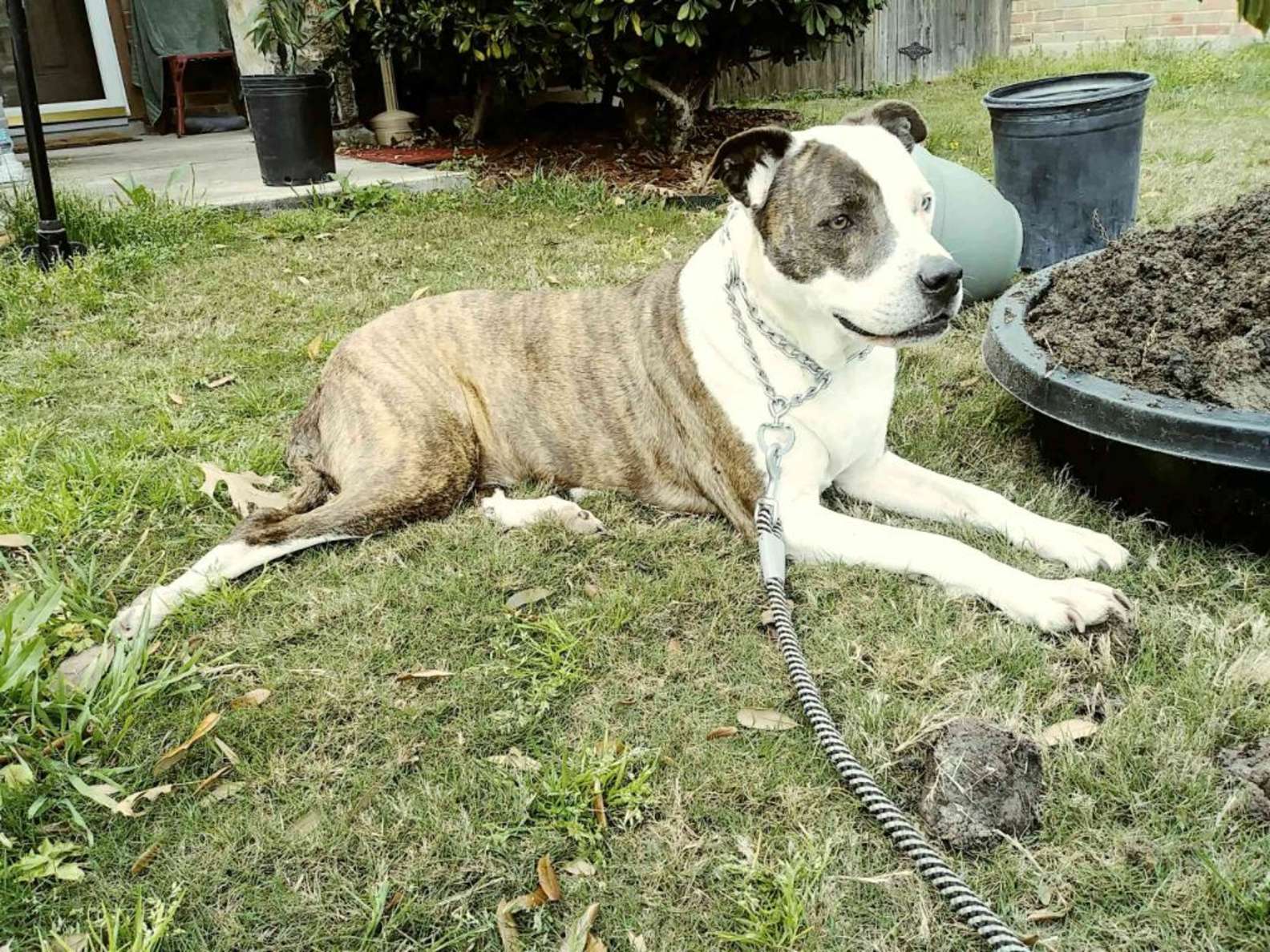 Rackley had Laila scanned by animal control and, sure enough, she had a microchip.

A mere 40 miles away, it was just another normal night for Hanson and her husband. “My husband and I were just walking around the house, turning lights off and making sure puppies were in bed,” Hanson said. “Just before we turned our light off, we got a call. My husband was like, ‘What?! Can you repeat that?’ And he put it on speaker phone and we were like, ‘No freakin’ way.’” 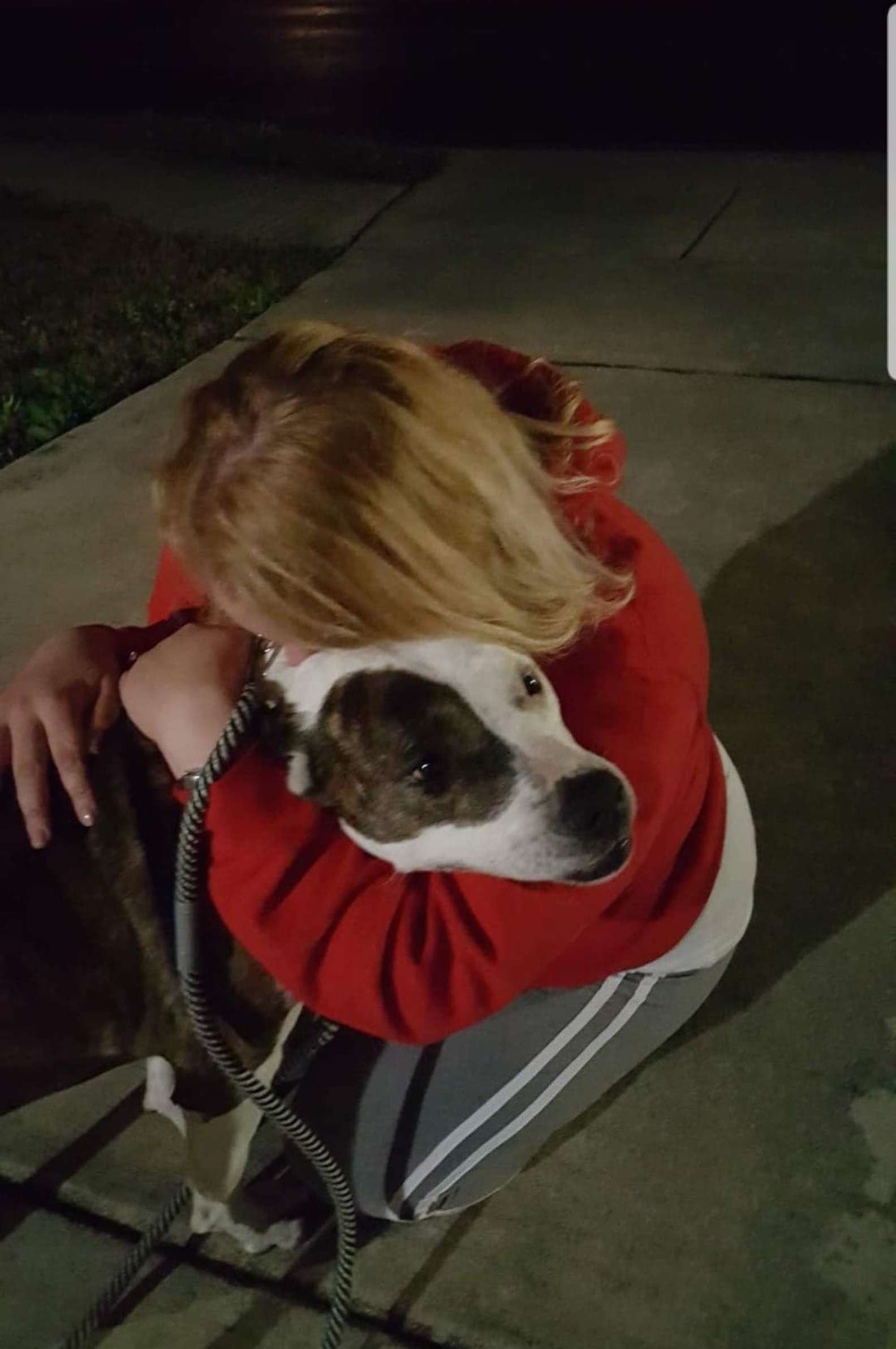 It may have been eight years, but Hanson couldn’t wait another minute to see Laila again, so she hopped in the car. When Rackley brought Laila outside, and she laid eyes on her mom, everyone present was moved by the emotional reunion. 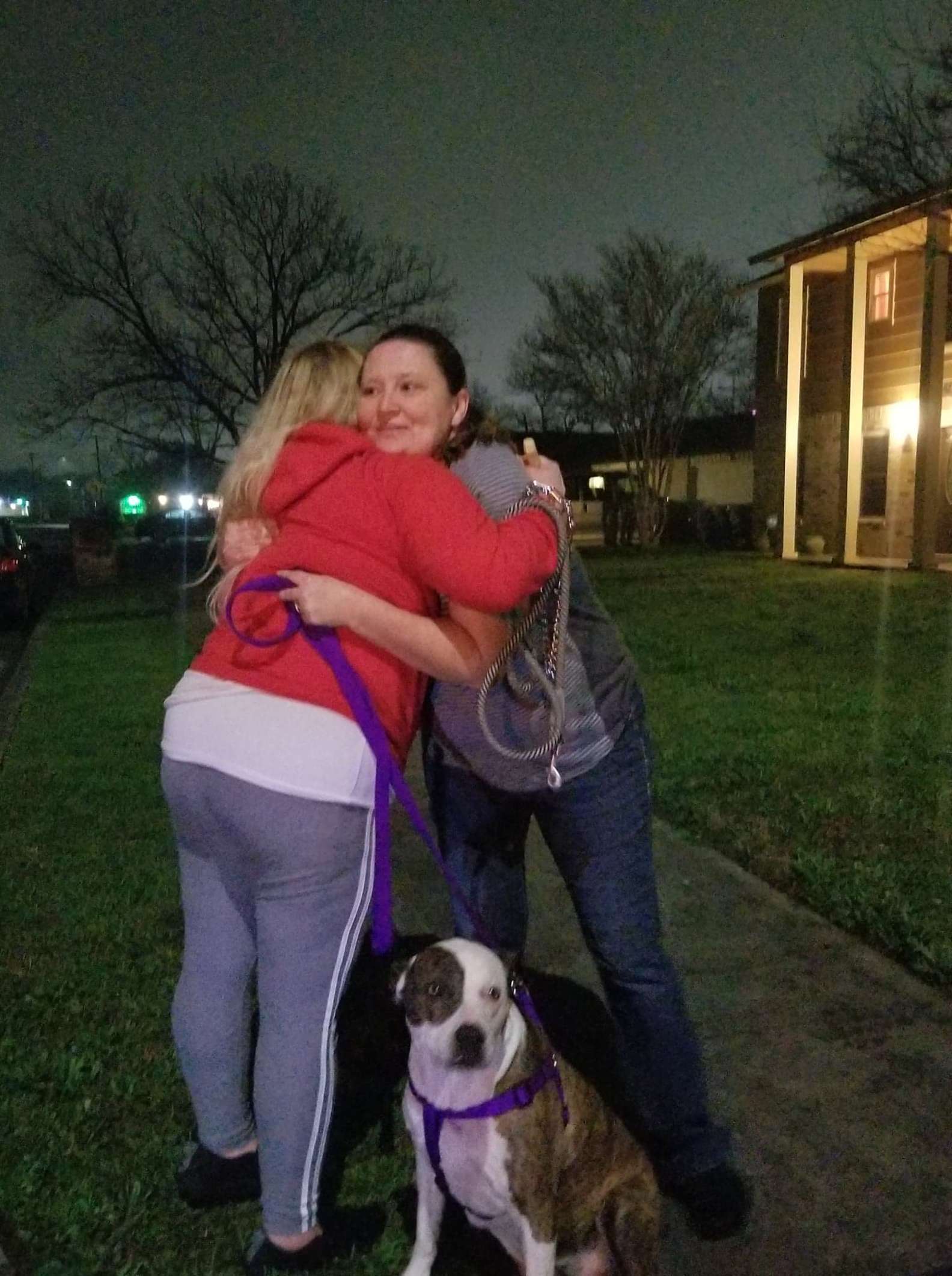 “She just responded to me right away, like, ‘Is that you?’” Hanson said. “And then, oh my God, everyone was crying and it was a mess.” 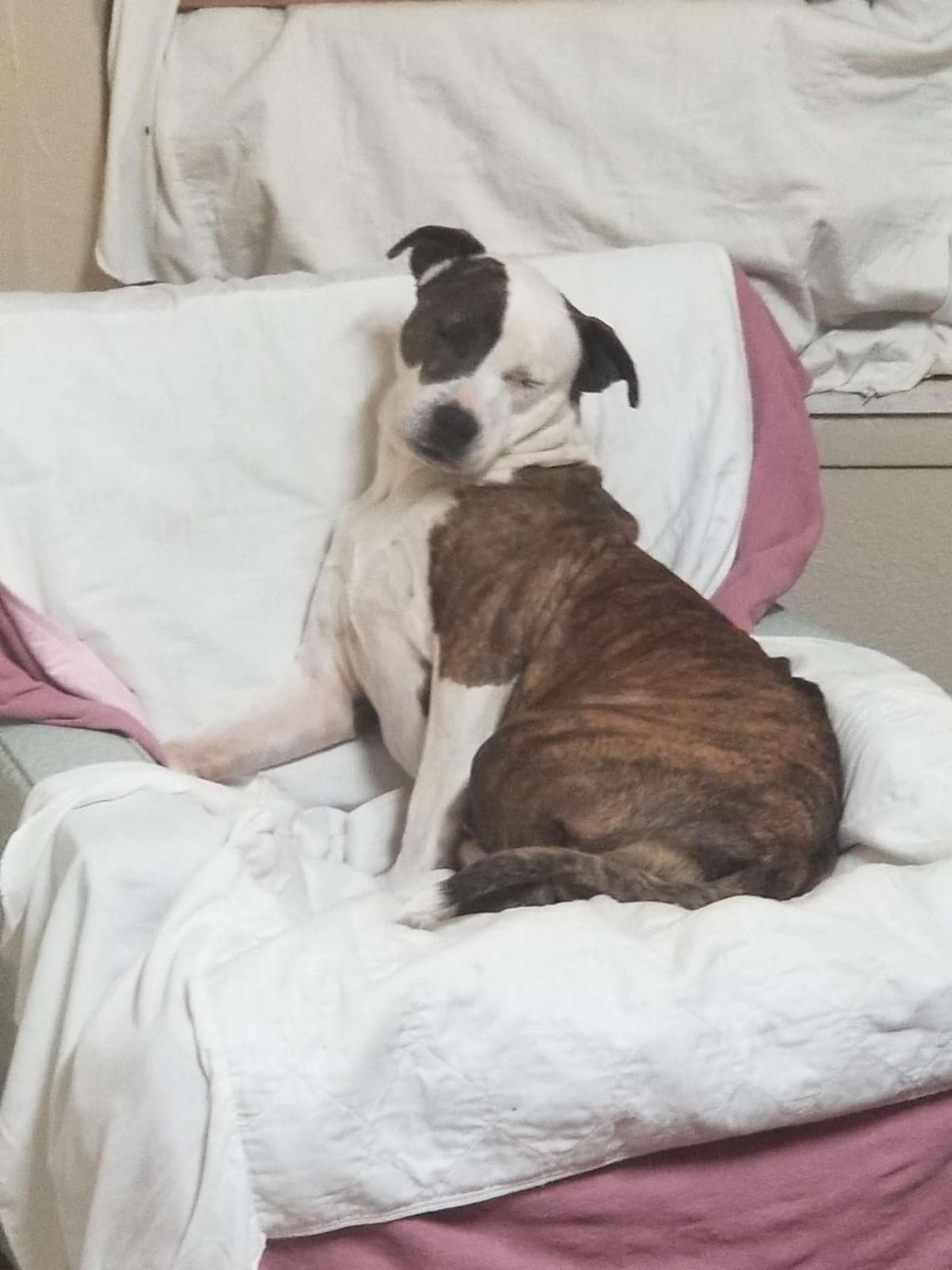 Though Laila had changed in so many ways, she made it clear to her parents that she remembered her old life.

“We used to call her Scooby Doo because she would make the craziest sounds that you’ve ever heard,” Hanson said. “My husband was like, ‘Scooby Doo! Scooby Doo!’ and she did it right away.”

Laila finally goes home after 8 years on the streets
SOPHIA HANSON
Now in a home with three other senior rescue dogs, including her brother Blake, Laila is taking her time to adjust to her new old life.

While she’s still wary around her new siblings, she couldn’t be happier to be home. And her parents are so grateful that their family is whole again. 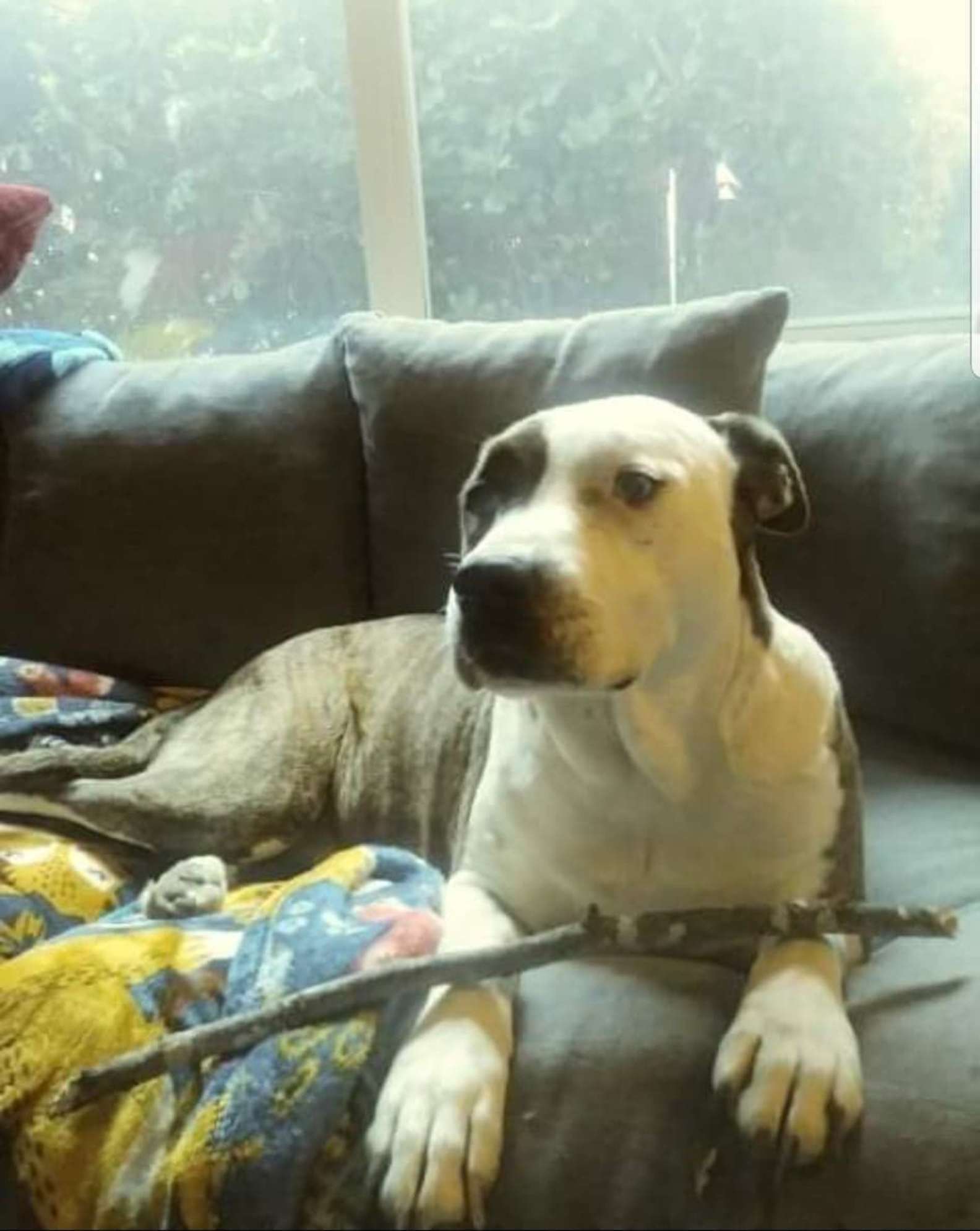 “We still can’t believe it,” Hanson said. “Sometimes we walk by her and we have to do a double take. It’s extremely surreal. She’s in the same chair, in the same spot, laying in her same silly upside-down position. And it’s just funny to see her so comfortable — I can’t even imagine what she’s been through.”