Adding a new baby to the family can always be nerve-wracking when pets are involved — but when Jenn Eckert had her daughter, Bailey, last June, she never could have dreamed how quickly her rabbits, Alfie and Amelia, would fall in love with her.

Upon their first meeting, there was no denying Alfie and Amelia loved their new baby sister. They stood tall next to the infant in her carrier at the hospital, with their large ears nearly as big as her. 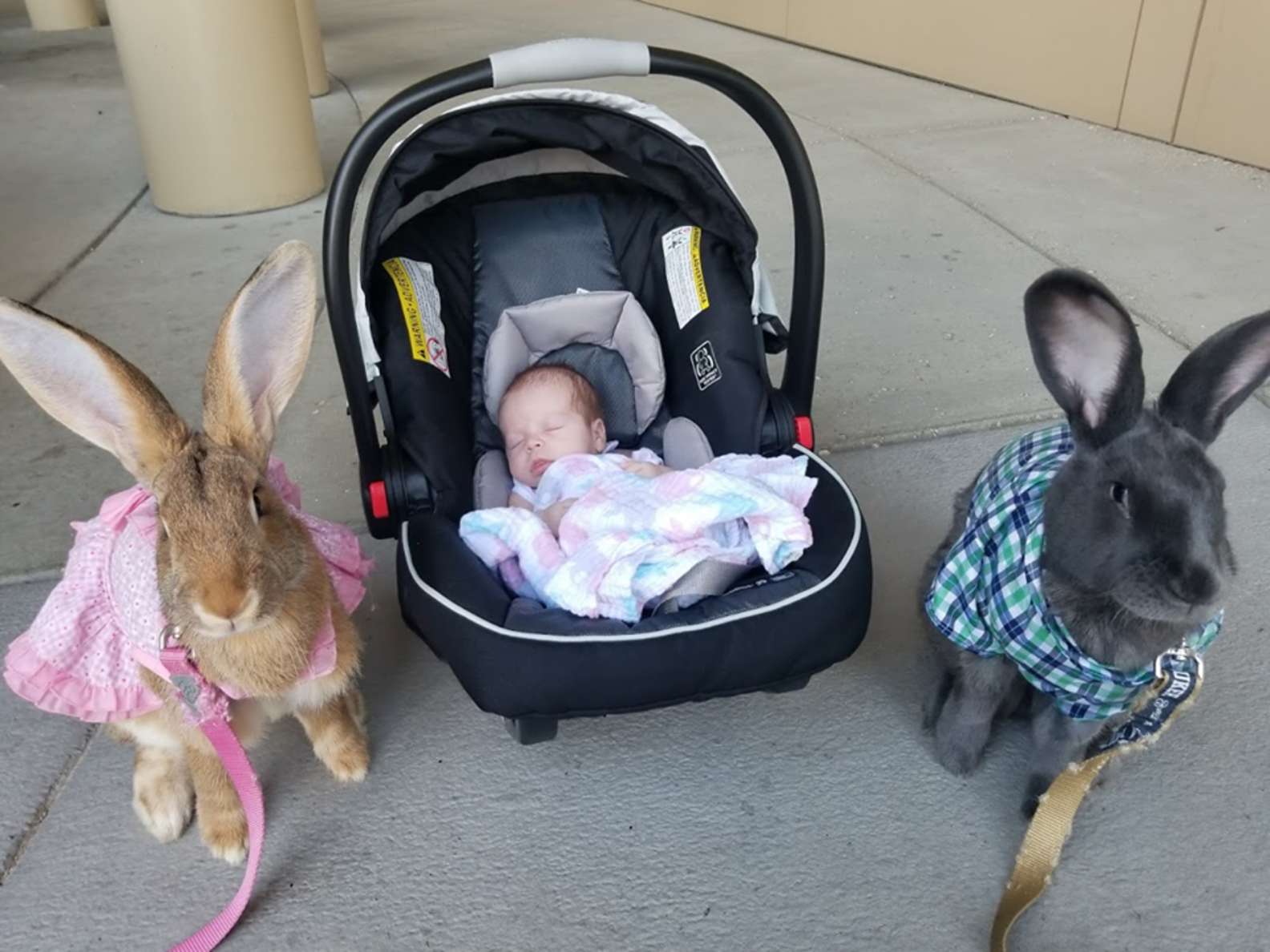 “Alfie tried to jump into the car seat, and Amelia just sniffed,” Eckert told The Dodo. “They were both so gentle, though, so I knew they would be best friends.”

Eckert was right. Though rabbits can sometimes be aloof, Alfie and Amelia, who live free-roam in the Wisconsin family’s home, made it clear right away that, when Bailey was in the room, nothing else mattered. 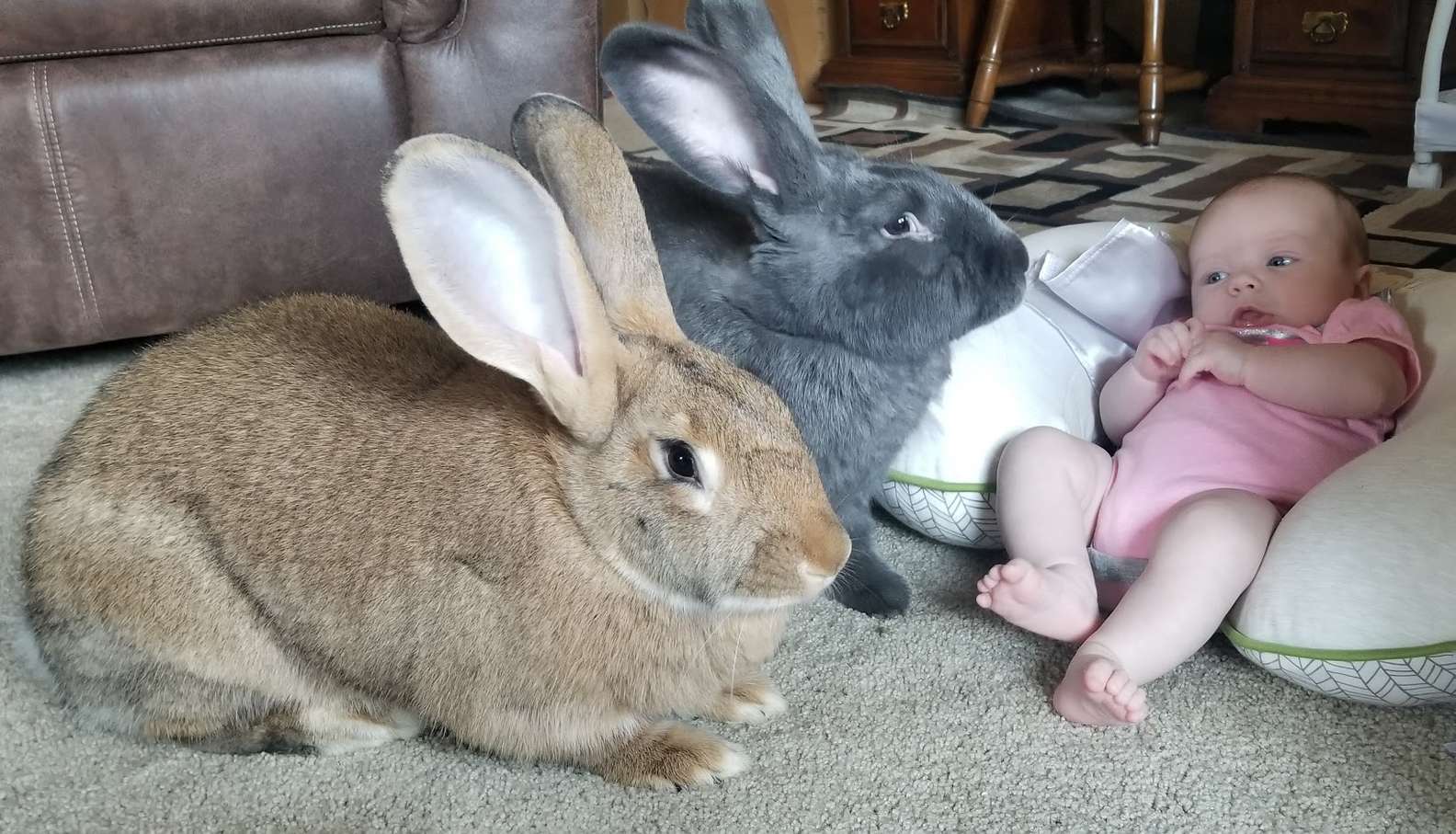 “She is always their center of attention,” Eckert said. “They will lay by her when she is sleeping. They tend to hover a bit, like they immediately saw her as their responsibility to protect.”

Since Bailey has been around rabbits her whole life, she loves them right back. She’ll often roll over to watch Alfie and Amelia when they come into the room, and also loves feeding them treats. The rabbits are both Flemish giants, who can weigh upwards of 20 pounds, so they’re the perfect-sized friends for her. 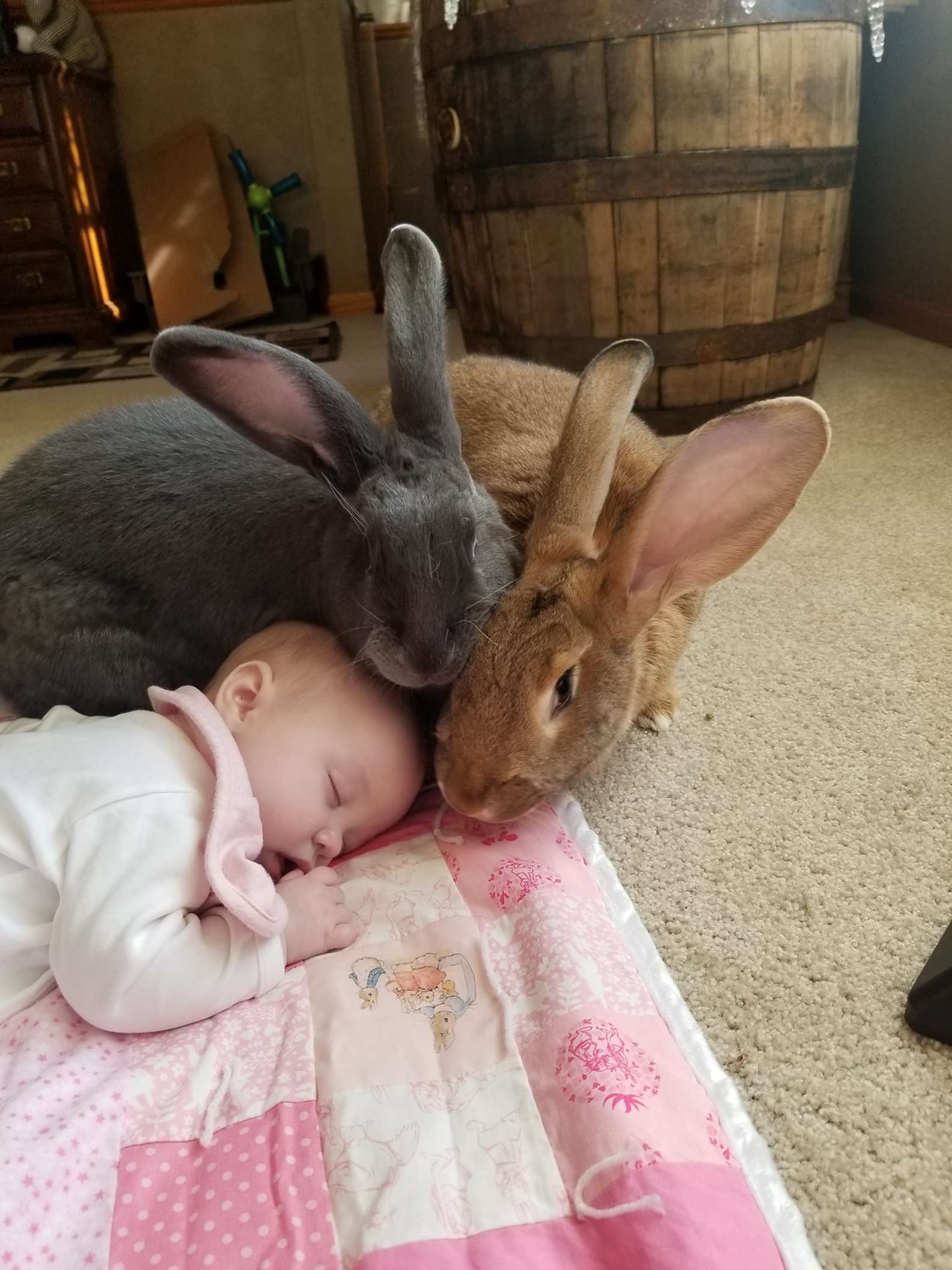 As Bailey gets older, she’ll have her family and the rabbits there every step of the way to teach her about the world. It seems Alfie and Amelia are teaching her a lot about kindness and respect already.

“They definitely are protective of Bailey,” Eckert said. “Alfie thumps if Bailey is crying. When Bailey is sleeping, both of them [keep] sniffing her to see if she is awake.” 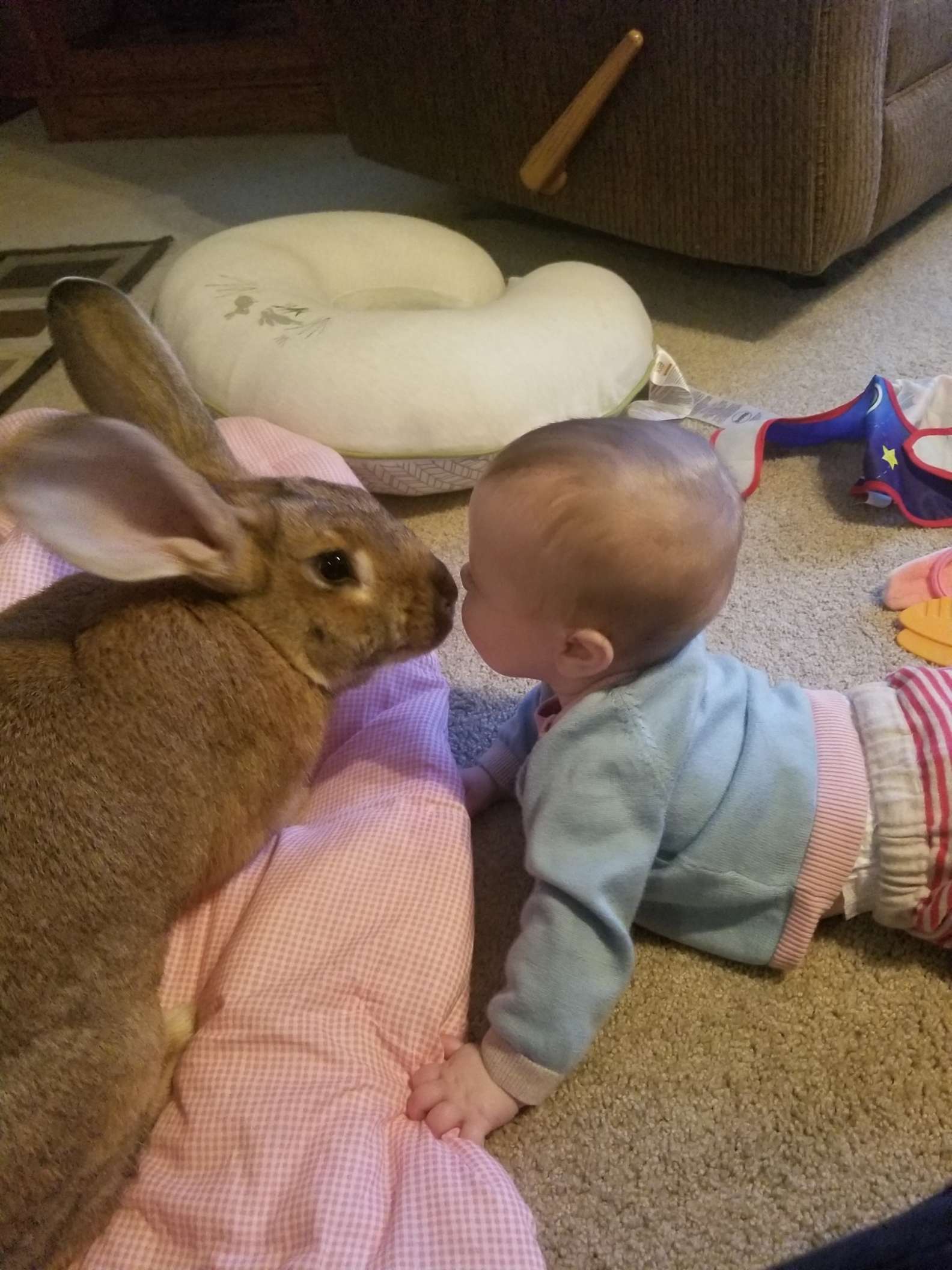 Unfortunately, many families rehome their rabbits because some people don’t believe they can coexist with kids. While children should always be supervised and gentle with rabbits, the animals can make wonderful companions for people of all ages and often have plenty of affection to offer their humans.

Because Alfie and Amelia are so gentle with Bailey, Eckert has begun training them as official therapy rabbits, working with an organization called Pet Partners. After they become certified, they’ll begin paying regular visits to hospitals and nursing homes to meet and snuggle with patients. 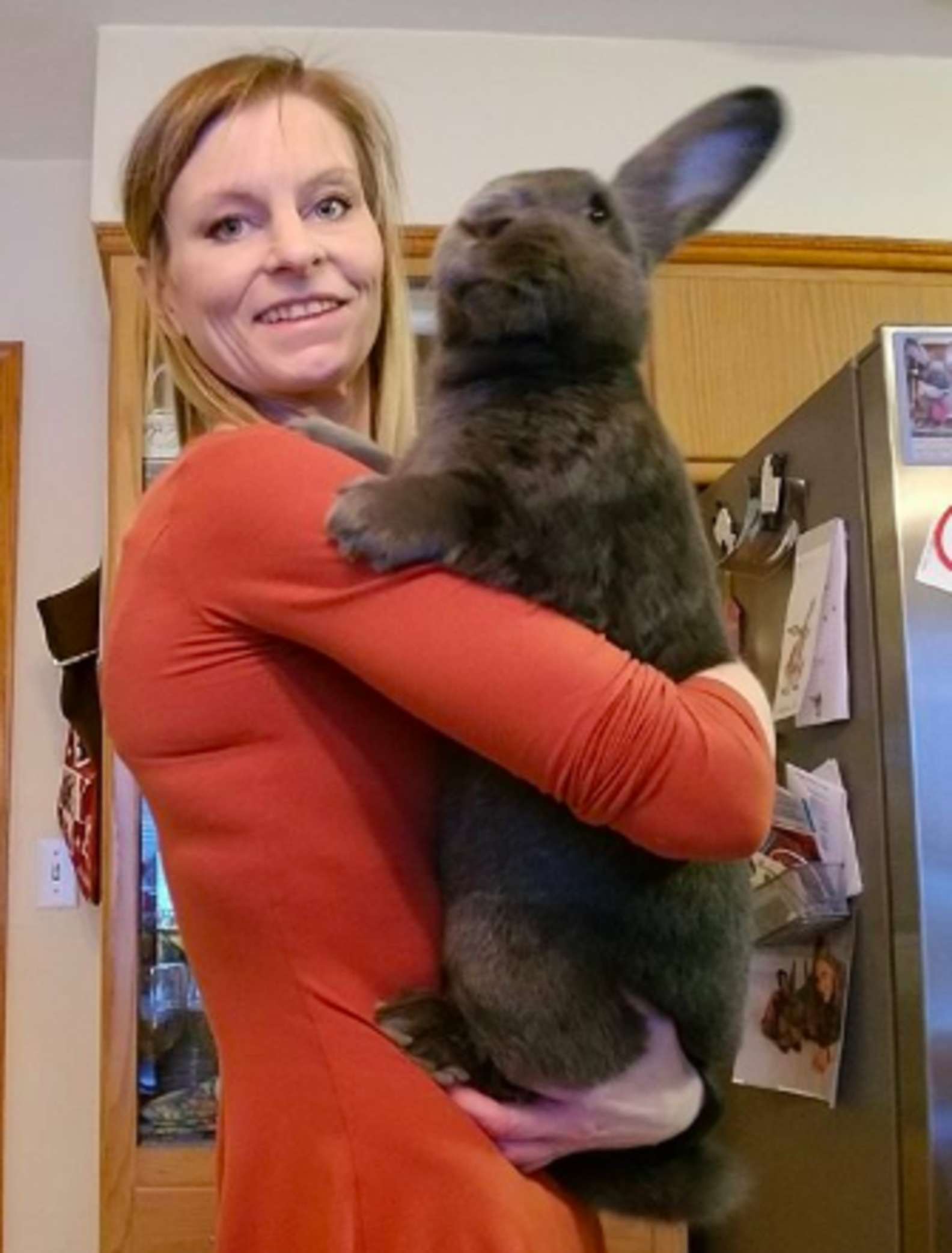 The pair get plenty of experience already at home, and they’ve been equally loving on practice runs at hospitals. Eckert regularly tracks their progress, both in their therapy work and their antics at home with Bailey, on a Facebook page called Rabbitat For Humanity.

“I think people are very curious [about them], as rabbits aren’t the first pet people would put with a baby,” Eckert said. “With Bailey, I now get to show people that just because you have a baby does not mean you can’t keep your rabbit. I continue to promote rabbit therapy, as it shows how great they can be with kids. It also gives me the opportunity to educate people about rabbit care — they aren’t just an animal you can put in a cage.” 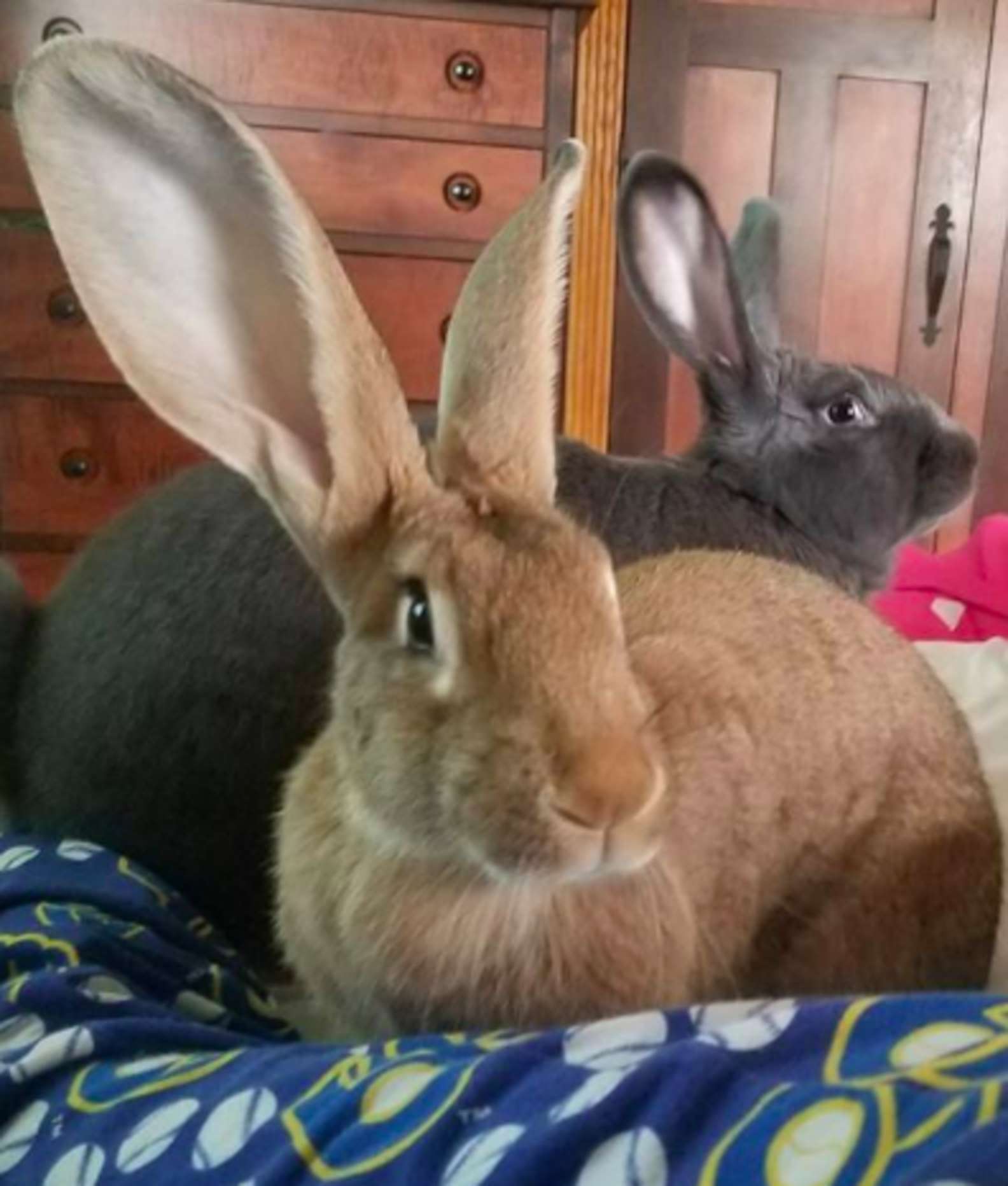 With a life span of over 10 years, rabbits are highly intelligent and create close bonds with their bunny partners and human families. Many bunnies, like Alfie and Amelia, have free rein of the house, which allows them a lot of exercise and socialization.

Though, as prey animals, they usually don’t like being picked up, they’re often happy to sit next to their humans and accept treats or pets. “They are such gentle animals by nature, and can be less intimidating to a child because they don’t bark,” Eckert said. 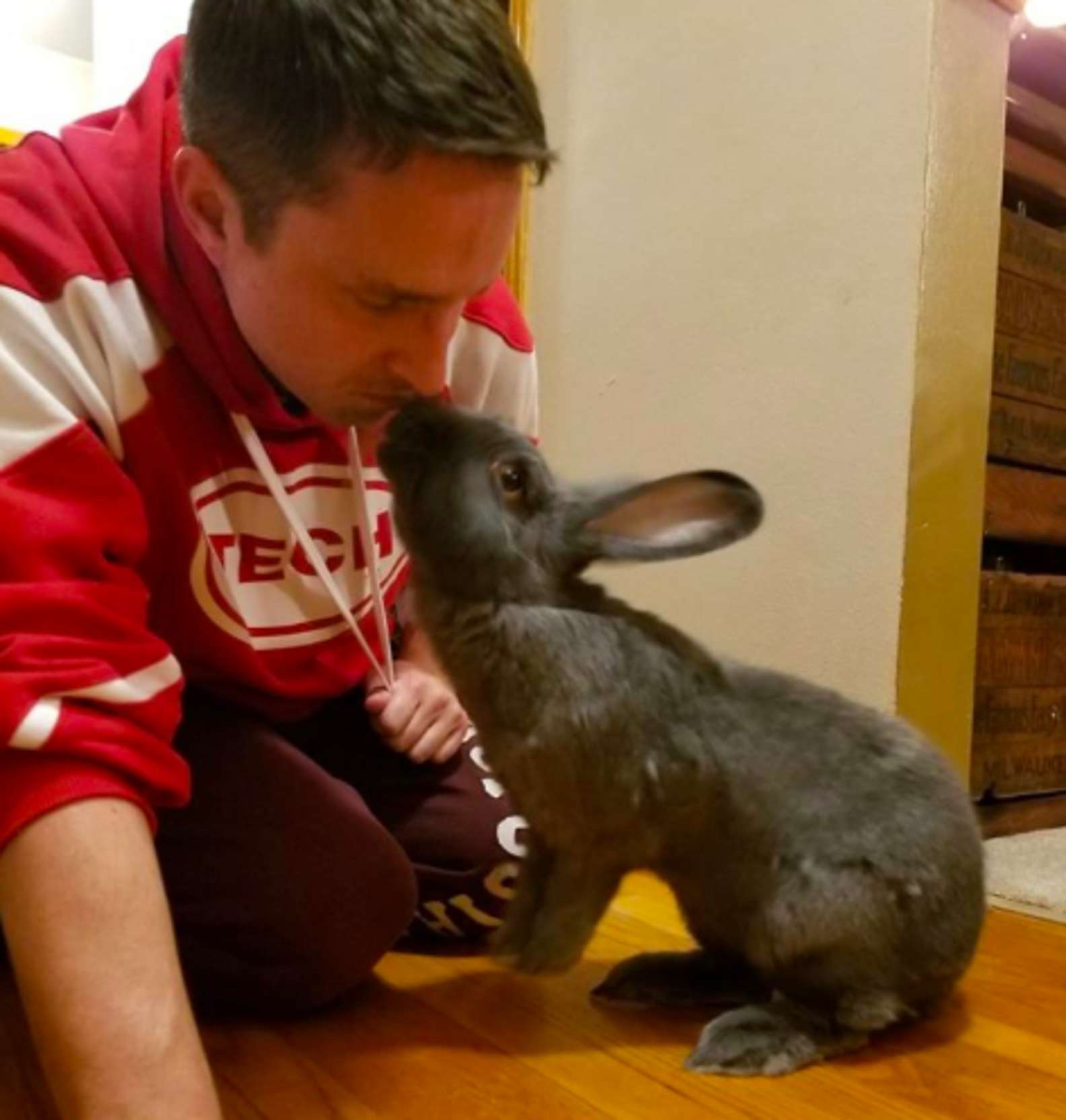 Eckert first fell in love with giant rabbits about five years ago, when her husband brought a female Flemish giant named Betsy home as a pet. Betsy became the greatest companion and support for Eckert, who had just lost her mother at the time. The family adopted a rabbit named Walter soon after, and Eckert began training both of them as certified therapy rabbits.

The spirit of Betsy and Walter lives on in young Alfie and Amelia as they introduce people to the joy of house and therapy rabbits. Their little sister, Bailey, was one of their first “patients” — and it’s clear they’ll always love her just a bit more. 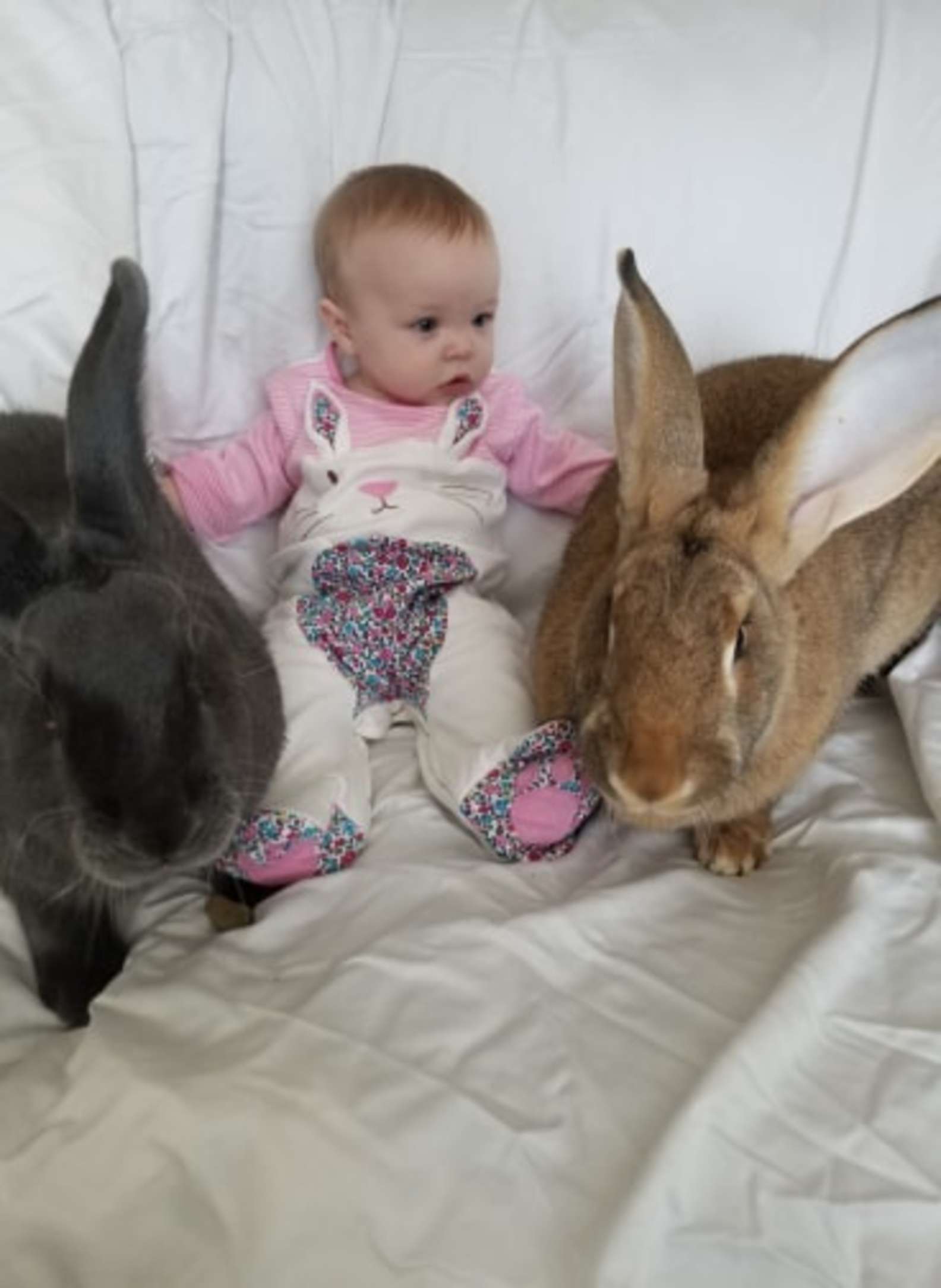 “The rabbits have always been my babies, so watching how they immediately responded was amazing, and watching the bond grow as they interact more really is a beautiful sight,” Eckert said. “With Bailey still so young, all three are completely dependent on us for food, a safe place to sleep, love, etc. … I think in a lot of respects, they recognize that. It is like they have their own little language.”