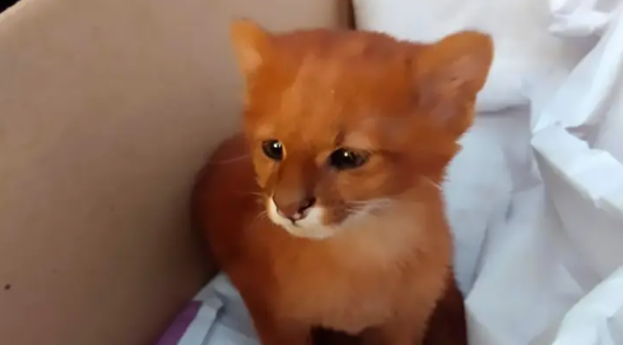 A cute ‘abandoned kitten’ discovered by a pair of Argentine teenagers while they were out fishing turned out to actually be a Jaguarundi wild cat.Wild cat or not, it’s bloody adorable. Check him out.

According to reports in the local press, Florencia Lobos, an 18-year-old from Santa Rosa de Leales in Argentina’s Tucuman province, discovered two cats in a cave near to the river they were fishing in.

The two young cats had lost their mother, so Florencia and her brother brought them home to care for them.

They named them Dani and Tito and, whilst Tito sadly died shortly afterwards, Dani went from strength to strength.

Eventually, the kitten got a leg injury and had to be taken to the vet. At that point, Florencia was shocked to discover that Dani was, in fact, a Jaguarundi cub.

The Jaguarundi is similar to a puma and is found in North and South America. Unlike the cats that people keep as pets, these Amazonian wildcats are anything but tame.

They’re quite closely related to the cheetah and the cougar, which aren’t exactly the kind of cuddly critters you’d fancy having on the sofa with you.

Anyway, as well as not wanting to deprive a wild creature of a natural existence, it turned out that Florencia was unable to pay for Dani’s leg surgery.

With that in mind, she contacted the Argentine Animal Rescue Foundation with the hope that they’d be able to help out.

The president of the non-governmental organisation, Hernan Rodriguez Salazar, explained: “Fortunately, she called us and gave us the animal because she realised it would not be suitable for her home. We took it to a vet who works with us.”

Yeah, if you take one lesson away from this article, let it be this – don’t open up your home to dangerous animals. Particularly wild cats, that won’t end well.

Luckily for all concerned in this story, everything worked out for the best.

Dani was taken away to a protected nature reserve not so far away in order to give a bit of time for his leg to completely recover, according to Salazar.

As for Florencia, she said that she was left ‘shocked’ when she discovered that her playful kitten friend was, in reality, a wild cat.

However, she remains in contact with the foundation and is kept up to date on Dani’s condition at regular intervals.

She also plans to visit the cub in future. Florencia said: “I feel he will be sad without me.”