When Wally first arrived at the Town of Islip Animal Shelter, everyone could tell he’d had a hard life. He came in as a stray and was somewhere around 10 years old, and it was clear he’d probably lived outside for most of his life. Despite everything he’d been through, all Wally wanted from the very beginning was someone to love him, and his new shelter friends immediately sprung into action to give him all the love and attention he’d been missing. 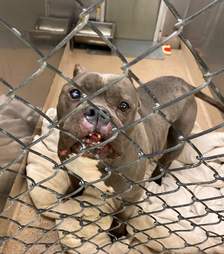 Wally had a severe skin infection and was blind in one eye, in addition to some other medical issues, and he definitely looked a little different. His new friends were worried his unique look might scare away potential families, but they hoped that everyone else would be able to see the wonderful dog that they’d quickly fallen in love with. “He loves to slobber on you and will do anything for some food,” Danielle Gorle, a veterinary technician at the Town of Islip Animal Shelter, told The Dodo. “He also likes to just hang out and not do anything.” 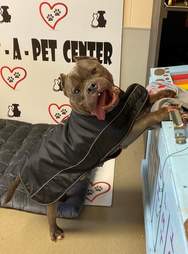 Wally has so much love to give and just wants to find a family to share it with — but unfortunately, it’s been over a year, and the sweet dog is still waiting at the shelter. As a senior dog, Wally just wants somewhere to live out his golden years in peace, and his rescuers are hoping they can find him a forever family as soon as possible, as shelter life is starting to take its toll on him. 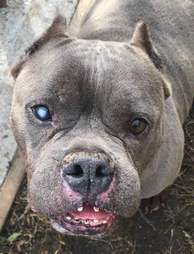 “He seems to be declining,” Gorle said. “He was happier when he first came in. He likes when he gets to go out but he seems depressed in his kennel.”

Wally would do best in a quiet home with no stairs, no kids under the age of 15 and no other pets. He also needs a family who understands his medical needs — but other than that, all Wally needs is love, and he’ll give it all right back to you in return. 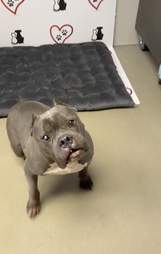 Wally had a rough start to life, and now all he wants is to snuggle up with a family who loves him for the rest of his days. 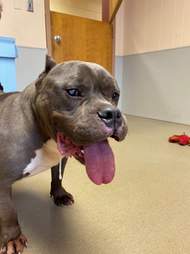