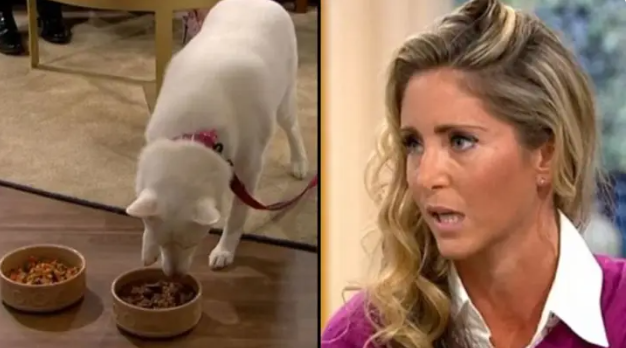 It’s a basic rule of pet ownership that the animals begin to resemble their owners after a while. However, it’s a bit much to expect your dog to follow your dietary habits.

Dogs will eat pretty much anything: mine likes socks, grass, his own tail and pig lungs. So when a woman appeared on This Morning to claim that her pup was a vegetarian… well, you can imagine how it went.

Lucy Carrington was on the sofa with Eamonn Holmes and Ruth Langsford to claim that her dog preferred to eat veggies rather than meat – only for the hosts to create a little test.

Storm the Husky was presented with a portion of meat and a portion of vegetables and given his pick – which, obviously, because she’s a dog, was the meat. He barely glanced at the veggies.

Lucy the owner was somewhat taken aback by her dog’s decision, exclaiming: “Oh you little…I didn’t swear. In fairness the weather has cooled down quite dramatically.”

She had previously stated that her dog had made the switch to vegetables because of the warm weather. Ironically, Lucy herself is not a veggie.

A vet on the show was on hand to explain that dogs are omnivores and therefore can eat both meat and veg, and thus should be given both.

Technically an omnivore is a creature that eats everything, which might be the perfect description for dogs, as they’ll eat literally everything you put in front of them, regardless of how sick it makes them.

“She seemed to perk up, be a lot happier. She really took to it,” said Lucy after the test. “If this is what she wants then obviously I’m going to adapt accordingly.”

Some owners have made their dogs vegetarian, and studies have shown that they can get sufficient levels of nutrition from such a diet, though whether the dogs themselves prefer it is less clear.

I can’t speak scientifically, but my pup will eat literally anything other than vegetables, which he’ll only touch if you hide them in his meat.

Perhaps I should up his veggie intake by stuffing cucumbers in my socks, given how much he loves eating them.